At least 26 CIA detainees “were wrongfully held”: On Tuesday, a long-delayed report on the CIA’s secret interrogation program was released by the Senate Select Committee on Intelligence. Or, to be more precise, an extract was released — the full report is more than 6,000 pages long, but the committee voted in April to declassify only the 524-page executive summary, along with a rebuttal by Republican members. The redacted report still offers ample insight into the CIA’s treatment of detainees suspected of ties to terrorism.

Journalists at The New York Times summarized seven key points of the report, including the revelation that the agency had detained 119 individuals through the interrogation program despite publicly claiming that there were “fewer than 100” detainees. At least 26 of those individuals were wrongfully held, according to the committee’s investigation. One of them was Nazir Ali, a man described in the report as “intellectually challenged.” The agency used recordings of Ali crying as leverage to get a family member to provide information.

An interactive produced by the Times explains the history of the secret program, and the chart reproduced below shows how long individuals were held and how many were subjected to torture between 2002 and 2007.

The Washington Post attempted to provide more information about the experiences of those 119 detainees using details from the report. 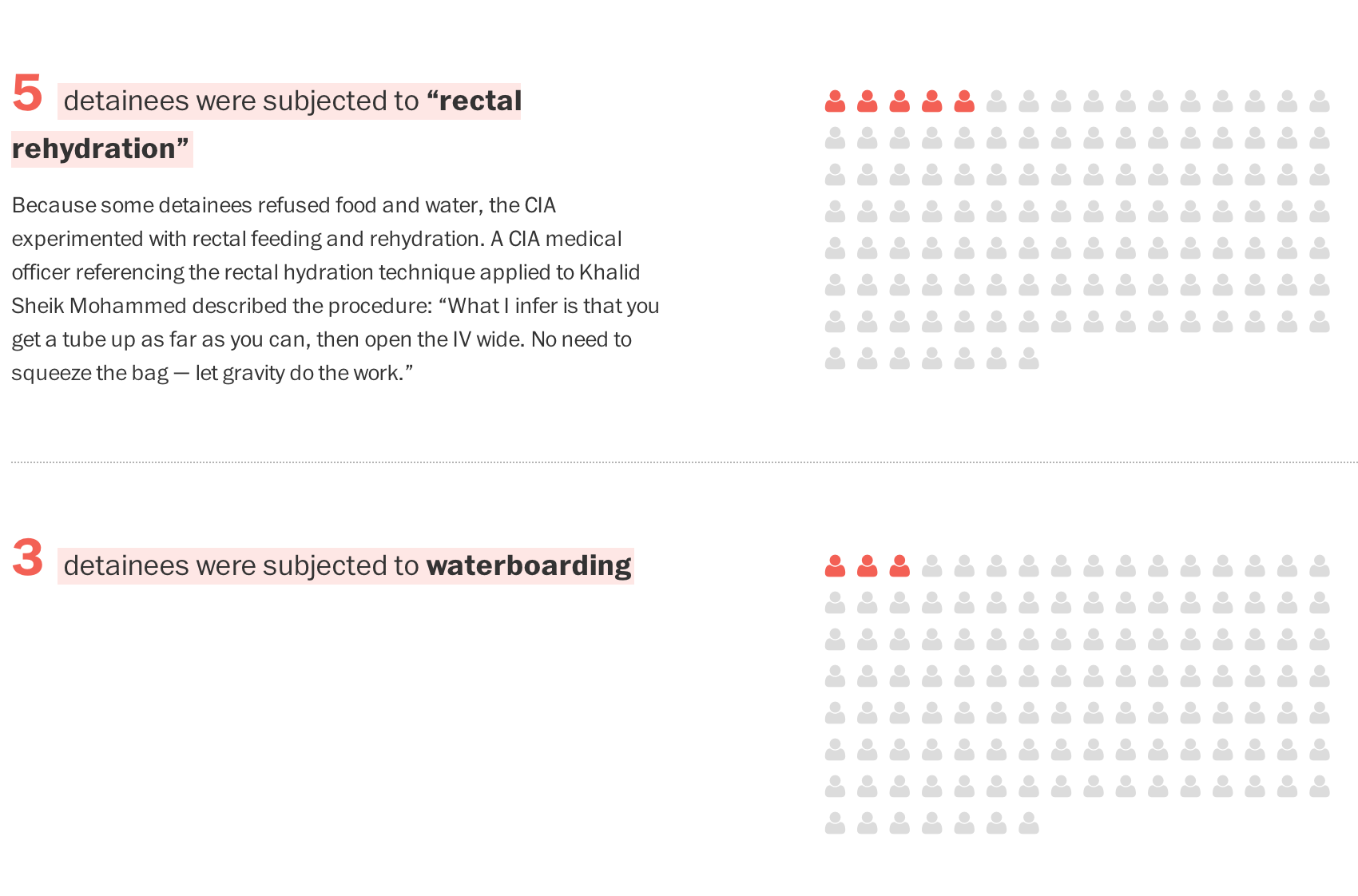 Campus rape statistics: Two different studies, one of which was released this week, point to very different numbers on the prevalence of rape on college campuses. Dana Goldstein at the Marshall Project picked apart the research to understand which statistic is closer to the mark — one in 100 college women is sexually assaulted, or one in five. Describing how each study differs in its choice of methodology, Goldstein explained why the statistics diverge so much.

Jihadism: The BBC explored Jihadist activities in the month of November by working with researchers at Kings College London. Their data maps where attacks took place in the five worst-affected countries (Afghanistan, Iraq, Nigeria, Pakistan and Syria), how many deaths were caused and which groups were responsible. 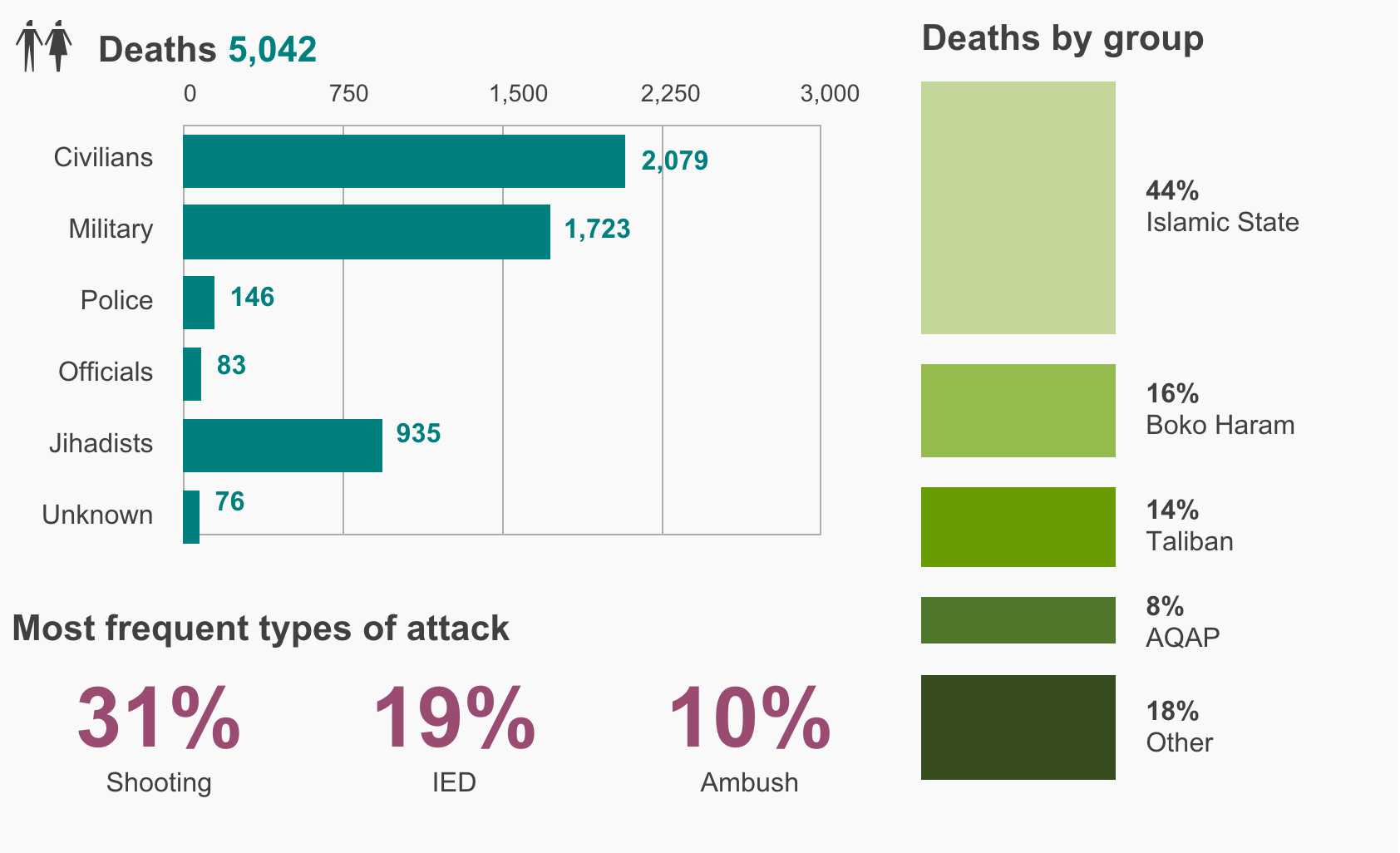 Persuading the polls: A study released this week in the academic journal Science found that just 20 minutes of conversation with a gay individual significantly influenced people’s opinions on gay marriage. Writing in New York magazine, Jesse Singal describes the methods used in the study and how its conclusions relate to other research showing that interacting with the unknown can affect levels of trust and feelings toward certain groups (known as the “contact hypothesis”).

5,601 complaints of police wrongdoing: Using data published by the New York Police Department, Michael Keller at Al Jazeera America notes the 150 percent rise in complaints against the department since 2006. The claim categories are varied — they include “defective sidewalk” and “civil rights” — but Keller separates them out and looks at judgments and any dollar settlements made for each.

Bad girls?: Tanzina Vega at The New York Times used data from the U.S. Department of Education’s Office for Civil Rights to look at the way school discipline may be disproportionately affecting black girls (a bias against black boys has also been demonstrated). Vega found that from 2011 to 2012, “black girls in public elementary and secondary schools nationwide were suspended at a rate of 12 percent, compared with a rate of just 2 percent for white girls, and more than girls of any other race or ethnicity.”

The end of the year is fast approaching and we’ll be taking a look at the best data journalism of 2014. You can contribute by sending your picks to DataLab@fivethirtyeight.com.