Remember the Seattle Seahawks? For all 137.6 decibels of noise at CenturyLink Field, they’ve been relatively quiet this year. The Seahawks have been one of the most consistent teams in the NFL, rarely blowing anybody out and rarely getting blown out.

Seattle’s 24-14 win in Philadelphia on Sunday was typical of its season. The Seahawks faced an excellent opponent — they’ve had one of the league’s tougher schedules — and they won clearly and cleanly, although not overwhelmingly. It was their sixth win in seven games. During that time, the Seahawks have gone from modest underdogs to make the playoffs to 94 percent favorites to do so.

Seattle has also nearly regained the top spot in FiveThirtyEight’s NFL Elo Ratings. The New England Patriots, who scored their own impressive victory over the San Diego Chargers, remain in No. 1, but it comes down to decimal points. The Patriots’ Elo rating is 1717.1; the Seahawks’ is 1716.6. The Denver Broncos remain in third and the Green Bay Packers in fourth.

But although the Seahawks’ playoff chances were once imperiled, the Elo ratings were never down on their quality. Seattle started the season at No. 1 and fell only as far as No. 3 in the league before moving back into a near-tie for first place. Seattle didn’t fall that far, in part, because Elo factors in a team’s preseason standing. (Preseason estimates are based on where the teams stood at the end of 2013.) 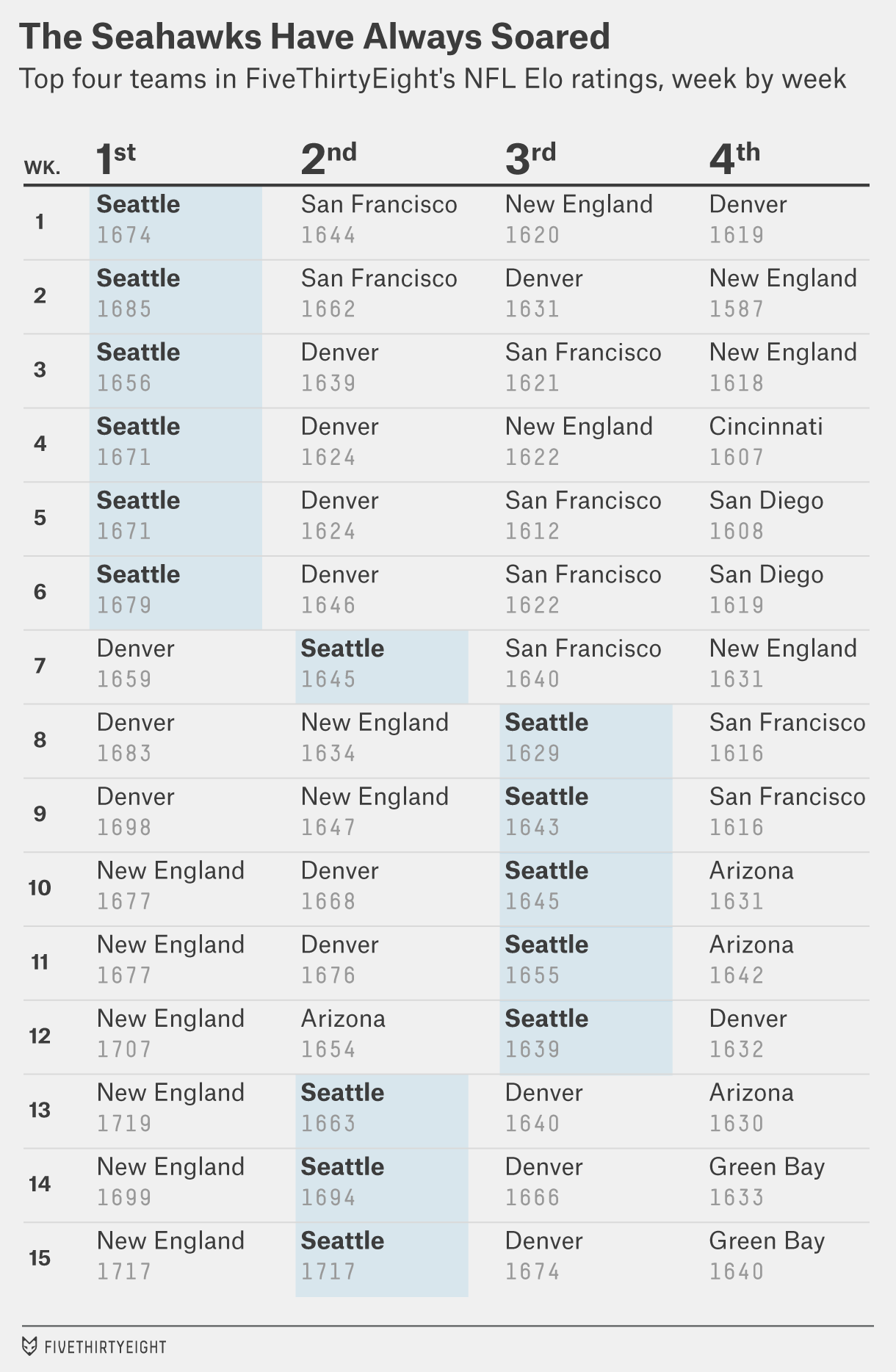 Meanwhile, teams that looked average to start the year before making a charge up the standings, such as the Dallas Cowboys and Kansas City Chiefs, have since fallen back into the middle of the pack. The only real exception has been the Packers, and Elo has a good excuse for them, because the system doesn’t account for the injury to Aaron Rodgers that harmed their 2013 performance and depressed their preseason rating.

The Seahawks still have some regular-season work left: They’d much rather enter the playoffs as division winner, which would allow them to play as many games as possible at CenturyLink Field and probably get a first-round bye. Our simulation has Seattle with a 23 percent chance of repeating as Super Bowl champions if they win the NFC West, but just a 10 percent shot if they enter the playoffs as a wild card team.

But Seattle’s situation is a little more favorable than it might appear from the NFC West standings. Although they’re a game behind the Arizona Cardinals, the Seahawks have beaten them once this season and will play them again Dec. 21. If Seattle wins that game, it’ll make up the game against Arizona and also clinch the head-to-head tiebreaker. Seattle rates as a slight favorite in that game even though it’s being played in Arizona, so it’s a slight favorite to win the division, too, per Elo.

Here are the playoff odds for the Seahawks and the other 31 NFL teams: 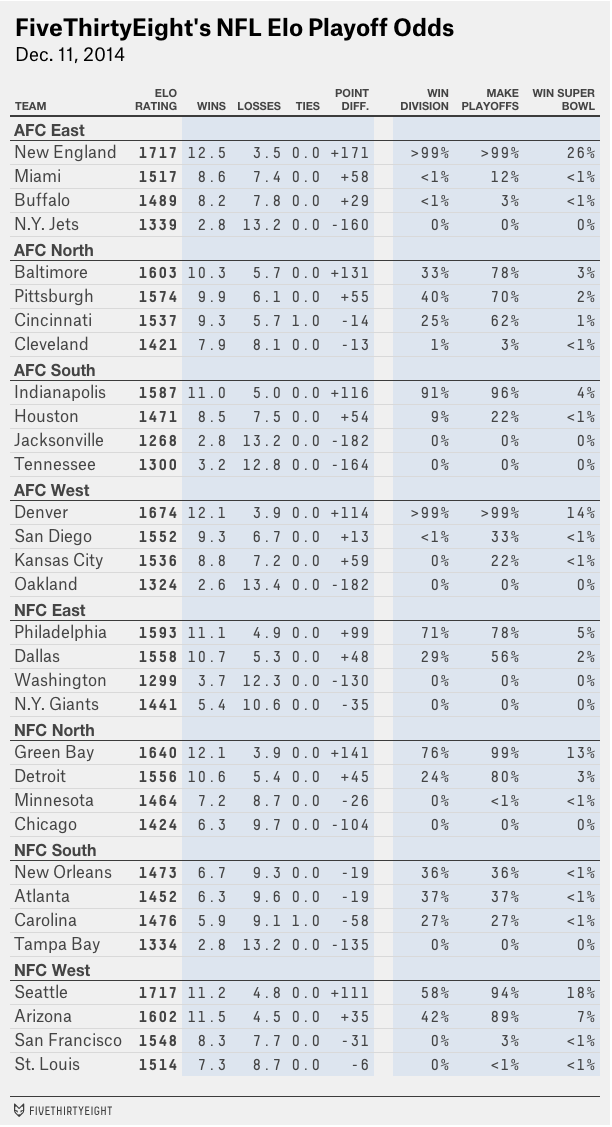 No team has clinched a playoff berth so far, although some are all but certain to make it. The Packers reached the playoffs in 98.7 percent of our simulations this week. And both the Broncos and the Patriots made it 99.9 percent of the time.

Some other team will make the playoffs in far less glorious fashion. The 5-8 Atlanta Falcons, 5-8 New Orleans Saints and 4-8-1 Carolina Panthers are still competing for the division title in the NFC South; the “champion” will not only make the playoffs, but host a home game. The best the NFC South champion can do is an 8-8 record; there’s a 31 percent chance of that, according to our simulations. There’s a 59 percent chance the division winner finishes with just seven wins, and a 10 percent chance they’ll have only six wins (either a 6-10 record or 6-9-1 in the case of Carolina). For the rundown on everyone else — including this week’s extremely high-leverage games in the NFC East and AFC South — check out Mike Beuoy and Reuben Fischer-Baum’s playoff implications column. 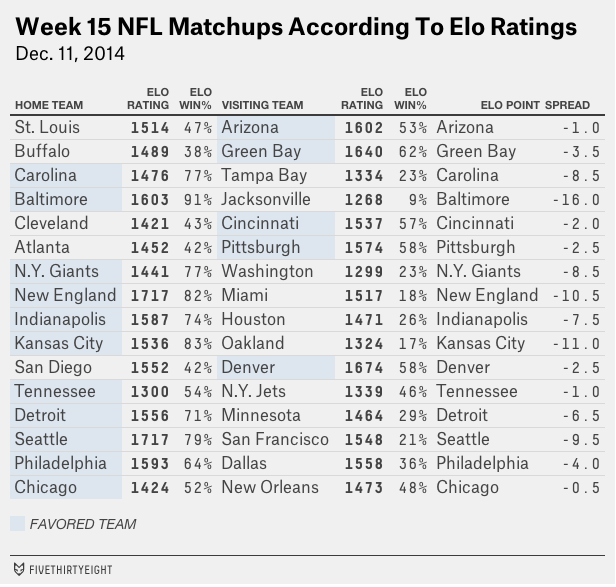 Elo has been on a hot streak in Las Vegas; the point spreads the system spits out have been on the right side of the closing Vegas line about 55 percent of the time this year.

This is almost certainly just blind luck. The system isn’t as sophisticated as what bookmakers use, and Elo only beat the point spread 51 percent of the time in our backtesting of it — not enough to make a profit after the casino’s take.

But this has been a fairly predictable NFL season; for the most part, the teams that looked best when it began look the best now.

CORRECTION (Dec. 11, 10:29 a.m.): A previous version of this article incorrectly said New England has remained in Elo’s top four every week of the season. It has remained in the top four during all but two weeks.