On Sunday, the Green Bay Packers beat the New England Patriots, who had entered Week 13 ranked first in FiveThirtyEight’s NFL Elo ratings. They got there by defeating the previous No. 1, the Denver Broncos, in Week 9. But unlike the Patriots, the Packers didn’t move into the No. 1 position. Instead, Green Bay ranks No. 4, according to Elo, up from No. 6 previously. New England remains in first, barely edging out the Seattle Seahawks, who had a nice win of their own last week against the San Francisco 49ers. The Broncos, in third, are not far behind.

The Elo ratings have the virtue of simplicity, but they sometimes fail to account for important information. The Packers’ rating is not quite as high at it might be, in part because they started the season with a league-average Elo rating after finishing 2013 poorly.

It’s usually a good idea to consider a team’s performance from the previous season when forecasting how well it will do in the current one. The NFL isn’t as inconsistent as its reputation implies; if the season ended today, eight of the 12 teams that made the playoffs last year would do so again. Three other playoff entrants from last year are a game or less out of playoff position. But the Packers give us a good reason to discount 2013: Their star quarterback, Aaron Rodgers, was injured for much of the season.

But there’s also a more subtle reason why Elo is slightly less keen on the Packers. Their performance has been good but inconsistent compared with teams like Seattle.

In the chart below, I’ve plotted each NFL’s team performance along two dimensions. The horizontal axis measures each team’s average margin of victory, adjusted for home-field advantage and the quality of their opponents as measured by Elo. (This math is pretty simple: If Elo evaluates a team’s opponent as being three points stronger than an average NFL team, a 14-point victory would count as a 17-point victory instead.) The vertical axis measures how consistent each team has been, based on the standard deviation in its adjusted margin of victory. More consistent teams are in the top half of the chart; less consistent ones on the bottom. 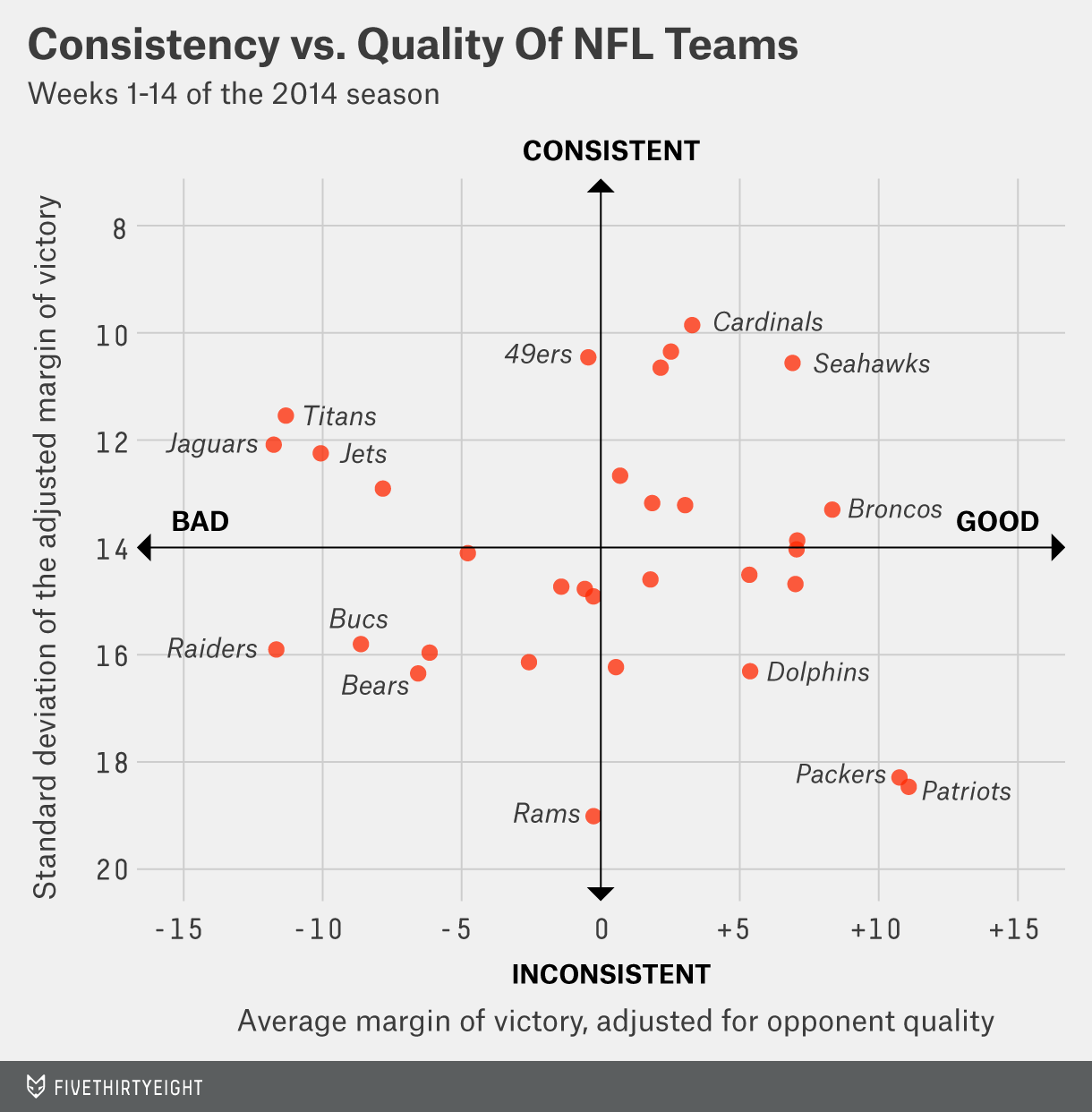 The Packers have been the third-most inconsistent team in the NFL by this measure, behind only the Patriots and the St. Louis Rams. Although a number of Green Bay’s wins have come by blowout margins, its three losses have also been decisive. (This year, Green Bay lost to the New Orleans Saints by 22 points, to Seattle by 20 points and to Detroit by 12).

The Seahawks rate as one of the most consistent teams in the NFL. Their four losses have come by an average of just 5.5 points. And they haven’t won any game by more than 21 points (the Packers have had three such victories).

Elo doesn’t directly reward a team for consistent performance, but it does discount lopsided margins of victory, especially when favorites win. In Elo, a team’s rating will improve slightly more if it beats two teams by 14 points than if it beats one by 27 and the next by just a single point. That helps Seattle, which has won by solid but not blowout margins.

But is this just a quirk in how the Elo ratings are constructed? Or is inconsistency a problem for Green Bay?

Often what looks like inconsistency in the data is just statistical noise. But there’s a case to be made that it’s a real issue for Green Bay based on the long-term historical performance of Rodgers. As my colleague Benjamin Morris has documented, Rogers is one of the best quarterbacks in the NFL at holding a lead, but he has been a mediocre comeback quarterback, perhaps because he plays too conservatively when behind. That pattern will yield relatively clear wins and losses compared with a Tony Romo-esque quarterback who mounts comebacks but also blows leads.

Green Bay, however, will need at least three postseason victories to win the Super Bowl, and it’s likely to fall behind in at least one of those games. Rodgers will have to be up to the challenge, perhaps with more aggressive play. 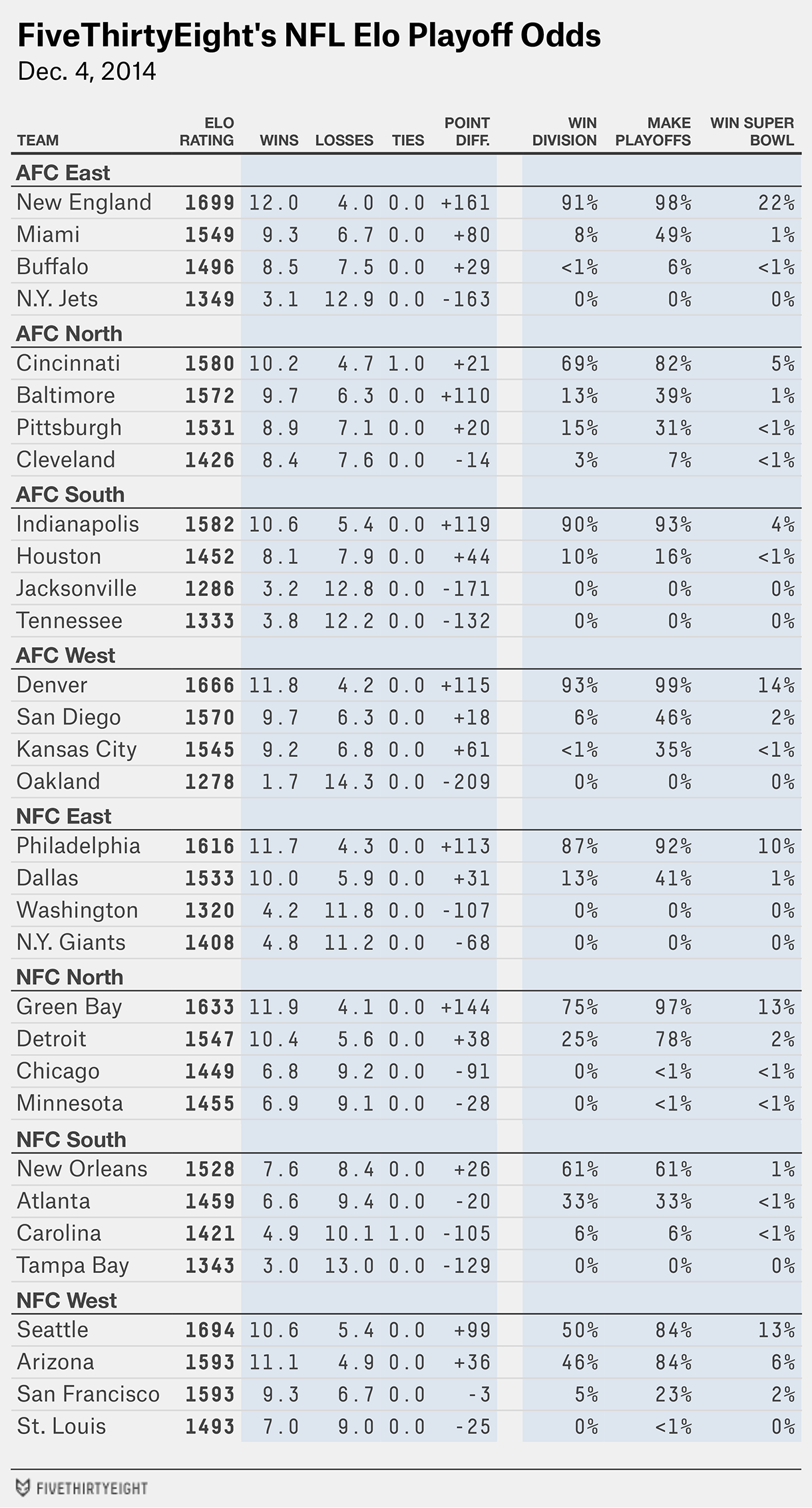 Beuoy and Reuben Fischer-Baum have already covered the NFL’s increasingly convoluted playoff picture, so I’ll add only a few short comments here. One is about the demise of Romo’s Dallas Cowboys, who have just a 41 percent chance to make the playoffs (down from a peak of 90 percent entering Week 8). The other is how low the Cleveland Browns’ chances are — just 7 percent, according to Elo — despite their 7-5 record. That’s partly because Elo rates Cleveland as still being a below-average team and partly because the Browns don’t fare well according to the various tiebreakers the NFL will use should they be deadlocked for a playoff position. 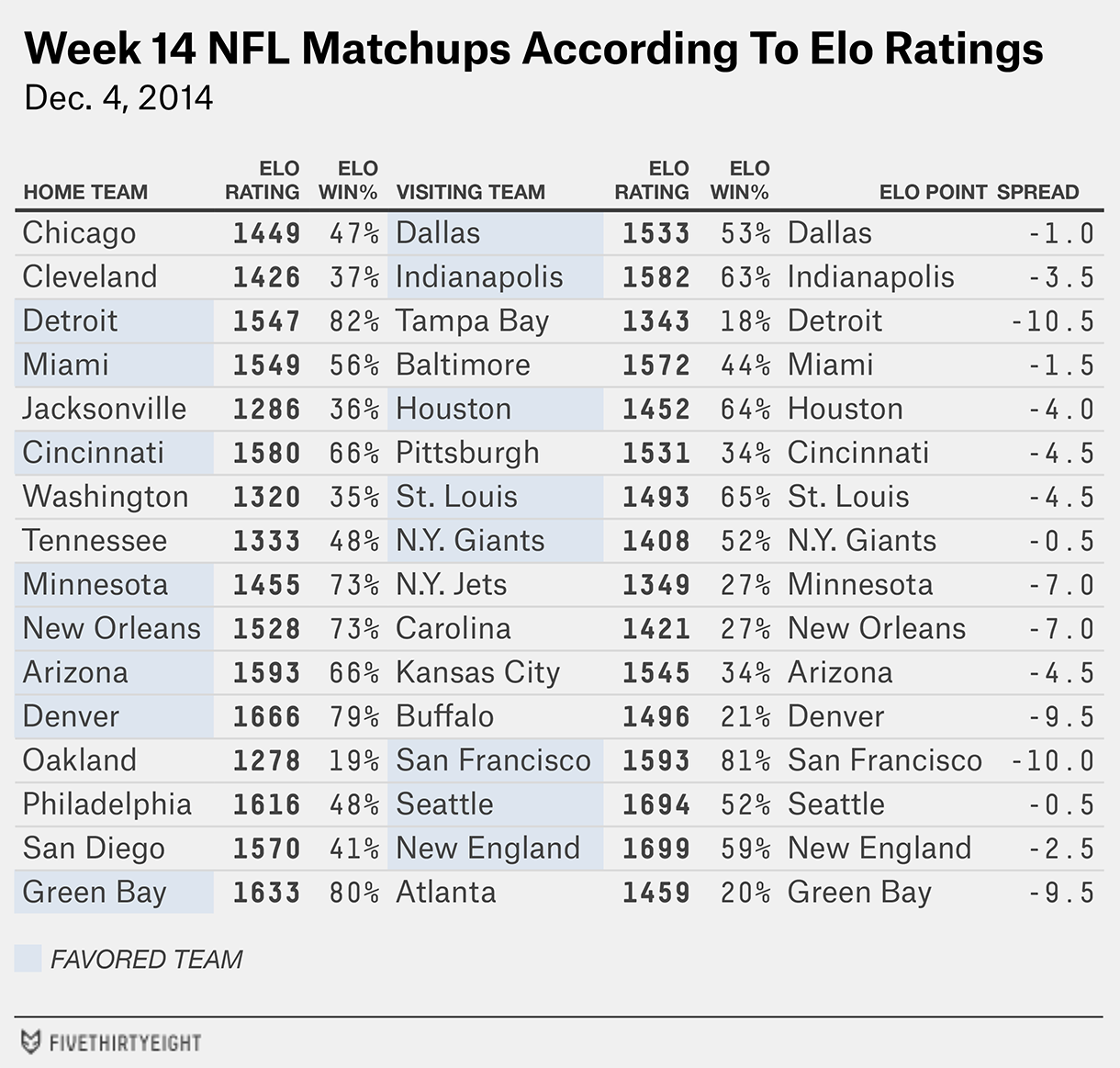 Elo’s performance against Vegas point spreads has become better over the season (we still don’t recommend that you bet on them). But meaningful differences between the two systems have also become harder to find. One disagreement this week involves Green Bay, which Elo has favored by 9.5 points at home against the Atlanta Falcons but which Vegas has favored by an even clearer 12.5-point margin. Arizona has been another source of disagreement between Elo and Vegas, and that’s true this week as well: Elo has the Cardinals favored by 4.5 points at home against the Kansas City Chiefs, while bookies have the game as a pick ’em.