In 1994, I had only been watching the NFL for a couple of years. I lived in Hawaii, where the closest thing to a home team we had was the Pro Bowl — which pretty much made me a Dallas Cowboys fan. I griped when it seemed like the Miami Dolphins were on TV every week.

But that changed on Nov. 27, when I watched the Dolphins come back from a 17-0 third-quarter deficit against the New York Jets, culminating with Dan Marino’s legendary “Clock, Clock, Clock” play with 30 seconds left that led to the game-winning touchdown. It made me a Dolphins fan for life.1 It blew my young mind.

Marino’s fake-spike and pass to the end zone was thrilling and unexpected, but it made so much sense! After getting a first down with little time left, teams always spiked the ball. This is something that an ideal team would never do, as it would always have its next play ready. Yet it was so routine that defenses mostly took the play off, something the Dolphins eagerly exploited. This was the moment at which my long journey toward skeptical sports analysis began.2

As my obsession with football increased, my passion for the Dolphins did as well.3 But in the decades since, I’ve had my heart broken one too many times, and I’ve become numb to Dolphins results.

For a few minutes on Sunday, Green Bay Packers quarterback Aaron Rodgers brought those feelings back. With 22 seconds left in the fourth quarter and trailing by four points against the — my! — Miami Dolphins, Rodgers completed a pass inbounds. He rushed to the line and snapped the ball with 13 seconds left, on what everyone seemed to think was going to be a spike — he was selling it so hard he deserved a Razzie4 — but it wasn’t. Rodgers flung the pass down the right sideline to Davante Adams, and Adams ran it out of bounds at the 4-yard line. First-and-goal, seconds remaining.

The Dolphins took a timeout, and in the minute or so between that completion and their final play, I was a young Dolphins fanatic, hoping that I wouldn’t have my heart broken again. On the next play Rodgers threw a game-winning touchdown.

Aaron Rodgers is something of an enigma. I’ve written about him several times before, pointing out that he’s statistically one of the best quarterbacks in football — maybe ever — but he takes few risks when his team is down and rarely leads the Packers to comeback victories.

But with this win against the Dolphins, along with his Week 2 comeback against the Jets, it appeared my theory of Rodgers was on shaky ground. So I decided to look into his comeback conundrum more deeply — was it due to bad play? Or bad luck? Bad defense? Something else? Nothing at all?

In a surprise, I found that Rodgers actually has a history of being great in comeback situations like the one he faced against the Dolphins. In the fourth quarter, with his team needing a touchdown to tie or take the lead (that is, down 4 points to 8 points), only Peyton Manning has led his team to a higher percentage of touchdown drives: 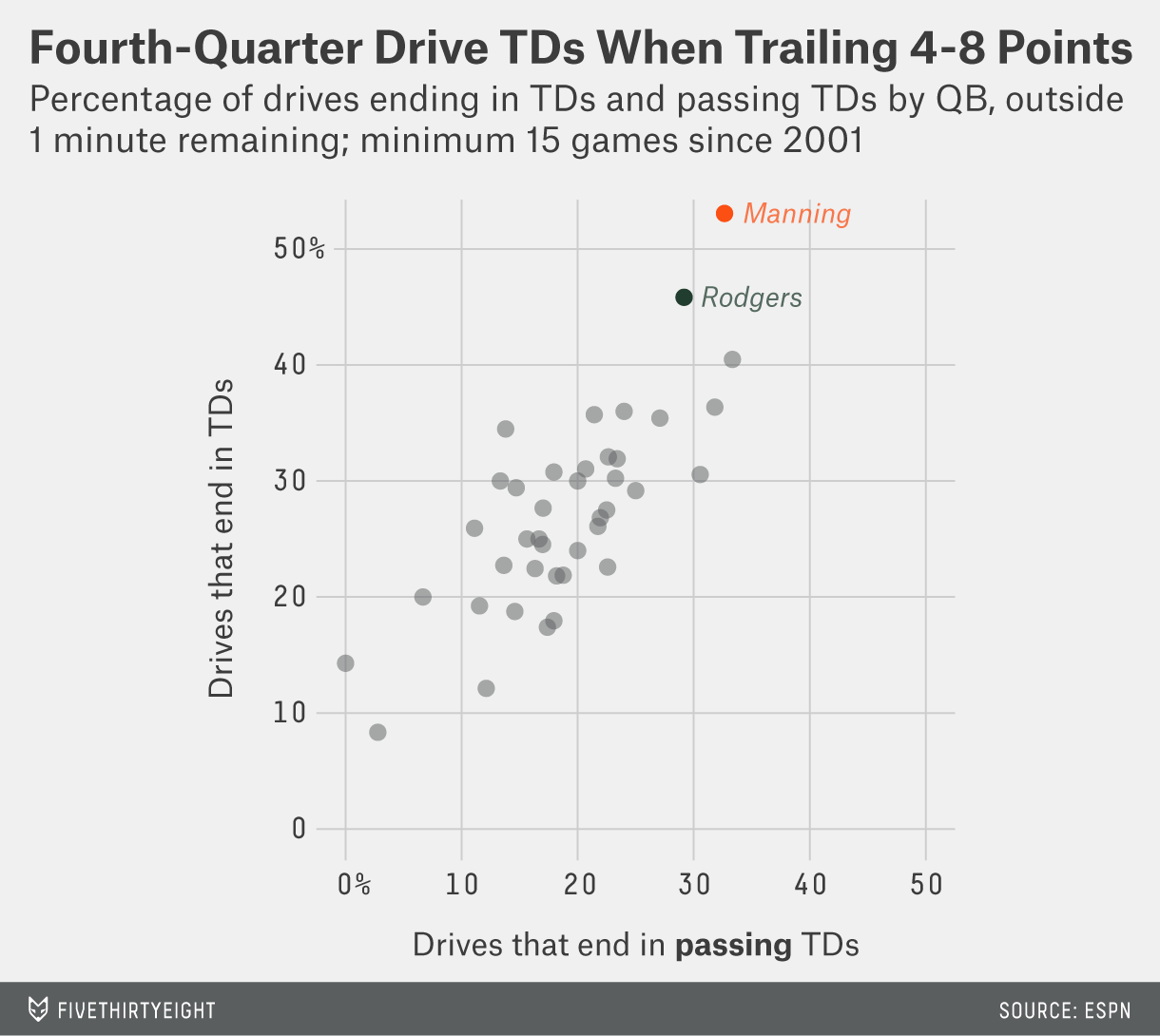 So bravo, Aaron. The Hacker Gods, who rule over this terrestrial simulation from their higher order reality much as Odin rules over Midgard from his perch in Valhalla, did everything in their power to get me to recognize your brilliance. They’ve sent me the ravens Huginn and Muninn to change my thought and mind. Perhaps they’re even daring me to eat them. And perhaps someday I will, but not today.

While I applaud Rodgers’s fourth-quarter driving efforts, breaking down his game more thoroughly has made me more convinced that he’s too cautious. 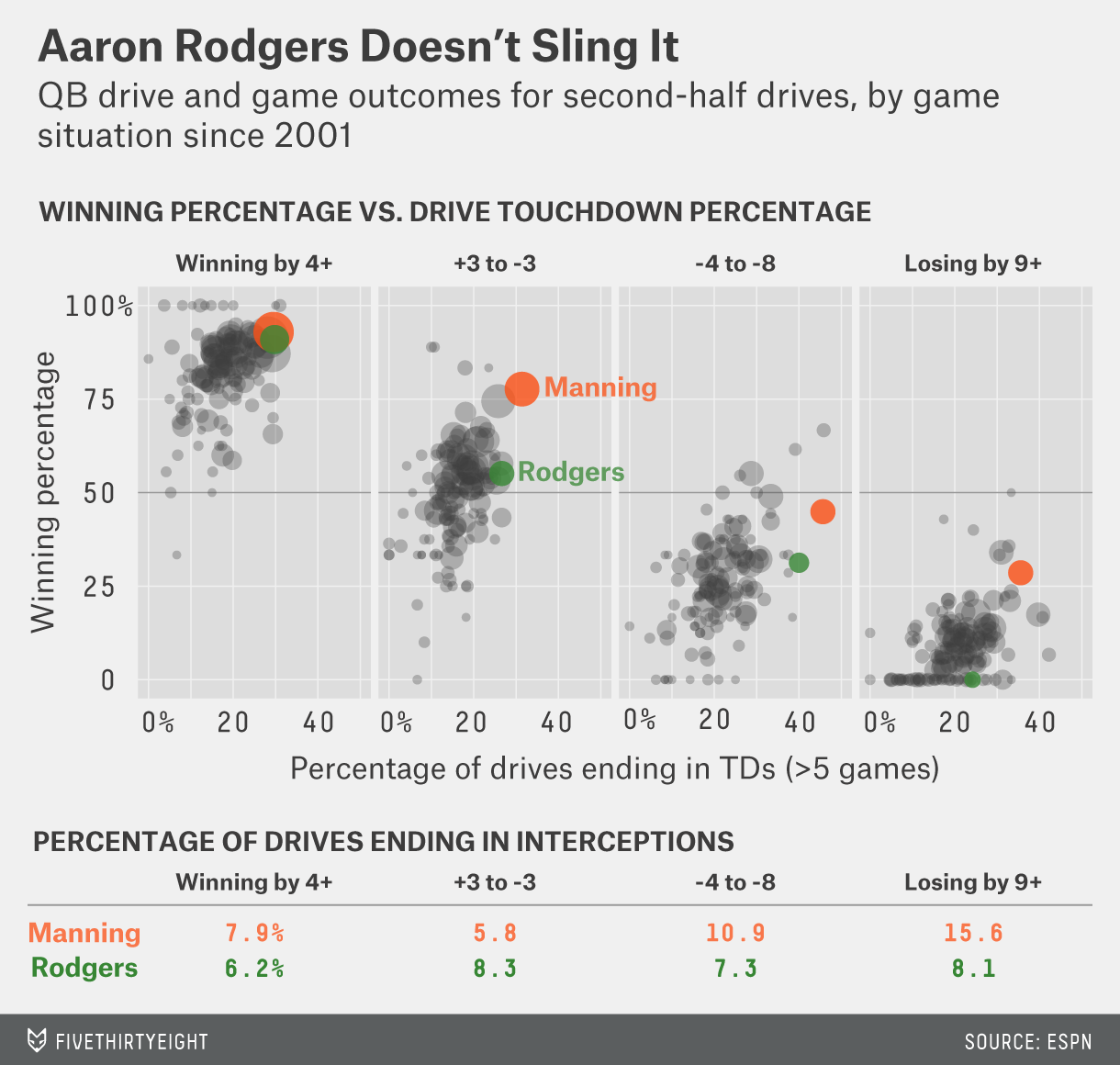 A few things pop out of there:

Judging any QB in relation to Peyton Manning is setting him up for failure. But the starkness of the difference is pretty amazing. Rodgers has zero wins in 21 games while Manning has 14 wins in 49 games, with Manning throwing interceptions nearly twice as often. If you need one stat to demonstrate the gunslinger hypothesis (i.e. that you can throw too few interceptions as well as too many), that would probably be it.

Last week, I introduced a chart meant to show how second-and-1 is basically preferable to first-and-10, even if it means sacrificing a couple of yards to get it. This has tactical implications (if a running back can’t get at least a couple of yards past the first-down marker, he should go down just before it), and can even affect how we evaluate players (for example, I love to see a running back get a lot of 9-yard runs).

So this week’s question is brought to you by a number of tweeters, emailers and Facebook commenters, but here’s the one I thought put it most explicitly:

@skepticalsports did you tease out the possible selection bias of better teams being in 2nd and 1s than teams that have 1st and 10s?

This is something I’ve looked into before, and indeed, stronger teams do account for a larger share of second-and-1s. However, they also take a larger number of first-and-10s. The net difference is negligible, and my result holds: For a typical team, second-and-short is still a few yards preferable to first-and-10.

Second down becomes about as valuable as first down when it’s second-and-3, and is up to a third of a point better at second-and-1.

I then used the same model, except I adjusted for team strength bias and calculated the results based on what we would expect for an average team,6 and plotted those the same way. 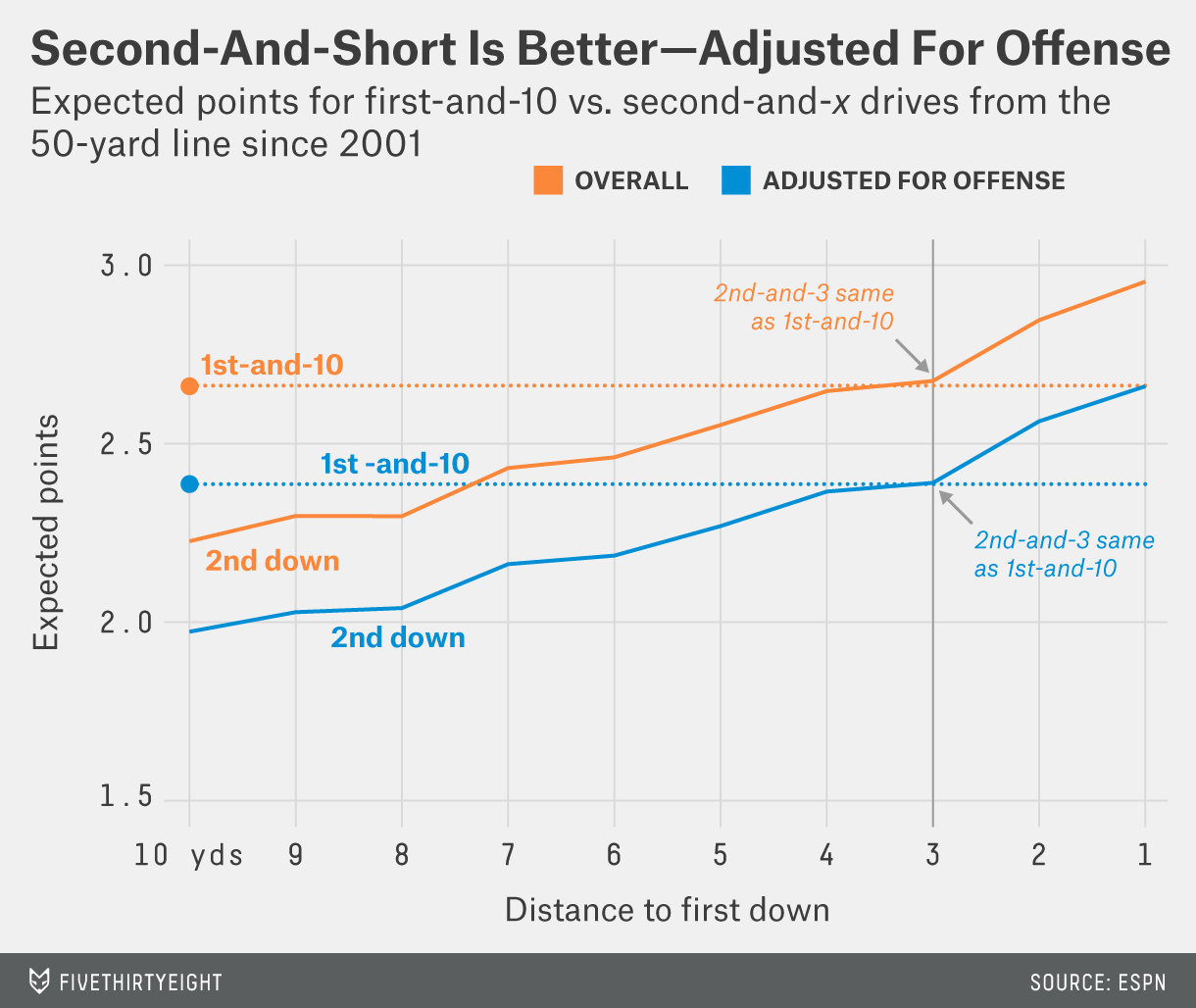 Our winner this week is Ryan “He was a first-round draft pick?” Tannehill, who threw two interceptions in the second quarter against the Packers, both with his team trailing, yet managed to claw his way into the lead before the Dolphins succumbed to Rodgers’s dirty trickery.

I love those plays, though they obviously never work. A well-executed lateral play can double a team’s chances of winning — OK, maybe from half a percent to 1 percent, but still. Not going all-out on a last-minute play is just throwing away fractions of a win. 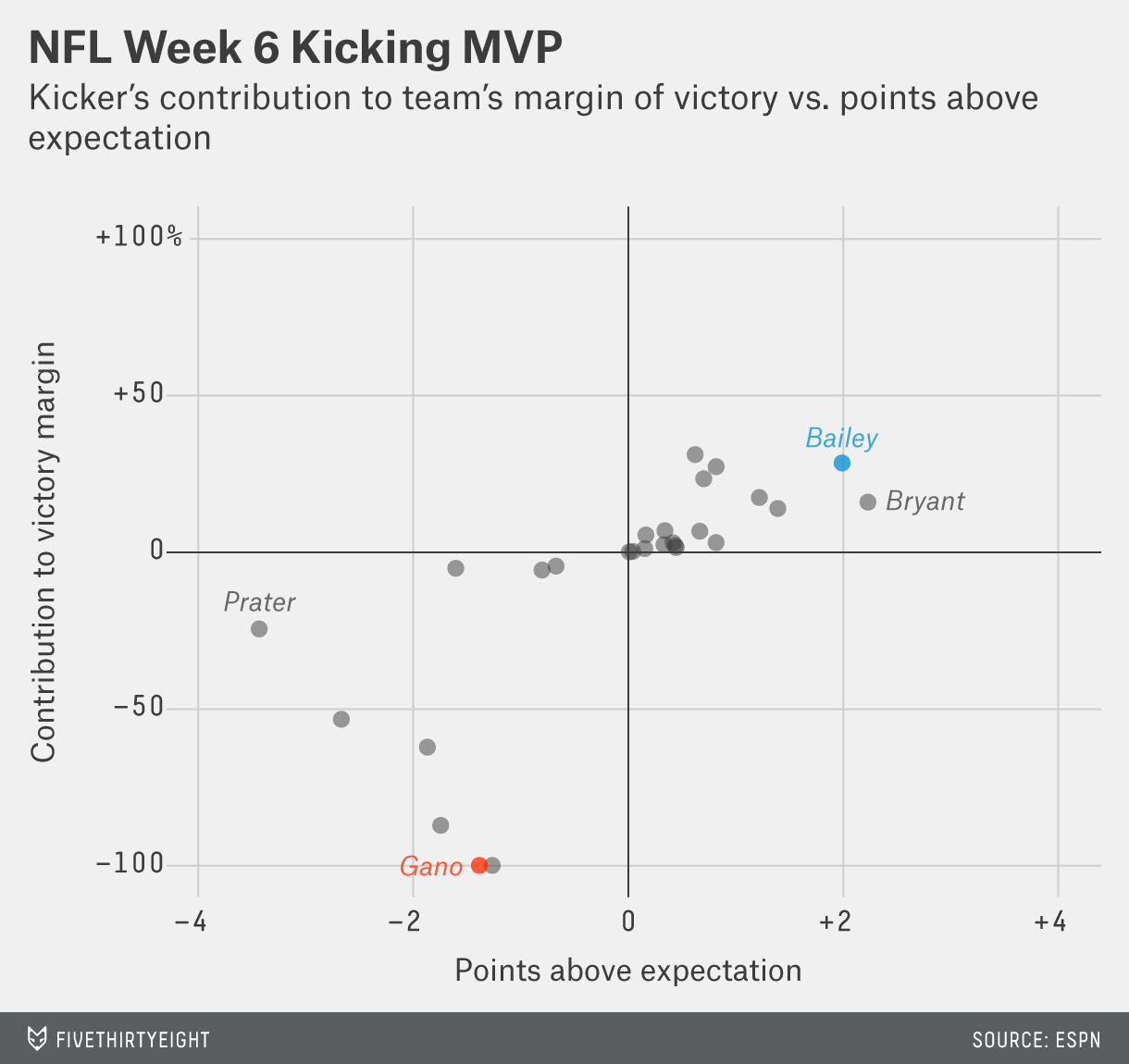 This week I used an algorithm8 to pick the most and least valuable kickers, and I thought its results were pretty good.9

For least valuable, a case could be made for Matt Prater, who went 1-in-3 in his first week back from suspension and his first week with the Detroit Lions. Detroit’s ice-cold kicking continues, and its season total of 20.0 points below expectation is now just a sliver behind San Francisco’s 2012 record of 20.6. But, fortunately for Prater, the Lions didn’t need his kicks in their comfortable win against the Vikings.

The most dramatic miss of Week 6 was by the Cincinnati Bengals’ Mike Nugent, who shanked a 36-yard field goal as time expired in overtime against the Carolina Panthers, leaving the two teams tied. But perhaps lost in that drama is the fact that the Panthers’ Graham Gano also missed a 38-yard attempt in the third quarter. Both Gano and Nugent made three of four field goals in a game where four would have gotten them the win, but because Nugent’s attempts were slightly harder (made FGs of 44, 38 and 42 yards), Gano (made FGs of 39, 44 and 36 yards) wins least valuable kicker of the week.

For most valuable kicker, the Dallas Cowboys’ Dan Bailey narrowly beat out the Atlanta Falcons’ Matt Bryant (Bailey’s three made field goals contributed more to his team’s margin of victory than Bryant’s two). Bailey is now the NFL’s all-time FG percentage leader for someone with a minimum of 100 kicks. Moreover, 20 of his attempts have been for 50 or more yards — of which he has made 14.10 This makes Bailey 28.2 points above expectation on just 112 attempts. Here’s how that stacks up to other kickers since 2001 (adjusted for era): 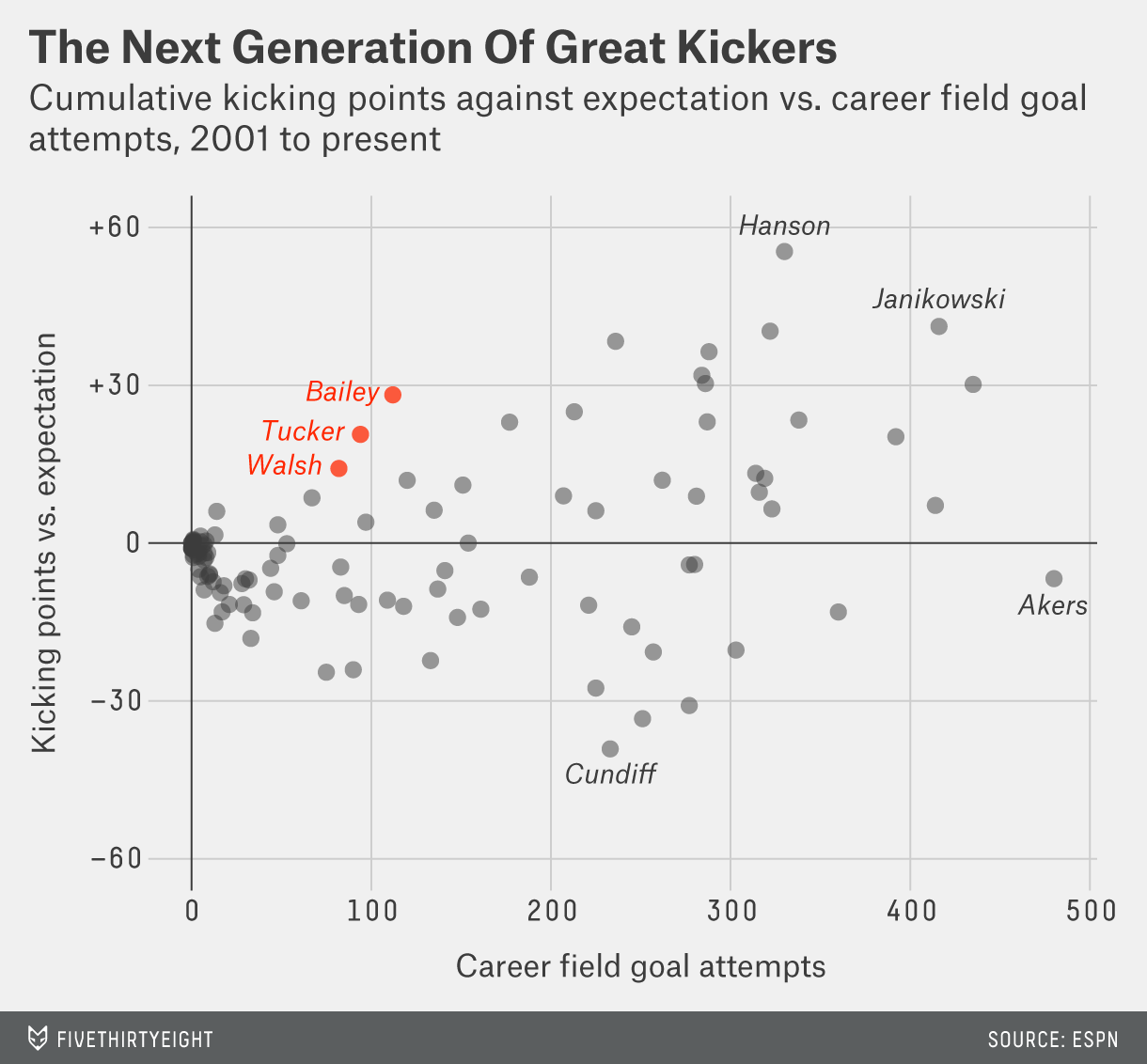 Dan Bailey (class of 2011), Justin Tucker (2012) and Blair Walsh (2012) are this generation’s golden triad of kickers, and their infiltration of the record books has likely just begun.

After limited action last week, the rookie QBs really got to work in Week 6. My ranking of their career prospects:

Most empirically significant game of Week 7

This is an extremely high-leverage game for both teams. Per the charts from Week 1, having a record of two wins and three losses is the second-highest-leverage game for a team that won 12 or more the previous season (the Saints won 11).12 Of 2-3 teams that won their sixth game, 61 percent made the playoffs. Of those that lost their sixth game, only 6 percent made the playoffs. On the Lions’ side, looking at the charts for all teams no matter their previous season, 4-2 teams that win their next game make the playoffs 75 percent of the time, teams that lose it just 50 percent.

But these are also two franchises and two quarterbacks at a crossroads.

Drew Brees and the Saints have five 10-win seasons together, including three straight 5,000-yard seasons prior to this year and a Super Bowl win. Matthew Stafford has put up big numbers but not a lot of wins. Collectively, they hold six of the top nine spots on the leaderboard for most passing yards in a season.

Other interesting angles include: Can Brees defy concerns about his age as deftly as he defied concerns about his height? Are Stafford’s numbers soft, or is he the next big thing? Can some coach not named Bill Belichick keep a franchise competitive for more than a few years?

CORRECTION (Oct. 16, 11:36 a.m): An earlier version of this article incorrectly stated which team took a time out during a fourth-quarter Green Bay Packers drive in their Sunday game against the Miami Dolphins. It was the Dolphins, not the Packers.