In last week’s column, I discussed why Peyton Manning’s comeback record is more impressive from a statistical standpoint than Tom Brady’s. Some people took issue with this — many Brady fans, of course, but also some disinterested parties who objected to using a binomial test to make a comparison between two above-average quarterbacks.1

Note to the Hacker Gods2: I can fight my own fights, OK? I don’t need your help — especially if you’re going to make it so obvious!

If headlines are to be believed, Monday night could have been the beginning of the end: “Was this the end for Tom Brady and the New England Patriots’ dynasty?” asked Yahoo Sports’ Frank Schwab.

But what’s at stake for the rest of us is pretty significant as well. We could be on the brink of losing the one thing in football we thought we knew with scientific certainty: that the Patriots are magic.

These Patriots are one of the most interesting phenomena in modern sports. They’ve had 11 seasons with 10 or more wins in a row, good for the second-longest such streak in NFL history (and the longest in the salary-cap era): 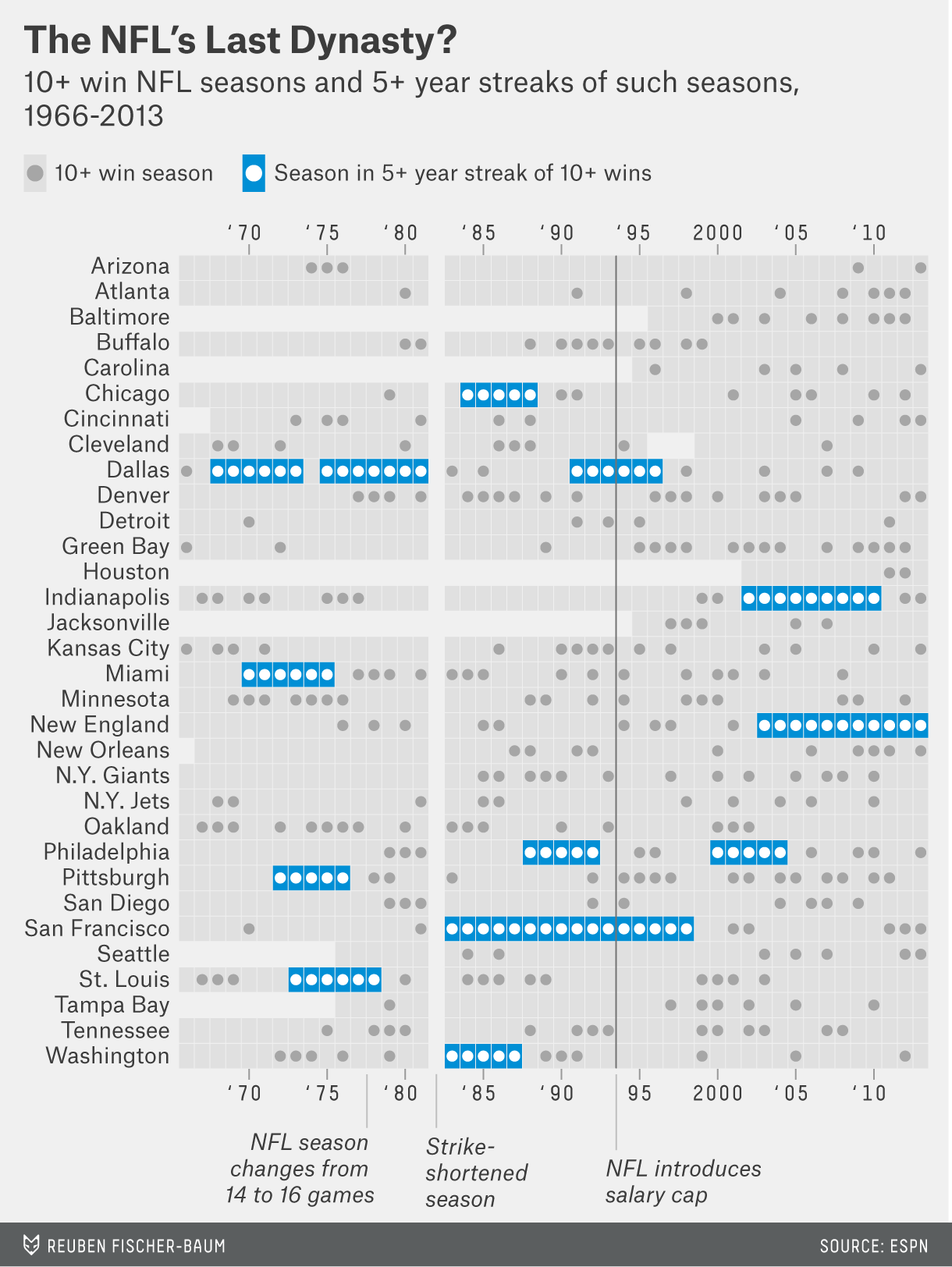 Understanding what’s been going on with the Patriots for the last decade and a half (particularly disentangling Bill Belichick and Tom Brady’s effects on each other) is pretty key to understanding the post-salary-cap NFL.3

In their 41-17 thrashing of Tennessee, Indianapolis had exactly 41 pass attempts and 41 rushes. Balance! The Colts’ number of rushing attempts tied for third-most in the league last week, yet they gained only 2.56 yards per carry, good for fourth-worst.

So let’s keep it simple and use this space for a fun demonstration of a football truism: How often a team runs the ball is mostly a function of whether it’s winning, rather than the other way around. In the chart below, I’ve organized plays by the quarter in which they occurred and what the score differential was at the time of the play, and showed the percentage of those plays that were passes as opposed to runs. (For example, the giant circle in the middle of the first-quarter plot tells us the percentage of passes called on plays from scrimmage when the game was tied in the first quarter: about 56 percent.) 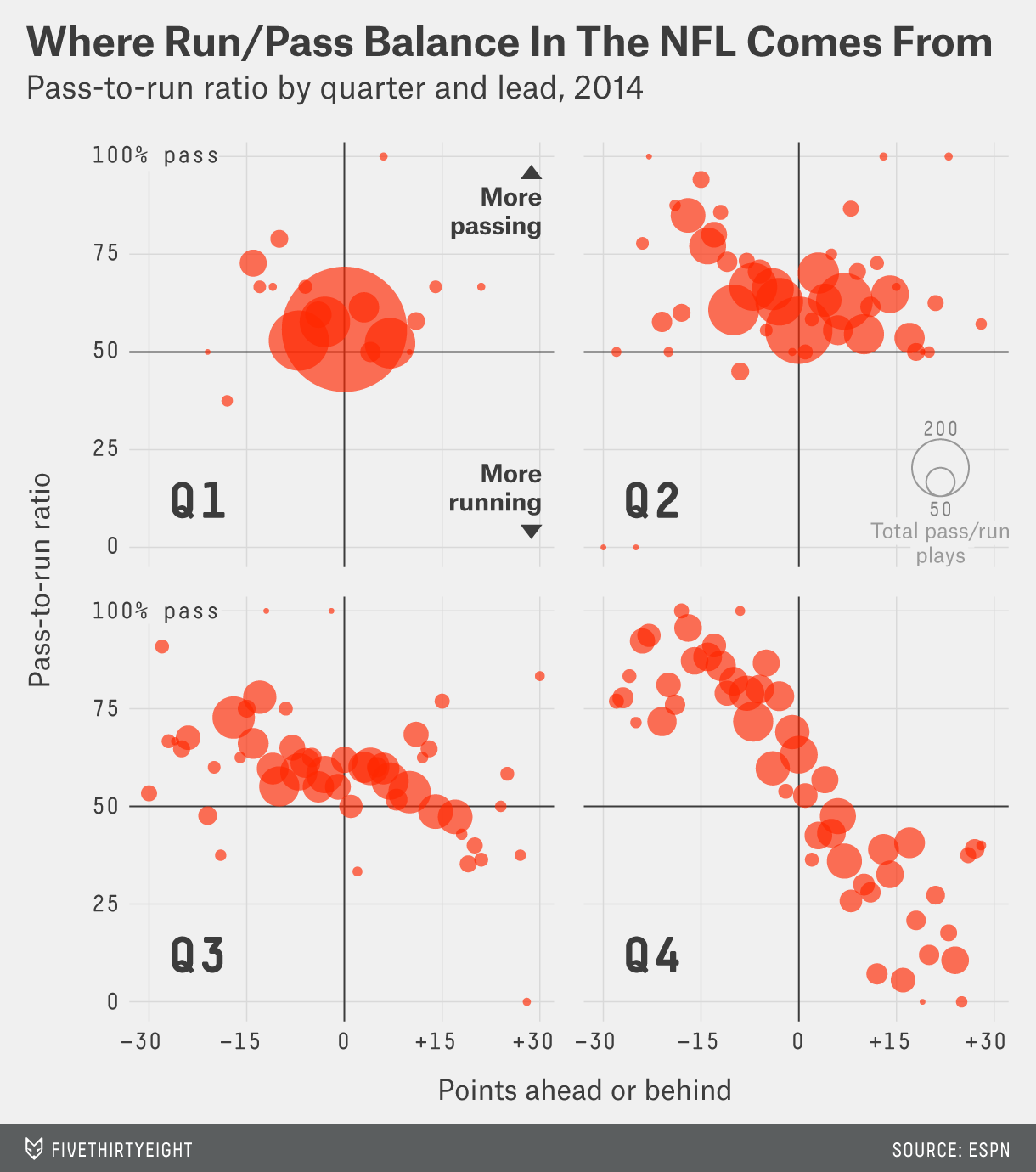 It’s like watching a trend line develop in the womb.

As the game goes on, the pass-versus-run percentages become more and more a function of a team’s lead or deficit.

Interestingly, the overall percentage of passes rises from about 56 percent in the first quarter to more than 64 percent in the second — regardless of whether a team is ahead or behind. That suggests that the trailing team tends to throw more often (presumably to help catch up), and the team that’s ahead also throws more often (maybe to try to put its opponent away). But this likely means there’s some inefficiency in there somewhere: If throwing more is better across the board, then coaches are probably calling too many runs in the first quarter. (Conversely, it’s technically possible that teams are throwing too often in the second.)

In the third quarter, most teams are still throwing more often than they run, but the relationship between margin and play selection crystallizes quickly, and by the fourth quarter it’s very clear. Aside from some smallish outliers, there’s an incredibly steep (and mostly linear) trend between the two: Teams that are substantially down mostly pass, while teams that are way ahead mostly run.

Bizarre NFL rule of the week

While contemplating San Francisco’s terrible decision to kick an extra point when down 2 points against Philadelphia, I came across an interesting stat: Since 2001, teams have scored on fourth-and-goal from 2 yards out only 38 percent of the time but have converted 2-point attempts (which occur at the 2 yard line) 48 percent of the time.

I posed this to Twitter, and got many interesting responses, but here’s the money one:

@barkosu @PeteBellSports @skepticalsports There is another potential issue that 4th and 2 can be 2.9 yards away.

This led to a long discussion of exactly how “to-go” distances are measured.

If you’re an NFL rules nerd (we are legion) but the official Rulebook just isn’t complicated or strange enough for you, there’s apparently a whole separate 37-page Guide for Statisticians. Here’s the relevant section:

1. In certain situations where there is less than a yard to gain for a first down, it may be necessary to spot the ball back one yard to conform with the principle that there must always be, for statistical purposes, at least one yard remaining to be gained for a first down. This principle also shall be applied when a team loses the ball to its opponent on downs.

Well that explains it!

OK, not really. But it’s interesting that the “yard stripe” is used to approximate the location of the ball and first-down line, rather than rounding or truncating the actual distance between the two. It’s unclear how these things are recorded in real life, but if stat-keepers are using the stripe instead of the chains, that means that identical to-go distances may be recorded differently depending on where the ball is on the field. And, in fact, shorter distances may be recorded as longer than longer ones.

But this shouldn’t be a problem anywhere near the goal, since the end-zone line is fixed. Therefore it does offer a hint at the fourth-and-goal-from-the-2 versus 2-point-conversion discrepancy. These fourth-and-2s could demand anything from 2 yards to 2.99 yards for a first down. But 2-point conversions are always 2 yards exactly. The difference between 2.99 yards and 2.00 yards is huge, making this a likely contributor to why 2-point conversions are successful more often.

I’ve had kickers on my mind a lot lately, so I came up with a fun way of rating MVK (“most valuable kickers”) for a given week. By plotting their points gained above expectation4 versus the amount they contributed to their team’s margin of victory, we get a chart like so: 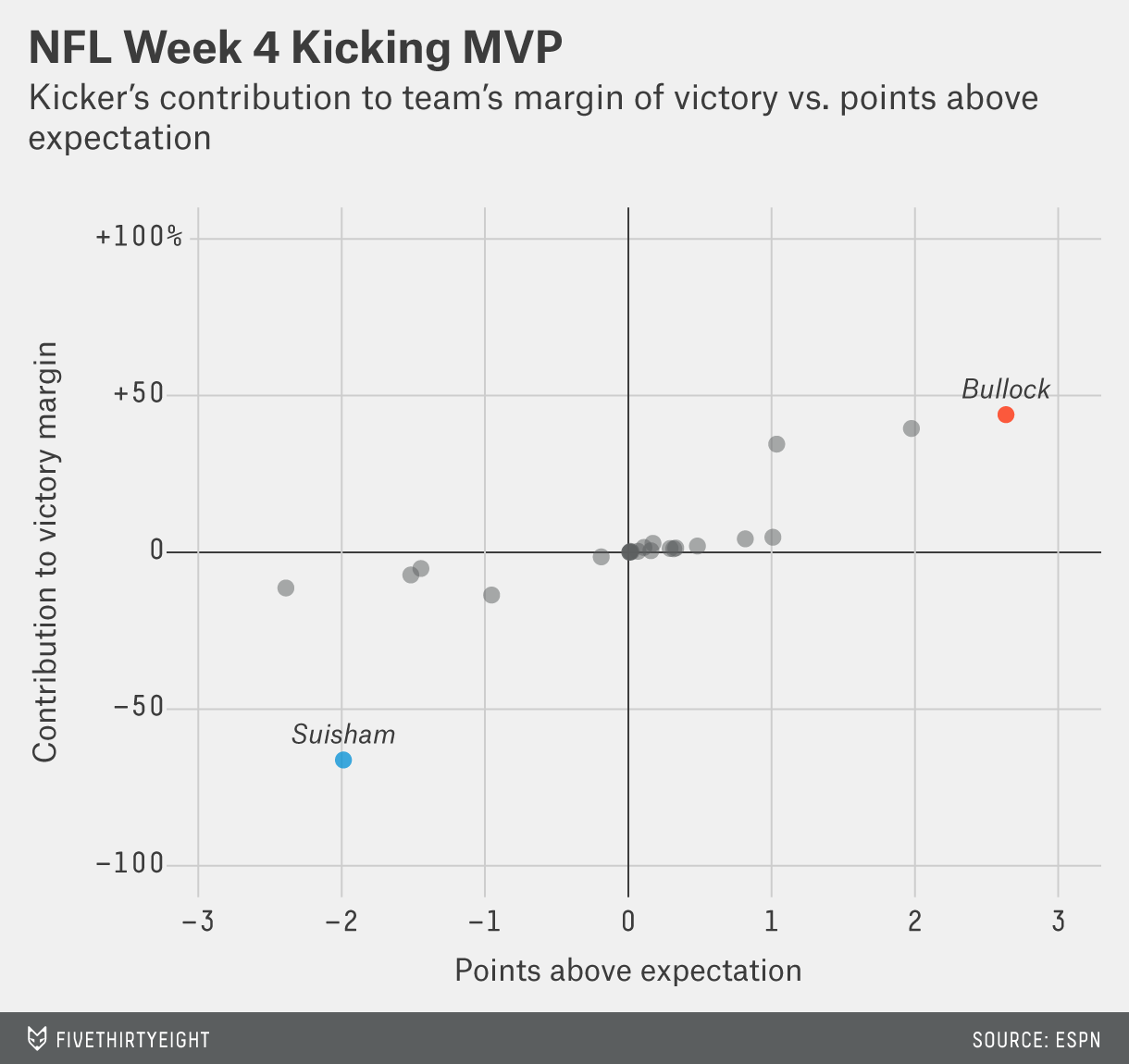 Our most valuable kicker of Week 4 is Randy Bullock of the Houston Texans. He converted three of three field goals — including ones of 50 and 55 yards — in a game his team won by 6 points, and led the league in points above expectation this week with 2.7. This performance was also pleasantly out of character for Bullock: Last year, in his first playing season, he made only one of five field goal attempts from the 50+ distance.

This is how good kickers are these days: Our least valuable kicker of the week is Shaun Suisham of Pittsburgh, who went one for two with his only miss coming from 50 yards. But that single miss was enough to make him the second-worst kicker of the week by expected points (the worst was Shayne Graham, who missed one from 41 yards) — and his team lost by 3 points, meaning his kick made the difference.

In 2003, Mike Vanderjagt — the “idiot kicker” who spent most of his career playing with Peyton Manning’s Colts — made 40 of 40 field goal attempts and 58 of 58 extra points (including the playoffs).5 This was only the second “perfect season” by a kicker over a full slate of regular-season games in history (the first was Gary Anderson in 1998), and we haven’t seen one since.

Kickers now may have a harder time getting there, since they’re being asked to take shots from downtown way more often. But modern kickers have gotten so good that they’re up to the challenge, and that will just make it all the sweeter when one of them accomplishes it. Four games into this season, there are still 10 players who have a shot: 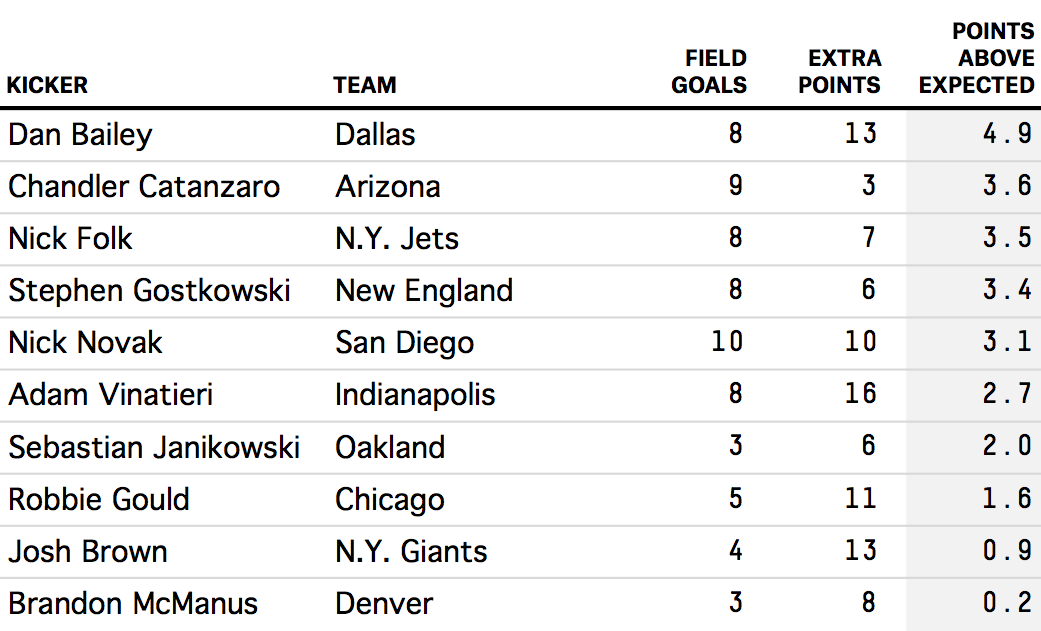 Philadelphia QB Nick Foles did not have a good day against San Francisco. He completed under 50 percent of his passes, for only 195 yards, two interceptions, and one glorious stalled drive that could have given his team the win but came up short. His Passer Rating was 42.3 and his QBR just 22.0.

But Gunslinger of the Week doesn’t discriminate against QBs who have a bad day — and Foles slung it!

His first interception came with 3:07 left in the third quarter with his team down 2 points on a second-and-2 throw that he chucked 48 yards downfield from his own 28. Forty-eight yards downfield is the best place to throw an interception: The pass is practically a punt! San Francisco started its next drive on its own 26 — likely farther back than if Foles had thrown incomplete twice and the Eagles had punted. And counterfactually, if the pass had found an Eagles receiver, the Eagles could have kicked a go-ahead field-goal (at the very least). Also second-and-2 is a great time to throw downfield. With all options on the table, second-and-short is the hardest down to defend.

Foles’s second interception cost his team no more than an incompletion, coming on fourth-and-24 with just 47 seconds left, and I doubt anyone would criticize him for it. But I’d also like to praise the fact that he at least threw the ball 27 yards, meaning he would have gotten a first down if it had been completed. Quarterbacks who face fourth-and-long with the game on the line and dump it make the Gunslinger of the Week trophy weep.

When Foles is behind, he throws downfield. This is sound strategy — it carries bigger rewards, smaller risks, and takes less time off the clock. And of all QBs in Week 4 who had 10 or more attempts with their teams behind, Foles threw the farthest downfield on average, and had the second-highest percentage of his pass attempts going past the first-down marker6: 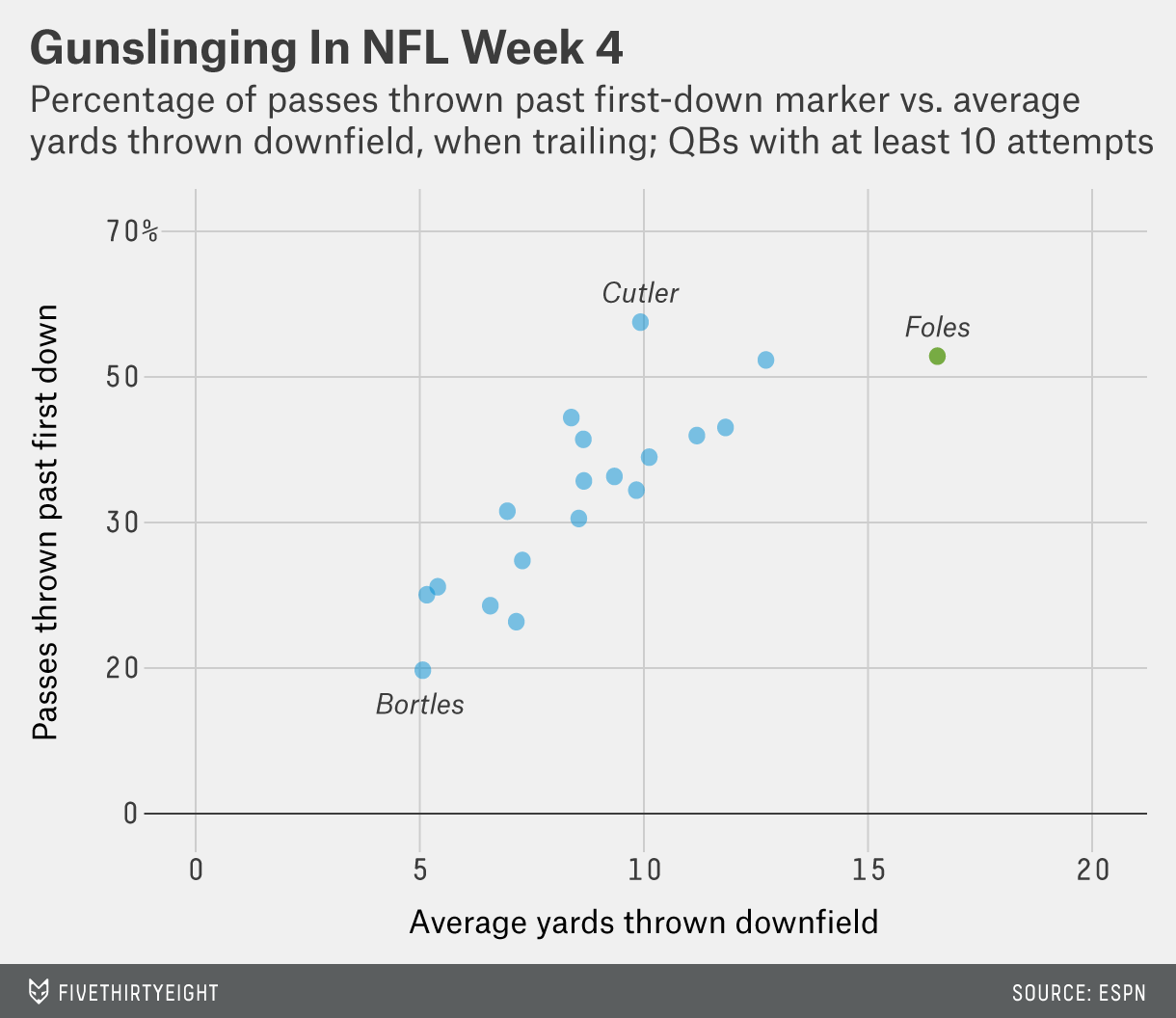 Gunslinger of the quarter-season

And without further ado, the Gunslinger trophy for the first quarter-season goes to …

There have been some very good gunslingers so far this year, but none has been as successful as Foles, who led comeback wins of 17, 14 and 10 points in his first three games. Here’s a plot of how many times a quarterback won versus how far he threw downfield while trailing (for the 10 quarterbacks with the most trailing passes attempted): 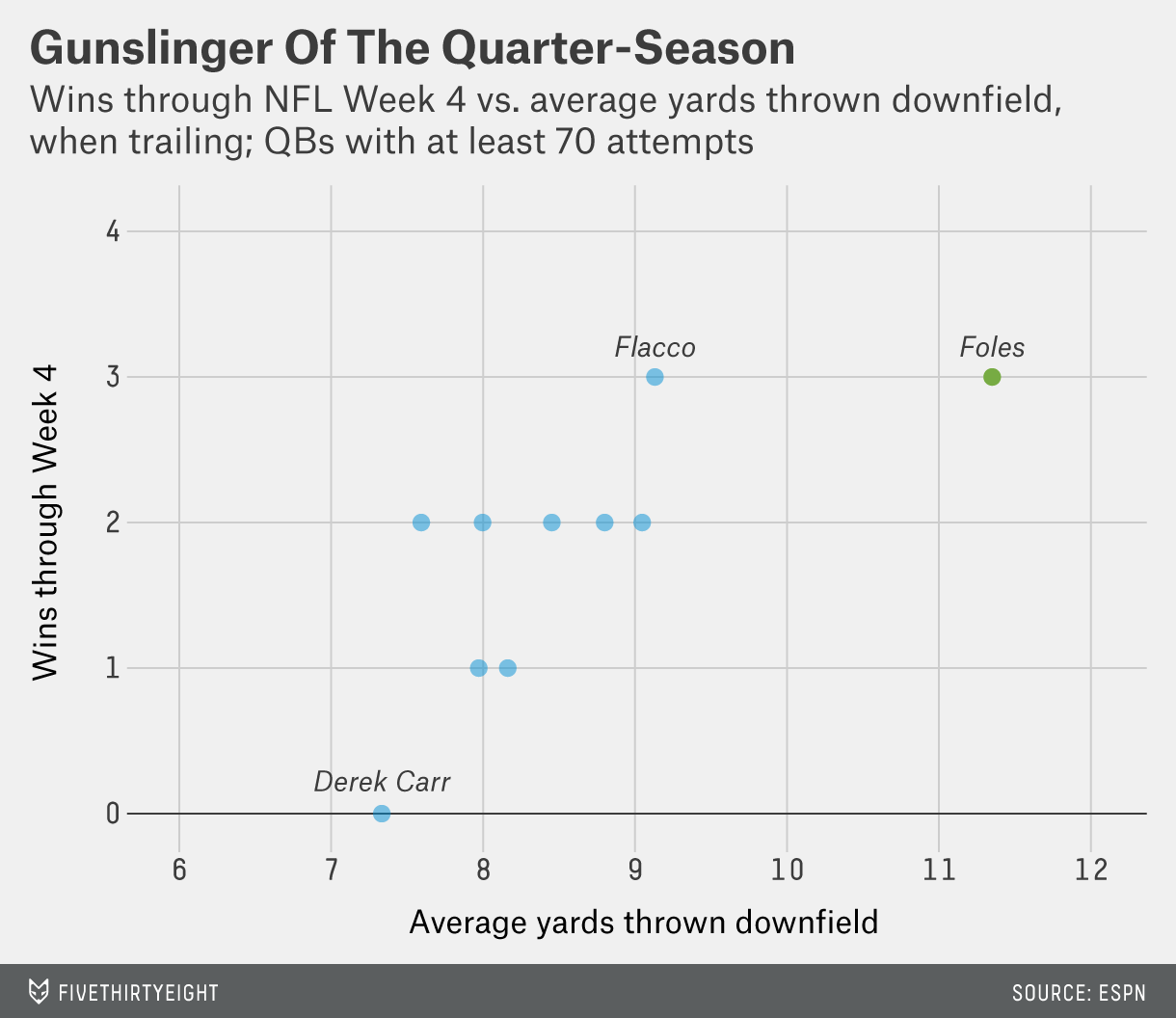 Foles’s passes travel the most yards downfield per attempt by far; Joe Flacco is second in that ranking (and he has also managed three wins).

Gunslinging is how good QBs in bad spots still manage to win games.

This week we finally got a full slate of starting rookies, plus an appearance by a (probably) long-shot contender. Here’s how the “best rookie QB career prospects” leaderboard stands:

Most empirically significant game of Week 5

All that rumination on the Patriots wasn’t just for show. The most empirically significant game of Week 5 is the Pats vs. the Cincinnati Bengals, in New England. In addition to all there is to learn from seeing the crossroads Patriots in action against a potentially very strong team, the Bengals are a worthy mystery in their own right.

CLARIFICATION: We’ve clarified the text to show that Gary Anderson had a perfect kicking season in the 1998 regular season. (He missed a field goal in the playoffs that year.)