For a middling NFL quarterback, Cincinnati Bengals starter Andy Dalton has already accomplished quite a bit in his football career. In college, he led Texas Christian to more postseason top-10 finishes (three) than the program had mustered in its previous 69 seasons combined, and graduated as the school’s most decorated passer by just about every metric. Soon he was drafted into the NFL just three picks shy of the first round. In the pros, Dalton has won more games in his first three seasons than all but three signal-callers in NFL history. If you plotted out the entire population of people who play quarterback at any level of football, Dalton would be near the top 1 percent.1

And yet, Dalton — who signed an instantly scorned six-year, $115 million contract extension with Cincinnati last week — is also a symbol of mediocrity. What’s a team to do when its “quarterback of the future” matures into something less than a perennial Pro Bowler but something more than a scrub? For all his achievements, Dalton has been exactly average as a passer in his NFL career, and at age 27 he isn’t likely to get much better before his performance starts to decline.

This is the dilemma for teams like the Bengals: While average quarterbacking is difficult to replace, it’s also not good enough to reliably lead a team to Super Bowl contention, even with strong defensive help.

There’s a tendency for talking heads to proclaim with certainty that a team “will never win a Super Bowl with so-and-so at quarterback,” only to see the prediction disproven in a flurry of playoff upsets. (Joe Flacco was Exhibit A of this two years ago, and before him, Eli Manning.) We always know less about the NFL than we think we do; the best team in the league only wins the Super Bowl 24 percent of the time (perhaps less often in recent years — 2013 notwithstanding), and it’s notoriously difficult to predict which team will claim the title. For teams with quarterbacks below the Brady-Manning tier, there’s comfort in this uncertainty — it isn’t outside the realm of possibility that the Bengals could collect a Lombardi Trophy behind a league-average quarterback like Dalton.

But since the 1970 AFL-NFL merger, such results are uncommon. Take a look at the chart below, which uses a simple logistic regression between a team’s defensive SRS rating,2 its primary quarterback’s adjusted net yards per attempt (ANY/A) index,3 and whether or not the team won the Super Bowl during the season in question. 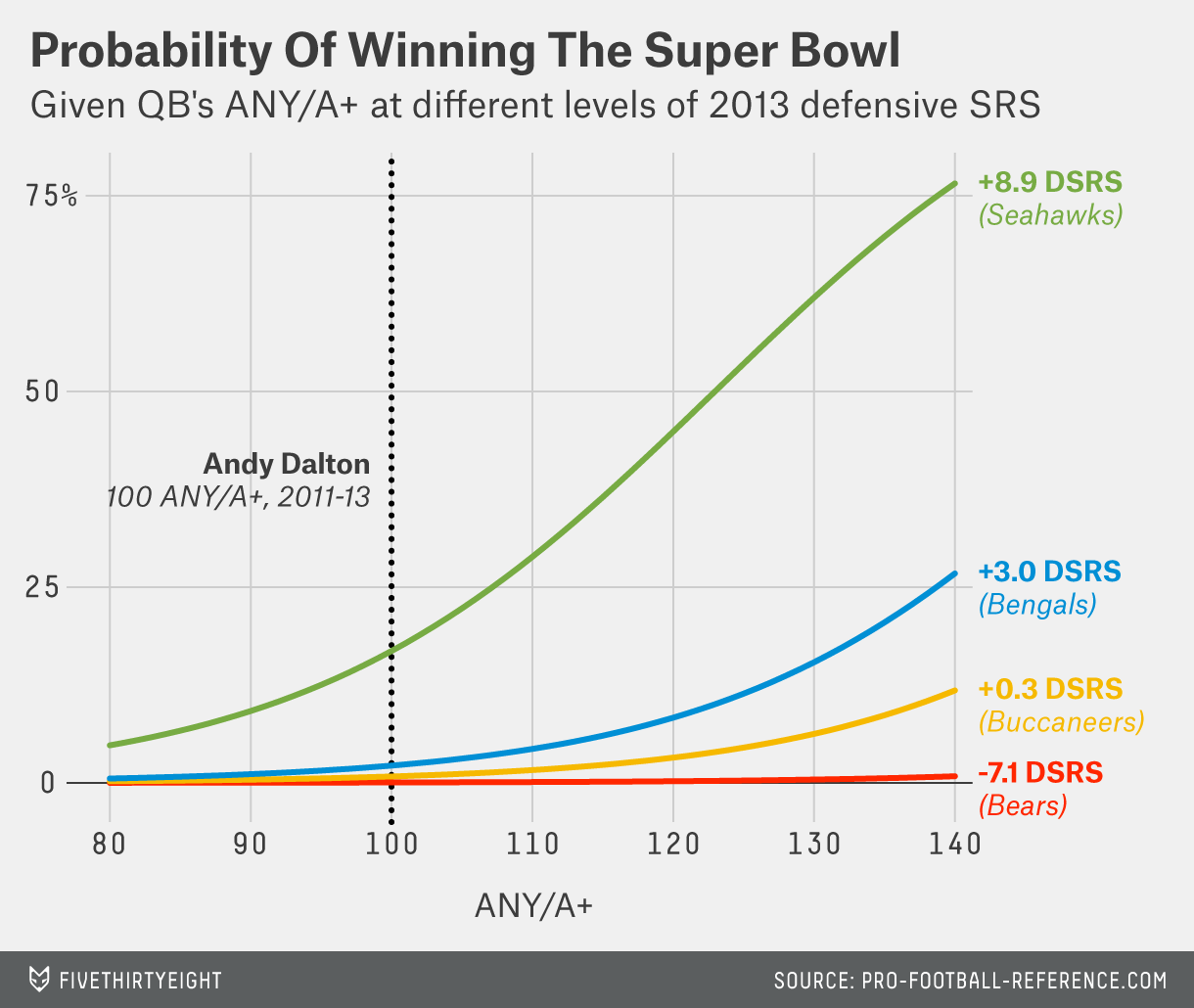 Only five of the 44 post-merger Super Bowls have been won by a team whose primary passer produced an ANY/A index of 100 or below (100 is average.) Of those five, three — the 2000 Baltimore Ravens, 2008 Pittsburgh Steelers and 1986 New York Giants — boasted notably great defenses.4

Take a look at that chart again — even with the aid of a dominant defense5 (the green line), the best chance of winning the Super Bowl a team can reasonably expect with an average quarterback is somewhere between 15 and 20 percent.6 And that’s the absolute best-case scenario. Equip a mediocre passer with a less exceptional defense and watch the odds fall even lower.

For Dalton, that means a Super Bowl is a remote prospect. Paired with merely a good — but not historically great — defense, like last year’s Cincinnati’s side,7 Dalton’s middle-of-the-road quarterbacking would project to be enough for a championship only 2.2 percent of the time in a given season.8 Astonishing championship runs like the one Eli Manning (91 ANY/A index) and the Giants (+0.4 DSRS) made in 2007 are highly memorable, but that’s because they’re not the norm.

Moreover, Dalton isn’t even likely to get better, nor to be as good as he is now for very long. He’ll turn 27 during the 2014 NFL season, the age at which quarterbacks normally have their best seasons before Father Time erodes their skills. Keeping in mind that passing-rate statistics are known for their year-to-year inconsistency, if Dalton proceeds along the typical quarterback’s career path, he’ll only stay around average9 for two more seasons after 2014. Using a simple projection system-like method of predicting future quarterback performance,10 Dalton projects for an average ANY/A index of 98 over the next five seasons. Since the merger, there have been 159 teams whose primary quarterback projected to have a five-year ANY/A index between 97 and 99, and only 18 of them (11 percent) went on to win at least one Super Bowl, all defenses being equal.11

Again, this means it’s not impossible for the Bengals win a Super Bowl with Dalton as their quarterback. But it’s unlikely (especially given my Grantland colleague Bill Barnwell’s research showing that Dalton is particularly susceptible to mistakes when under pressure12).

In light of all this, it may seem crazy that the Bengals just committed to Dalton as their quarterback for the foreseeable future. But the simple truth is that quarterbacks of Dalton’s caliber — yes, those league-average quarterbacks — don’t just fall from the Cincinnati sky like turkeys on Thanksgiving.13

According to the simple projection system described above, 15 quarterbacks forecast to have more efficient seasons than Dalton in 2014. In a 32-team league, that makes Dalton as average among starting QBs as we’ve come to expect. But if the Bengals had to replace him, they likely wouldn’t get a better starting QB. Dalton is 16th-best in all of football, backup QBs included.14

And just because Dalton is average, that doesn’t mean he’s a replacement-level QB. While the replacement level is, by definition, the standard of production that can be provided by any minimum-salary free agent (of which there is a bountiful supply), average quarterbacking talent isn’t nearly as easy to replace.15

As a consequence, the odds are not high that Dalton’s replacement would be as good as he is. Using data on the succession of every NFL team’s starting quarterbacks since the merger, we can model the probability that a new starter will post an average ANY/A index superior to that of his predecessor, based on the performance of the passer he replaced16: 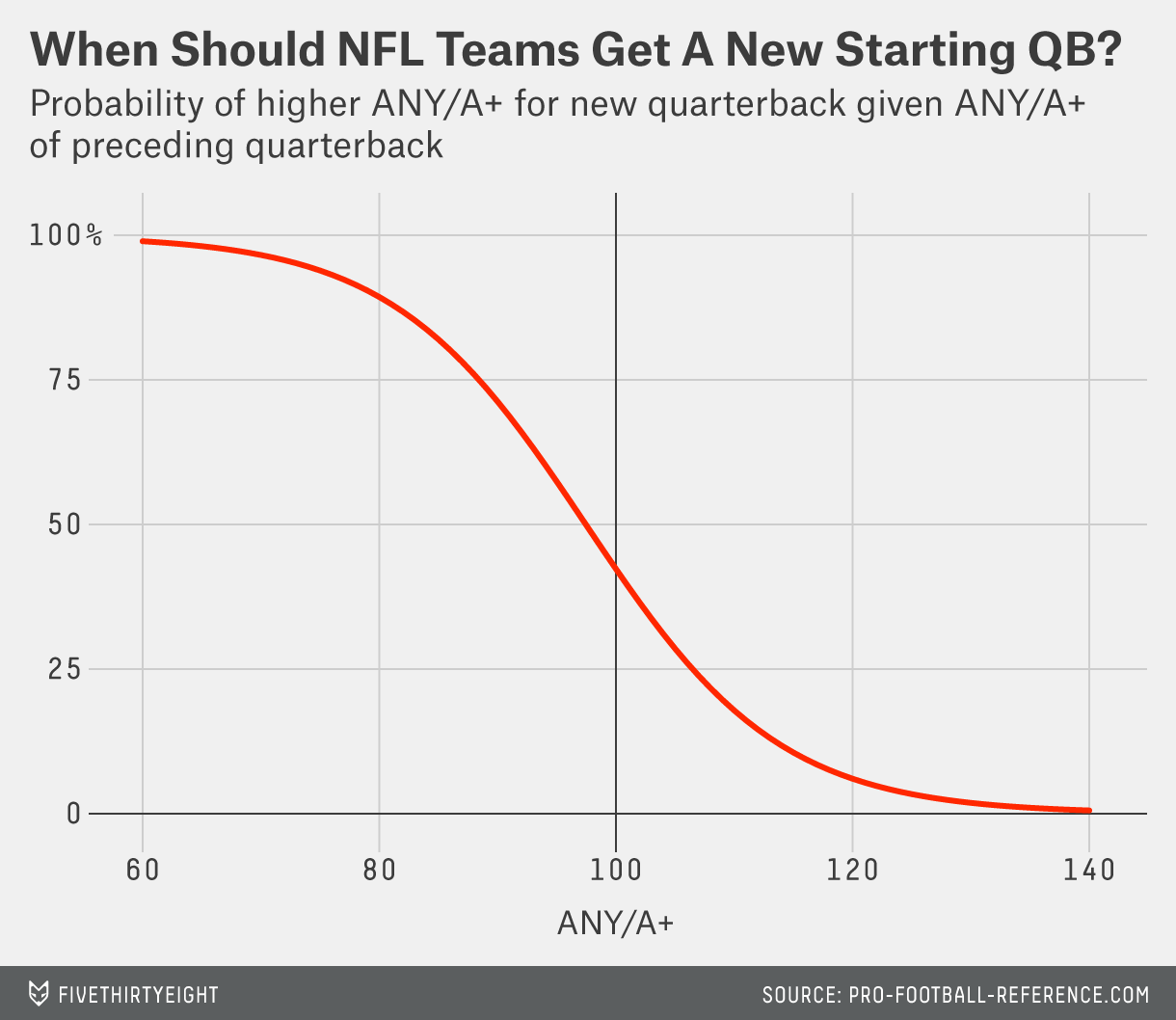 As maligned as Dalton and his contract are in Cincinnati right now, it’s unlikely the Bengals will see better alternatives on the horizon anytime soon. Based on the historical pattern of teams who replaced their starting quarterbacks, the probability of the Bengals’ next starter being better than the league-average Dalton is only 42 percent.

And an average quarterback, while unlikely to move the needle much for a team’s Super Bowl odds, can still be useful in getting to the playoffs. According to another model I developed,17 a perfectly average QB18 and a good defense19 (like the Bengals had in 2013) can get a team to the postseason 57 percent of the time. A replacement-level stopgap would be hard pressed to deliver a playoff berth under the same circumstances.

Teams like the Bengals find themselves in a difficult predicament when trying to assess whether to invest in a league-average quarterback for the long haul. Other sports have their own pieces of conventional wisdom about the perils of getting stuck in the middle between rebuilding and contending, but the NFL’s version is unique. A trip to the playoffs is attainable behind an average passer — and, given the randomness of the NFL postseason, a playoff berth can sometimes be a ticket to an unexpected Super Bowl. At the same time, locking into a long-term deal with a quarterback who isn’t special puts a ceiling on a team’s plans of legitimately contending for championships year in and year out.

As one NFL club president told ESPN’s Jim Trotter last week, “Teams are just afraid to say, ‘Let’s start again, because we literally do not have a legitimate chance to win a Super Bowl with the quarterback that we have.’ They’d rather have an average to above-average quarterback than wait to get a great quarterback. I think it’s more than fair to say that the fear of the unknown is greater than the fear of the known.”

Depending on a franchise’s aspirations, this may not actually be an irrational reaction. Great quarterbacks are extremely difficult to come by. Andy Dalton isn’t one of them, but he is average. And in the grand scheme of pro football, that makes him a pretty rare player.