A week before Thanksgiving, the NFL’s top teams had plenty to be grateful for. Eleven of the top 13 teams in Week 12’s edition of our Elo ratings won their games, with the lone exceptions either losing to another good team on the road (the Arizona Cardinals, then ranked No. 2, fell to the third-ranked Seattle Seahawks) or suffering a stunning upset (the Kansas City Chiefs’ ill-fated trip to Oakland). And eight of the bottom 10 teams lost, generating the widest spread this season between the league’s haves and have-nots (as measured by the standard deviation of every team’s Elo ratings).

There’s been a lot of talk about 2014 being a season of parity in the NFL (especially after the aforementioned Raiders victory completed this year’s “circle of parity,” the phenomenon by which any team could claim superiority over another via the transitive property). In one sense, that’s accurate. There’s no dominant Super Bowl favorite: The New England Patriots, Green Bay Packers and Denver Broncos have gone through hot and cold periods over the past 12 weeks, and the Seahawks and San Francisco 49ers have not even consistently been favored to make the playoffs. Nobody knows what to make of the upstart Cardinals (now less so than ever). By that standard, this season is as wide open as any.

But this year has also seen a stark disparity between the NFL’s good and bad teams. The 2014 season features the 10th-largest standard deviation of Elo ratings through 12 weeks of any season since the 1970 AFL-NFL merger and the second-largest since 1986 (trailing only the 2009 season).

Nearly all of the most imbalanced seasons took place before the NFL instituted true free agency and a salary cap in the early 1990s, which evened out payroll spending across the league and prevented dominant teams from hoarding talent. These measures had the effect of increased parity, both within seasons and between them.

Pockets of inequality still emerge from time to time, even in today’s equipoised NFL. But most of the teams at the bottom of our rankings were above average (some significantly so) at some point in the past few seasons. Late in 2012, the Houston Texans and Atlanta Falcons — now ranked No. 23 and No. 25, respectively — had Elo ratings that would rank second in the NFL right now. And among the bottom third of teams in this week’s rankings, Minnesota, Tampa Bay, Washington and the New York Giants also had above-average Elo ratings as recently as two seasons ago.

The league’s bad teams look particularly bad right now, and the poor got even poorer this past weekend. But even at an imbalanced moment, you can see the handiwork of the NFL’s parity machine. 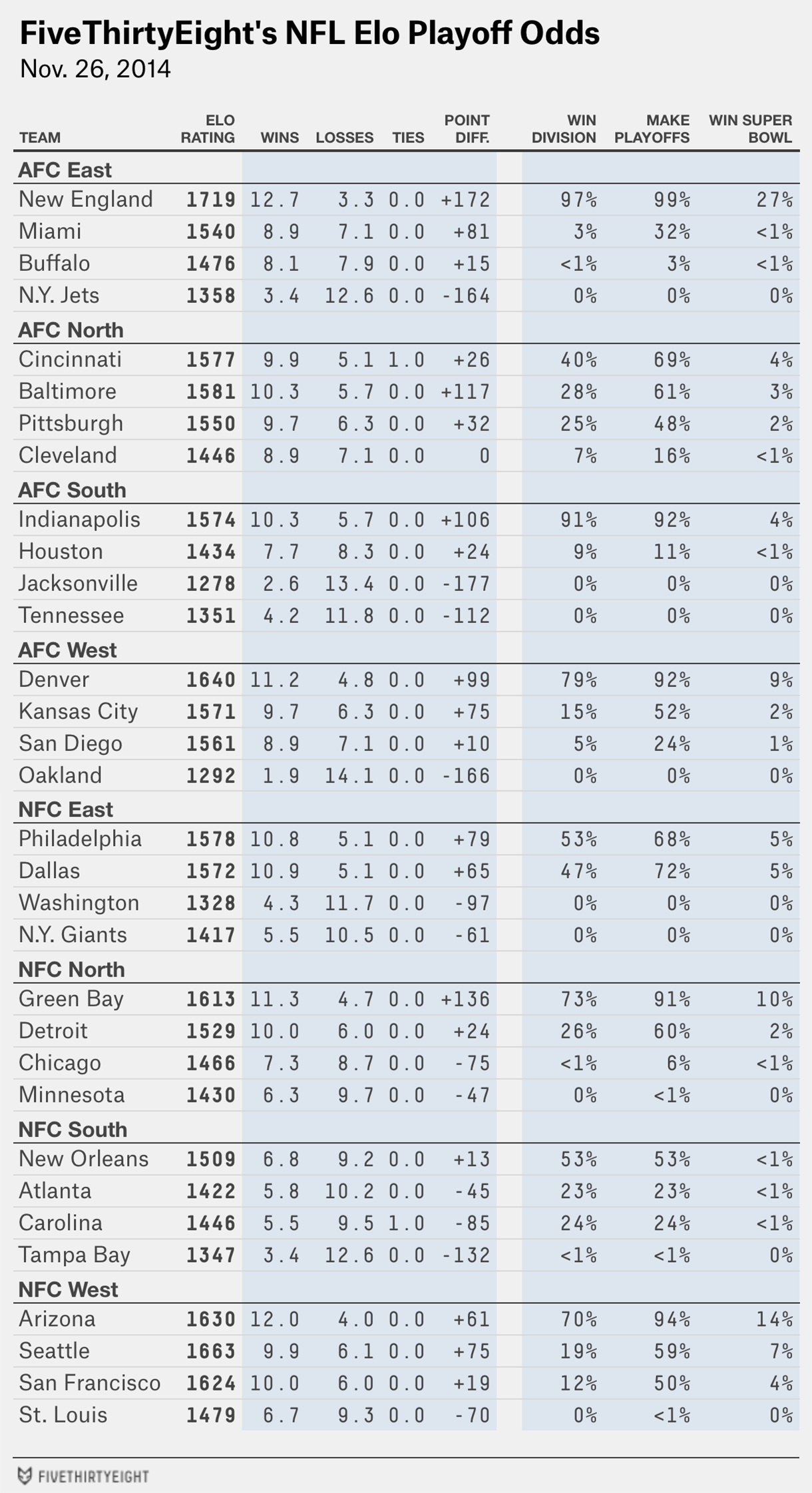 Last week, we wrote about how the Denver Broncos were a team in disarray, losing more points of Elo rating over the previous three weeks than any team in the NFL. In this past Sunday’s game against the Miami Dolphins, it looked like disaster was imminent again — Denver’s win probability was down to 10.2 percent late in the third quarter — before Peyton Manning sparked a comeback victory for the Broncos.

Week 12 was pretty damaging to Kansas City’s playoff chances. A week ago, the team was looking at a 41 percent probability of chasing down the Broncos for the division, and it had the conference’s best chance of securing a wild card slot (42 percent). But with their AFC West odds dwindling, the Chiefs probably need the wild card to make the playoffs. It might seem as though the Chiefs are still well positioned in that department — the Dolphins had been their primary threat going into the weekend — but after the AFC North rivals Cincinnati Bengals and Baltimore Ravens both won, the AFC’s wild card picture is as crowded as ever.

The NFC playoff picture didn’t change all that much, although the Seahawks are once again favorites to make the postseason after beating the Cardinals. Although the game could be seen as the proverbial “statement win” with regard to NFC West supremacy, the loss didn’t really affect Arizona’s playoff chances; the Cardinals are still 94 percent likely to be in. 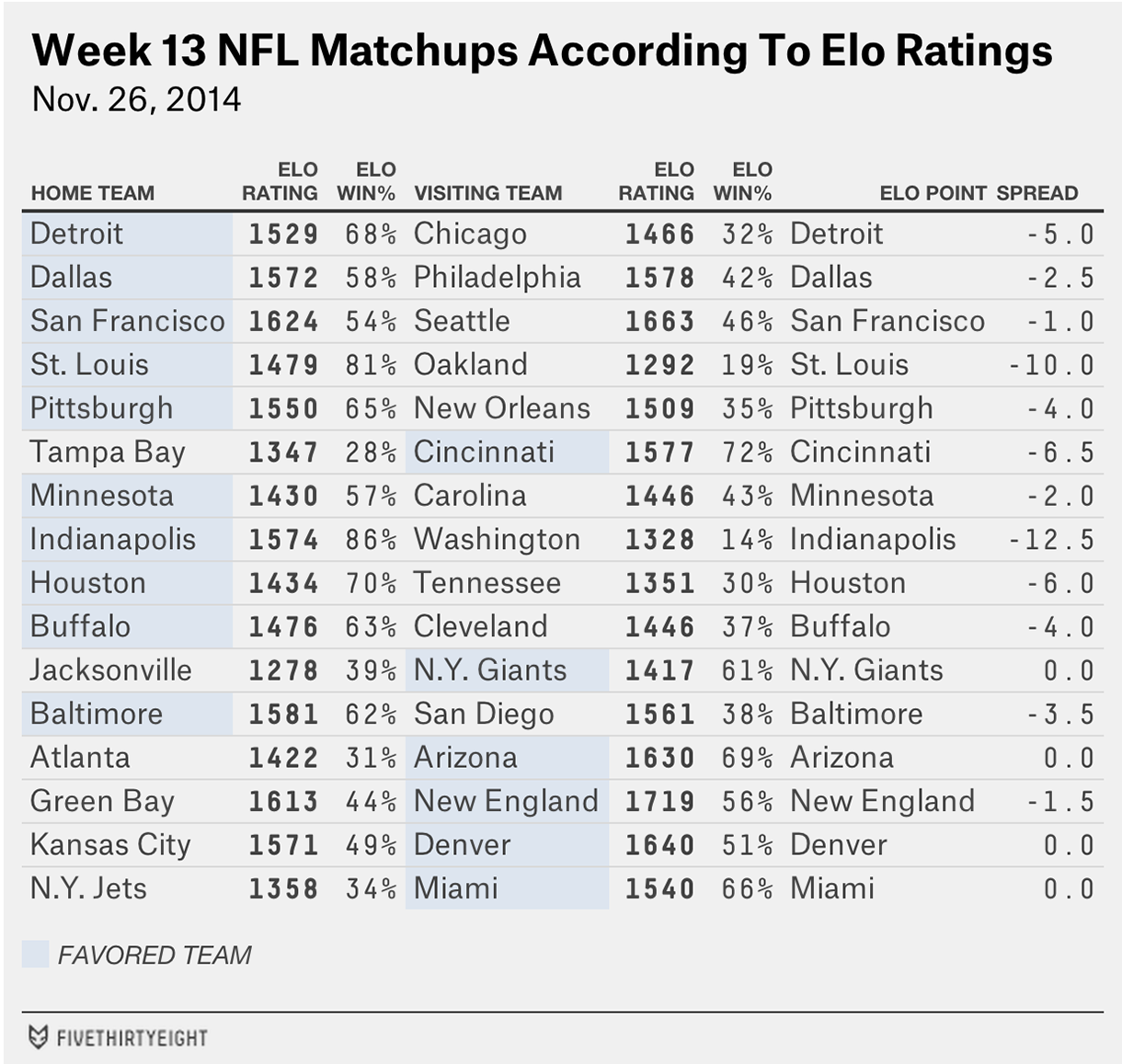 Elo’s had a few solid weeks against the point spread. Don’t let it fool you: You shouldn’t take these ratings to Vegas and bet with them. But it is always fun to compare the gambling lines to those which would be predicted by each team’s pregame Elo ratings.

One of biggest differences this week between Elo and Vegas involves a marquee matchup, in which the Patriots travel to Green Bay to face the Packers. The Packers have been on a roll of late, gaining the most Elo rating points of any NFL team over the previous three weeks, but still they rank just sixth in Elo. At least some of that is because Green Bay entered the season ranked 17th in the league with a below-average 1495 Elo rating, owing to a relatively down 2013 season that saw quarterback Aaron Rodgers miss seven games.

With Rodgers back and playing at an incredibly high level as of late, Vegas has reacted quickly. The oddsmakers clearly consider the Packers one of the two or three best teams in the NFL. For their part, the Patriots have been on fire as well, so the fact that they are three-point road underdogs implies that the market considers them about even with Green Bay. Elo thinks the Patriots are roughly four points better per game than the Packers at a neutral site, so it will be interesting to get some measure of a referendum on Vegas and Elo’s different opinions of the two teams.

CORRECTION (3:53 p.m., Nov. 26, 2014): A previous version of the Week 13 NFL matchups table listed incorrect numbers for the Elo win percentages and point spreads. They and the language in the piece have been updated.