AUSTIN, Texas — Beer miles are won and lost in the “party zone.” When participants in the world’s most athletic binge-drinking event cross into it, they stop running, hastily down a minimum 5 percent ABV beer and then take off again. The zone is only 10 meters long.

The best male beer-milers spend somewhere between 4 and 6 seconds in their first stop in the party zone; the best women stay for about 11 seconds. By their fourth time through — the beer mile requires four laps of running, four beers of chugging — the competitors slow. With shaky legs and winded lungs, these same men average about 14 seconds and the women about 31 seconds.1

But things are different at the Beer Mile World Championships, which were held here for the first time in early December. The champions drank their final beers almost twice as fast as the average elite runner in the competition — 7 seconds and 21 seconds for the male and female winners, respectively. In a race with the motto: “Chug, Run, Repeat,” the fiercest competitors guzzle through the party zone as fast as Olympic triathletes put on their post-swim socks.

Since its rather hazy inception at Burlington Central High School in Burlington, Ontario, in 1989, people from all over the world have attempted the beer mile: a four-lap, four-beer testament to just how insane elite runners really are. As the beer mile migrated south from Canada, the event gained traction on college campuses in the United States as an unofficial tradition to celebrate the end of track season, when young runners were in peak physical shape and seeking reprieve from a notoriously regimented sport.

Seanna Robinson, the former women’s beer mile world record-holder, went to Queen’s University in Kingston, Ontario, when the beer mile rules were still being ironed out. The competition still operates on the “Kingston Rules,” which outline the penalty lap that is incurred if a runner vomits before finishing. “The naked run, the Timbits challenge and the beer mile were just some of the many things we did that played at running and celebrating,” Robinson said. When Robinson started running beer miles at Queen’s University, women were only required to drink three beers, skipping the first. She argued for the beer mile to be the same for men and women.

At around the same time Robinson was pioneering for four-beer gender equality, and setting her longstanding record, Patrick Butler — at the time a member of the Wesleyan University track team — purchased the domain BeerMile.com. He’d seen the Kingston Rules online and wanted to adopt them in the U.S., as well as to create a place to aggregate and keep track of “official” beer mile results from all over the world. That was in 1998, and there were 452 beer miles logged on the site that year. Now there are about 40,000 total races — 4,439 of them coming this year (as of Dec. 3). 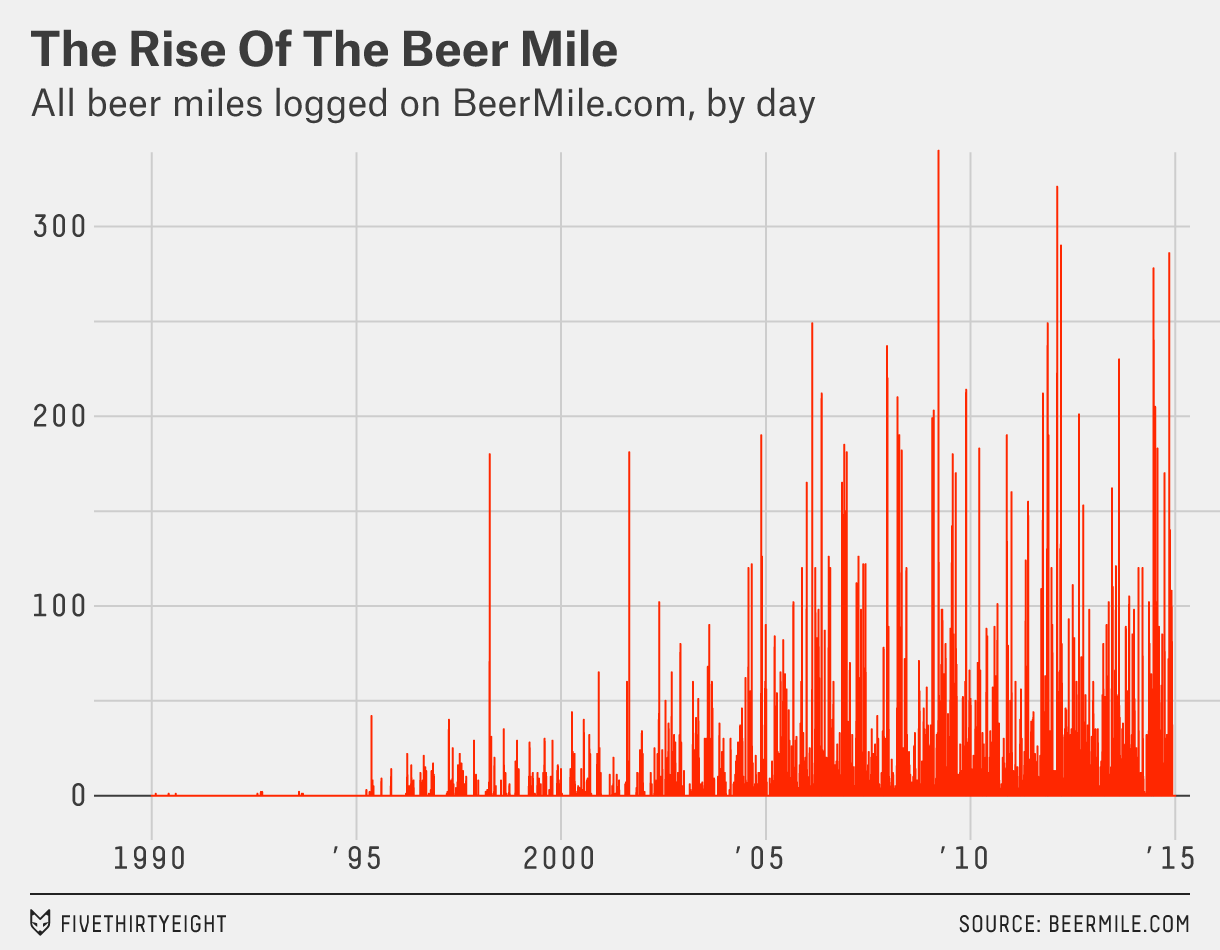 Butler knows the database isn’t complete — he estimates that less than 10 percent of beer mile results are actually submitted to the site. But it’s prominent enough that some competitors want out. “I probably get five or six emails a week from people saying, ‘Can you take my name off of your site? I’m trying to get a job,’” said Butler, who maintains the database himself as a passion project.

Nick Symmonds, an Olympic middle-distance runner, isn’t concerned about being associated with the beer mile. If anything, he’s a proponent of the sport. “Most people don’t know what a 1:42.9 in the 800 means — which is what I did at the Olympics — but they understand what a 5:19 beer mile is,” he told me in Austin. Symmonds runs professionally for Brooks and definitely does not need to run beer miles in his spare time — for the prize money or the notoriety — but he schlepped to Austin from Seattle to create continued interest in track and field. When asked why he came to the World Championships, he said, “There’s a chance they’ll continue to watch us in two years [at the 2016 Olympics].”

“Who’s got the legs, lungs and stomach to hold it all down?”

The bald announcer was trying to get the crowd going before the races began. The event was meant to be held at Yellow Jacket Stadium, a proper 1,600-meter indoor running track. But last-minute concerns from the track’s owners about the imminent binge-drinking forced the race to move to a motor-racing track on the outskirts of Austin. Beneath an empty grandstand with seating for thousands, what would be the homestretch of a Formula 1 race had been transformed into a makeshift track — an oblong oval marked off by orange construction cones. The turns were too tight and the straightaways too long, but for an event that is as much about drinking as it is running, it was good enough.

On the final straightaway loomed the party zone, straddled by two tables with beer lined up in rows of four. Each of the 117 participants got to choose his or her own beer, and the best runners could drink the night’s special “Beer Mile Brew.” Hops & Grain, a local Austin brewery and event sponsor, brewed the German-style blonde ale to contain only 2.2 volumes of CO2, down from a typical 2.6 volumes. Chuggability is critical in a beer mile.

The women were up first, adjusting track shorts-wedgies with one hand and holding their first beers with the other as they waited to start. When the gun fired, the group of twelve toned, lean women cracked open their cans. While drinking, they waddled like drunk penguins from the back of the party zone to the front, then took off running. In the crowd, some people were sporting shirts reading, “You just got beat by a mother of six.” They were the friends and family of Chris Kimbrough, a 45-year-old Austin local, who broke the women’s world record in October on her first attempt with a time of 6:28.6.

At the World Championships, though, Kimbrough was struggling; by the third beer she was doing that pre-vomit shiver that a body does when it wants to stop — and it would take her 32.3 seconds to finish beer No. 4. She stood no chance against Elizabeth Herndon, a 29-year-old professor and marathoner who came out of beer mile obscurity (and Ohio) to down her fourth beer, a New Belgium Fat Tire, in just 21.4 seconds. Herndon smashed the world record with a time of 6:17.8. Kimbrough placed fourth. 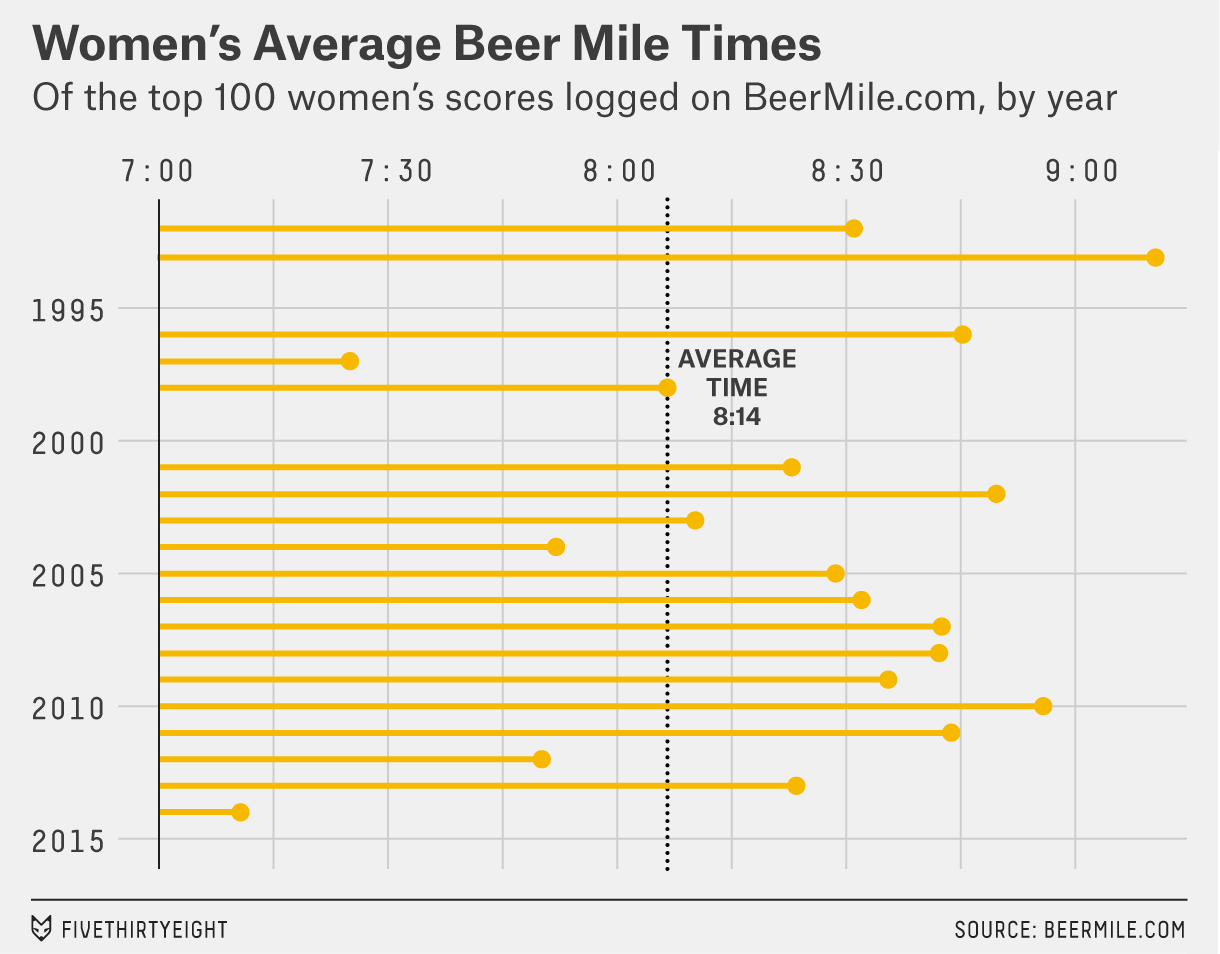 Just minutes after organizers rinsed away the liquid vomit from the women’s race, 10 tank-top wearing men lined up at the same starting line for the elite men’s final. One guy was wearing jorts.

James Nielsen, the highly contentious current world record-holder with a time of 4:57.0, was not among them. Nielsen said he “physically could not make it that week.” Others interpreted his absence as a clear indicator that he couldn’t defend his world record because it wasn’t legitimate.

In a video he posted to YouTube, Nielsen downs his second beer in less than four seconds — a feat that other beer milers say is physically impossible. Symmonds and fan-favorite Corey Gallagher were both vying to break the elusive sub-five minute beer mile, if only to put Nielsen in his place.

Bud Light Platinums featured heavily in the men’s elite race, and when the starting gun fired, iridescent blue bottles tilted skyward. Gallagher, wearing a single glove on his beer-chugging hand, downed the first in an astonishing 6.1 seconds, but coasted through lap one in 67 seconds (6 seconds slower than his final lap), allowing the guy in jorts to take the lead. But no one could drink like Gallagher. It didn’t take him longer than 10 seconds to finish any one beer, and with the final lap in sight he demolished his fourth beer faster than his previous two — in just 7.3 seconds. He rounded the last turn well ahead of the pack, the crowd screaming as he looked on pace to break 5 minutes. But he crashed through the finishing tape without breaking the threshold: 5.00.23. 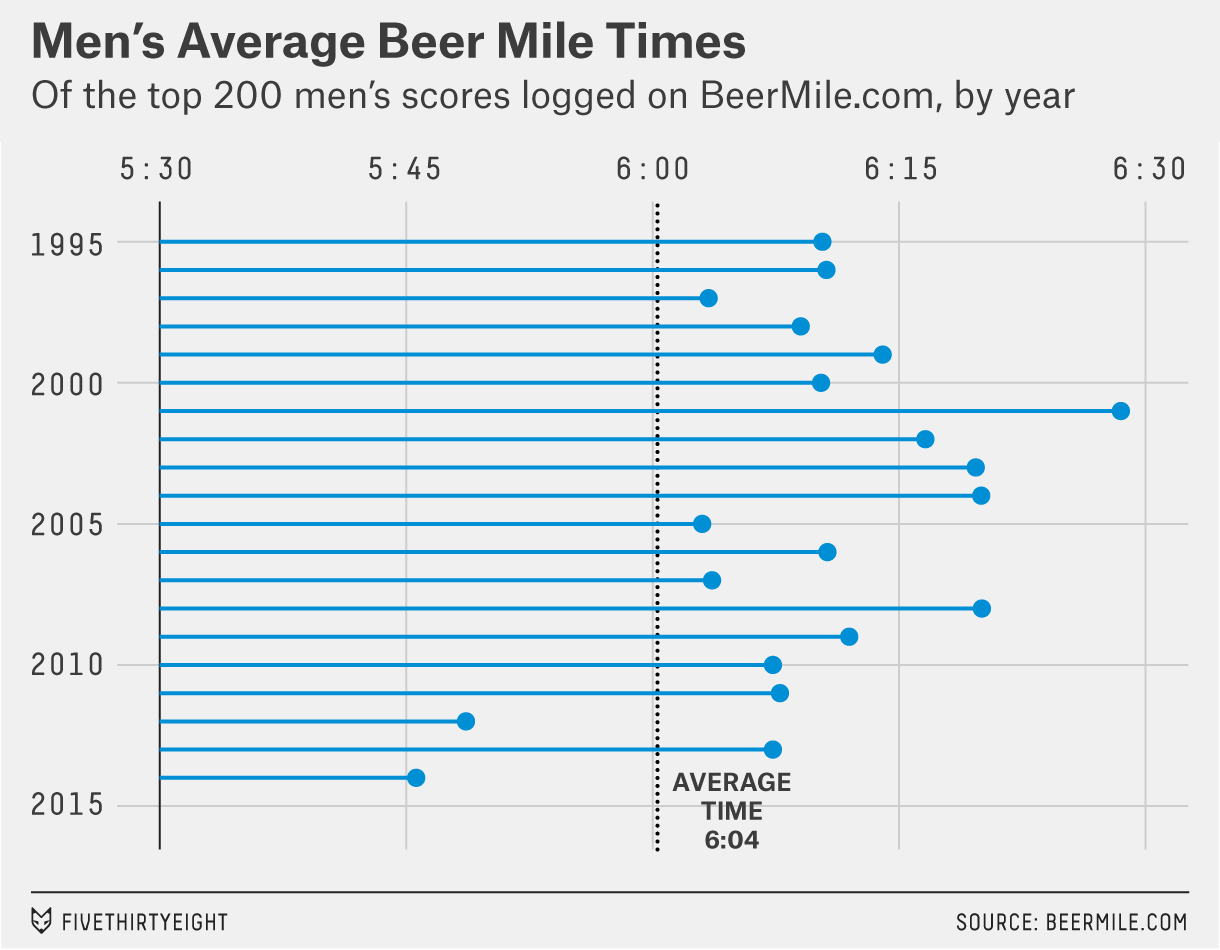 “This is the world record, James Nielsen is a cheat and a fake,” Gallagher declared post-race, swigging a replenishment drink from his silver plastic trophy.

Nielsen vehemently denies all accusations of cheating. “I think people can drink beers even faster than me,” he said when reached by phone. “I am definitely not the human limit on how fast a beer can be drank out of a can — I’ve seen faster.”

“This thing has been going on for 30 years with thousands of results and no one’s really paid attention, and then all of a sudden it’s on national news and people are noticing,” Nielsen said. The video of his world record-setting mile has been viewed 1.35 million times.

Some of the participants at the World Championships admitted to running the beer mile in part to dispel the myth that elite runners are some strange breed of nutrition-obsessed freaks. “People think we hang out in a cabin eating chia seeds,” said 42-year-old Luis Armenteros, who placed third in the men’s sub-elite division with a time of 6:03.2. “I can’t drink everyone under the table, but I can drink a lot.”

“There is the perception that elite runners are machines whose bodies are temples, but we have our vices,” said Jack Colreavy, a 25-year-old runner who traveled from Sydney, Australia, to race in the elite men’s group, but who was unable to finish. “And mine is drinking beer.”