Two days after Thanksgiving, the Miami Hurricanes closed out another mediocre regular season with what the Miami Herald called a “dismal downer” of a game. They never led Pitt in the 35-23 defeat, and many UM faithful streamed out of Sun Life Stadium with almost an entire quarter left to play. Miami will appear in a postseason game this month because it has a just technically bowl-eligible 6-6 record (and it’s a well-known university). But the Duck Commander Independence Bowl in Shreveport, Louisiana, is not exactly a destination befitting a program that was once college football royalty.

Cycles of boom and bust, however, are nothing new in Coral Gables. This Saturday, ESPN is airing “The U Part 2,” a “30 for 30” by director Billy Corben that follows up on his 2009 documentary about the Hurricanes’ dominant, lawless football program of the 1980s. The sequel explores the process that rebuilt the scandal-ridden team into what would become, statistically, the most talented — if not quite the most dominant — team in college football history.

Before the Hurricanes came back from the brink, they were as low as they are now. Miami’s mid-to-late 1990s deterioration reached its nadir at the end of 1997, the program’s first losing season in 18 years. When the final whistle blew on that campaign, Miami had a +3.8 Elo rating,1 which means Miami would have been favored by just 3.8 points against an average FBS team on a neutral field. To use 2014 teams as a comparison, Miami was the equivalent of this year’s Colorado State or Navy teams — a far cry from their dominant squads of the 1980s and early 1990s. (Although this year’s team is even worse, with a rating of +2.0.)

This is what happens when a program transgresses enough NCAA rules to deserve its own documentary. During the late 1980s and early 1990s, the Hurricanes’ violations ranged from a pay-for-play scandal to a UM academic adviser helping players defraud the federal government of Pell Grant money. When the NCAA was finished handing down its penalties, the Hurricanes had been banned from the postseason for a year and stripped of 31 scholarships from 1995 to 1997.

For college football teams, scholarships are currency. There’s a clear relationship between a team’s recruiting success and its on-field performance, and in the wake of the sanctions, Miami was unable to recruit as effectively as it had during the early 1990s.2

But under Butch Davis, the Hurricanes had figured out how to rebuild. From creative accounting to get around the scholarship limits — Davis persuaded wide receiver Santana Moss (among others) to run track on scholarship for UM while walking onto the football team — to rummaging through the recruiting bin for undervalued prospects, Davis amassed a talent collection better than college football has ever seen before or since. If we judge the players by where they were drafted in the NFL, tally the expected future approximate value for players picked in that slot, add it up for each school by each historical draft class, and assign a weighted sum of the previous four years to each college team-season,3 the Miami teams built by Davis and eventually coached by his successor, Larry Coker, are in a universe unto themselves.

The single most talented college roster of the past 48 years, according to this measure, was the fabled 2001 Miami Hurricanes, who went 12-0 and won the BCS title while posting one of the best point differentials (+395) of any national champion. Davis-built Miami teams in 2000 and 2002 also rank third and fourth, respectively. 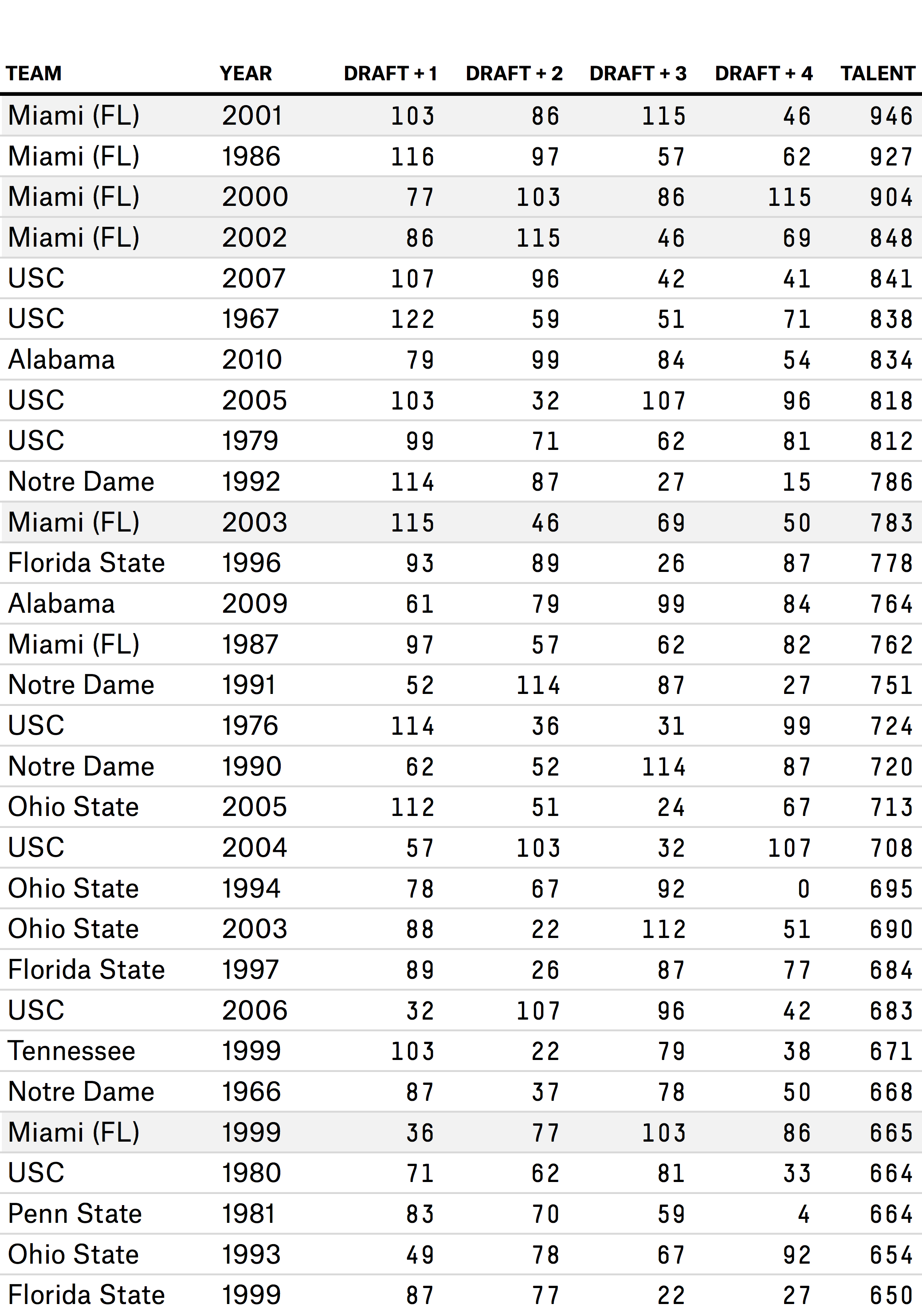 The Hurricanes turned their unprecedented collection of talent into a one-loss 2000 team (which media-poll voters thought should have played undefeated Oklahoma for the national championship instead of Florida State, whom Miami had beaten earlier in the season); a historically dominant, unbeaten national champion in 2001; and a 2002 squad whose sole loss came in double overtime of the BCS title game.

“You could have taken that 2001 [Hurricanes] team and put them in the NFL,” former Hurricanes safety Antrel Rolle told Corben, “and without a doubt they would have made the playoffs.”

It’s probably the closest such a sentiment has ever come to actually being true. Then again, as stacked as the Davis/Coker Hurricanes were in terms of skilled athletes, and as impressive as their 34-game winning streak4 was, it’s difficult to argue they would have torn up the pros when they barely cracked the top 10 in terms of the highest modified FPI ratings by college teams in the past three decades.

That mark represents the 10th-highest rating achieved by any team since 1982, but it trails entries from some of college football’s other most celebrated dynasties — including the 1990s Nebraska Cornhuskers, the 2000s USC Trojans, the 2008 Florida Gators, the 2012 Alabama Crimson Tide and even the 1988 Miami Hurricanes. 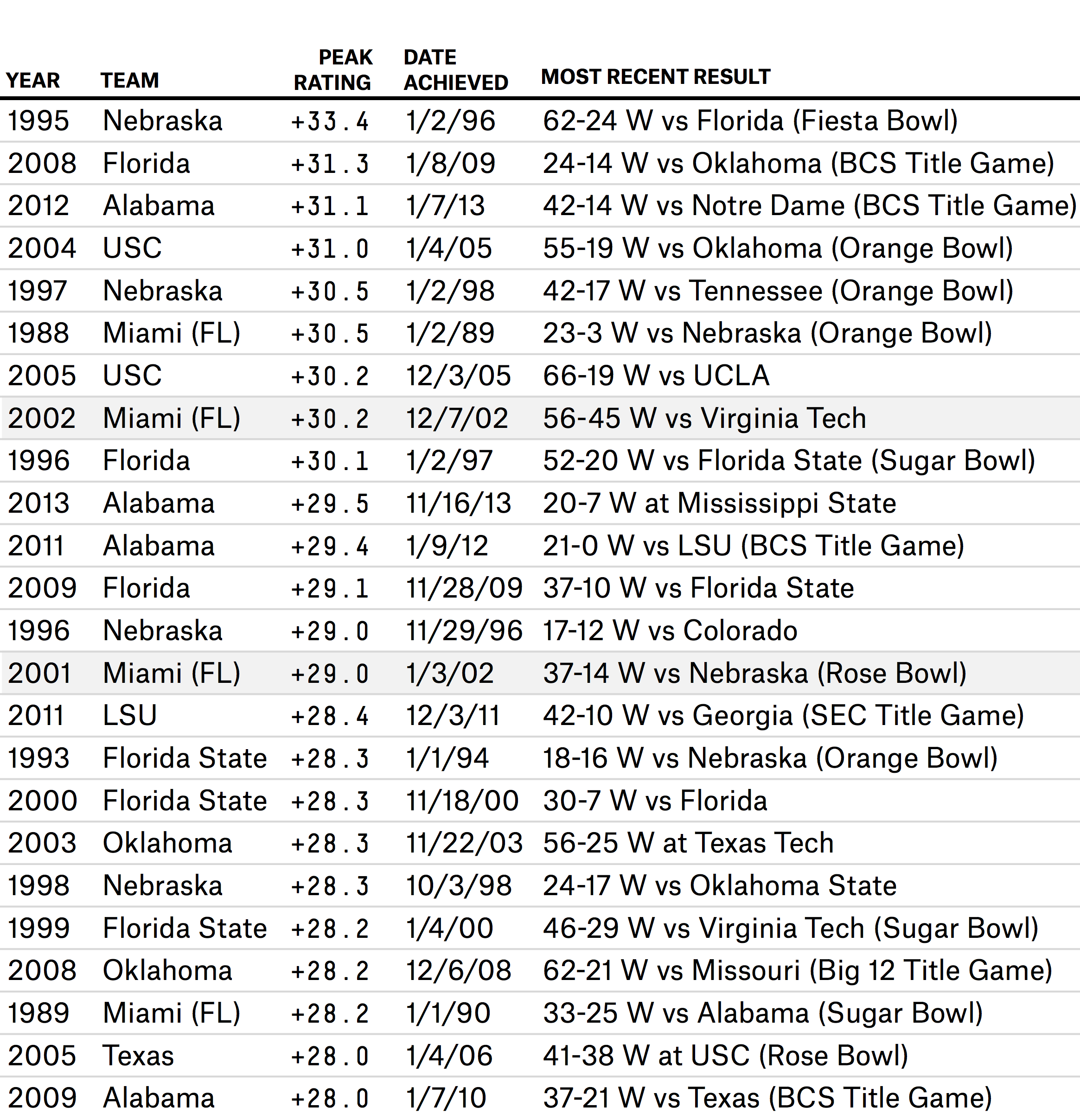 There’s also the tricky matter of how the Hurricanes’ second golden era ended, marred by yet another scandal. While the program was ultimately assessed lighter penalties than it had received in the mid-1990s, in some ways that was due as much to the NCAA’s botched investigation as it was an absolution of Miami’s violations.

And now the Hurricanes are back in the muck. But if there’s good news for Miami, Corben’s documentary underscores just how volatile this program has been over the past three decades. Of the top 18 FBS programs (by Elo rating) since 1982, Miami has by far the widest distribution of end-of-year Elo ratings.5

In other words, the team tends to seesaw between greatness and mediocrity. And while life at “The U” has its peaks and valleys, if the story of Corben’s second Miami film is any indication, the next Hurricane dynasty might be just around the corner, no matter how bad things seem in the present.