While the Los Angeles Lakers have endured a (predictably) poor start to the 2014-15 season, their future Hall of Famer Kobe Bryant continues to rack up individual milestones. In one game last month, he picked up his 20th career triple double and became the first player in league history to record 30,000 career points and 6,000 career assists. And after a 32-point outburst Tuesday night, Bryant moved to within 30 points of Michael Jordan and third place on the NBA’s all-time scoring list — meaning Bryant could pass Jordan in the Lakers’ Friday night game against the San Antonio Spurs.

Jordan has always been an easy comparison for Bryant. The two men play the same position (shooting guard), are built similarly (both stand 6 feet 6 and weigh about 200 pounds), seem to possess the same maniacal work ethic, and even have similar-looking games. Bryant’s championship count, five, even rivals Jordan’s six. In the minds of many fans, Bryant is the closest to Jordan the game has seen since Jordan retired for good in 2003.

Statistically, though, there’s never really been much of a comparison. According to most advanced metrics, Jordan was better than Bryant at both ends of the floor. (This is true even if we restrict both players to the same block of seasons by age so we’re comparing apples to apples. Kobe entered the NBA at age 18, and he’s 36 now; Jordan played from age 21 to 34, retired and played again from age 38 to 39. So their overlapping years are 21 to 34.) 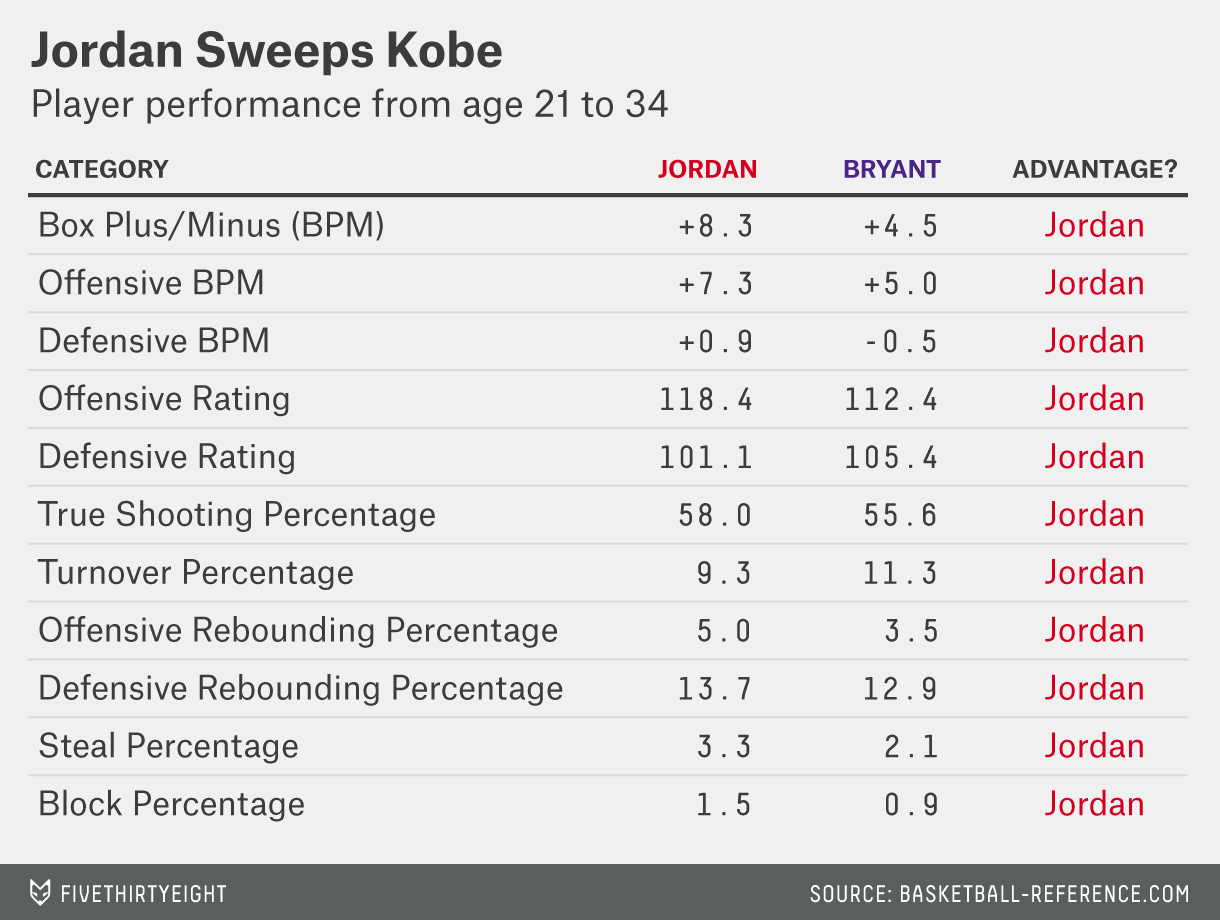 Offensively, Bryant can’t hold a candle to Jordan, mainly because of a disparity in efficiency. After translating both Jordan’s and Bryant’s stats to a league-wide offensive efficiency level of 106 points per 100 possessions to account for the changes in the game (the NBA’s overall average since it merged with the ABA in 1976), Jordan posted an offensive rating of 118.4 between the ages of 21 and 34, while Bryant put up a rating of 112.4. For a top scorer like Bryant or Jordan, an offensive rating boost of six points per 100 possessions can mean an extra four wins for his team in an 82-game season.

Because of an effect known as “skill curves,” it can be misleading to directly compare efficiency numbers between players with different offensive responsibilities. (This is why Steve Kerr and Fred Holberg aren’t better offensive players than Allen Iverson and Carmelo Anthony, for instance.) But Jordan’s and Bryant’s roles were of roughly the same, so it’s a fair comparison; between the ages of 21 and 34, Jordan used 31.9 percent of the Chicago Bulls’ possessions while on the floor, while Bryant used 31.6 percent of the Lakers’ possessions when he was in the game. In other words, with essentially the same volume of the offense being directed through each player, Jordan was just a lot more efficient than Bryant at turning possessions into points.

Why? Jordan shot the ball more accurately than Bryant, with a true shooting percentage of .580 to Bryant’s .556 — and that number even includes Bryant’s superior three-point shooting (particularly by volume) and a slight edge to Bryant at the free throw line as well. This means Jordan’s shooting advantage was almost totally driven by a better success rate on 2-pointers, where he crushed Bryant 52.0 percent to 48.5 percent despite the high likelihood that Bryant has taken more shots closer to the rim than Jordan did. (Even though a much larger proportion of Bryant’s shots came from three-point territory, Bryant’s rate of drawing fouls per shot attempt — a good proxy for how close to the basket a player is taking his shots — was higher than Jordan’s.)

Jordan also protected the ball much better than Bryant. Between the ages of 21 and 34, Jordan turned the ball over on just 9.3 percent of his possessions, the best rate ever among players with such a high volume of shooting. Bryant isn’t exactly careless with the ball, but Jordan’s combination of a high usage rate, great shooting efficiency, a good assist rate and a microscopic rate of turnovers is what makes him arguably the best offensive player of the NBA’s post-merger era.

Even when coupled with usage rate, it’s possible for individual efficiency numbers to belie a player’s true offensive contribution. A more sophisticated approach to measuring a player’s effect on his team’s offense can be found in statistical plus/minus metrics like Daniel Myers’s Box Plus/Minus (BPM). By that measure, Jordan helped his teams’ offenses by about 2.3 more points per 100 possessions than Bryant did between ages 21 and 34. We can’t be sure what a player’s actual on-court impact was before 2001 because we don’t have play-by-play data, but this reconstruction of regularized adjusted plus/minus for the 1990s (using box score and quarter-by-quarter score data) estimates that Jordan was, by far, the best offensive player of that decade. (By contrast, Bryant’s offensive impact ranks fourth relative to his peers.)

Meanwhile, on defense Bryant looks like the Derek Jeter of the NBA — soaking up defensive accolades on reputation rather than performance. Over his career (which includes 12 All-Defensive team nods) the Lakers have only been 0.6 points per 100 possessions better than average defensively, and Bryant’s long-term regularized defensive plus/minus of -0.9 is below average. Synergy Sports, the video-tracking service that classifies every play a player is involved in, has the most favorable view of Bryant defensively but still considers him to be just a 55th percentile defender on aggregate since it began tracking full-season data in 2006-07 (a span over which Bryant was named to six All-Defensive squads).

We don’t have Synergy numbers for Jordan defensively, but what evidence we do have suggests that he was better than Bryant at that end of the court. Jordan posted higher rates of steals, blocks and defensive rebounds than Bryant, and team-based defensive metrics like Dean Oliver’s defensive rating consider Jordan far superior (101.1 to 105.4; lower is better on defense) over the age 21 through 34 span after translating for era. Furthermore, the defensive component of Myers’s BPM lists Jordan as saving about 1.4 points per 100 possessions relative to Bryant (whom the metric considers a below-average defender). And while Jordan was in the top 12 percent of 1990s defenders by the aforementioned reconstructed plus/minus rating, Bryant was in the bottom 42 percent of his peers in defensive regularized plus/minus.

Bryant will catch — and pass — M.J. on the all-time scoring list soon, but that shouldn’t be taken as an indication that Bryant has been a better basketball player than Jordan. To the contrary, the best statistical evidence at our disposal shows there really isn’t any legitimate way to make the argument for Bryant’s superiority. It’s only natural to hold the two players up side by side because of their superficial similarities, but a serious breakdown of the numbers renders all of those comparisons silly — the better player is Jordan, in a landslide.