On Oct. 27, 2013, Dres Anderson’s cell phone began lighting up with text messages from friends imploring him to turn on the Cowboys-Lions game. Detroit receiver Calvin Johnson, they explained, was having an impossibly prolific day. By late in the fourth quarter, the All-Pro had gained 290 receiving yards.

To Anderson, this more or less constituted a family emergency. After all, his father was Willie “Flipper” Anderson, the former Rams wideout who had set the record Johnson was chasing. In a primetime clash against the Saints on Nov. 26, 1989, Flipper had piled up 336 receiving yards, eclipsing the single-game NFL record of 309.

Almost a quarter-century later, Flipper’s record was on the verge of being broken. “I’ve never rooted for the Cowboys in my life,” Dres tweeted that afternoon last fall, “but I pray they hold down Megatron for these last two minutes!!!”

His prayers were answered. Despite hauling in two long passes during his team’s final, game-winning drive, Johnson finished with 329 yards, seven short of Flipper’s mark. “I thought it was going down,” Dres said recently. “Thankfully it didn’t.”

It’s been 25 years since his historic night, and since then Flipper Anderson has become a piece of obscure sports trivia. He once even popped up as the answer to the $125,000 question — “What NFL player holds the record for most receiving yards gained in a single game?” — on a Super Bowl week episode of “Who Wants to Be a Millionaire?”1 But reducing the accomplishment to game show fodder undersells its brilliance. Before defense-hindering rule changes and sophisticated scoring strategies led to the arcadization of offensive statistics, Anderson made “Tecmo Bowl” come to life.

“Those weren’t short easy passes,” said then Rams quarterback Jim Everett. “He was going up in traffic, pulling them down and beating the corner. He had a special night.”

How special? In 1989, Anderson’s teammate Henry Ellard averaged an NFL-best 98.7 receiving yards per game. In games where pass catchers had at least one reception, those catchers averaged 34.6 receiving yards.2 Anderson’s night was 9.0 standard deviations from the average. 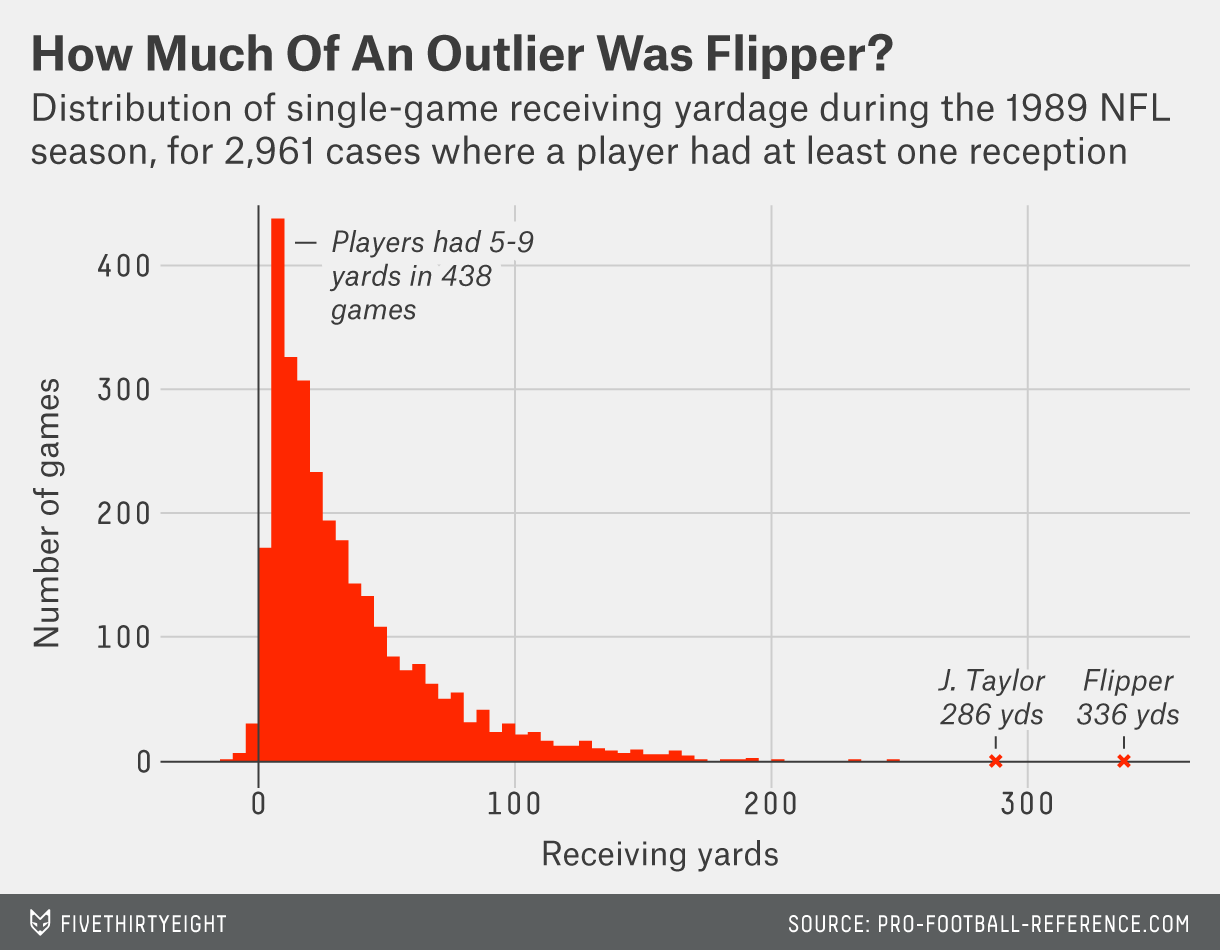 Football Outsiders editor-in-chief Aaron Schatz, whose site has compiled extensive data from every NFL season going back to 1989, said Anderson had “the best game of any receiver in our advanced stats. Period. By a significant amount.” To measure individual offensive output, FO uses a metric called Defense-Adjusted Yards Above Replacement. That evening in New Orleans, Anderson racked up 160 receiving DYAR, the most in at least the last 25 years. Jaguars receiver Jimmy Smith’s 141 DYAR in Week 2 of the 2000 season is the second-best total. The gap between those two performances is almost the difference between Smith’s and the list’s 10th best.3 As Schatz reminded me: “That’s a big gap.” 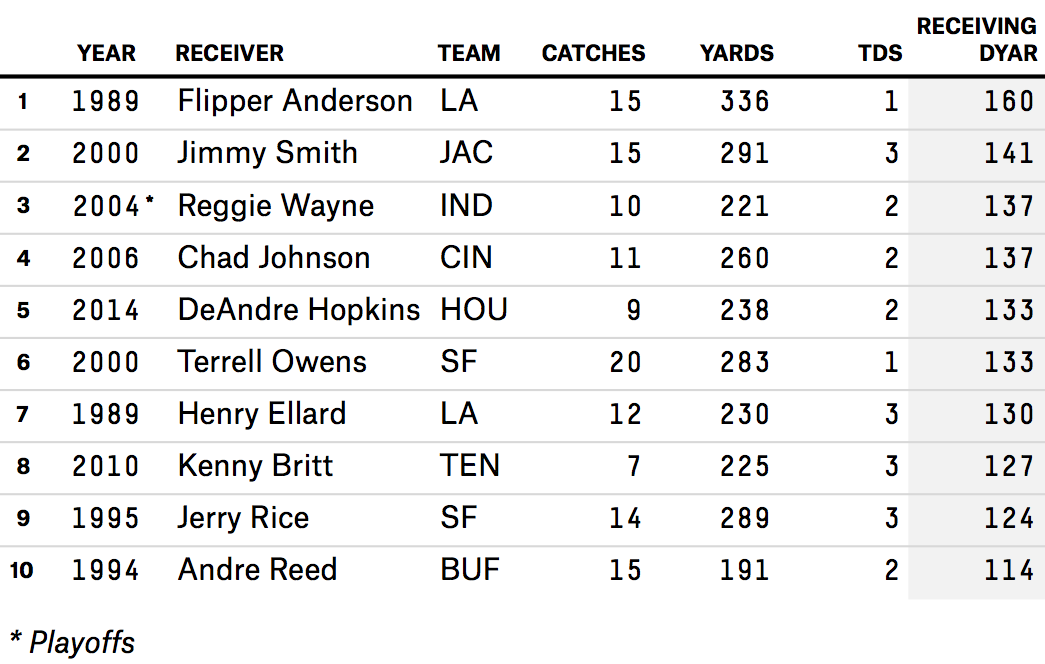 The numbers show how impressive Anderson’s record was, but they don’t show the spectacular way he set it. For that, let’s go to the tape.

The tape? It’s been a while since Anderson, now 49 and long retired from football, has seen it. There’s a VHS copy buried somewhere in his house, but like most of us, he no longer owns a VCR. Still, sharp memories remain. “Everything that was thrown to me,” Anderson said, “I just caught.” He recalled thinking afterward: This is what Michael Jordan must feel like.

Until then, nobody would’ve dared compare him to MJ. Dubbed “Flipper”4 as a baby by a relative who thought his crying made him sound like the famous dolphin, Anderson grew up in South Jersey and eventually became one of Troy Aikman’s favorite targets at UCLA. The Los Angeles Rams5 took the receiver in the second round of the 1988 NFL draft, but he caught only 11 passes his rookie season. Anderson entered his second year third on the depth chart behind Aaron Cox (a first-round pick in ’88) and Ellard (a two-time first-team All-Pro). Then came an opening.

At practice two days before the Rams faced the Saints that November, Ellard strained his right hamstring. This led to what seemed like an unsolvable problem. He led the NFL in receiving yards — nobody could fill his role. With Ellard on the Superdome sidelines in a blue Rams sweatshirt and a baseball cap, Anderson slid into the injured star’s spot. “Most of the time during the game it was kind of tough getting our timing down,” Everett said.

Flipper was a fill-in, but unbeknownst to many, he already had proven himself capable of producing highlight-reel material. Over the first 11 games of the 1989 season, he only had 19 receptions, but averaged a league best 30.7 yards per catch. Generously listed at 6 feet and 172 pounds, Anderson could fly. “From the minute he got there until the minute he left,” said Hall of Fame offensive tackle Jackie Slater, his Rams teammate from 1988 to 1994, “our DBs used to say, ‘If I can cover Flipper Anderson on a go [route], I can cover anybody.’”

The Rams (7-4) needed something out of him while facing an NFC West rival that sat one game behind them in the standings. The Saints were ferocious. They boasted four Pro Bowl linebackers: Sam Mills, Vaughan Johnson, Pat Swilling, and future Hall of Famer Rickey Jackson. “They were just ass kickers,” said Rams kicker Mike Lansford, whose bare right foot6 ended up heavily factoring into the proceedings.

“Our weakness,” said former Saints cornerback Robert Massey, “was in the secondary.” Through 11 weeks, the Saints had the top-ranked run defense in the NFL. On the other hand, their pass defense ranked 22nd.

ESPN aired Sunday night NFL games at the time, and before kickoff, analyst Joe Theismann explained to the audience that in Ellard’s place “Cox can do a real good job” and that if L.A. used a four-receiver set, tight end Pete Holohan would be split out wide. Theismann never mentioned Anderson.

For most of the night, the Rams looked hopeless. They piled up penalties, committed turnovers, and allowed Everett to take some nauseatingly vicious hits. With the Saints leading 17-3 in the fourth quarter, New Orleans defensive lineman Jumpy Geathers recovered Rams running back Greg Bell’s fumble. Everett said that across the country “you could hear every television click off.”

If the game had ended at that moment, it still would’ve been a special night for Anderson. In 55 minutes of action, he had tallied career highs in catches (8) and yards (171). But then he caught a 46-yard pass and the Rams soon scored, making it 17-10. On the next Rams possession, Everett threw a 15-yard touchdown pass to Anderson and it was tied.

When the game reached overtime, L.A. simplified its strategy. “I didn’t care if they had two guys over there,” Everett said, “I’m finding a way to get it to Flipper.” By then, Anderson had 13 catches for 296 yards.

During the Rams’ first overtime drive,7 Anderson caught a short pass on a crossing route, shook trailing Saints cornerback Toi Cook, and sprinted toward the sideline for a 14-yard gain. ESPN play-by-play announcer Mike Patrick quickly perked up. “Flipper Anderson has just set an NFL record: 310 yards receiving,” he said. “What a marvelous night.” Anderson erased a mark made by his friend, Chiefs receiver Stephone Paige, who in 1985 racked up 309 receiving yards in a game against the Chargers. But Flipper wasn’t finished.

On third-and-11 from the Saints’ 40, Anderson lined up outside. After the snap, he made a quick inside move to gain a step on cornerback Milton Mack then ran straight ahead. Everett’s throw came high and fast, so he jumped up to corral it. With legs splayed and arms fully extended, the bare-handed Anderson made a fingertip grab. It was his best catch of the night.

Saints defensive backs Mack and Dave Waymer tackled Anderson, but not before he reached the 14 yard line. At that moment, Anderson rolled over on his back and looked up at Waymer, who was standing over him. “I was just done,” Anderson said. “They had to come get me off the field.”

He eventually made it to the bench, where cameras caught Ellard congratulating him. On the very next play, Lansford hit a 31-yard field goal to give the Rams a 20-17 victory.

What you don’t see in the above clip is the way ESPN closed the broadcast. It being 1989, the network cut to a quick shot of Anderson flashing the “I’m number one!” sign followed by a freeze frame of the record-setting receiver and teammate Aaron Cox leaping together for a giant high-five.

To those involved, processing the events of that evening 25 years ago still requires some suspension of disbelief. Anderson’s 336 receiving yards made up 29 percent of his season total.

Anderson’s performance may have seemed workmanlike, but it was anything but. “There was no one better than Flipper that night,” said Everett, who in that game8 targeted the receiver 20 times. The numbers are still staggering: 13 of Anderson’s 15 catches produced a first down or a touchdown, and the ones that didn’t were still important: one went for 16 yards on second-and-20, and another went for 26 yards on second-and-32. For the most part, Anderson wasn’t simply turning short throws into big gains. By my count, 107 of his 336 yards came after the catch. In today’s NFL, where quick passing has all but replaced the running game, his screw-it-I’m-going-deep style would be rare. His 20.1 career yards per reception still ranks fourth in league history.

Amazingly, Anderson’s 336-yard game wasn’t his most memorable accomplishment of that season. On Jan. 7, 1990, in overtime of a divisional playoff game against the Giants at the Meadowlands, he caught a 30-yard touchdown pass, and without breaking stride, ran into the tunnel and into the visitors’ locker room.9

Anderson played five more full seasons and parts of three more, gaining 100 or more yards in a game seven more times in his career, but never coming close to matching his performance in the Superdome. Then again, few have. Since November 1989, Terrell Owens (283), John Taylor (286), Jerry Rice (289), Jimmy Smith (291) and Johnson (329) all approached 336, but the record still belongs to Flipper.

These days, he lives in the Atlanta area, coaches youth football, and follows his son Dres’s career. The University of Utah senior receiver, who recently suffered a season-ending knee injury, is an NFL prospect. If there’s one person Anderson would like to see rewrite the family history, it’s Dres. “It’s waiting there for you,” he’s told him. “Go get it.”

Alan Siegel is a writer in Washington, D.C. You can contact him at asiegel05@gmail.com. @AlanSiegelDC