The last four teams standing are exceptional. The Ducks, Crimson Tide and Buckeyes rank Nos. 1, 2 and 3, respectively, in ESPN’s Football Power Index (FPI). And although the Seminoles have been unconvincing throughout the season, it would have been difficult to justify leaving the undefeated, defending national champion out of the playoff — No. 10 FPI ranking be damned. So, the committee may well have made the best decision it could have, according to its mandate to select the nation’s four best teams.

But by ranking TCU third (ahead of both Florida State and Ohio State) the week before the conference championships, the committee also set itself up to violate the precedent of how college football rankings have always worked. That’s why, even after previous No. 5 Ohio State rolled over No. 13 Wisconsin 59-0, the FiveThirtyEight College Football Playoff model — which is based on a historical analysis of Coaches Poll voters’ tendencies — saw little chance that TCU would drop from third place to fifth or lower in the committee’s final rankings.

Using the traditional media polls as a guide, that was a reasonable assumption. Since the advent of the Bowl Coalition in 1992, only four times (in 214 opportunities) did the third-ranked team in the AP poll drop below fourth place the week after it won a game over an FBS opponent. All four of those teams (Florida State in Week 1 of the 2002 season, Ohio State in Week 3 of 2003, Tennessee in Week 1 of 2005 and Ohio State in Week 2 of 2008) posted victory margins that underwhelmed their pregame FPI expectations. By contrast, TCU beat its pregame expectations by 19 points in thrashing Iowa State. (And it bears repeating that none of those cases took place any later than the third week of a season, when you would expect voters to still be sorting out the order of teams.)

And yet TCU did drop in the committee’s rankings — from third place to sixth, below Florida State, Ohio State and even Baylor (whom the committee had controversially slotted beneath TCU in every previous edition of its rankings, seemingly ignoring the Bears’ head-to-head victory over the Horned Frogs on Oct. 11). It was a stunning fall that, for better or worse, seemed to contradict the way college football teams traditionally move in the rankings.

TCU’s exclusion also broke with tradition from another standpoint. Using poll data since 1992, I ran a logistic regression attempting to predict whether a team would finish the regular season in the AP’s top four based on various “résumé” statistics provided by ESPN’s Stats and Info Group. The factors that emerged as significant were a team’s winning percentage (modified slightly by Laplace’s Rule of Succession), its average points-per-game margin, its strength of schedule (according to the average FBS team’s expected winning percentage against its schedule using FPI), and whether it won its conference or not.

This year, those criteria would have yielded the following probabilities of making the top four (assuming the committee would follow the pollsters’ traditional logic): 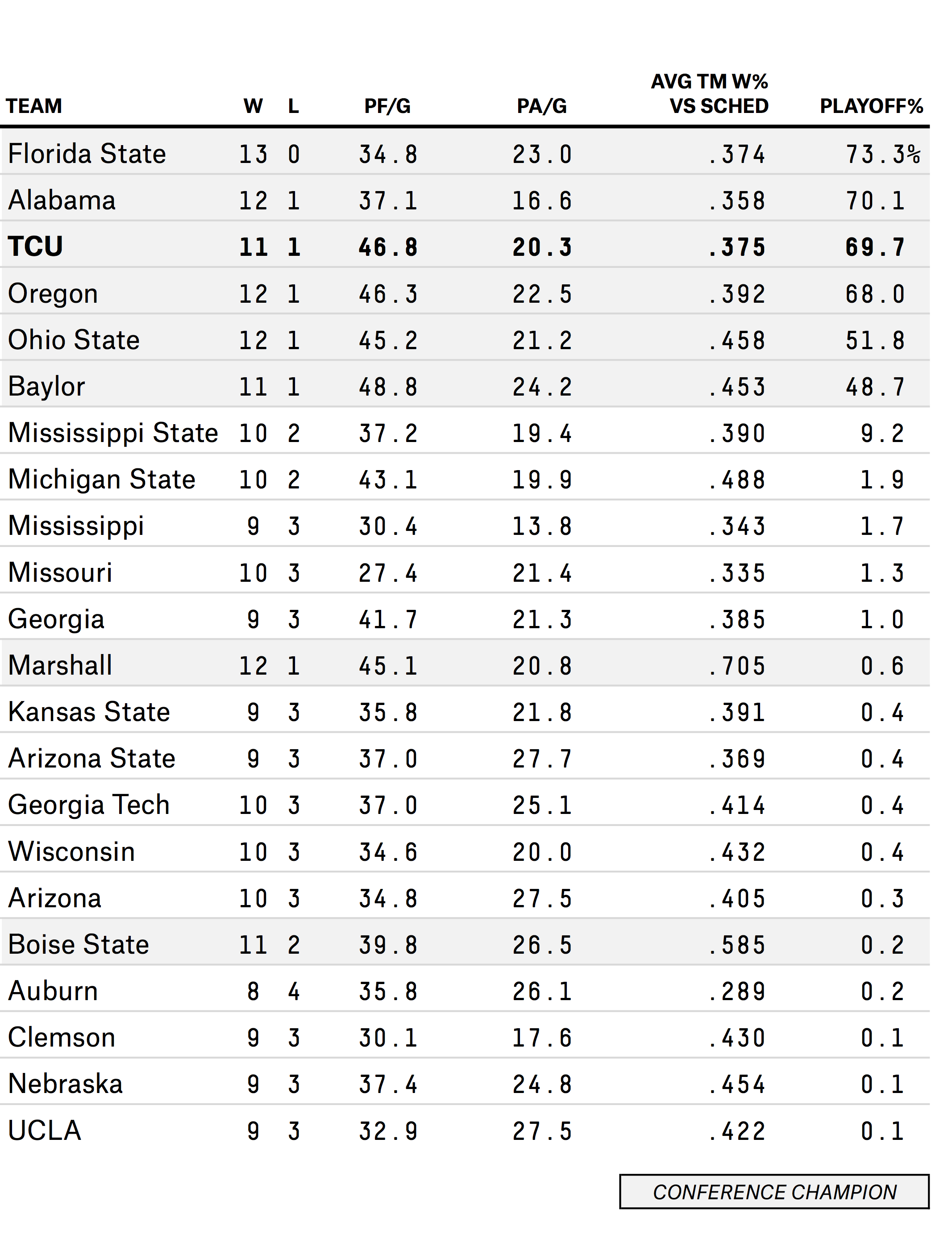 (Note: Baylor and TCU were co-champions of the Big 12; for the purposes of the regression, they were each treated the same as a team that was sole champion of its conference.)

It’s not outside the realm of plausibility that historical voters would exclude TCU and include Ohio State on the basis of their résumés alone (this method shows there was a 16 percent chance that would happen). In fact, the real AP poll dropped TCU from fourth to sixth, with two teams (Baylor and Ohio State) hurdling the Horned Frogs.

It is, however, another way to underscore that the playoff committee may be rethinking the way college football teams have been ranked at the end of the season. As FiveThirtyEight’s editor in chief, Nate Silver, wrote in his final assessment of the committee’s selection, the sport’s old algorithm rarely entailed a top-to-bottom reassessment of the field this late in the year (voters usually just made slight adjustments to teams’ rankings after losses or big wins; otherwise the current rankings were basically enslaved to the previous rankings). The committee’s final rankings, on the other hand, suggest it sorted the teams from scratch after the conference championships, with no allegiance to its previous choices.

That’s not necessarily a bad thing. But, like the existence of a playoff in the first place, it’s a new thing.