We ran the FiveThirtyEight college football playoff model in the early hours of Sunday, after Ohio State and Florida State won their conference championship games. It found there is some actual drama in how the teams might be ranked by the selection committee later Sunday. Ohio State’s 59-0 win over Wisconsin in the Big Ten Championship was just the sort of performance that could compel the committee to think about whether the Buckeyes ought to get in ahead of Florida State or TCU in the four-team playoff.

Here’s how the model has the playoff odds: 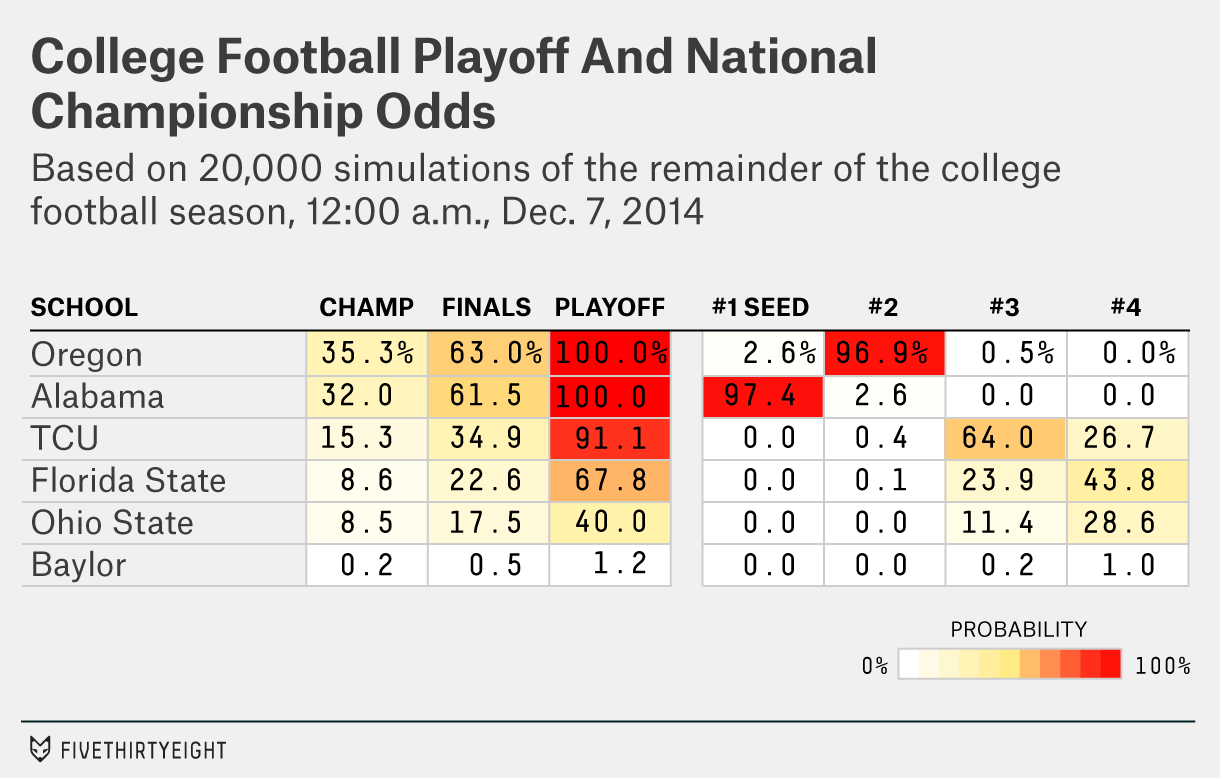 As I mentioned earlier, I think the model is too sure about TCU and too bearish about Florida State. Florida State’s win over Georgia Tech for the ACC championship came by a narrow margin, but Georgia Tech was a formidable opponent. TCU won by a more impressive scoreline — 55-3 — but that win was against an awful opponent, Iowa State. Perhaps more importantly, the Seminoles are undefeated this season and have won 29 consecutive football games.

That the committee chose to promote TCU to No. 3 last week (ahead of Florida State) may turn out to matter. Had TCU stayed at No. 4 — and Florida State at No. 3 — the model would have Ohio State favored to surpass the Horned Frogs and join Alabama, Oregon and Florida State in the playoff.

I agree with the model’s view that Baylor’s chances of making the playoff are remote, despite it having beaten TCU on Oct. 11. Had the committee thought the head-to-head win outweighed everything else, it would presumably have had Baylor rated ahead of TCU to begin with. More troublesome for Baylor: The committee could sidestep the argument about the head-to-head result by excluding both Big 12 teams from the playoff and instead going with Alabama, Oregon, Florida State and Ohio State.

We did want to issue a final forecast on how the committee might rank the entire Top 25, accounting for Boise State’s post-midnight victory in the Mountain West championship game, along with the wins by Ohio State and Florida State. The rankings could potentially affect the rest of the college football bowl lineup even if they don’t have implications for the top four. Those numbers are below: 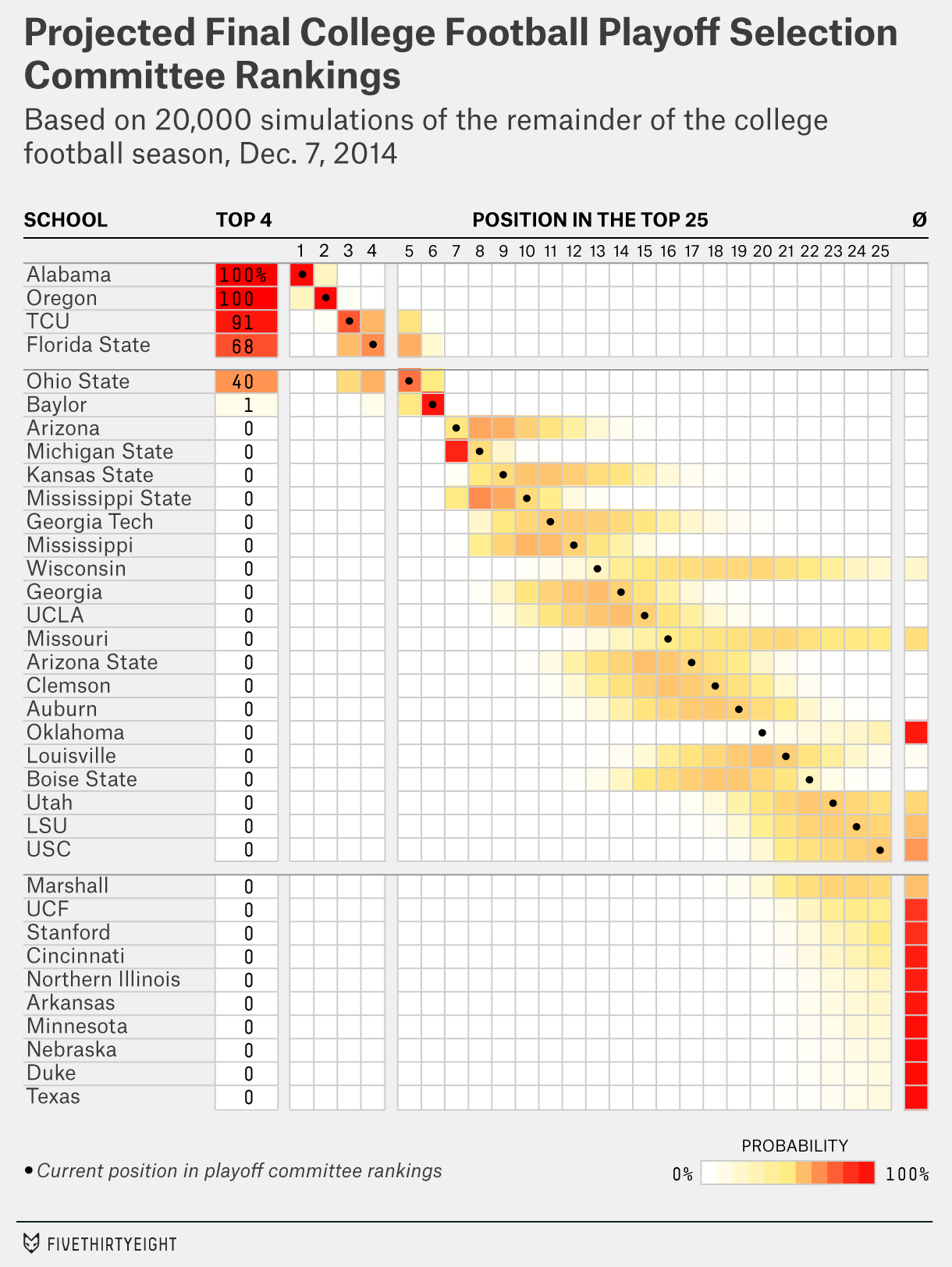 It’s interesting to contemplate which teams would make the playoff if six or eight teams were allowed to qualify for it instead of four. We’ll have more to say about this later, but this year’s messy outcome wasn’t necessarily a fluke. On average since 1996 (a year that arguably ushered in the “modern” era of college football; it was when the Southwest Conference dissolved and the sport adopted its overtime rules), there have been six teams that finished with zero or one losses from a “major” conference or went undefeated in another conference. These are the teams that would usually receive the most serious playoff consideration. Sure, this is an imperfect metric — sometimes you’ll have a two-loss team (like Stanford in 2013) that played such a tough schedule that it deserves to be considered for the playoff. Sometimes you’ll have one-loss team from a major conference that played such a soft schedule that it doesn’t have many excuses for having that one loss. But fundamentally, a four-team playoff when there are five “major” conferences is liable to be problematic.

A six-team playoff would be easy as pie this year: Alabama, Oregon, TCU, Florida State, Ohio State and Baylor would be almost certain to qualify in some order. An eight-team playoff would be more interesting: Michigan State and Mississippi State would be the most likely candidates to be the extra teams, but Mississippi and Arizona could make an argument. No number of playoff teams — from two to 16 — is going to be perfect. But a four-team playoff may prove especially dissatisfying.

CORRECTION (Dec. 7, 11:42 a.m.): An earlier version of the full final ranking table was incorrect. For teams currently ranked Nos. 5-25, the projected “position in the Top 25” squares were displaying simulations from before this weekend’s games. The table has been updated.