Sure, the college football playoff selection committee could change its mind at the last minute. Maybe it will decide Baylor deserves to rank ahead of TCU because Baylor won their head-to-head matchup. Maybe the committee will suddenly develop a fondness for Florida State, a team it has liked less than voters in the Coaches and AP polls.

But hoping for a shift in attitude is reminiscent of the line often said by losing political candidates: “The only poll that matters is on Election Day.” True, that’s when the votes are counted, but the pre-election polls predict the final tally pretty well. Voters usually don’t waver at the polling place.

Likewise, the voters on the committee are likely to remain steadfast. In fact, the rankings the committee published Tuesday night look like the work of a group that is doubling down rather than hedging its bets. TCU, which beat Texas badly last week, advanced to No. 3 in the rankings, overtaking Florida State, which won narrowly against Florida. That creates some further separation between TCU and No. 6 Baylor. And Florida State is now No. 4 despite being undefeated. The Seminoles will very probably make the playoff if they win the ACC championship game, but the committee seems to be making clear they won’t get in with a loss. 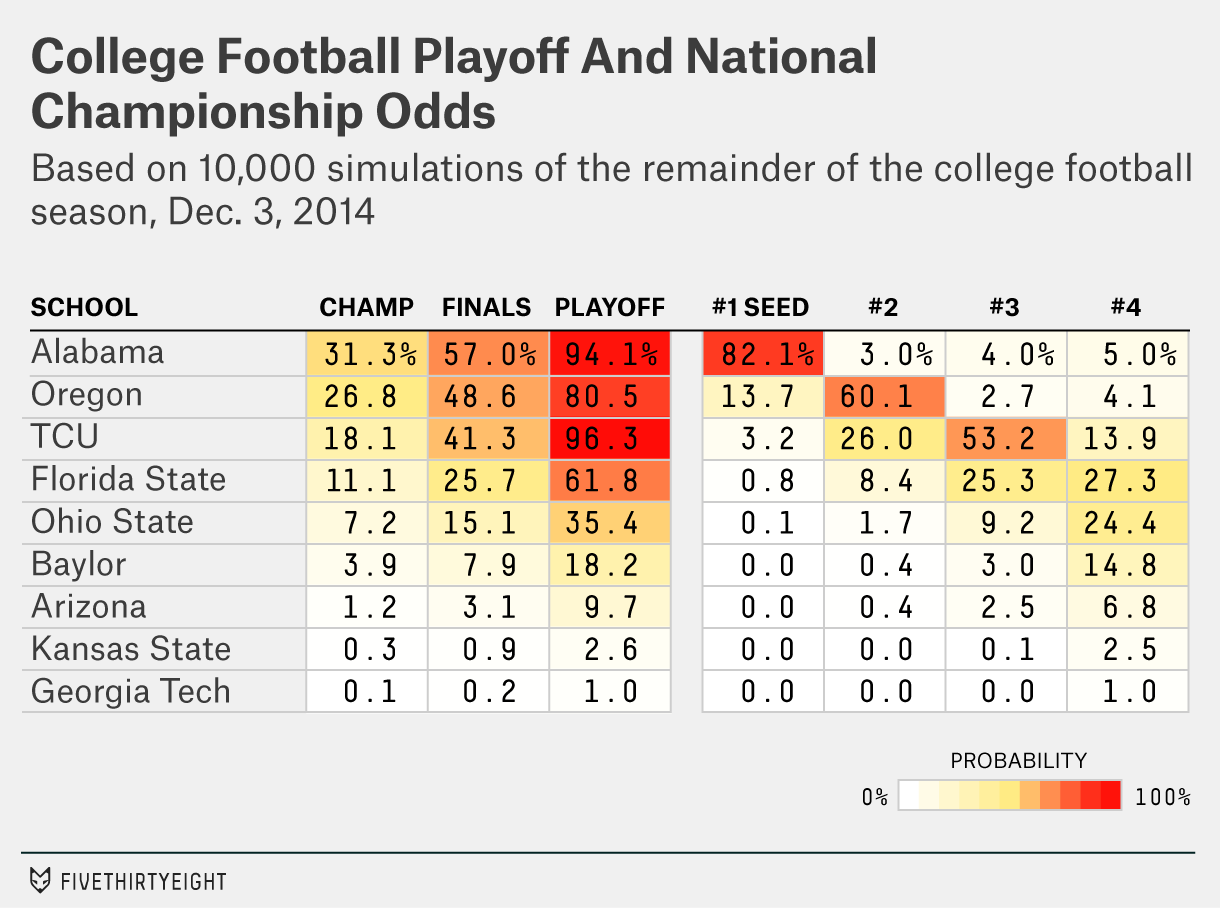 TCU’s chances of making the playoff are now 96 percent, according to the FiveThirtyEight model — up from 80 percent before the committee’s new rankings were released. Those odds might seem incredibly high, but TCU has a cupcake opponent in 2-9 Iowa State, against whom it’s a 97 percent favorite, according to ESPN’s Football Power Index (FPI). TCU remains unlikely to make the playoff should it lose, but it looks safer in the event of a win. That’s bad news for the teams ranking just behind it: Florida State, Ohio State and Baylor.

Arizona’s playoff chances were also helped slightly by the new rankings, rising to 10 percent from 7 percent. The committee slotted the Wildcats at No. 7 after their victory against Arizona State last week, ahead of Michigan State, which also won. Moving ahead of Michigan State is not important unto itself — MSU isn’t playing in the Big Ten championship game and is no real threat to make the playoff — but it’s a sign the committee likes Arizona enough that it could break into the top four if it defeats No. 2 Oregon for the Pac-12 title.

That leaves us with six games of consequence on the college football calendar this weekend: the four major conference championship games and the Big 12 regular-season games involving TCU and Baylor. These six games represent 64 possible permutations of winners and losers. But the simple version is this:

If you want the more complicated version, read along:

Alabama is heavily favored against Missouri, but things could get messy if it loses.

Historically in the Coaches Poll, No. 1 teams that lost their conference championships fell to either No. 3, 4 or 5. The FiveThirtyEight model agrees with that range; it has Alabama as most likely to fall to one of those spots in the committee’s rankings if it loses.

There’s a huge amount of practical difference between finishing at No. 3 and No. 5, of course, but it’s hard to be more precise than that. One problem is that we don’t know whether the committee sees Alabama as a clear No. 1 or just barely ahead of the other top teams. The other complication is that Alabama isn’t playing its game in a vacuum.

The dangerous case for Alabama is if it loses while the rest of the top five — Oregon, TCU, Florida State and Ohio State — win. That scenario would be a nightmare for the committee; it would either have to deny the SEC a slot in the playoff (Missouri and Mississippi State have almost no chance) or bypass a one-loss conference champion such as Ohio State for two-loss Alabama.

Could Alabama wind up behind Baylor, too? Possibly, but the model has Baylor as the team that could break Alabama’s fall in the standings instead. Whereas it gives Ohio State a 60 percent chance of being ranked higher should it win while Alabama loses, it has Baylor with just a 30 percent chance of doing the same.

Oregon will be an underdog to make the playoff it loses. One problem is that its opponent in the Pac-12 championship game, Arizona, could jump ahead of it. The model has Arizona with a 65 percent chance of ranking ahead of Oregon should it beat it in Santa Clara, California. That seems conservative; the model makes no special consideration for head-to-head play whereas the committee might, and Arizona would then have two head-to-head wins against Oregon (the Wildcats beat the Ducks in the regular season).

Still, the Pac-12 championship is not quite a winner-take-all game. The committee could have some rationale for preferring Oregon to Arizona even if Oregon loses; Arizona played a poor nonconference schedule, and it has a middling rating, according to FPI and other systems. There’s also the chance the committee won’t admit a Pac-12 team.

These next two cases are the simplest. TCU is very probably in with a win — even if all the other top teams win. It’s very likely out with a loss. Everyone else will be hoping for TCU to lose because it would be a clean knockout. Unlike Alabama, TCU would be little threat to remain in the top four with a loss. Unlike Oregon, a loss wouldn’t invite another team like Arizona into the playoff conversation. Unfortunately for those other playoff suitors, TCU is a 33-point favorite in Vegas.

This is an even clearer win-and-you’re-in, lose-and-go-home case. The model has Florida State as 94 percent likely to make the playoff with a win but gives it just a 3 percent chance with a loss.

You could debate either of those numbers, I suppose, but I don’t know that you’d get very far. Florida State has twice been overtaken in the playoff committee standings despite winning; is it possible that the committee could do that to the Seminoles again? Probably not; those previous demotions came after wins against middling opponents; Georgia Tech is a wholly respectable one. And the model isn’t considering the political consequences to the committee of leaving an undefeated defending national champion out of the playoff.

First things first. The Buckeyes need to beat Wisconsin. What then? As I’ve mentioned, the top four are in a reasonably safe position with a win. That necessarily implies the No. 5 team — Ohio State — needs someone ahead of it to lose to have much of a shot. If Ohio State wins but so does everyone ahead of it, its chances of making the playoff are just 16 percent. If it wins and someone ahead of it loses, those chances jump to 86 percent. Ohio State was hurt slightly by TCU pulling ahead of Florida State; TCU, playing a soft opponent, would have been an easier team to overtake for the No. 4 position.

The model is bearish on the Bears’ chances; it has them favored to make the playoff only if they win and at least two teams ranked ahead of them lose. Conference balance could also work against Baylor. If TCU gets in, the Big 12 will already have a representative in the playoff, and that could encourage the committee to prefer Ohio State or Arizona (or Alabama should it lose to Missouri) ahead of the Bears.

Arizona has come a long way. Its chances of making the playoff were just 0.4 percent two weeks ago. It has since secured big wins against Utah and Arizona State, while getting some help elsewhere (UCLA’s loss to Stanford) to get into the Pac-12 championship game.

The Wildcats will still need to bypass three teams to get in, but they have the advantage of playing one of them. Arizona is more likely than not to overtake Oregon in the standings should the Wildcats beat the Ducks.

No team below Arizona has more than a 3 percent chance of making the playoff. Kansas State is the team with the 3 percent chance after its ranking improved from No. 12 to No. 9. An even longer shot is Georgia Tech, which climbed from No. 16 to No. 11 and has a 1 percent chance. That’s not good, but it’s better than No. 13 Wisconsin or No. 16 Missouri, both of whom are also playing for their conference championships.

We’ll conclude with the model’s probabilistic take on how the top 25 might look Sunday: 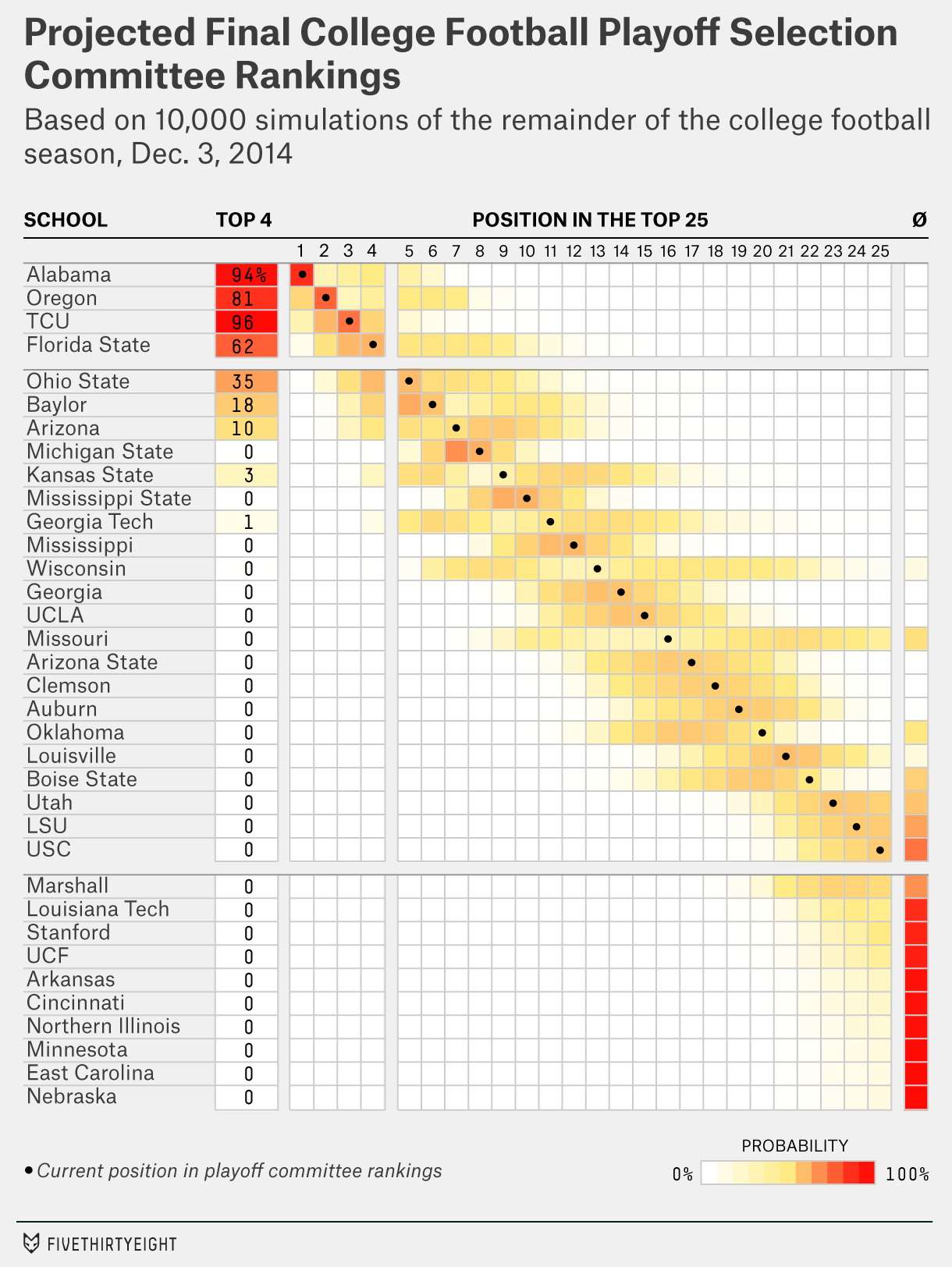 It’s fun to contemplate how things might change if there were eight teams in the playoff instead of four. Michigan State and Mississippi State would still be alive, and Wisconsin, Georgia Tech and Kansas State would have a lot left to play for.