The college football playoff picture would have become much blurrier had Auburn held on to defeat No. 1 Alabama on Saturday. Instead, the Crimson Tide prevailed 55-44. There were some losses to teams ranking behind Alabama — No. 4 Mississippi State, No. 8 UCLA and No. 9 Georgia were all beaten — but they tended to clarify how the teams will line up heading into conference championship weekend. Here’s how FiveThirtyEight’s college football forecast model expects the playoff committee’s rankings might look when they come out on Tuesday evening: 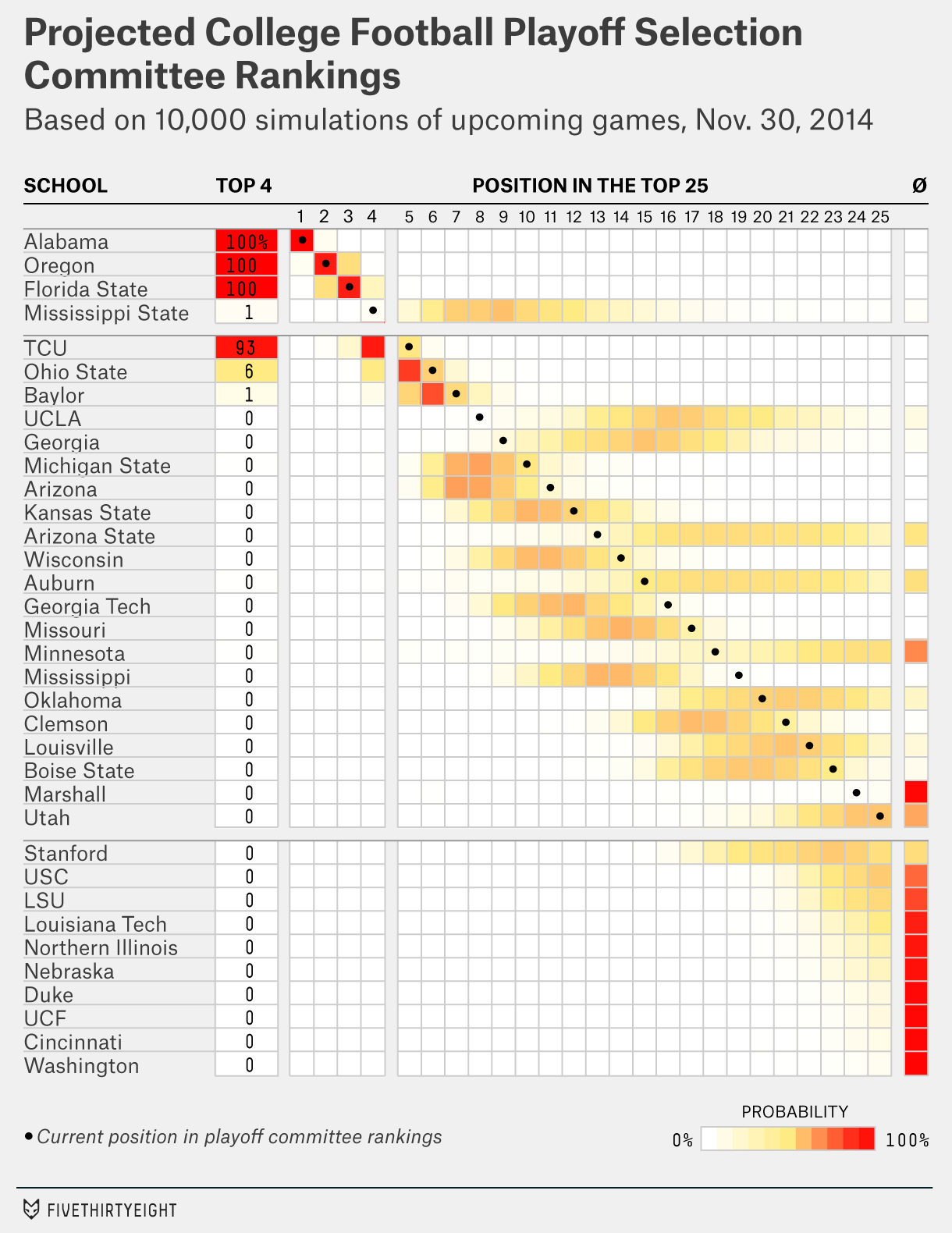 The top four seem reasonably clear. Alabama, Oregon and Florida State are likely to remain No. 1 through No. 3 in that order. TCU, No. 5 entering the week, will probably be promoted to No. 4 after demolishing Texas 48-10.

Ohio State, No. 6 last week, might give the committee more to think about. Buckeye quarterback J.T. Barrett was injured (and knocked out for the season) late in a win against Michigan. The committee has said it will consider “key injuries that … likely will affect [a team’s] postseason performance.” (The FiveThirtyEight model does not make any assumptions about injuries and so it might overrate Ohio State’s chances of making the playoff.)

But the team ranking just behind Ohio State, Baylor, turned in one of the less impressive performances of the week, prevailing over Texas Tech by just 2 points, 48-46. Texas Tech, 4-8 on the season, could have tied the game and probably sent it into overtime with a successful two-point conversion.

Michigan State and Arizona, No. 10 and No. 11 entering the weekend, are almost certain to move up in the rankings given the losses ahead of them. But only Arizona has realistic playoff hopes; the Wildcats will face Oregon for the Pac-12 championship after having beaten Arizona State. How far they move up on Tuesday should tell us something about how seriously the committee takes them.

Here’s how the FiveThirtyEight model projects the committee’s final rankings on Dec. 7, which will determine the four teams that make the playoff: 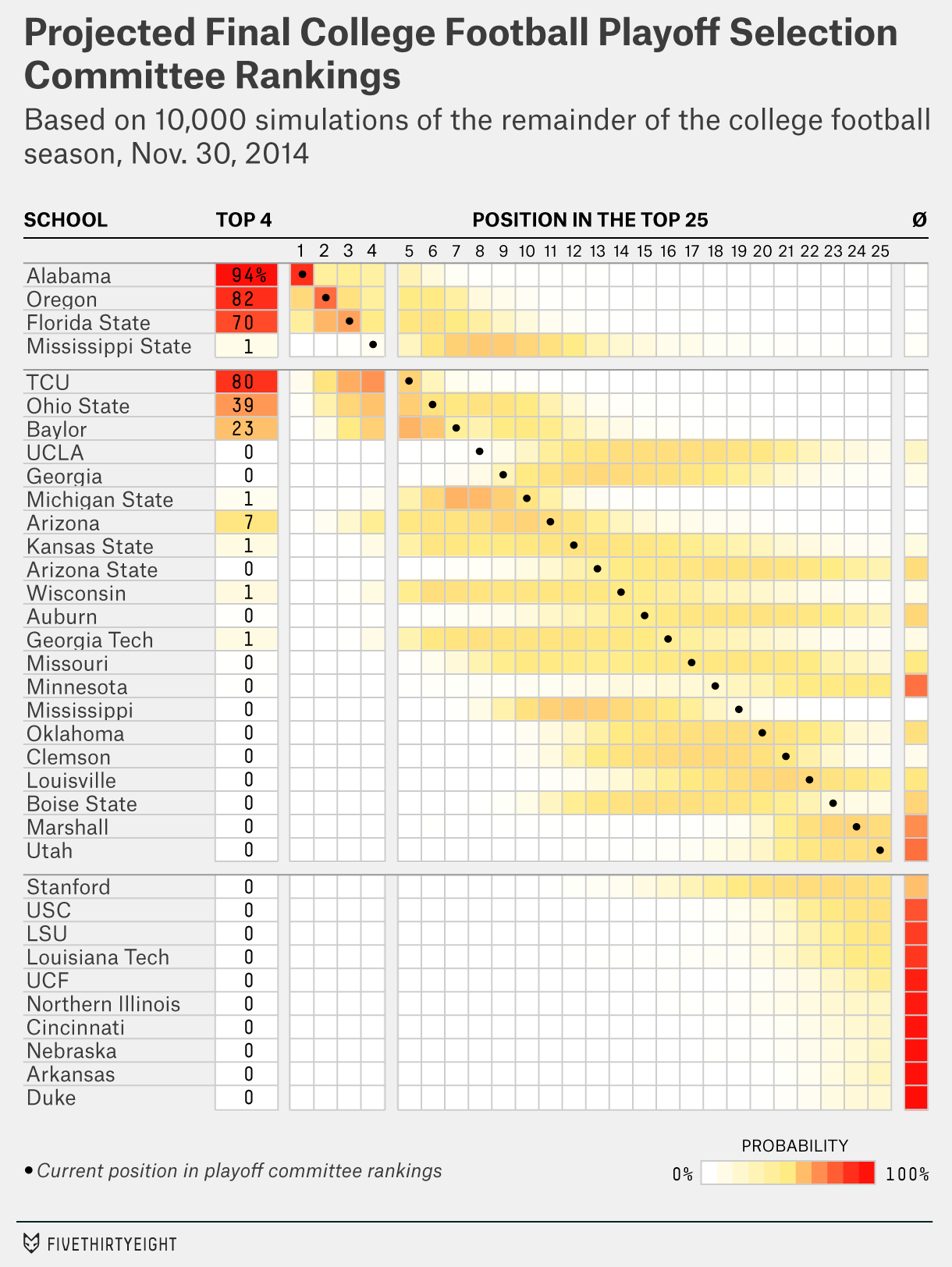 Even with just one one week to play, the scenarios are reasonably complex. So let’s briefly discuss the playoff from the perspective of the seven teams that are most likely to make it:

Alabama (94 percent chance of making playoff). Are the Crimson Tide guaranteed to be in? Not quite. But in addition to catching a few breaks against Auburn, Alabama also benefitted from Missouri winning and advancing to face them in next week’s SEC Championship game. At least according to the computer rankings, Missouri is a weaker opponent than Georgia would have been. And Missouri (No. 17 heading into the weekend) is probably coming from too far behind to leap Alabama in committee standings even with a win in Atlanta. In fact, the model gives Alabama a 67 percent chance of making the playoff even with an SEC Championship loss.

TCU (80 percent chance). Although TCU will likely remain behind Florida State in Tuesday’s rankings, the model has them as a safer bet to make the playoff. That’s mainly because TCU’s upcoming matchup is easier. TCU will play a previously-scheduled game against a middling Iowa State team next week (the Big 12 does not host a championship game). Florida State will face a more difficult opponent, Georgia Tech, in the ACC Championship.

TCU’s case may be more complicated than the model implies, however, because it lost earlier in the season to Big 12 rival Baylor. But last week’s performance may give the committee a good excuse to ignore the head-to-head result and instead look to factors like results against common opponents like Texas Tech. While Baylor only narrowly escaped Texas Tech, TCU had beaten them 82-27 on Oct. 25.

Florida State (70 percent chance). The undefeated Seminoles helped their cause with a win against Florida. But they’re only 65 percent favorites to beat Georgia Tech in the ACC Championship. If the Seminoles lose, they’ll have only a 15 percent chance of making the playoff, according to the model.

It didn’t help Florida State that the No. 5 through 7 teams (TCU, Ohio State and Baylor) all won last weekend. The committee isn’t especially fond of the Seminoles, and a loss in the ACC Championship could allow TCU, Ohio State or Baylor to leap frog them.

Ohio State (39 percent chance). The model gives Ohio State a 66 percent chance of making the playoff should it beat Wisconsin in the Big Ten championship (and almost no shot if it loses that game). That doesn’t account for the injury to Barrett — although if backup Cardale Jones is good enough to beat the Badgers, that arguably ought to resolve the committee’s questions. Still, this wasn’t a great weekend for Ohio State. In addition to Barrett’s injury, they would have benefited from more chaos ahead of them in the standings. The Buckeyes could beat Wisconsin and still be left out.

Baylor (23 percent chance). The Big 12 doesn’t play a championship game, but the Bears, will have the chance to impress the committee as they’ll face a challenging opponent in Kansas State next weekend. Still, it may be wishful thinking to expect Baylor to suddenly leap ahead of TCU or other teams in the rankings. The committee, to the extent it evaluates head-to-head performance, seems to have decided that Baylor’s win against TCU isn’t enough to outweigh what it sees as TCU’s better resume.

Arizona (7 percent chance). This sounds like a real long shot, but it’s partly because the model gives Arizona just a 26 percent chance of beating Oregon. Should they win that game, the Wildcats will have a 27 percent chance of making the playoff, according to the model. The Wildcats might need one or two of the teams ranked ahead of them to lose (in addition to Oregon) to feel great about their chances.

Overall, Alabama and TCU were helped the most by the past weekend’s action. Alabama’s chance of winning the national championship — not just making the playoff — is up from 26 percent last week to 32 percent. TCU’s chances improved from 9 percent to 15 percent. 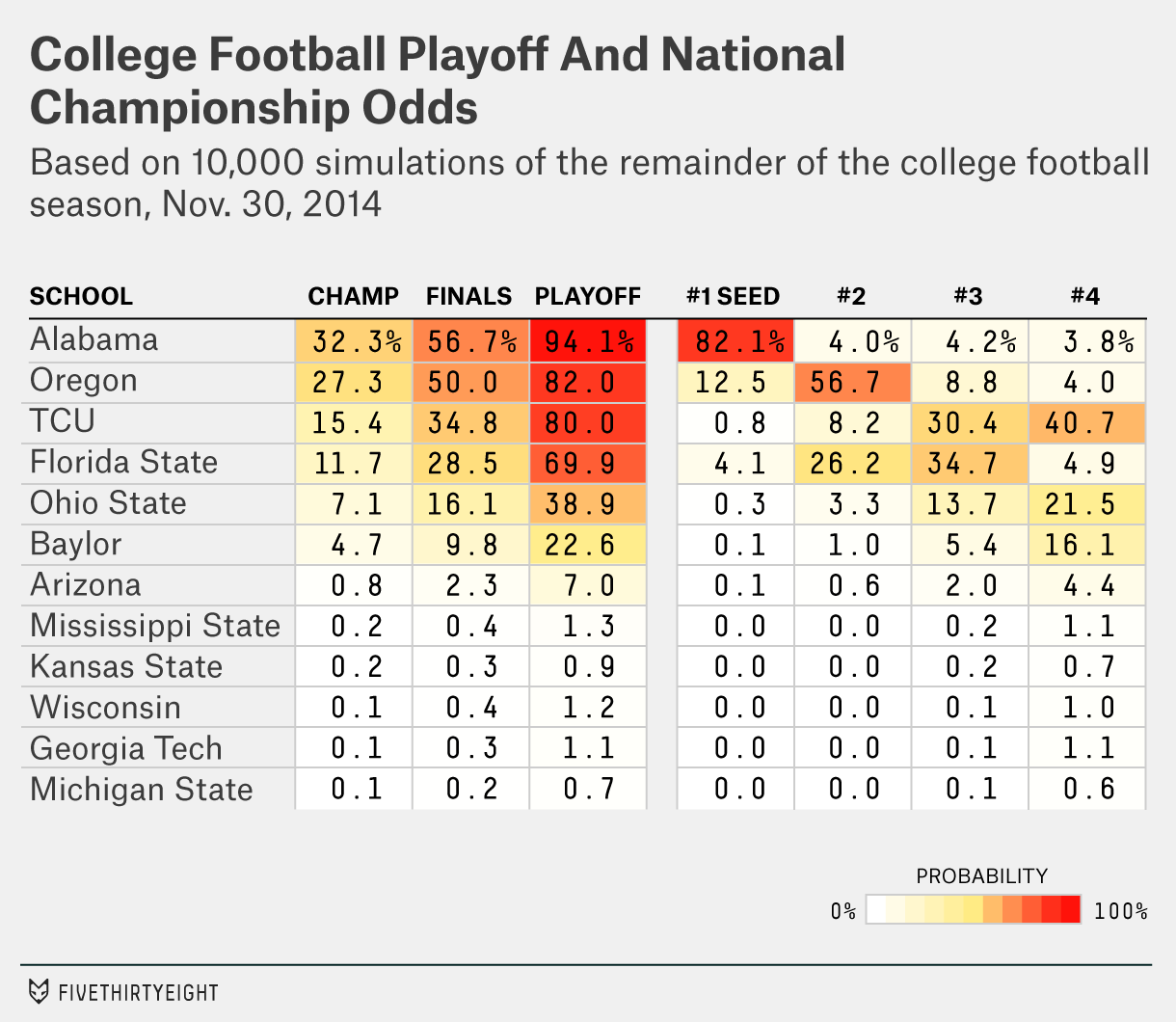