The Florida State Seminoles have not lost a football game in almost two years. After succumbing to Florida on Nov. 24, 2012, they recovered to win the ACC Championship Game and, on Jan. 1, 2013, the Orange Bowl. They went undefeated (14-0) in the 2013 season and won the national championship. And they’re 11-0 so far this year. That’s 27 wins in a row.

Might the Seminoles’ position even fall further when the new committee standings come out on Tuesday night? On Friday, we debuted a college football playoff forecast model that seeks to answer these questions. The good news for Florida State is that none of the teams ranked immediately behind it did anything terribly impressive either. No. 4 Mississippi State won 51-0, but did so against 3-8 Vanderbilt. Fifth-ranked TCU did not play. No. 6 Ohio State also played a 3-8 team, Indiana, winning 42-27 in a game that was close until the fourth quarter.

To find a school with a truly impressive win, you’ll need to scan down to No. 9 UCLA, which won easily against No. 19 USC, its crosstown rival. More about the Bruins in a moment. First, here’s the model’s probabilistic view of what the new committee standings might look like on Tuesday: 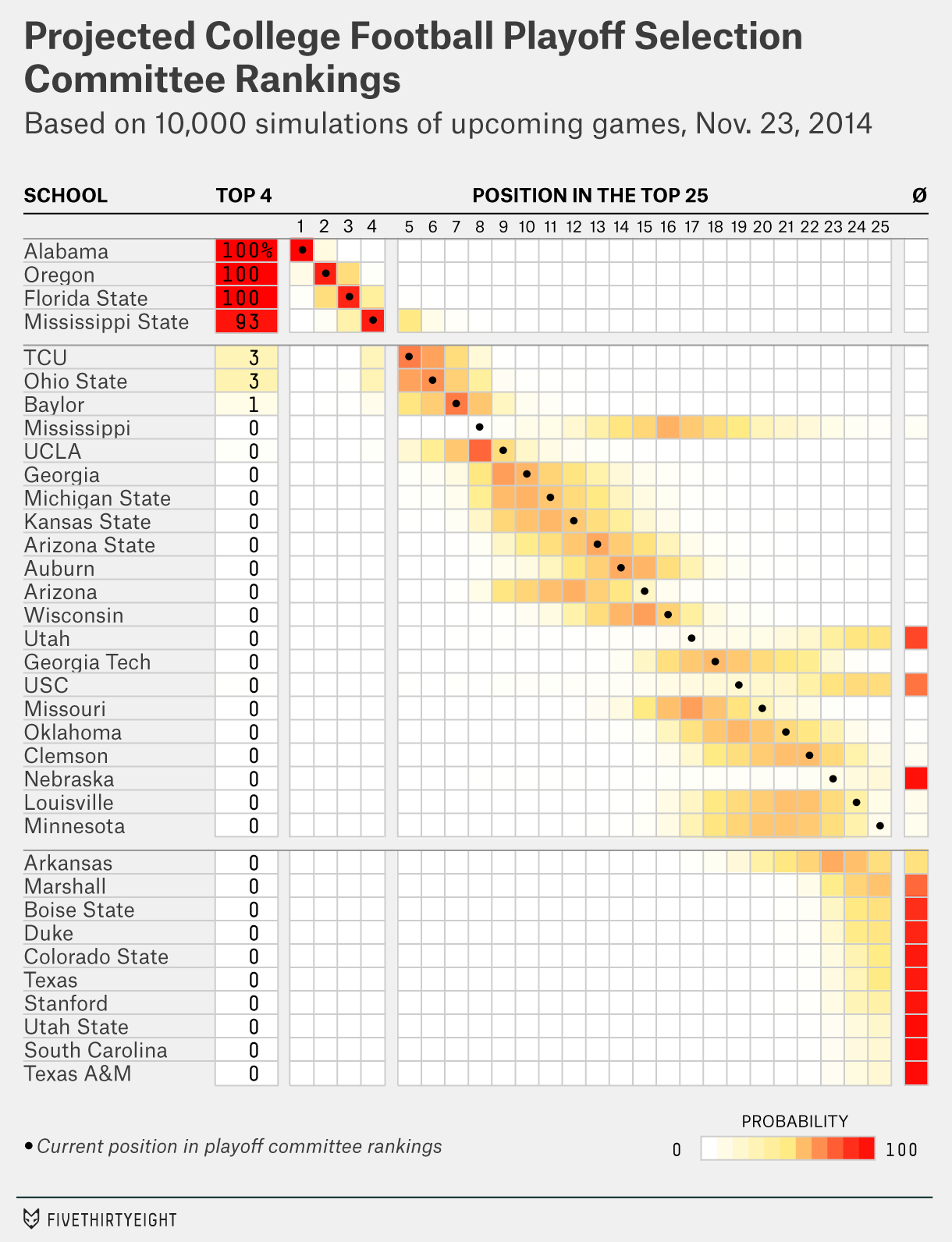 However, since the committee is new, the model is mostly based on an analysis of how games have historically changed the standings in the Coaches Poll. Perhaps the playoff committee will view things differently. When it comes to Florida State, it already has a significant difference of opinion with the Coaches Poll, which has the Seminoles at No. 1.

Florida State has won by narrower margins, and against a weaker schedule, than the other top teams this year. It’s hard to say which of those factors are producing the difference in the rankings. Perhaps the committee is looking at what it calls “game control” – a team’s ability to remain in a comfortable position from start to finish – and finding Florida State’s series of nail-biting wins faulty. Or perhaps, regardless of the scorelines, they don’t see enough big wins on Florida State’s resume. The Seminoles’ most impressive-seeming win of the season, against then 6-0 Notre Dame on Oct. 18, looks less so now that Notre Dame has lost four of its last five games.

There’s also the issue of how much the polls and the committee are weighing preseason expectations. Our research has uncovered evidence that where a team starts the year in the Coaches Poll affects where it finishes, even after accounting for its performance during the current football season. Florida State started as the preseason No. 1 in the Coaches Poll. The committee, however, did not release its first rankings until Oct. 28, halfway into the season, and had Florida State second.

If your goal is to forecast upcoming games, it’s not wrong — in fact, it’s helpful statistically — to consider results from previous seasons. College football teams play fewer games than those in any other major American sport. Looking at “old” data is better than not having enough data.

But if you want to determine who “deserves” a place in the playoff, it’s more complicated. It might be politically incorrect for the committee to consider last year’s performance in determining eligibility for this year’s playoff.

It’s going to take some time for us to make clear inferences about which factors the committee prioritizes. That’s why we’re treating this year as an experiment for the model rather than something you might bet a lot of money on.

However, if Florida State were to fall to No. 4 or lower this week, it would be a sign the committee places a lot of emphasis on margin of victory and game control. At the other logical extreme – if the committee didn’t consider margin of victory at all — Florida State would have a case for moving up in the standings, since its opponent on Saturday, Boston College, was the best of a very weak lot (Western Carolina, Colorado, Vanderbilt) faced by the other teams in the top four.

UCLA will be another interesting test case for the committee. The Bruins, No. 9 last week, will very likely move up at least one position. That’s because Mississippi, No. 8 last week, lost to Arkansas, taking its third loss and eliminating its hopes of title contention.

But could UCLA move up to No. 6 or No. 7 instead? Historically, voters in the Coaches Poll have not rewarded teams much for “big wins” (instead, they’ve tended to punish them for losses). The committee, so far, has been a little more aggressive about promoting teams after they secure major victories, sometimes jumping them ahead of other teams that also won. USC might or might not qualify as a “big win” for UCLA — the Bruins were favored and playing at home — but it’s impressive compared to the middling opponents the other top teams faced.

UCLA’s placement is relevant because it has a path, albeit a fraught one, into the playoff. The Bruins will need to beat Stanford on Friday and then Oregon in the Pac-12 title game on Dec. 5. If that happens, UCLA will presumably move ahead of Oregon in the committee’s pecking order. But even that will not be enough. Say that Alabama and Florida State also win out. UCLA might also need to jump ahead of potential conference champions like TCU, Baylor and Ohio State. Or imagine that Florida State loses. Would the committee take a two-loss UCLA team ahead of a one-loss Florida State team?

The next chart represents the model’s attempt to sort out all these possibilities and forecast how the standings might look on Dec. 7, when the committee will release its final rankings: 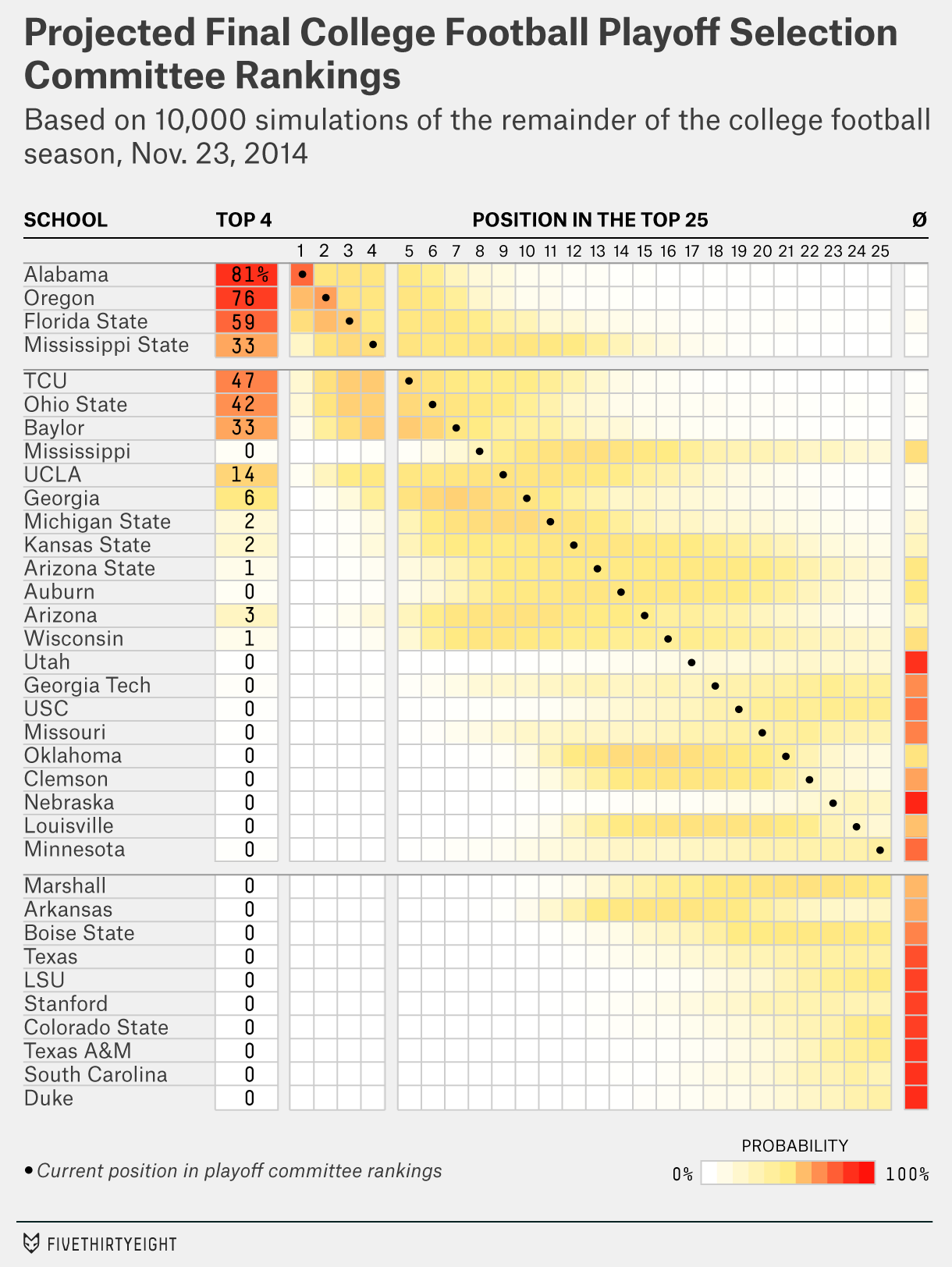 UCLA’s chances of making the playoff are 14 percent — up from 8 percent before its win against USC. That may undersell the Bruins’ chances, however. If they beat both Stanford and Oregon, their chances will be about 50 percent, according to the model.

What about Florida State? The model has the Seminoles’ chances at 59 percent overall, not much changed from 60 percent last week. But it gives them just an 18 percent chance of making the playoff if they take a loss rather than finishing the season undefeated.

We’ll rerun these numbers on Wednesday after the committee has released its new standings. Here’s how the national title odds look in the interim: 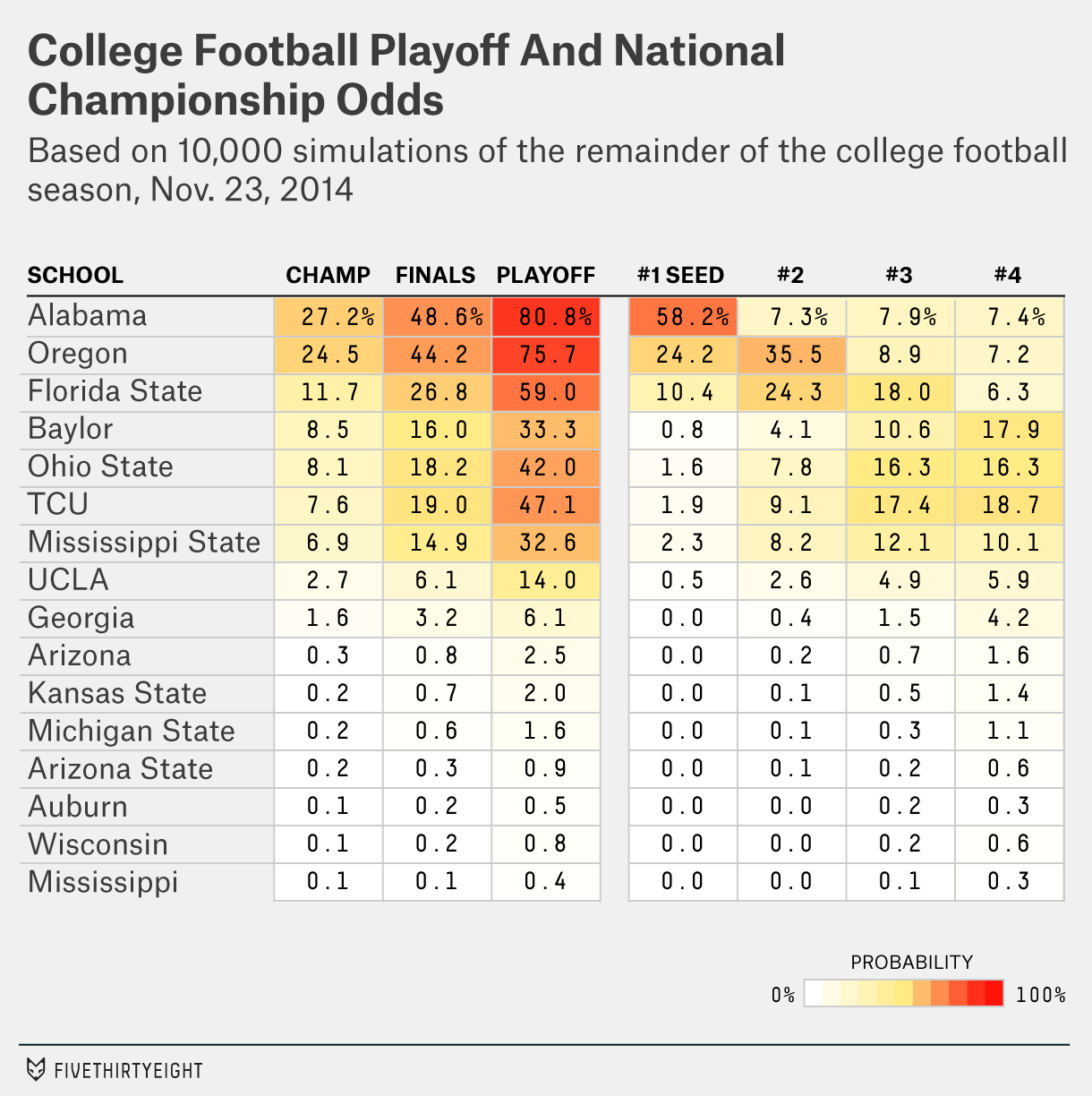 There’s not much change from last week, other than for UCLA and Mississippi. If you’re looking for a real dark horse, however, you might find one in the Arizona Wildcats. Like UCLA, they’re 9-2 and they also scored an impressive victory Saturday, demolishing No. 17 Utah 42-10 in Salt Lake City. To make the playoff, they’ll probably need to beat Arizona State on Friday and hope that UCLA loses to Stanford (UCLA beat Arizona on Nov. 1 and so holds the tiebreaker against them if the teams finish with the same Pac-12 record). Then, Arizona would make the Pac-12 title game and have to beat Oregon. The Wildcats would probably also need other teams like Ohio State or Florida State to lose. This parlay is not at all likely — the model puts the chances at about 3 percent — but Arizona isn’t drawing totally dead.

True college football geeks might also pay attention to what the committee does at the bottom end of its new top 25. With No. 17 Utah, No. 19 USC and No. 23 Nebraska all losing on Saturday, a couple of new positions should open up.

The teams that enter the standings will have zero chance of making the playoff. But they may reveal something about the committee’s philosophy. What if Arkansas pops into the standings, for instance? The Razorbacks are just 6-5, but they’ve played the second-toughest schedule in the country according to Jeff Sagarin’s ratings, and they’re coming off shutout wins against LSU and Mississippi. If they enter the rankings, it would be a sign the committee is sympathetic to teams that play tough schedules. If a team like Marshall enters instead — it’s 11-0 but against a pathetic schedule — the committee would be giving a different signal.