Which teams are most likely to make college football’s first-ever four-team playoff? And which have the best chance of coming away with the national title?

The quick answer is the obvious one: The Alabama Crimson Tide lead the way on both counts. They’re No. 1 in the playoff selection committee’s current rankings and No. 1 according to most computer systems, including ESPN’s Football Power Index (FPI). Alabama is no stranger to postseason success, having won the national title in 2009, 2011 and 2012.

But it won’t be easy for Alabama, or anyone else. To win the national title, the Crimson Tide may need to prevail in four very challenging football games — against arch-rival Auburn on Nov. 29, in the SEC Championship on Dec. 6, and then in the national semifinal and championship games. Alabama is more likely than any other team to win the title, but its chances are still only about 28 percent.

That number comes from a new model we’ve developed that simulates the rest of the college football season and considers how subsequent games might affect the playoff committee’s rankings. The model is speculative: Statistical models are grounded in history and there’s zero history to go by when it comes to the college football playoff. But we hope to have some fun with it over the next few weeks and use this season as a guide for how to improve it in future years.

The key characteristics of the model are that it’s iterative and probabilistic.1 By iterative, I mean that it simulates the rest of the college season one game and one week at a time instead of jumping directly from the current playoff committee standings to national championship chances. By probabilistic, I mean that it hopes to account for the considerable uncertainty in the playoff picture, both in terms of how the games will turn out and in how the humans on the selection committee might react to them.

Games are simulated using ESPN’s Football Power Index. To take one example, FPI has USC with about a 40 percent chance of upsetting UCLA in the game they’ll play Saturday in Pasadena, California.

The next question is how the teams’ standings in the playoff rankings might change given the possible outcomes on the field. We’ve principally used the historic record of the Coaches Poll for guidance. The simulations account for the fact that some wins and losses matter more than others.

Let’s say that USC wins. It’s currently ranked No. 19 in the playoff committee’s rankings. On average in the Coaches Poll, teams ranked in that position have moved up to only No. 17 or No. 16 after a win.

Our model sees more upside potential for USC, however. A victory for the Trojans would come in what is technically a road game for them (a few freeways away from their campus in Los Angeles). More importantly, it would come against a higher-ranked opponent in UCLA. Historically — and quite reasonably — human raters have given more credit to wins like those, so our simulation would have USC moving up to No. 15 or No. 14 on average if it wins instead. But there’s considerable uncertainty in the outcome. We have USC moving as high as No. 10, or even into the high single digits, in some simulations; in other cases, a number of other teams ranked near it in the standings might have impressive wins also, and USC would barely move up at all.

The simulations also account for the potential margin of victory in each game. Voters in the coaches and media polls have mostly looked at wins and losses, but our research suggests they give a little bit more credit to especially lopsided victories or especially close ones.

USC, although an interesting case for the model, is almost no threat to win the national championship no matter the scoreline in Pasadena. Even if it beats UCLA this week and Notre Dame next week — and wins the tiebreaker for the Pac-12 title and then wins that game against Oregon as well, it will be coming from too far behind. Our simulation gives the Trojans only a 0.2 percent chance of making the playoff.

Other teams have a more credible chance of contending. Take Mississippi State. On the positive side for the Bulldogs, four teams will get into the playoff and they’re currently ranked No. 4. But Mississippi State has more downside than upside scenarios. It will almost certainly be out if it loses against No. 8 Mississippi — a game in which FPI has the Rebels favored. And even if Mississippi State wins that game, it won’t advance to the SEC Championship unless Alabama loses to Auburn. If Alabama wins, the Bulldogs would be denied another chance to impress the committee. Thus, our simulation has Mississippi State with just a 27 percent chance of making the playoff.

These permutations can get complicated, which is why it helps to take things one week at a time. What might the playoff committee standings look like after this Saturday’s games, for instance? The heat map you see below reflects our model’s effort to account for all the possibilities: 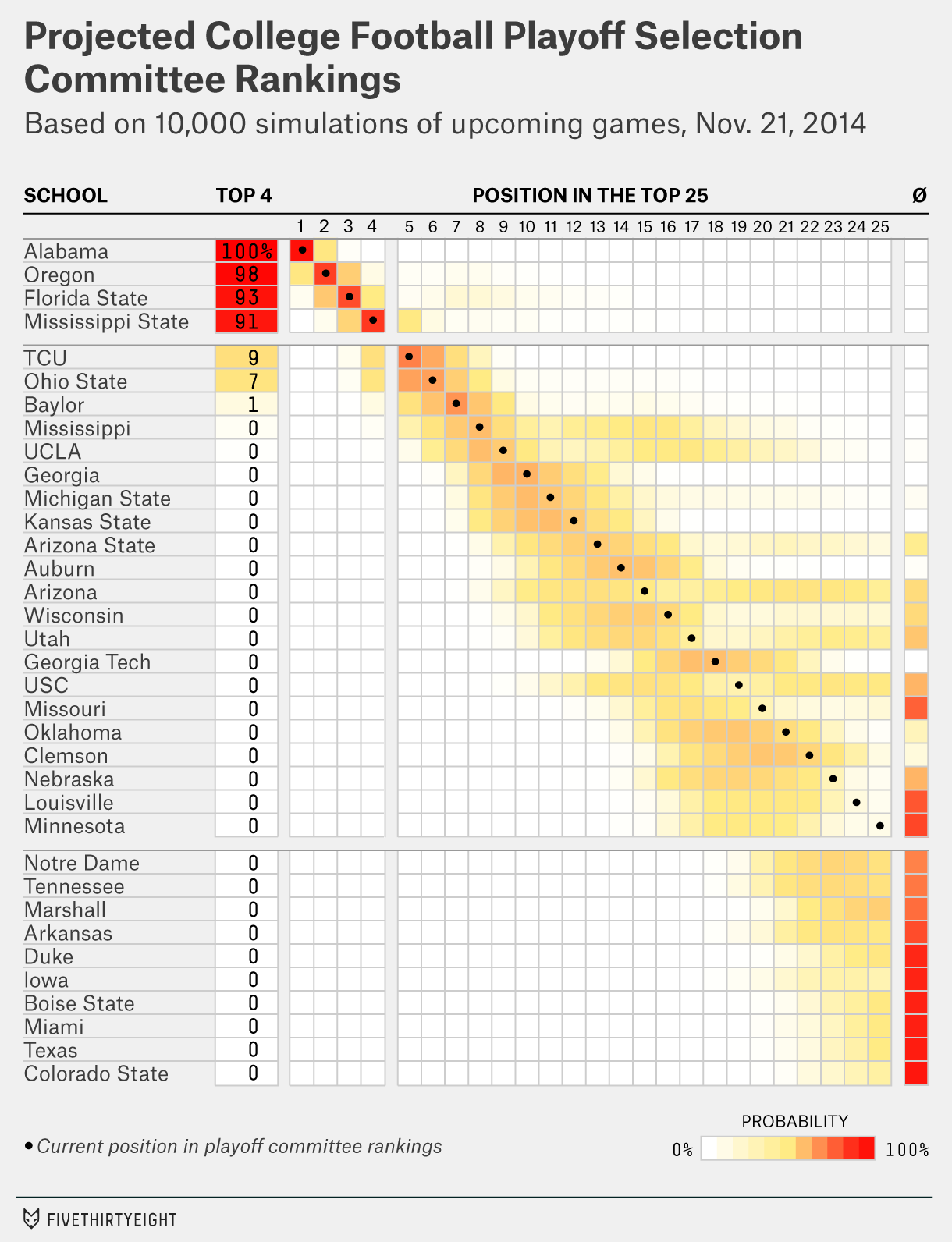 The top four probably won’t look much different when the playoff committee releases its new standings on Tuesday. They all have fairly easy marks: Alabama will play a Division I-AA opponent, Western Carolina. No. 2 Oregon is at home against 2-8 Colorado. No. 3 Florida State is heavily favored at home against Boston College. And Mississippi State is also at home, playing Vanderbilt, the worst team in the SEC.

There’s more action outside the top four. I already mentioned the high-leverage game in Pasadena. If you look carefully at the chart, you’ll see that USC’s probability distribution is bimodal. In other words, it probably won’t stay at No. 19, where it is now. If it beats UCLA, it could gain several positions in the rankings; if it loses, it will have taken its fourth loss and might be knocked out of the top 25 entirely.

USC’s opponent, UCLA, also has a lot on the line. UCLA would need a lot of help, but it still has an outside chance — our model puts it at 8 percent — of making the playoff. Beating both USC and Stanford would give UCLA an entry into the Pac-12 championship game. If it beat Oregon then, and a team or two ahead of it endures a loss, it could get in.

We might compare the Trojans against their Hellenic-themed rivals, the Michigan State Spartans. Not that MSU, already having lost twice, had much chance to begin with (it pains me to say that as an East Lansing High School alum). But the Spartans are a good example of a team that just doesn’t have enough opportunities to impress committee voters even under its best-case outcomes. MSU’s only remaining scheduled games are against unranked Rutgers and Penn State — and it will only make the Big Ten Championship game if it wins twice and Ohio State loses twice.

The Georgia Bulldogs, by comparison, despite being just one position ahead of Michigan State in the rankings, have a better hand to play. They’ll make the SEC Championship if Missouri loses either of its remaining games. If Georgia makes the conference title game and beats Alabama, it would give committee members a lot to think about.

Here’s how our model sees the potential lay of the land on Dec. 7, when the selection committee will release its final rankings: 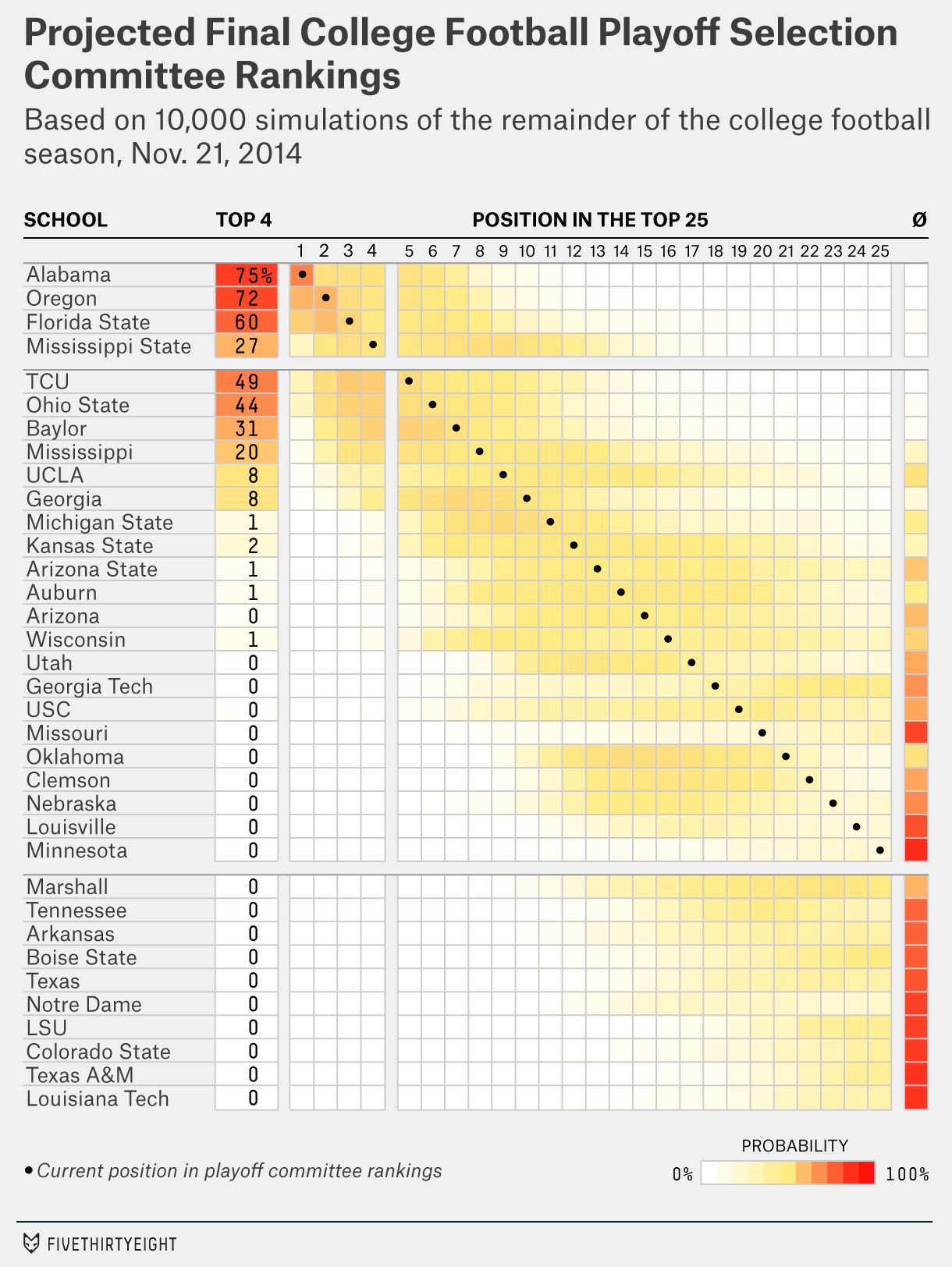 As you can see, playing out three weeks’ worth of games increases the uncertainty a great deal as compared to just this coming weekend’s outcomes. No team is more than 75 percent certain to make the playoff.

Florida State, despite being undefeated and No. 1 in the Coaches Poll, is not all that well positioned. The selection committee has it at No. 3, which implies that a loss would probably knock it out of contention. FPI, along with other computer systems, is not high on the Seminoles, who have won by middling margins against a so-so schedule.

Oregon’s position is better. The Ducks will probably have to win out also, but they’ve already survived the tougher parts of their schedule. Oregon has been good enough, in fact, to make duck-hunting an appealing proposition; UCLA’s outside shot of making the playoff relies upon the possibility of beating it in the Pac-12 Championship.

Our simulation also accounts for what might happen beyond Dec. 7. Here are the teams most likely to win the national championship, according to our model: 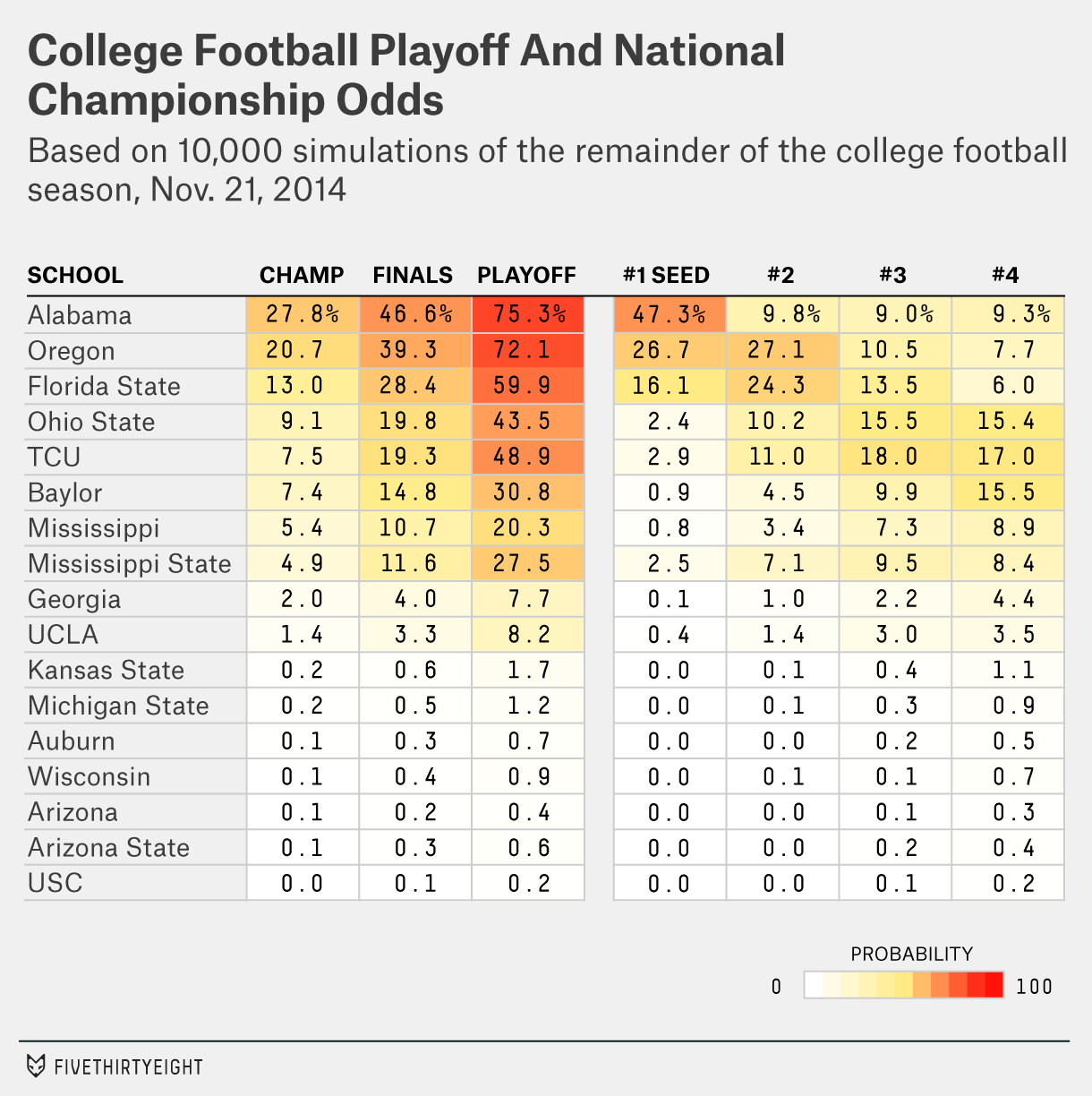 A few teams might be overlooked in the title hunt. Although none of its teams ranks in the top four now, the Big 12 is more likely than not to advance one team (TCU or Baylor) into the playoff. Ohio State’s position as a potential one-loss winner of a major conference will start to look better if any teams ahead of it slip. Ole Miss is a longshot to make the playoff — it will have to beat Mississippi State and perhaps hope that Alabama loses also so that it can get into the SEC Championship — but it’s at the top of the pecking order as far as two-loss teams go.

There’s still a lot that these simulations aren’t accounting for. There’s no mechanism in the model to account for head-to-head results even though the committee has said it will consider them if the standings are otherwise close. That potentially works to the benefit of Alabama, which might finish close to Mississippi State in the standings if it loses to Auburn or in the SEC Championship, but which beat the Bulldogs in Tuscaloosa last week.

The selection committee may also place more emphasis on conference championships than the simulations do. But we have no evidence yet for how that might play out — nor for how resistant the committee might be to choosing two or more teams from the same conference. We hope you’ll join us as we sort through the scenarios.

CORRECTION (Nov. 22, 3:20 p.m.): An earlier version of this article misstated the division in which Western Carolina plays. It is not Division II, but the Football Championship Subdivision, formerly known as Division I-AA.