Even before they won their fifth Super Bowl together, Bill Belichick and Tom Brady were the twin pillars of the greatest dynasty in NFL history. Since Brady took over as a starter, the New England Patriots have had 16 straight winning seasons — including seven straight seasons with 12 or more wins — in an era where the salary cap has made staying on top nearly impossible. Belichick is a three-time AP coach of the year, and Brady is a two-time MVP. Both have secured their legacies, both are easily in the GOAT discussion for their respective roles.

But they can’t really both be the greatest, right?

The greatness of a quarterback is so hopelessly entangled with the greatness of his coach that measuring either of them separately is complicated. And when things get complicated, I revisit Occam’s razor: “Pluralitas non est ponenda sine necessitate,” goes the Latin. Plurality should not be posited without necessity. Or, all else being equal, the explanation that requires the fewest assumptions is most likely to be true. If you assume that Belichick is the greatest coach of all time, it’s highly plausible that Brady is only moderately great, and vice versa. Assuming that they are both the greatest of all time is unnecessary.

Perhaps we shouldn’t obsess about credit and just let both men enjoy their plaudits in peace. Or perhaps we should obsess over it, because that’s what we do.

The case for Bill Belichick (and against Tom Brady) 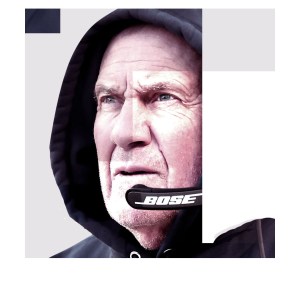 In 2000, the Patriots gave up first-, fourth- and seventh-round draft picks to the Jets in exchange for fifth- and seventh-round picks and the right to sign Bill Belichick. In Belichick’s second year as New England’s head coach, the team won the Super Bowl — against the Greatest Show On Turf, no less — with a second-year, sixth-round draft pick under center, and the Patriots haven’t looked back since. Their 14-year (and counting) streak of winning at least 10 games a season is the longest such streak in the salary-cap era — five years longer than Peyton Manning’s streak with the Colts.1 The next-longest active streak — five seasons — belongs to the Seattle Seahawks.

The Patriots have built successful seasons in a number of ways. Known today for their spread offenses and innovative use of tight ends, along with Brady’s gaudy touchdown totals, the Brady-Belichick Patriots had already won two Super Bowls before their offense cracked the top five in the league in 2004. While the team has averaged the highest number of points scored per drive in the NFL since 2001, it has also allowed the third-fewest points per drive in that time — behind only the notoriously defensive-minded Baltimore Ravens and Pittsburgh Steelers, who, like the Pats, have also won multiple Super Bowls this millennium.

While Brady has put up impressive numbers — especially since 2007 — he has played his entire career under one coach (unlike Peyton Manning and several other top QBs). And while Brady has been a stalwart at QB since Drew Bledsoe’s 2001 injury, the Patriots didn’t implode during the few times he was out of commission (unlike the 2011 Colts when Manning missed the season, or the Cowboys in 2015, when Tony Romo missed 12 games): In 2008, Brady went down to injury in Week 1, and the inexperienced Matt Cassel led the Patriots to victory in that game and went on to post a 10-5 record as a starter. The team’s 11-5 record without Brady was a decline from New England’s 16-0 record the year before, but it was better than the 10-6 record the team put together the following season, when Brady returned. In 2014, Brady was pulled from a loss to the Kansas City Chiefs, and his backup, Jimmy Garoppolo, played well during his time on clean-up duty, a headline-worthy accomplishment. Then this year, with Brady sitting out his four-game Deflategate suspension, the Patriots went 3-1 with Garoppolo and Jacoby Brissett holding the reins. Garoppolo has even had the Patriots’ highest passer rating in two of the last three seasons, though his ratings have reflected a very small number of passes.

The Patriots’ ability to play well for years, to innovate, to excel in many diverse areas of the game (like defense and special teams), and to survive short-term calamity unscathed all surely point to their head coach as the protagonist in this show, right?

The case for Tom Brady (and against Bill Belichick) 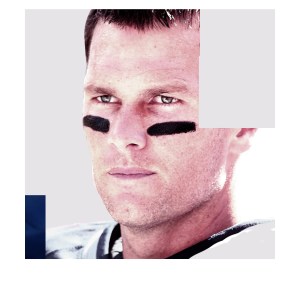 I’ll admit, the argument above — perhaps aided by a few flashy Belichick fourth-down calls — has long persuaded me. But for this article, I had to take a fair look at both sides.

We live in an era where previously unthinkable passing stats are the new normal, yet Brady’s portfolio still stands out as that of a deadly efficient — and, dare I say, even “clutch” — passer. For example, since 2001, he has won an absurd 33 percent (21 of 63) of regular-season and playoff games where his team has trailed by two or more scores in the second half. The next-highest win rate among QBs who have been in that spot at least 20 times goes to Andrew Luck, who won 26 percent (9 of 35) of those games.2 The rest of the league averaged 10 percent.

From the other direction, one of the reasons that Belichick is hailed as a genius is his no-nonsense support of win-maximizing strategy. But while Belichick may avoid a few of the biggest fourth-down errors, he still kicks on 4th-and-1 inside the 10-yard line 40 percent of the time (since 2001, compared to the league average of 41 percent), he has still never gone for 2 when down 4, 8, or 11, and he has even occasionally botched clock management like a mere mortal.

Should Terrell Owens Be In The Hall of Fame?

But perhaps most importantly, Belichick has a pre-Brady career for us to judge. It’s easy to feel like Belichick’s career started in earnest the year the Patriots first won the Super Bowl — when Brady took over as quarterback in 2001. But Belichick has had 22 seasons as a head coach, and his 11 winningest have all been with Brady under center. Likewise, his five losingest were all without Brady (four during his stint with the Cleveland Browns, plus one in New England with Drew Bledsoe). If Matt Cassel’s good year counts against Brady, then Belichick’s bad years should count in Brady’s favor.

So how do we assign each of them credit, fairly and objectively? By turning to statistical analysis, obviously.

To start with, I looked at each game in the salary-cap era (regular season and playoffs), and modeled which team should win based on who the starting quarterbacks were, generating an expected win percentage for each QB on a neutral field against a generic opponent. I then did the same, separately, for coaches.3 The top 10 salary-cap-era QBs and coaches by this metric are:

So far, everything makes sense, more or less. But while Brady and Belichick being at the top of their respective lists reflects what a dominant tandem they’ve been, it doesn’t help us figure out who was more valuable.

To get at that, I needed a model that could divide credit. So, instead of using two separate models for quarterbacks and coaches, I created one model that considers both. Same idea as before: The model takes each game in the salary-cap era, but this time it predicts the likely winner based on the two teams’ QBs and coaches.4 This produces each quarterback’s and coach’s estimated impact on his team’s likelihood of winning, which accounts for:

I don’t mean to suggest that the coefficients or rankings spit out by this model should be taken as definitive (either before or after divvying up credit), in part because, with highly correlated variables like these, changing the outcome of just a few games can lead to significant shifts in the distribution of credit and blame. But the model does measure the evidence, as it stands now, of who has benefited from — or been harmed by — their associates, based on wins, losses and who played with whom.

I used the combined model, which attempts to further separate the credit an individual deserves from the credit a duo deserves, to re-rank each of the QBs and coaches and then compared where each person ranked before and after dividing up the credit.5

For our purposes, it’s less important to look at the absolute credit each person receives than the direction that each person’s ranking goes in the absence of the other. That is, it’s not that the evidence says Peyton Manning was necessarily more important than Tony Dungy, it’s that there’s more evidence for Manning being as good as he seemed to be than there is for Dungy.

Prior to adjusting for the other generals on the field, Brady and Belichick both ranked No. 1 for their roles since 1994. In the combined rankings, Brady stays No. 1 among quarterbacks, but Belichick drops dramatically down the ranks of head coaches. Again, this doesn’t mean Belichick is actually the 36th-best coach, it’s just that once we account for his QBs, his win-loss record alone doesn’t provide nearly as much evidence of his greatness. The regression is significantly more swayed by Belichick’s bad periods with Bledsoe and the Browns than it is by his good periods with Cassel and Garoppolo. At the very least, it strongly suggests that the Cassel/Garoppolo argument that has been a mainstay of intense Brady skepticism (like from this guy) isn’t entirely fair.

Of course, I can’t say for sure. There’s a lot more information that I haven’t accounted for here. Clearly, Brady has been a highly efficient and successful quarterback, and clearly his career has benefited from Belichick’s obsession with winning — not to mention his innovative scheming on offense and defense. But as I reflect on my own past analysis, I notice that I’ve written many times about who might be responsible for Brady’s success — whether it be Belichick, Randy Moss, Rob Gronkowski or even Stephen Gostkowski — when perhaps I should have been focusing on the answer that requires the fewest assumptions. Pluralitas non est ponenda sine necessitate, Ben. Maybe the best explanation for Brady’s success is Brady.