Over time, athletes get stronger and faster, come from a broader talent pool, are better trained, and benefit from ever-growing institutional knowledge of their chosen art. This is most readily apparent with such individual skills as swimming, running and jumping — or kicking a football.

One of the biggest stories of the 2016 NFL wild-card round is how the Minnesota Vikings almost toppled the two-time defending NFC champion Seattle Seahawks, only to see their hopes dashed when kicker Blair Walsh shanked an easy 27-yard field-goal attempt that would have given the Vikings the lead with 22 seconds left in the game. The aftermath was dramatic, and once again, the NFL kicking game was thrust into the spotlight for pretty much the only reason it ever is: A kicker screwed up. Perhaps lost in the hubbub is that this was the only field goal missed all weekend.1 Such is the plight of the NFL kicker: They do their jobs remarkably well week in and week out, but get attention for it only when something goes horribly wrong.

But not at FiveThirtyEight! We will acknowledge greatness in its many forms.

Last year around this time, we published “Kickers Are Forever,” my ode to NFL kickers and the eerily steady progress they have made over the past 80-plus years. In that article, I showed how the kicking improvement has been reliable and has changed things like the fourth-down math. In the offseason, the NFL decided to make kickers’ jobs harder by moving the extra point back from the 2-yard line to the 15-yard line.

Predictably, this led to some missed extra points. This combined with a down week or two early in the season, and the notion started to emerge that kickers were having a bad year, sucking in some prominent commentators. We debunked the idea of a “Kick-pocalypse” at the time, but given my interest in everything kickers, I’ve once again taken a dive into the numbers to see if the kicking train has actually been in reverse, or stopped, or even slowed.

Spoiler: It has not. Indeed, not only was field-goal kicking in the 2015 regular season almost exactly as good as we said it would be, but kickers were the best they’ve ever been at kicking off and punting — with dramatic effects on the game.2 I’ve also identified the best players at the different aspects of the kicking game, and I have some awards to hand out to the best of the best.

Yes, field-goal kickers missed 71 extra points this season, after missing only eight last season. This 94.2 percent is the lowest since 1979. No, this is in no way bad or unexpected. Historically, it is quite high for 33-yard attempts — though for kicking, “historical” is not always a good frame for comparison. So to be clear, it is perfectly in line with projections for 2015 kickers.

Kickers also made 84.5 percent of their non-extra-point kick attempts — essentially tied for the second-best all time.3 This, despite the fact that they attempted longer kicks than ever. Here’s a plot of field-goal percentage vs. attempt distance over the past 14 seasons:

The average attempt distance has seen a steady increase, which might logically result in a decrease in efficiency, but the continued improvement of kickers has outpaced the increase in distance.

This includes them making 65 percent of their kicks from 50+ yards — second only to the 2013 kickers — despite taking a record 160 such attempts. Here’s how they performed over each distance category: 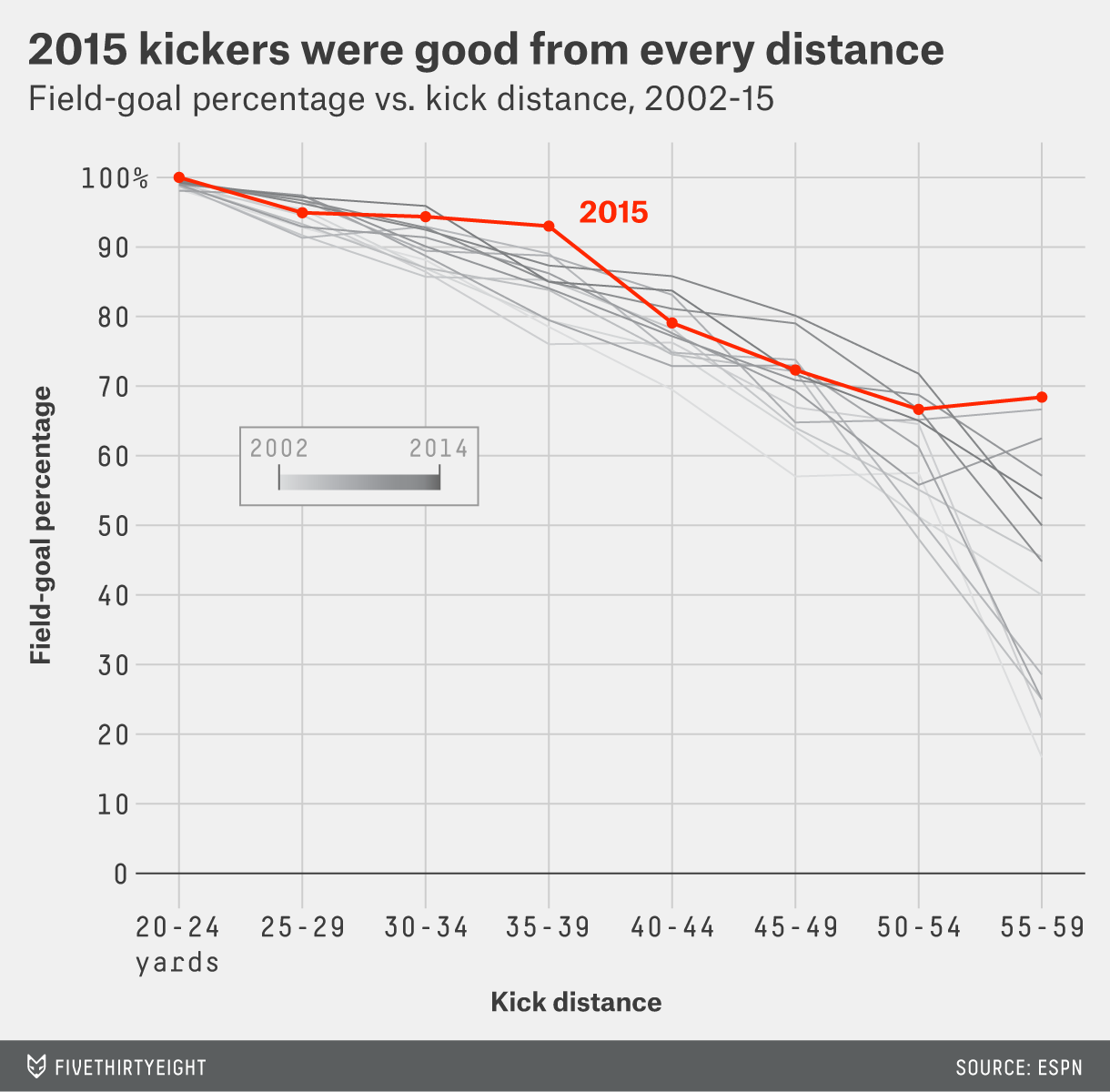 The 2015 kickers struggled a little bit from middle distances of 40 to 50 yards. And by “struggled,” I mean they had top-five all-time seasons but didn’t set records.

To better compare seasons, I’ve created an adjusted field-goal percentage that accounts for the distances of each kick and gives us that season’s expected make percentage for a baseline kick from the 30-yard line (about a 48-yard attempt):4

By this metric, kickers had their second-best season of all time (trailing only their miraculous 2013 campaign) and were within a fraction of a percentage point of their projections — well within the margin of error.

The worst kicker was Tampa Bay rookie Kyle Brindza, who missed six of 12 field-goal attempts and two of eight extra points before being cut in October. He ran 12.0 points below expectation on just 20 kicks overall.

Touchbacks are the new black

Another area where kickers can provide significant value, and where we also see creepily constant improvement, is in kickoffs. Of course, kickoff results depend somewhat on special teams kick coverage (though hang time and location matter as well), but one mostly objective metric we can track is frequency of touchbacks (note that the large shift from 2010 to 2011 is a result of the NFL moving the kickoff spot up to the 35):

The rate of touchbacks has been increasing pretty steadily, both before and after the rule change, reaching an all-time high of 57.4 percent in 2015 (not counting onside kick attempts). The average starting field position has clearly flattened, as we would expect, though 2015 still set a record: The average opponent starting position was 21.7 yards from the team’s own end zone, beating last season’s previous best of 22.0.

Still, those couple of yards here and there on kickoffs add up. For example, the Colts��� Pat McAfee (aka “The Boomstick”) had touchbacks on 67 of 74 (non-onside kick) kickoffs (91 percent). That’s close to 25 more touchbacks than we would expect from an average kicker. As a rule of thumb, a typical touchback is worth about 4 yards,5 meaning McAfee’s touchbacks alone were likely worth in the neighborhood of 100 yards, or the equivalent of 6 to 8 points over the season. That may not sound like much, but any player (especially a non-QB) who can get his team half a point or so above average per game is doing great.

To get a clearer picture of which kickers are most valuable, we can compare each kickoff to league expectation to find total yards saved and then convert those yards saved to point equivalents.6 (The full results are in the table below.) If you combine kickoff value with field-goal value, Gostkowski’s lead as place-kicking champion widens: Add in the 11.6 points the Patriots earned on kickoffs (not counting onside attempts, which would help Gostkowski even more as the Patriots recovered both of their attempts this season), and Gostkowski earned 23.8 points for them above expectation. Second place is Buffalo kickoff specialist Jordan Gay with 10.8 points above expectation (all from kickoffs).

Don’t look now, but punters are also changing the game

Finally, let’s turn to the most reviled of all football plays: the punt. Why teams voluntarily give up possession all the time instead of fighting tooth and nail to keep the ball — particularly with good field position — is an ongoing mystery. But they are getting better at it. Indeed, in recent years, the improvement in punting is perhaps even more marked and consistent than it has been with kicking.7 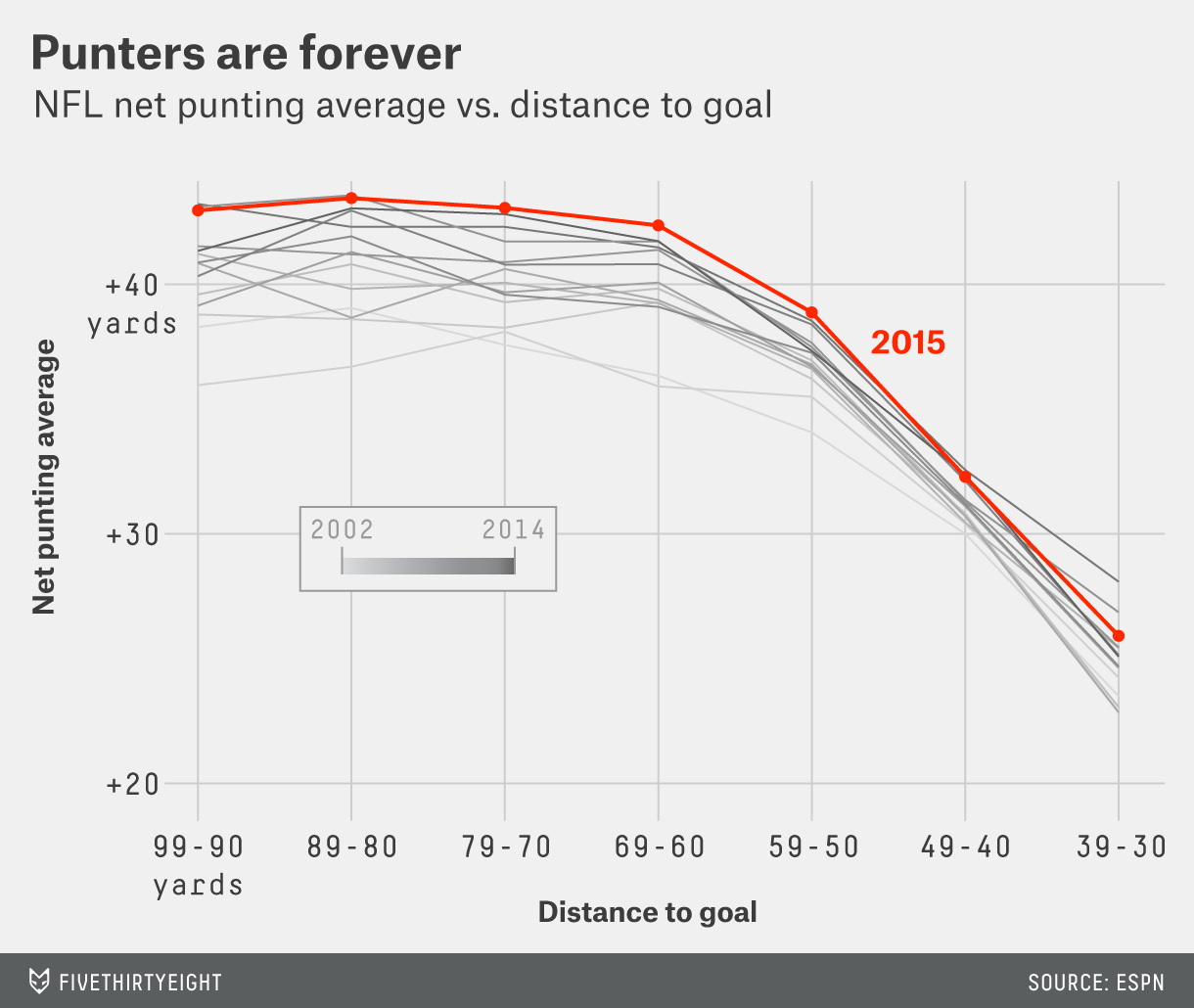 The differences here are pretty depressingly drastic for punt haters. In the 2002 and 2003 seasons, the average punt from 60 to 90 yards out (the part of the field where end zone locations don’t come into play) netted 37.3 yards, while in the 2014 and 2015 seasons those punts netted an average of 42.7 yards. That’s a 5-plus-yard difference on every punt!

So perhaps punt coverage has gotten worse? Nope. If you look at raw punt distance, punts have gotten 4.7 yards longer on average (47.8 vs. 43.1). Although 2015 punters set records at virtually every distance, the absolute margins are smaller when you get closer to the goal. For kicks 30 to 60 yards from the end zone, the gain has been 2.4 yards — but those yards may mean more if they help trap an opponent in dangerous territory. (The value of a single yard only really spikes at both end zones and the outer reaches of field-goal range.)

Note that I have not fully modeled punting improvement’s impact on fourth-down decisions as I have with kicking8 — yet — but it’s bound to be significant. Factoring in 10 years of kicking improvement was enough to swing many borderline fourth-down decisions in favor of kicking. Of the 40 situations I looked at, 11 had differences of less than two-tenths of a point — which is probably about the amount that midfield punts have improved. If a fourth-down model doesn’t adequately account for these highly predictable improvements, it could be getting many “go or no” calls wrong.

The punting expectation curve is relatively easy to model with a polynomial linear regression, which means we can find the expected distance of each punt and then compare a punter’s results with that expectation.

The punter of the year isn’t even a close call. The 6-foot-5, 236-pound Johnny Hekker of the St. Louis Rams led the league with a 47.9-yard average punt and netted his team 271 yards relative to expectation in the process.

On the other end of the spectrum, the Jets’ Ryan Quigley averaged 43.8 yards per kick and lost his team 297 yards relative to expectation.

Football player of the year (who actually uses feet)

If we convert those punting yards into points as we did with kickoffs above, we can get down to business and calculate each kicker’s complete value added from kicks.

Note that some punters also kick off and some kickers kick off, but there are (presently) no kickers who also punt. So for this chart I’ve plotted value gained from kickoffs vs. value gained from punting and kicking combined. Bubble sizes correspond to the total value the player added or cost his team, in expected points:

In a big surprise to me — and a big loss for those of us who despise the punting game — punters and kickers seem to affect the game similarly. They each claim five of the 10 players with the highest value added this season,9 with punters taking four of the top five spots. Although most coaches are probably costing their teams points by punting too much instead of going for it, the ones with better punters are costing their teams less.

That doesn’t mean punters have quite caught up to their place-kicking counterparts, at least at the very top. Johnny Hekker — the league’s most valuable punter, as well as a guy who admits he’s more comfortable with his Pokémon deck than he is tackling people — falls 3.3 points short of Gostkowski as the most valuable overall. Therefore Stephen Gostkowski of the New England Patriots is our 2015 NFL Football Player10 of the Year.

Finally, here, for your perusal, is a sortable table of value added by all punters and kickers this season:

CORRECTION (Jan. 13, 7 p.m.): The original version of this post contained several points that were based on a critical calculation error discovered by a reader, Jason Hahn. In determining the best kickers of 2015, we attempted to exclude onside kicks, but because of an error in how we filtered our data, onside kick recoveries by the kicking team were treated as a touchdown instead of being ignored. After a recalculation, Stephen Gostkowski of the Patriots becomes the most valuable kicker, not Johnny Hekker of the Rams, who moves to second place. In earning kickoff points above expectation, Jordan Gay of the Bills takes second place, not Mike Nugent of the Bengals. The touchbacks kicked by Pat McAfee of the Colts were worth 6 to 8 points over the season, not 8 to 10 points. The rate of all touchbacks reached a high of 57.4 percent in 2015, not 56 percent. The Patriots earned 11.6 points on kickoffs, not 7.7 points. These and other smaller errors have been corrected in the text of the article and in the charts and tables.