In the opening week of the 2014 NFL season, the Dallas Cowboys’ Tony Romo threw three interceptions against the San Francisco 49ers, all with his team trailing. The Cowboys lost that game by double digits, but Romo’s performance earned him consideration for this column’s inaugural Gunslinger of the Week award. It surely soothed Romo’s disappointment.

The Gunslinger award goes to the quarterback who takes the kinds of risks necessary to maximize his team’s chances to win, even if they’re unpopular with the commentariat and regardless of whether they pay off or not. Generally this means a quarterback who is willing to throw interceptions (or otherwise be very aggressive) when his team is down to improve its chances from dire to just not so great.

There has been a lot of great gunslinging in the NFL this year — including from Andrew Luck, the risk-appraising savant who beat out Romo that first week, and Matthew Stafford (who has been establishing himself as an all-time great at big second-half comebacks). But Romo has led the pack.

Despite a narrow and disappointing loss to the Green Bay Packers — who almost represented the NFC in a Super Bowl the NFC almost won — few QBs accomplished as much as Romo did this year. Counting the playoffs, he went 13-4 as a starter and led the league in yards per attempt, NFL Passer Rating and ESPN’s QBR. And while the Cowboys had a strong running game, Romo didn’t exactly have it easy. Here are his 17 games, plotted from start to finish (in seconds), with the point margins Romo faced at the beginning of each passing play:1 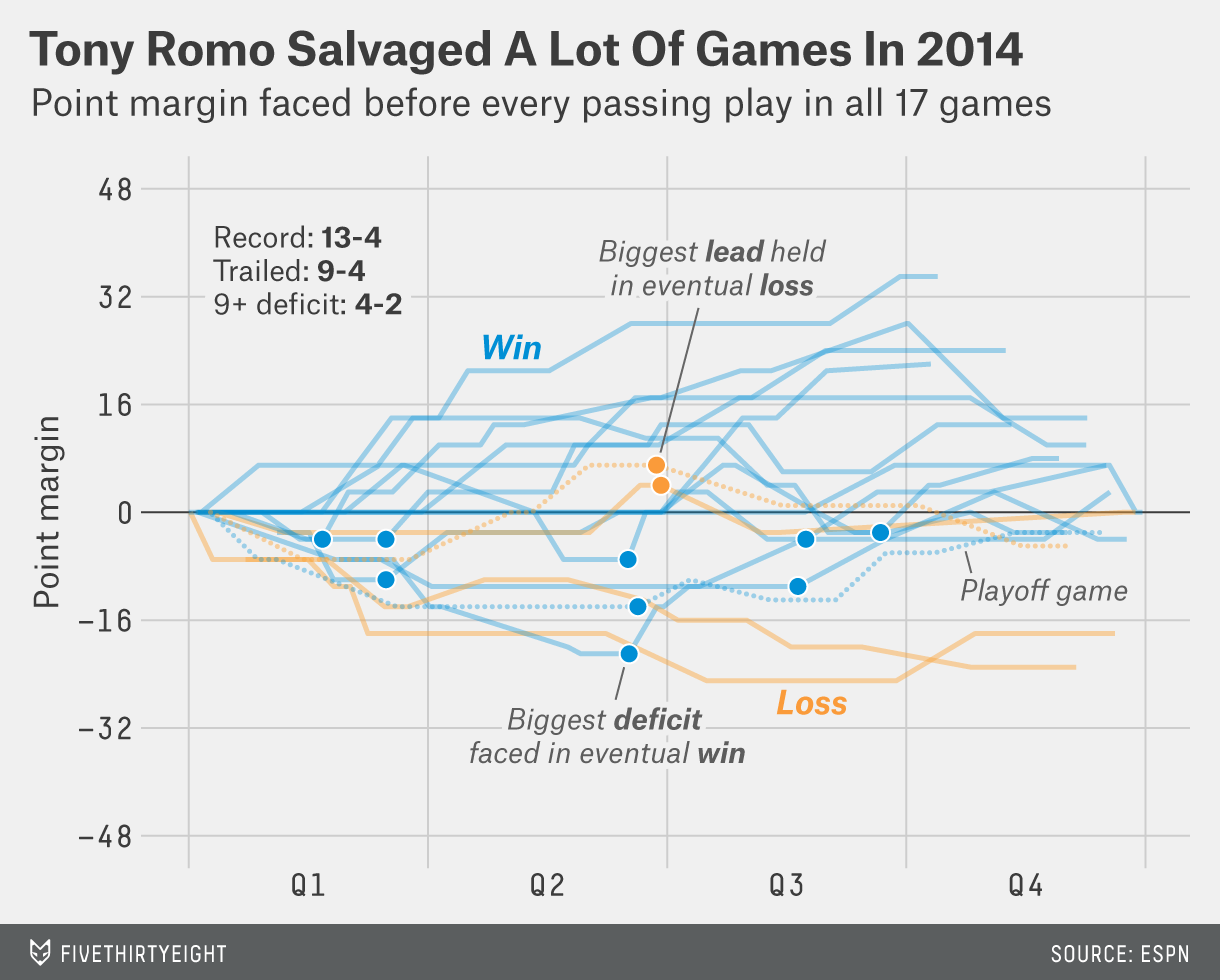 Blue lines are games that his team won, and yellow lines are games that it lost (dashed lines are playoffs). Romo faced a point deficit in 13 of the 17 games, and he won nine of those 13. The yellow and blue circles represent the maximum lead Romo held in a loss and the maximum deficit he faced in a win, respectively. I’ve also included these charts for all other quarterbacks who played in eight or more games at the bottom of this article.

Teams that trail as often as the Cowboys normally don’t win as much as they did. Since 2001, Romo’s 69 percent win rate in games trailed has only been exceeded twice by teams that trailed in 13 or more games. Those teams: Peyton Manning and the Indianapolis Colts in 2009 (who won 10 of 13), and Tom Brady and the New England Patriots in 2011 (who won 11 of 15).2

There’s a standard test I often use when I do gunslinging/comeback analysis: How often did a quarterback lead his team to victory when his team was down by two scores? Last season, Romo led the Cowboys to four victories in the six games in which he faced nine-plus point deficits. That 66 percent win rate is the highest for any team since 2001 that has trailed in as many games. Let’s look at this in historical context (the area of bubbles is proportional to number of games trailed by nine or more): 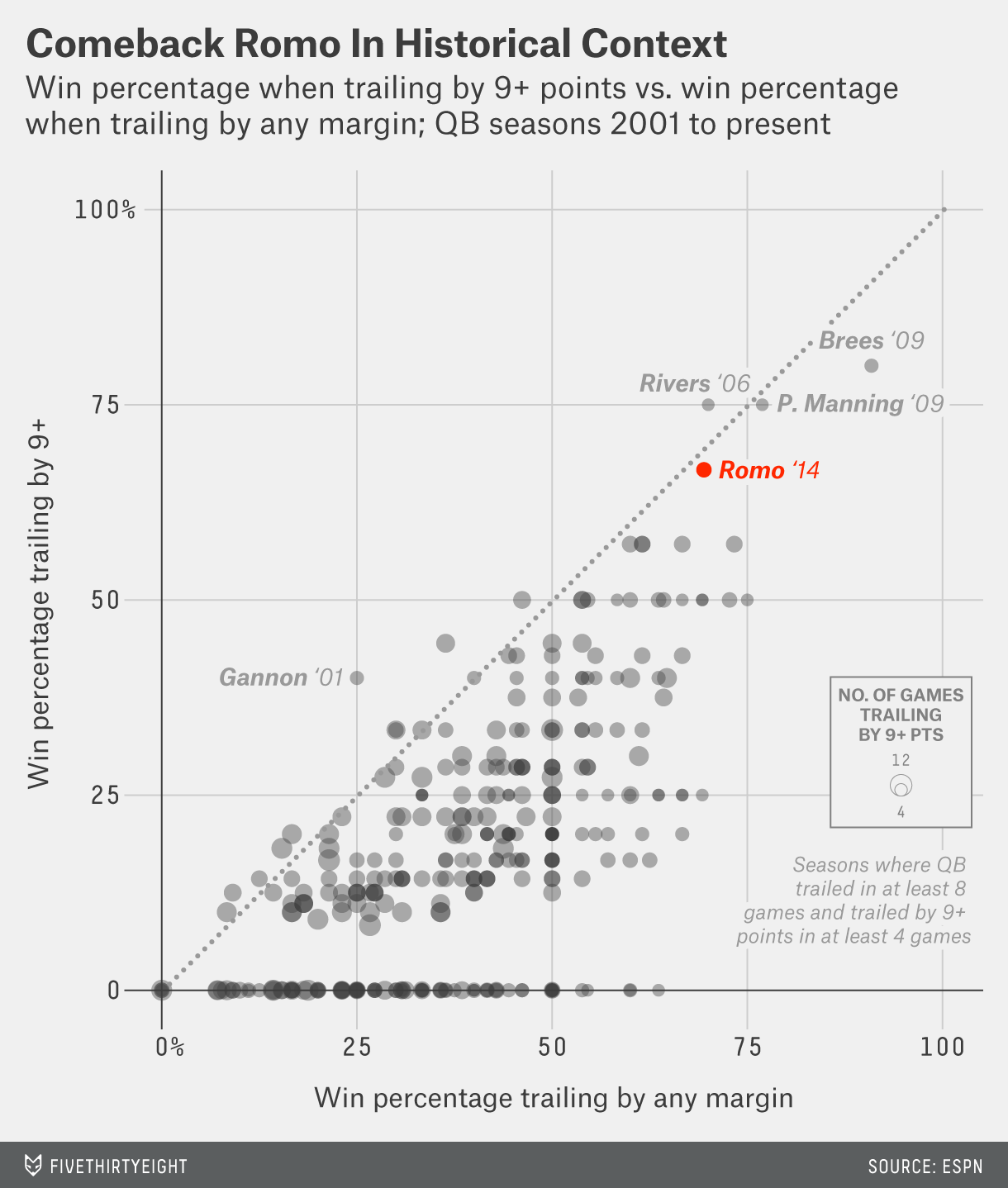 Drew Brees leads the pack with his remarkable 2009 season, in which he and the New Orleans Saints won 10 of 11 games they trailed and four of five that they trailed by nine or more. (Of course, we would expect a team that trailed less often to win a higher percentage of those games). The other two with higher win percentages are Manning in 2009 and Philip Rivers and the San Diego Chargers in 2006, both of whom won three of four. 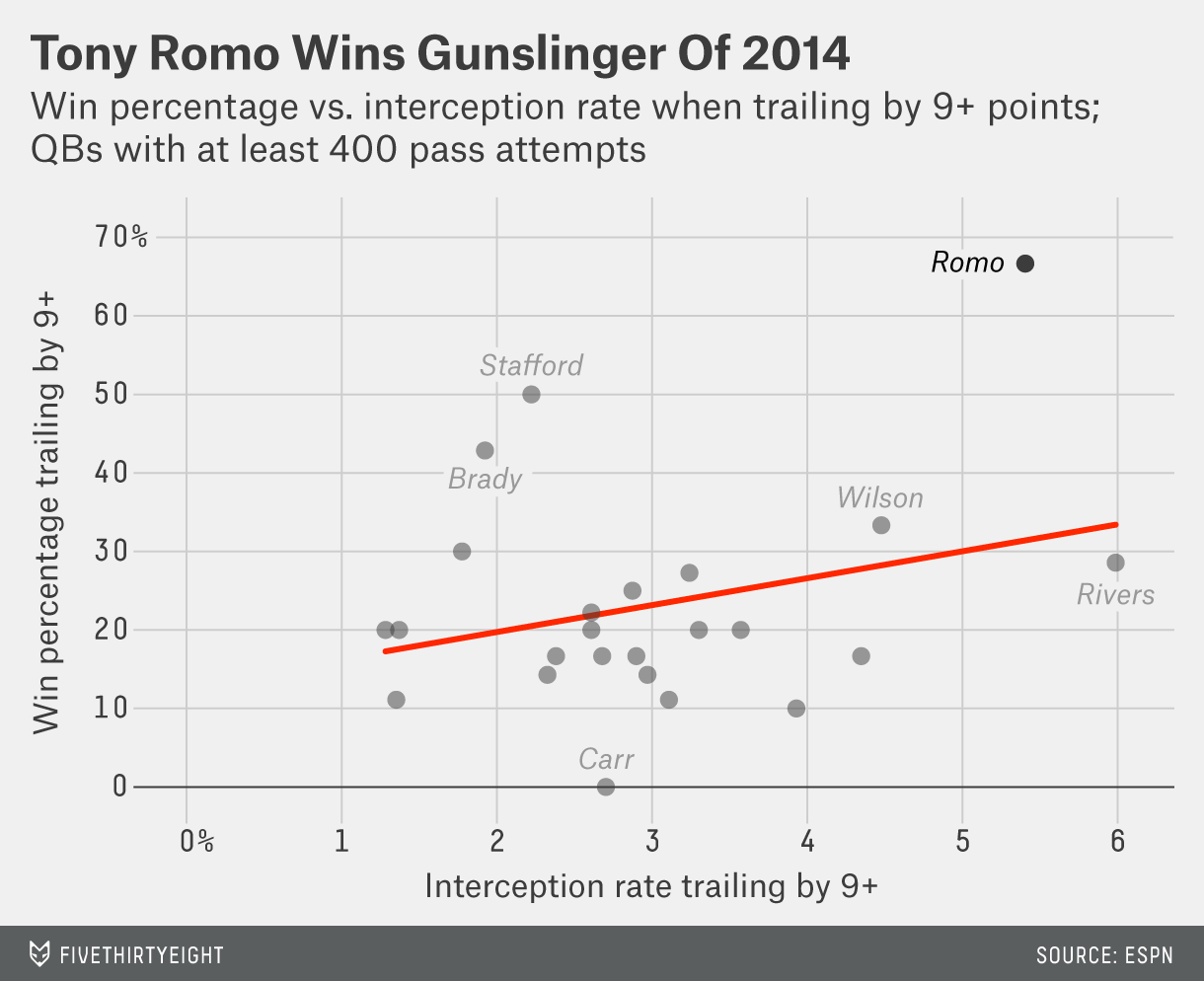 That’s may not look like the best-fitting trend line in history, but it’s pretty amazing that it slopes upward at all. The Gunslinger Hypothesis suggests that, in the long run, taking risks is necessary to maximize wins, even if it may lead to interceptions. But that doesn’t mean we’d expect it to be this easy, in particular because:

This season, of all qualifying quarterbacks, Romo has not only committed to slinging it as much as any quarterback, but his gunslinging has paid immediate dividends. One thing that enabled this is when the Cowboys were up or down by one or fewer scores, Romo’s interception rate was only 0.6 percent — the lowest in the league (yes, even lower than Aaron Rodgers, who posted a 1.2 percent rate in those situations). This is good gunslinging! A QB should take risks when they’re necessary and avoid them when they’re not.3 In the season-results charts, an ideal gunslinging profile is one that has constantly upward-trending lines when leading or close to even, and then a shotgun spray when trailing big. Some QBs just spray all the time and may win a disproportionate amount of games trailed as a result (below, see Stafford, who this year won four of eight games trailing big but also lost four games that his team led).

For being not only one of the slingingest QBs in the league, but also showing just what slinging can do, Tony Romo is our Gunslinger of the Year.

Here are the seasons-in-review charts for the other NFL QBs who played at least eight games (so, every team in the league except the Tennessee Titans is represented).

There are so many story lines embedded below that I hardly know where to begin. But here are a few things that stuck out to me: