On Sunday night, I put out a call on Twitter for burning NFL questions. Among the responses, some guy asked:

@skepticalsports: Is Peyton Manning the best football player of all time?

Whoa, boss. This is a question for which everyone seems to have an answer, but about which few people have anything new to say.

Assessing how good someone is at something is easy if that thing is directly measurable, like running 100 meters, or is independent enough to be measured over time, like hitting a baseball. In sports like basketball or hockey, contributions may be harder to measure, but can often be imputed indirectly: There’s often enough data to see how a team performs with or without individual players.1

But in football, a player’s contribution is impossible to measure directly, because there are too many variables that go into every result. And it can’t be measured indirectly, because the sample sizes are too small (that is, there are relatively few games and not as much data). Thus, player valuation is a quagmire of guesswork and debate.

This is why I prefer questions of limited scope, like, “How certain are you that Peyton Manning is a good quarterback?” For which, the answer is “really extra pretty super-duper certain.” OK, that seems obvious, but ask me the same question about Joe Montana — whom many regard as the greatest quarterback of all time — and I’m not sure. It seems very, very likely to me that Montana was a good quarterback, but I am literally thousands of times less certain of that fact than I am when evaluating Manning.

So we can’t know for sure. But we constantly have to act on things we don’t know for sure. Thus, if my life depended on guessing who was the best NFL player of all time, I’d pick Peyton Manning.2 Not because he’s clearly the best, but because he seems to have the best odds of being the best.

Why do I think that? Have you got all day? OK then, short version, there are four main axes to the issue:3

The second and third axes are probably undervalued. Manning’s unnatural consistency in a number of different scenarios is a unique phenomenon. And this is what Bayesian inference is all about: I’ve just witnessed a phenomenon, and I want to know what the most likely causes are. To do this, I consider the likelihood of each potential cause, and the likelihood of those causes creating that effect.

And so in this case the question is really, which is more likely: that Manning has been uniquely, historically, fortunate in having many great players and coaches around him constantly, or that Manning is a unique, historical talent?

One area where Manning seems unassailable is in the record books, but in fairness to everyone else, he has presided over a distinctly offensive era. So how does his career touchdown record stack up to history?

Let’s summarize every NFL QB’s career in one chart:7 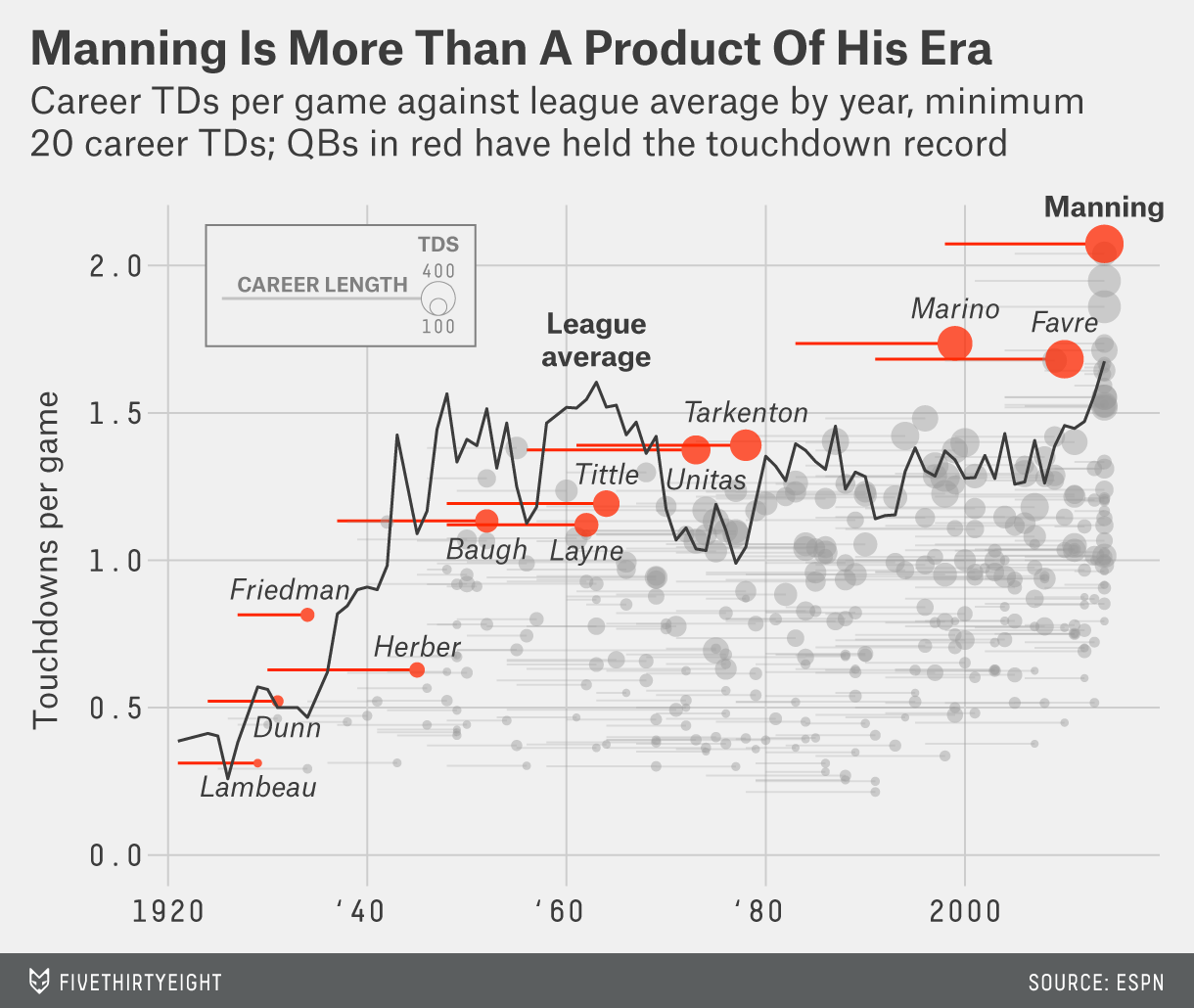 A player’s location on the y-axis represents the number of TDs he has thrown per game played for his entire career. The horizontal lines show the span of his career. The bubble at the end of each career shows you how many touchdown passes he threw in total. The thick black line shows you the NFL’s average TD’s thrown per game by year. What do we take away from this?

First, NFL teams have gotten better at passing for touchdowns, though I was a little surprised at how many touchdowns were thrown in the 50s and 60s. Johnny Unitas, for example, wasn’t nearly the outlier I assumed he would be: While he did break what was then a long-standing record (ultimately by a very large amount), he was also a product of a very passing-friendly era.

Manning now has the largest bubble, obviously, and in a shorter career than Brett Favre’s — so far. But the record-setting QBs are a pretty elite group.

So, relatedly, here’s another question I got on Twitter:

@skepticalsports here's one: Pass TD per game adjusted for era. Where does Peyton rank? How does top 10 look?

Answering this isn’t quite as straightforward as it sounds.

For the largest gap between a player’s TD per game and the baseline for his era, the answer is Peyton Manning. Not only is he the all-time pass touchdown per game leader, but he’s about .7 touchdowns per game higher than the league average for his era. But as a ratio between a passer’s TD per game and that of the entire league during the period he played, he is only in second place. For the highest, you have to go all the way back into the 20s, when Benjamin “Benny” Friedman of the New York Giants got it done: 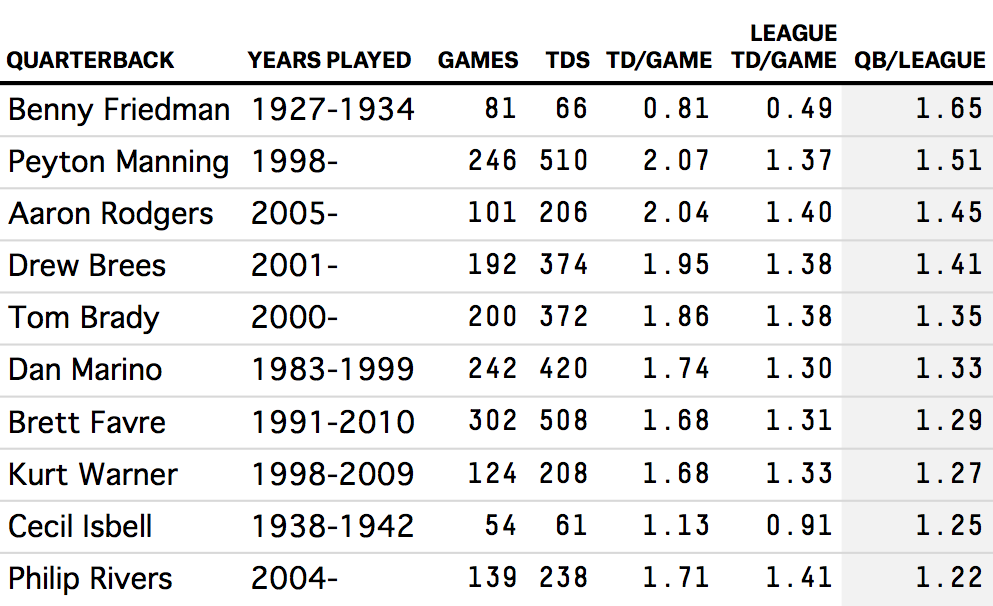 Manning has 1.51 times more TD passes per game than his era, but Friedman had 1.65 times more.

If you look at the details, that 1.65 might not even do it justice. In 1929, Friedman had 20 TD passes. The next highest total that season: six. The entire league (12 teams) had only 81 TD passes; Friedman accounted for nearly one quarter of them. And he was way ahead of his time — the NFL wouldn’t even reach .6 touchdown passes per game until after Friedman retired.

Also worth consideration is Dan Marino. While technically his TD rate may not have been as far above average as Manning’s, he played in an era when no one else was even close.8 Note that Manning has a lot of company in the two TD/game zone, including Aaron Rodgers right beneath him.

I had to do a double take at first because there are so many modern players on that list, despite the fact that the measurement is relative to era. In other words, the current era isn’t just an era of pass-happy offenses, it’s an era in which some offenses are way more pass-happy than others.

This week we saw the Jacksonville Jaguars’ Blake Bortles score his first win (despite throwing three interceptions, he was the first rookie to win a game since last month), and Teddy Bridgewater score his first touchdown pass for the Minnesota Vikings. With the Cleveland Browns’ Manziel still on the bench, the rookie QB game seems to be all about Bortles, Bridgewater and the Raiders’ Derek Carr. Each of these now has at least four full games under their belt — that’s a big achievement unlocked. So let’s start comparing some real stats.

What we learn about rookies is very different from what we learn from other QBs. Normally we care a lot about efficiency and how much a QB helps his team win, but for rookies we’re normally looking for raw production. But let’s take a peek at efficiency anyway, shall we?

Here’s a table comparing the rate at which each QB’s drives end in a touchdown or interception, and the average Expected Points Added (EPA) per drive:

Carr currently leads all three categories. Note that their EPAs are all negative, meaning they are scoring fewer points per drive than a typical NFL team — but Carr is doing the least-worst. 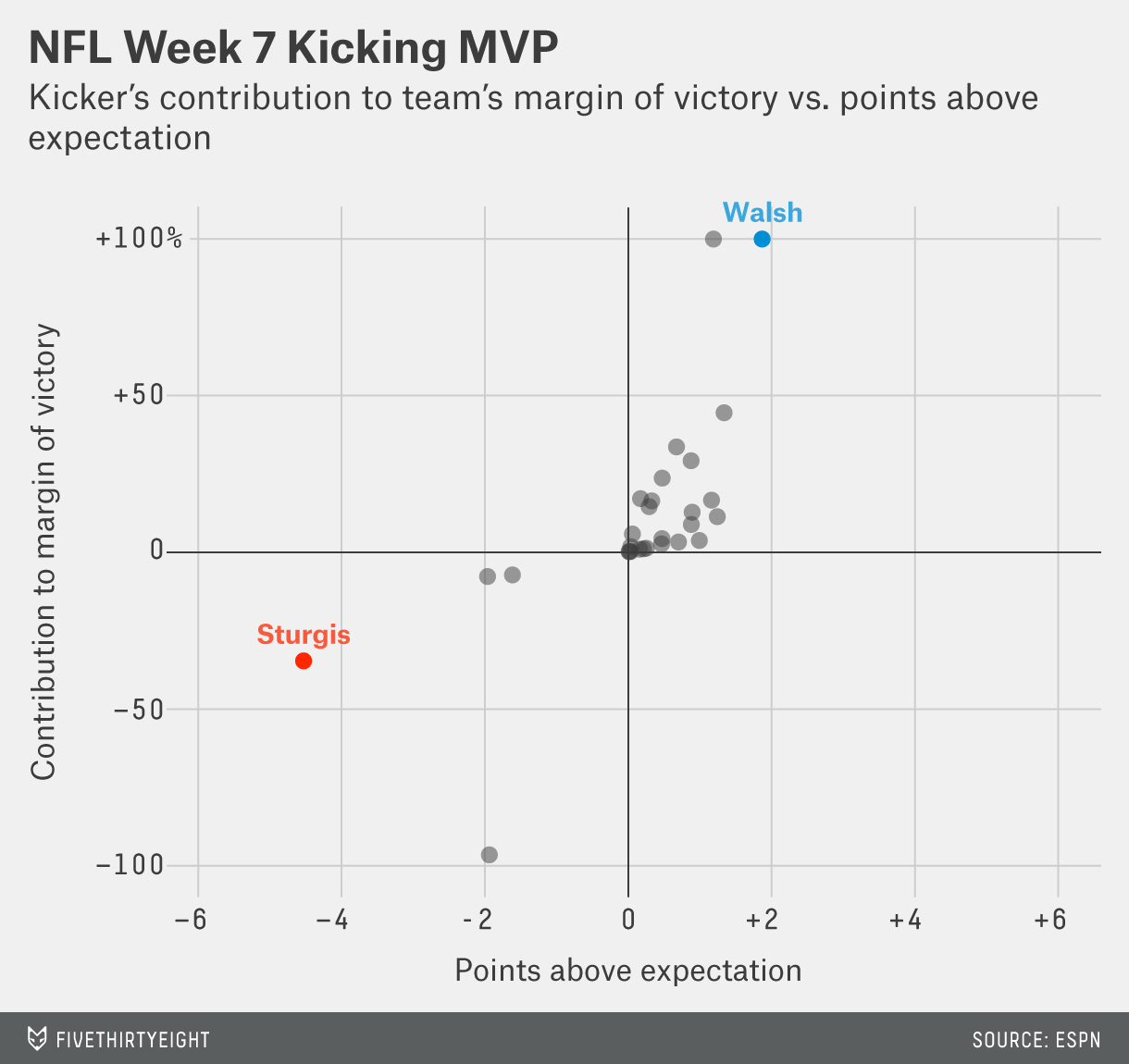 It was kind of a crazy week for kicking, with the entire NFL making just three of eight tries from 50+ yards, but going 45 for 46 on all other attempts. (That’s why you see a large cluster of kickers just to the right of zero in the chart).

Last week I talked about the golden triad of young kickers, which includes Blair Walsh, Justin Tucker and Dan Bailey. All three made all of their kicks in Week 7, and Walsh took the MVK award, largely due to his 55-yard make just before the half. It’s like the Hacker Gods were paying attention and wanted to justify my devoting a large section of this column every week to kickers.9

This week Walsh was one of two kickers (along with Shayne Graham of the New Orleans Saints) who had points above expectation higher than the margin of victory or defeat in their games. Unfortunately, both of their teams lost their games, so no kicker earns a “win” just yet. (My definition of a kicker “win” is that their points above expectation must have been the difference in the game –not just their actual points scored. Kicker “wins” are extremely rare. There have been none so far in 2014, and there were seven in 2013, with Justin Tucker taking two of them. In 2012 there were none.)

Matthew Stafford led his team back from a 14-point third-quarter deficit — still down 13 points with under 4 minutes to go — to win against the New Orleans Saints. Oh, and he threw an interception in the fourth quarter with his team still down 10.

Stafford, for all his woes as QB of the Lions, seems to have a game well suited to the gunslinger paradigm.

Among QBs with 20 or more games with comeback opportunities (down 9+ in the second half), Stafford now has the third-highest winning percentage, behind only Tom Brady and Peyton Manning. This is, of course, despite his relatively high interception rate (e.g., over twice as high as Aaron Rodgers’s): 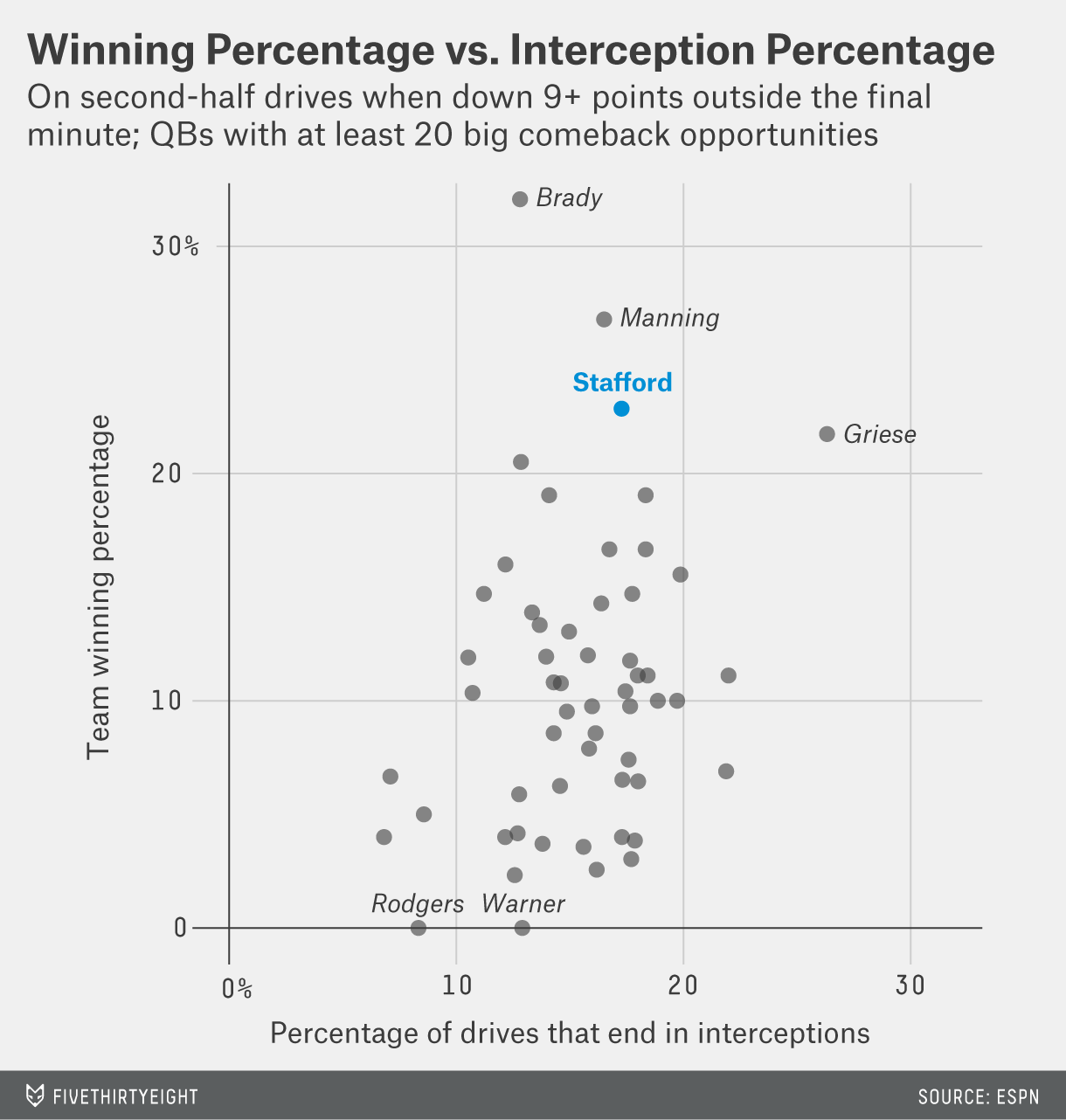 That he did this for lowly Detroit is particularly remarkable to me, since Stafford has gotten some of the worst team support in football.

There’s a basic way to test how much support a QB gets. Winning Percentage Added (WPA) is a stat that measures how a team’s chances of winning a game (based on league-wide models for a typical team) change after each play. Thus, a QB’s WPA for a game is how much his team’s chances of winning increased on the plays he was involved with. All else being equal, his team should win a game about 50 percent of the time plus the QB’s WPA.11

If you take this estimate and then subtract from the actual result, you get a figure equal to the amount of winning percentage added by elements of the team that are NOT the passing game (including running, defense, and special teams). We can plot a comparison between these two like so: 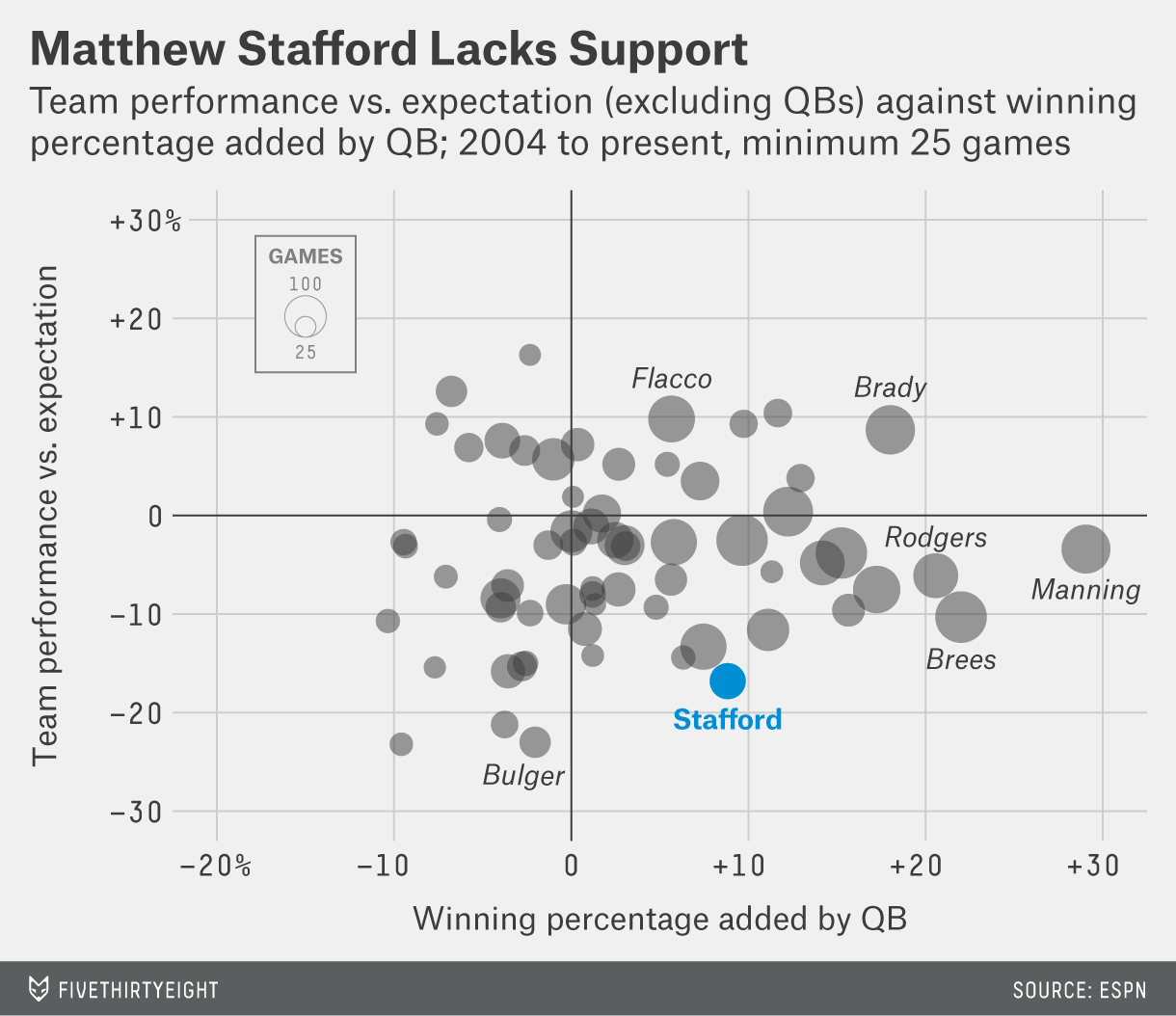 Some QBs like Tom Brady and Joe Flacco actually win more often than their passing would suggest, meaning the non-passing part of their team is contributing as well. Others have to overcome bad teams. Stafford is a great example of this, as he typically adds close to 10 percent to his teams chances, only to see even more stripped in the plays where he isn’t an active participant. In fact, Stafford gets the worst support of any QB with a positive WPA.

Most empirically significant game of Week 8

Lots of great and/or interesting QB matchups in Week 8, such as:

Ooh, the final matchup is an interesting one. Two 25-year-old former rookie Pro Bowlers known for their running abilities — one 5 feet 11 inches and the other 6 feet 6 inches.

Last week, Wilson joined the illustrious list of QBs who passed for 300 yards and ran for 100 in the same game:

Yet the Seahawks picked up their third loss, equaling Wilson’s total from last season. As the boss notes, the Seahawks are in a precarious spot, such that, even aside from the information value of a loss, it may get very hard for the Hawks to make the playoffs even if they’re really good, considering their schedule and division. Are the Seahawks going to be a dynasty like the Pats or teams-Peyton-Manning-is-QBing? Or will they regress to the mean and/or burn out like most teams do?

Both teams are 3-3 (though Carolina also has a tie). Historically, teams that start 4-3 make the playoffs about 30 percentage points more often than teams that start 3-4 (about 50 percent vs. about 20 percent). So it’s a high-leverage game on both sides.