There have been weeks when the Hacker Gods1 have read my words and, out of spite, scorn or general ambivalence, gone out of their way to prove my alleged insights wrong. This was not one of them.

Charts of the Week

What a week for quarterback box scores! Perennial Skeptical Football muse Peyton Manning kicked things off last Thursday night with 286 yards, 71 percent passing and three touchdowns in the Denver Broncos’ win against a strong San Diego Chargers team. But by the end of the Week 8, his 124.2 passer rating was only sixth-best.

Leading the way was Ben Roethlisberger, who had six touchdowns and 522 yards for the Pittsburgh Steelers, completing 40 of 49 passes. Tom Brady pulled the “as many touchdowns as incomplete passes” trick with five TDs and 354 yards, completing 30 of his 35 passes for the New England Patriots. And then Kyle Orton had a monster throwback performance with four TDs and 238 yards on just 10 completions and 17 attempts for the Buffalo Bills — a surprising powerhouse halfway through the season.

ESPN Stats and Info tweeted that Roethlisberger’s 99.0 Total QBR was the highest in the history of that stat2 (which, unlike passer rating, has no specific maximum value — a quarterback can only get closer and closer to 100). So naturally that got me wondering how these games stacked up historically, which prompted me to, naturally, put every QB game ever played3on one chart. 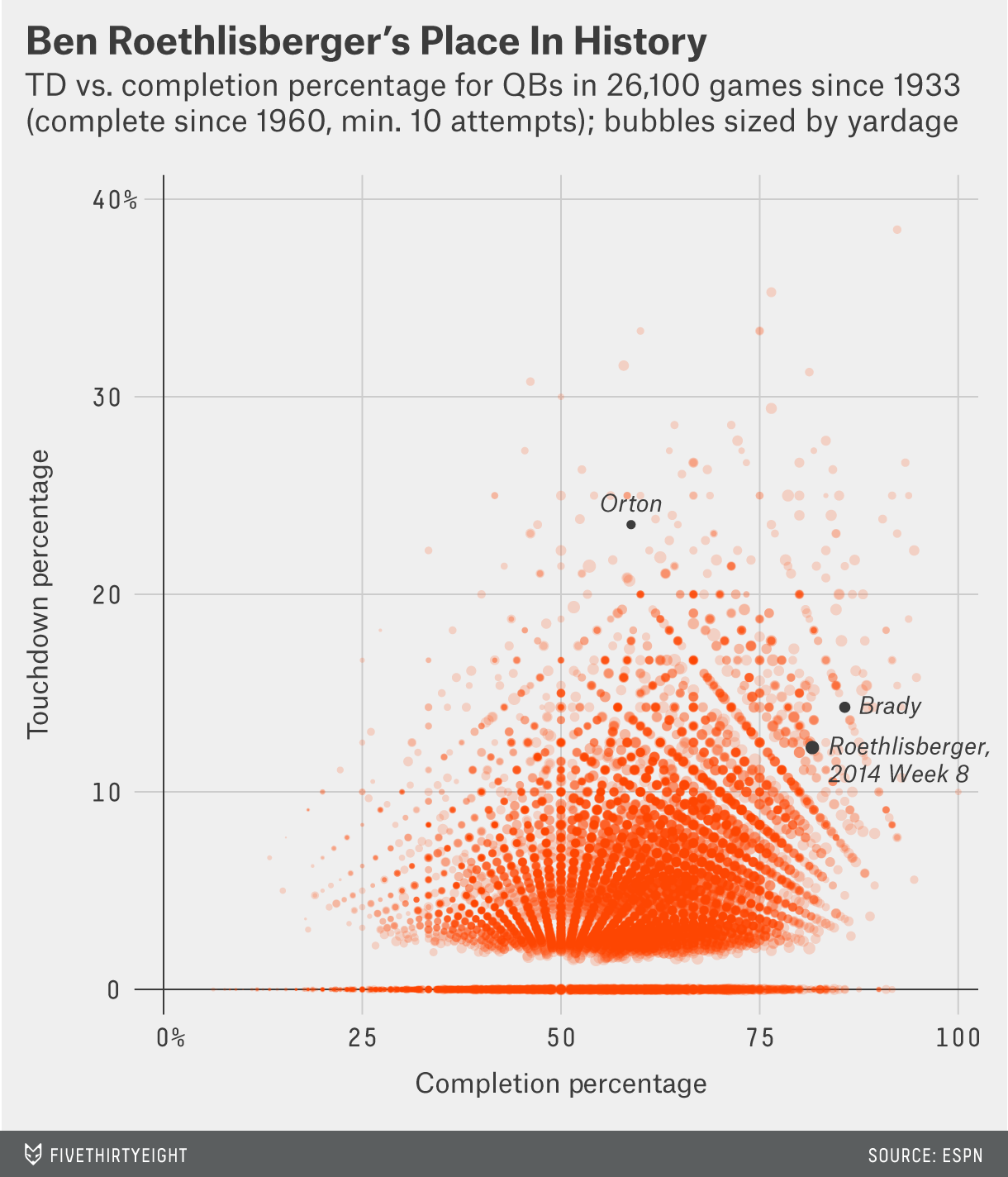 Each bubble represents one of the 26,100 games in which a QB had 10 or more attempts. The x-axis and y-axis are completion and touchdown percentages, respectively. The size of each bubble corresponds to passing yards.

That dot out there in the upper right is Frank Ryan, quarterback of the NFL champion Cleveland Browns, who, on Dec. 12, 1964, went 12 of 13 for 202 yards and five touchdowns. On efficiency alone, Roethlisberger or Brady’s games don’t come close to that.

On the other hand, Roethlisberger’s performance stands out for its size, as well as its efficiency. It’s tied for the third-largest bubble on the board (522 yards). To put that in perspective: If a quarterback started a game with Ryan’s epic 12-of -13, four-TD performance, matching Roethlisberger would still require going 28 of 36 for 320 yards and one TD after that.

In light of this, here’s the same chart as above, except with yards on the y-axis and bubble size reflecting number of TDs: 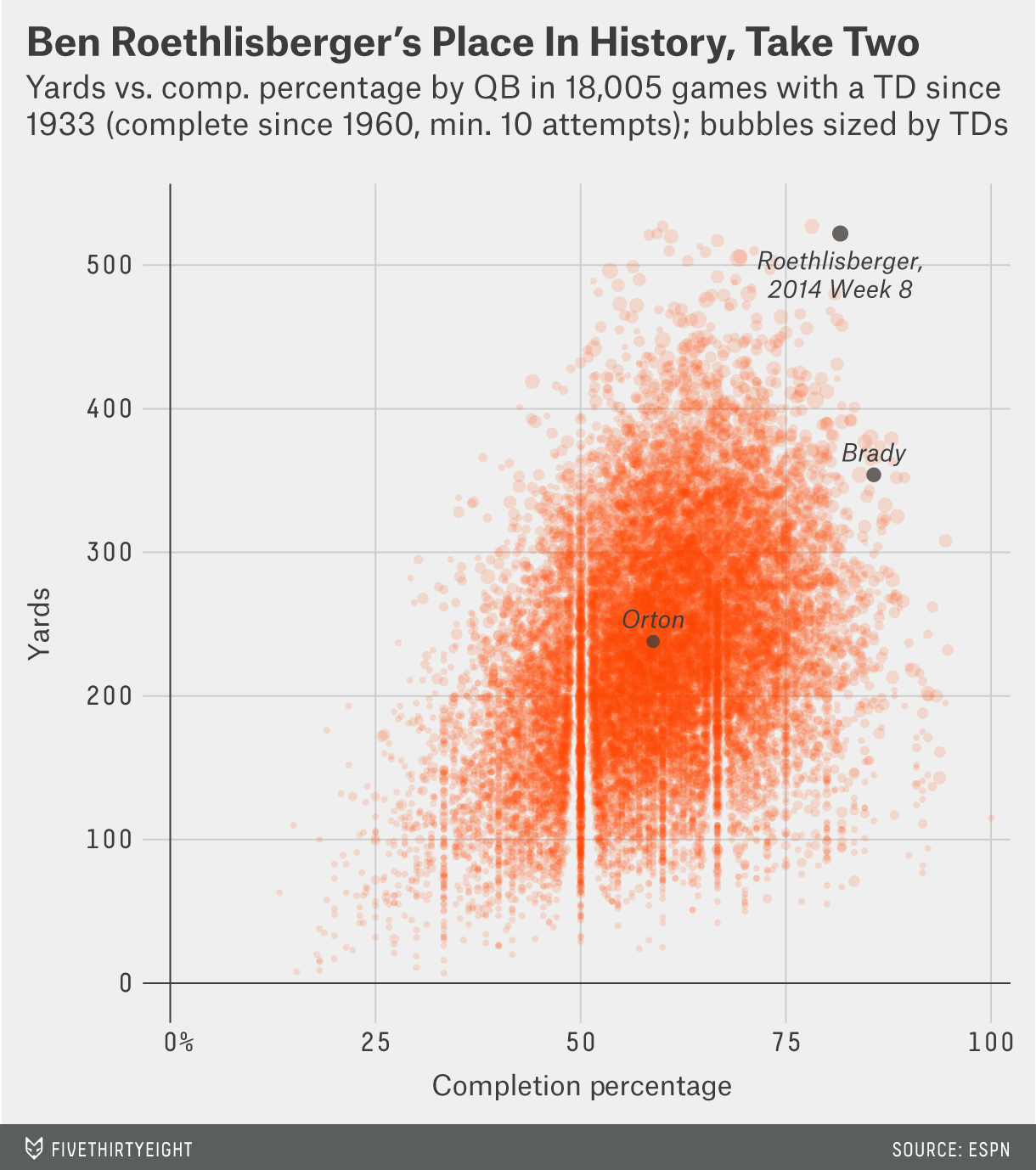 Zack Mettenberger, welcome to the Rookie QB Watch! The sixth-round pick got his first start for the Tennessee Titans last week, making him the fourth rookie to start this season. And he did a pretty good job:

Hartline’s question is tougher to answer than you might expect. There are three things to love about Mettenberger’s performance: 1) He was in the game. 2) He threw for lots of yards. 3) He tallied two TDs. These are all things that predict success for rookie QBs later in their careers, and Mettenberger’s stat line is fairly rare for rookies, who have thrown for 299+ yards and 2+ TDs only 70 times before.

However, late-round picks who are pressed into action early (like Mettenberger) are a rare species, and successful ones are even rarer.

Which is not to say that good QBs can’t come late in the draft (or even undrafted). A lot of great quarterbacks come from humble origins:

But those are the cream of a very large crop. Two hundred ninety-three quarterbacks have been taken in the sixth round or lower, and just 21 of them had minimally “successful” careers (which I define as a career Approximate Value of 32).

“Successful” late draft picks who were pressed into action their rookie year include the likes of Don Majkowski, George Ratterman, Rodney Peete, Gus Frerotte and Ryan Fitzpatrick. Not the most illustrious list, but when it comes to late-rounders, there’s not a lot of data to go on.

What is pretty certain is that Mettenberger’s odds are improved from where they were before the season (less than 10 percent) to somewhere more on par with a high draft pick. But even with an impressive first showing, I don’t think there’s any reason he would jump ahead of any of the rookies who are already playing. My “career prospects” ranking as it stands now: 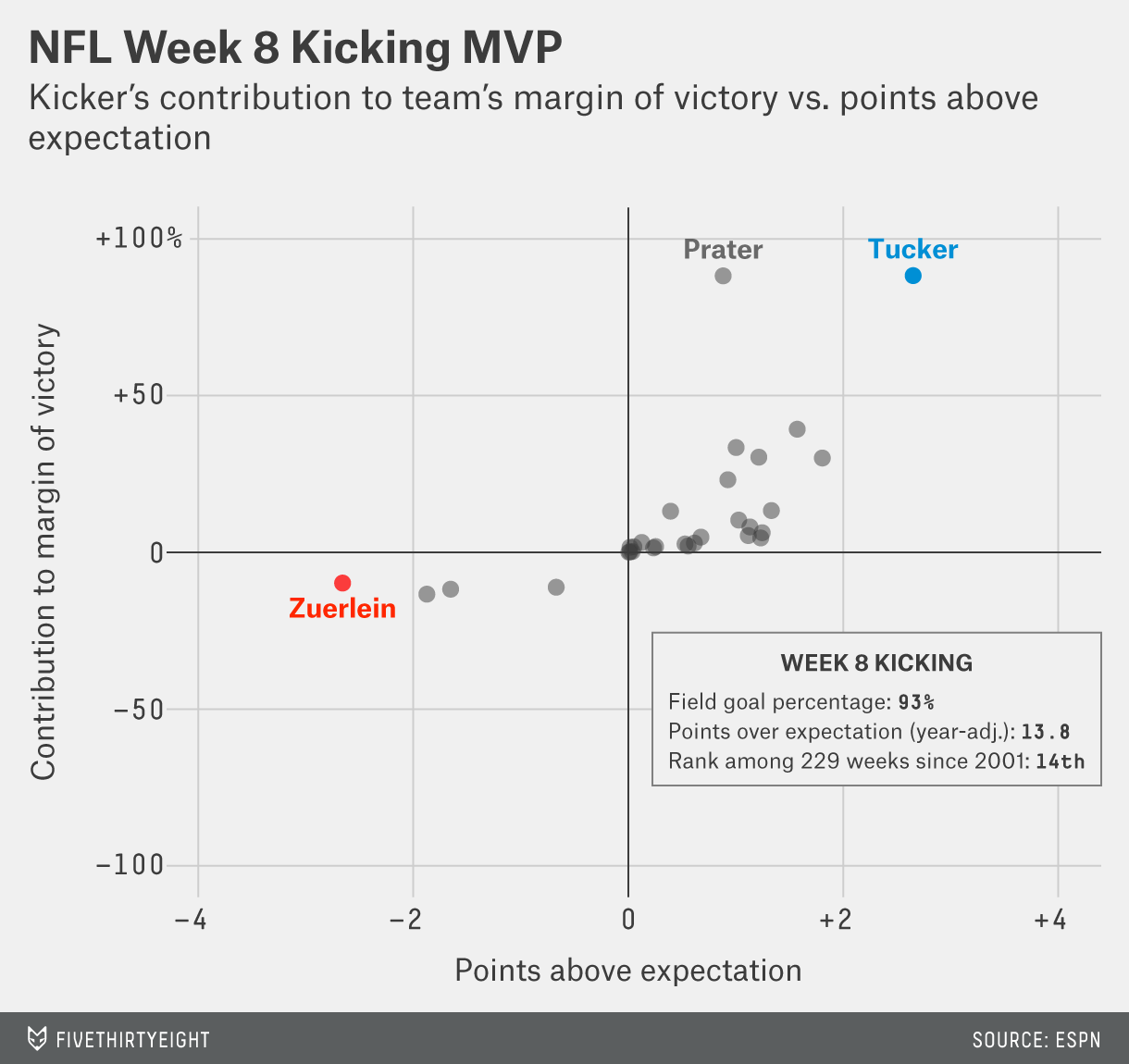 In Week 8 games, NFL kickers struck back with a vengeance, going 9-2 on 50+ yard field goal attempts4 after a bad Week 7. On all other field goals, the league went 44-2, meaning it went 53-4 overall and performed 13.8 points above expectation (although there was a missed extra point in there). It was the best kicking week for the league since Week 5 of 2013, and the 14th-best week overall since 2001.5

Greg Zuerlein of the St. Louis Rams is the goat this week, though he didn’t hurt his team’s chances very much (no kicker did). Zuerlein takes the award because he missed a 38-yard attempt. Congrats, you’re the (read: my algorithm’s) least valuable kicker of the week!

For most valuable kicker, Matt Prater was a strong contender, hitting the game winner for Detroit in a game the Lions won by one point. But the best performance came from the Baltimore Ravens’ Justin Tucker, who made kicks of 45, 50 and 53 yards.

Just two weeks ago, I mentioned that Tucker, Blair Walsh of the Vikings and Dan Bailey of the Dallas Cowboys represented the next generation of great kickers, and now they have back-to-back-to-back MVK awards to show for it.

DeMarco Murray is having a record-breaking season so far, so I was surprised when I pulled up his efficiency stats (I’ve written about Murray’s running profile myself). Murray, despite starting the season with eight 100+ yard games on a 6-2 Cowboys team hasn’t been among the top win- or point-generating backs in football this year. He has a Win Percentage Added per attempt of 0.14 percent (12th-best in the league for running backs with 50+ attempts) and an Expected Points Added (EPA) per attempt of .03 (10th-best, less than a third of perpetual badass Jamaal Charles’s).

So to get a better sense of what’s going on with him, I plotted WPA vs. a team’s expected win percentage before the play for each regular-season rush since 2001. I’ve highlighted Murray’s winning and losing efforts in green and red, respectively: 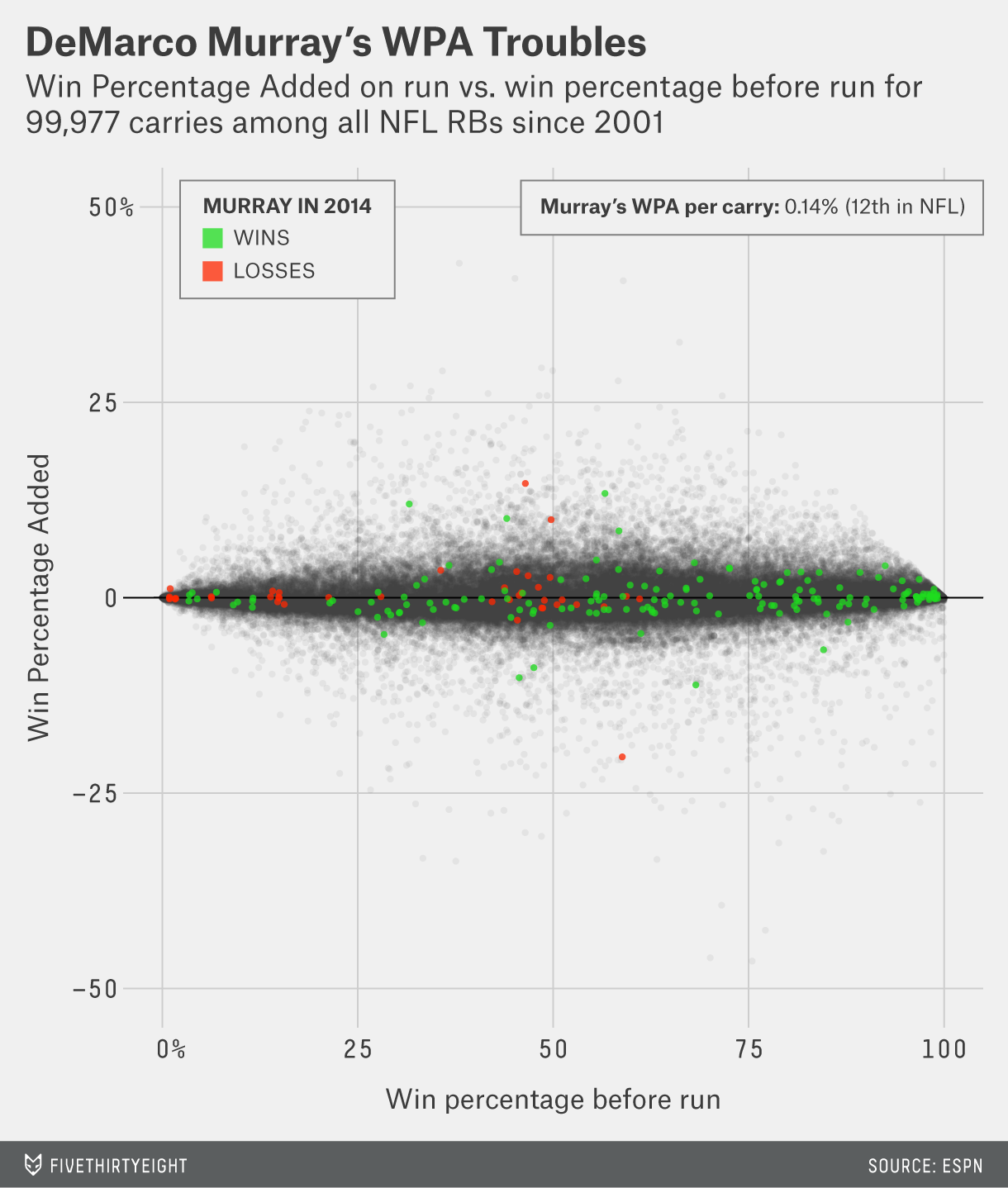 The lion’s share (almost 35 percent) of Murray’s runs have come when the Cowboys already have a 75 percent or higher chance of winning, and he has helped the Cowboys clamp down in those situations a bit. He has had a few big runs in close situations, but he has also had a number of mistakes: three fumbles lost on rushing attempts this year (five overall), including a fumble returned for a touchdown against the San Francisco 49ers on Murray’s first carry of the season (the red outlier on the bottom of that chart). Those plays alone have cost Dallas about .4 expected wins.6

Fumbles have an enormous effect on WPA/EPA stats despite having extremely high variance. This is an inherent danger of stats that measure actual results — no matter how accurately they do so — rather than trying to predict performance. They can be greatly affected by things that aren’t predictively reliable. In general, solid predictive stats in the NFL are extremely rare relative to other sports.

Two familiar faces for Skeptical Football found themselves in deep holes Week 8. I’ve previously written that Aaron Rodgers may be too cautious in comeback situations, maintaining a low interception rate but not maximizing the Green Bay Packers’ chances of winning. Then he threw two interceptions in a losing effort against the New Orleans Saints.

Sarcasm appreciated, except, no. Neither of his interceptions was very good: The first came in a tie game on the goal line, which is an obviously bad thing. The second violated one of my rules of interceptions, which is that they should at least have netted a first down had they been caught. (Yet, it did bounce off the receiver’s hands, so Rodgers deserves neither the fault nor the credit for it.)

These short passes suggest Rodgers was taking what the defense gave him, which is great quarterbacking strategy in most situations. But when a QB is down three touchdowns, he needs to take risks and throw downfield into double-coverage every once in a while.

In other words, Aaron Rodgers is not my Gunslinger of the Week.

The Gunslinger award goes to … Matthew Stafford. Again. I featured him in last week’s column, and now he put up another impressive comeback (from 21 points down this time) in London against the Atlanta Falcons — in which he threw another downfield interception while trying to bring his team back.

I previously rewarded Nick Foles with Gunslinger of the Quarter-Season in part for taking shots downfield. So, I thought it might be fun to look at solely how far a QB tends to throw downfield when in comeback situations, and whether that can predict how often they win. As it turns out, there is a positive correlation, albeit a noisy one: 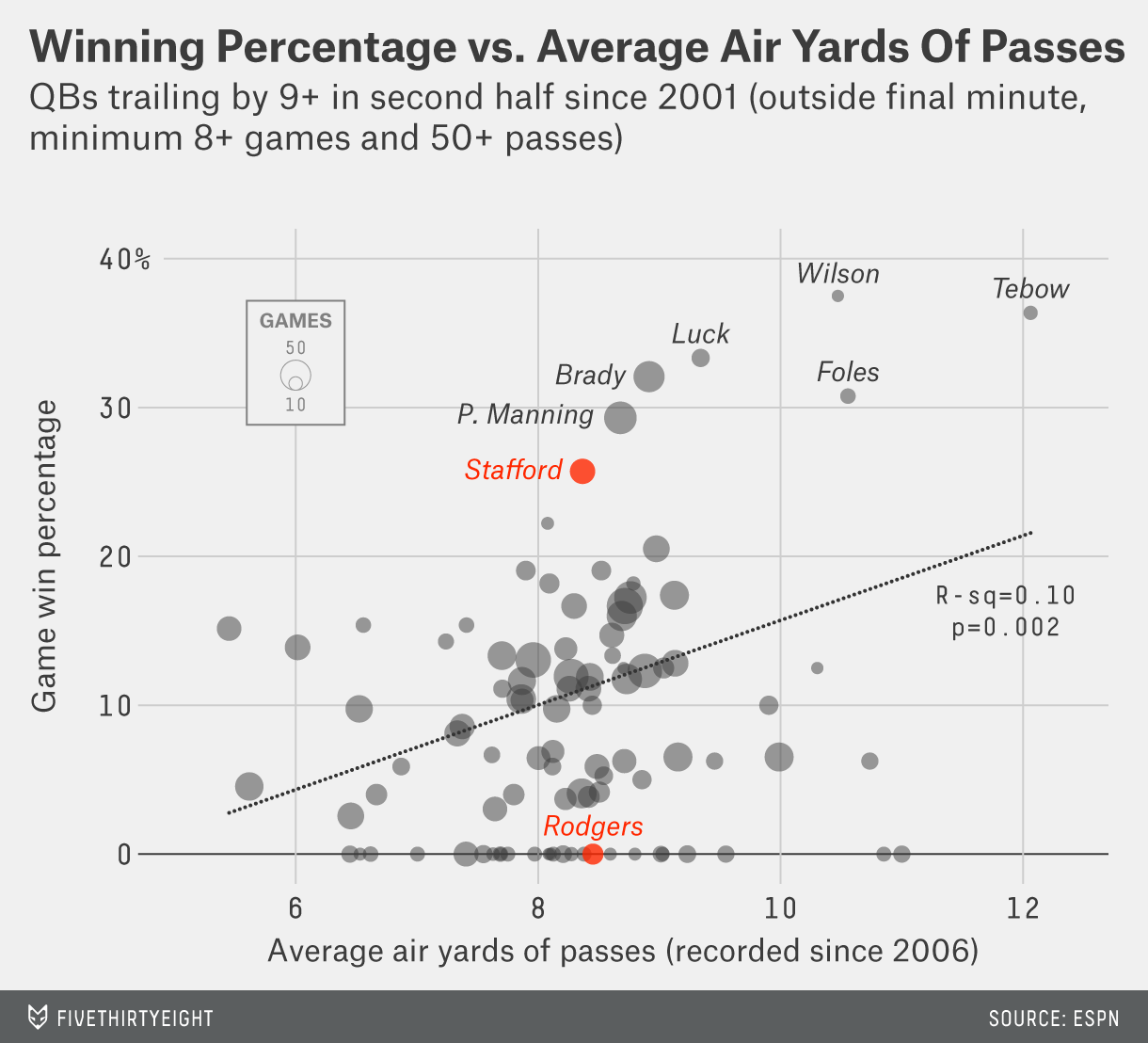 Recent history notwithstanding, Stafford and Rodgers are pretty similar in this area. In comeback situations, the overall relationship between the average yards each quarterback’s passes travel in the air and their win percentage is positive7.

But being a good gunslinger and being a good QB aren’t perfectly correlated. There are some skills (i.e. the high-risk, high-reward ones) that suit the comeback scenario well but may not work as well in normal situations. Tim Tebow, for example, threw even further downfield on average in non-comeback situations despite throwing the furthest downfield in comeback situations by a wide margin. He had a great record at comebacks but was not a great quarterback — perhaps, in part, because he was chucking it too much under normal circumstances.

The goal of gunslinging isn’t to win a high percentage of comeback games, but to win more than 15 to 20 percent of them. It’s more of a special case under the broader taxonomy of “clutchness” — a concept overvalued by the broader public but probably undervalued by the stats community — which is all about phenomena involving a divergence between win-maximization expectation and point-maximization expectation. It’s not about magic or mumbo jumbo. It’s about winning.

Most empirically significant game of next week

Whom am I kidding? It’s Manning vs. Brady.

As I’ve said before, the two most powerful forces in the history of football are probably Peyton Manning and Bill Belichick/Tom Brady (whichever of them is responsible for New England). Naturally, it’s always exciting to see these forces square off against each other, and every time we learn more about how the best go about their business.