“Now that I’m older … I really do think I’m the greatest receiver to ever play this game.” — Randy Moss, before the Super Bowl in 2013.

When Randy Moss proclaimed that he was the greatest receiver ever, he was wearing the same-color uniform as Jerry Rice. Rice, the consensus Greatest Receiver Of All Time™, did not have Moss’s up-and-down career. He was not marred by frequent controversy, nor periods where, by his own admission, he didn’t go all-out on every play. He was Jerry Rice, the guy who finished ahead of Moss1 in the all-time list of receiving yards and atop the receiving touchdowns list, too, well ahead of Moss.

But there’s one widely known football expert who makes an excellent case for Moss: Randy Moss.

Here’s the rest of what he had to say in that infamous press conference:

Moss — despite leading the league with 17 receiving touchdowns as a rookie, holding the all-time single-season receiving TD record (with 23), and posting 10 or more touchdowns in a season nine times in his career — was saying we should ignore his stats. He wanted us, the commentariat, to take stock of some kind of intangible “impact” he had.

Moss may be even more right than he knows. Not necessarily about being “the greatest” — that kind of claim depends too much upon subjective interpretations of greatness to be attackable empirically — but if we put aside his receiving numbers and just measure his impact on the game, Moss is pretty much boss.

Moreover — in part by virtue of his many controversies — Moss may have created one the greatest (and most important) data sets in the history of football.

If there’s one thing we know about Randy Moss, it’s that he makes QBs look good, going all the way back to 1997, when Moss and Chad Pennington led the nation in touchdown catches (26) and passes (42) for Marshall. Here’s a quick recap of Moss’s NFL career, from the perspective of his quarterbacks:

If you’re keeping score at home, that’s somewhere between (inarguably) five and (arguably) seven quarterbacks who have all had career years with Moss on the field with them. And indeed, the “Moss effect” is backed up by numbers. Across a whole slew of different statistics, the QBs Moss has worked with have been better with him than without him. The eight QBs with whom Moss has played at least eight games have averaged 48 more yards per game, seen their completion and touchdown percentages rise by an average of 3.7 percentage points and 1.6 percentage points, respectively, ultimately averaging nearly a full yard per pass attempt more in the games with him than without him. One yard per attempt may not sound like much, but that’s about the difference between Peyton Manning (7.7 YPA) and Neil O’Donnell (6.7 YPA).

For most players, this type of analysis generally involves a relatively small number of games for comparison, and other factors can come into play one way or another. The number of variables in football are so great, and the degrees of freedom so few, that we could never compute, say, Adjusted Plus/Minus for players. (This is why disentangling quarterback statistics from those of their supporting casts — especially receivers — is so difficult.) But one way to gain perspective on Moss’s With-Or-Without-You (WOWY) effect is to look at his effect on how efficiently his teams passed the ball — after controlling for how good his quarterbacks were without him — and compare that to the numbers for other receivers in history.3 Only two receivers in NFL history other than Moss4 were associated with a larger uptick in passing efficiency from their quarterbacks — former Denver Broncos teammates Ed McCaffrey and Rod Smith.

McCaffrey and Smith were the primary late-career targets for Hall of Fame quarterback John Elway, whose lifetime numbers took a strange arc. As a young QB, Elway enjoyed an elite reputation despite surprisingly pedestrian passing efficiency; only later did he post the quality of statistics we’d normally associate with a passer of his prominence. Smith and McCaffrey were both present for those improved seasons, which boosted their WOWY scores even further because of the advanced age at which Elway produced them.

But in terms of individual influence, it’s tricky to disentangle McCaffrey and Smith from each other — and that’s before considering the effect Broncos head coach Mike Shanahan and running back Terrell Davis5 had on Elway’s rehabilitated numbers. Despite the Denver duo’s great WOWY numbers, we still can’t pinpoint which element made the biggest difference to Elway’s statistical upgrade.

Moss’s case as a difference-maker is much easier to argue, because his observed effect held up over such a large number of situations, and with many different QBs. Let’s look at YPA difference and touchdown percentage difference for all wide receivers who have played at least eight games with at least three different quarterbacks6: 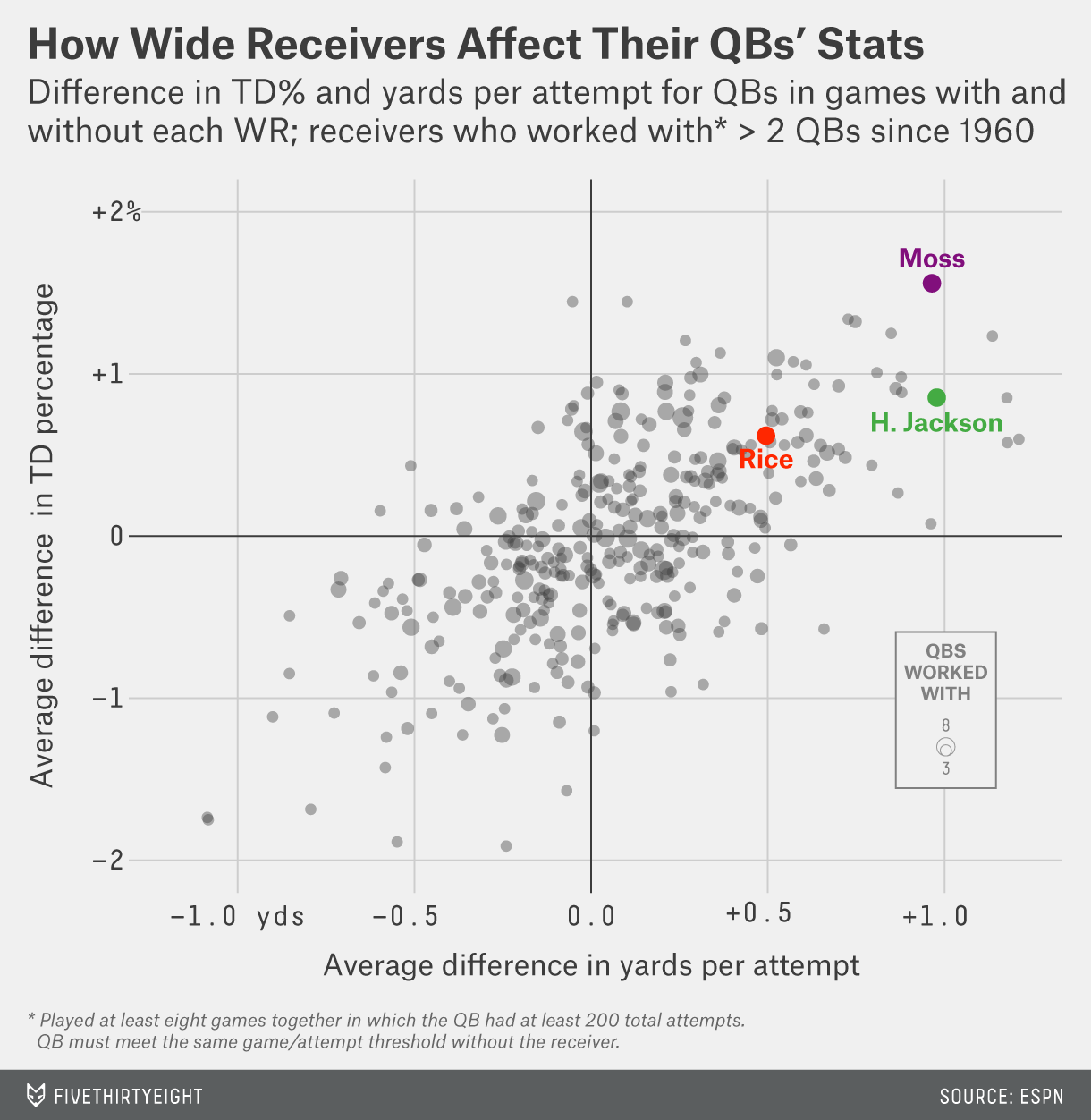 The bubble sizes correspond to the number of QBs each receiver worked with. The purple is Moss, and the only player “in his neighborhood” with a similar number of QBs is Harold Jackson, who played from the late ’60s to the early ’80s. Jerry Rice also put up impressive numbers with eight quarterbacks (though his career had a lengthy denouement), but his average “impact” was roughly half Moss’s on both axes.

Moreover, Moss’s impact was remarkably consistent. Here’s a quick summary of the WOWY difference for each of the eight QBs Moss played with for at least eight games:

It’s possible that some other receiver actually had just as much or more of an impact as Moss, but didn’t have the right combination of good fortune/bad habits to prove himself in such a variety of circumstances. It’s possible. But for any given receiver (even some of the greats), the truth is lost in the informational black hole that is NFL statistical entanglement. At least with Moss, there’s no doubt about his effect — or at least less doubt than with just about anyone else.

This is why, ultimately, the sample size is what takes Moss from being a garden-variety outlier to a historically important outlier. It’s great to know that Moss is pretty damn good, but even knowing how good a receiver is (with any degree of certainty) is itself a valuable commodity.

When told of the aforementioned comments by Moss, Jerry Rice quipped: “I impacted the game by winning Super Bowls.”

While that also sounds like bravado, maybe Rice is more right than he knows, too. If Rice was as good a receiver as we’re pretty sure Moss was, it’s possible San Francisco’s Super Bowls were won in large part by Rice. Joe Montana had 7.6 yards per attempt for his career in San Francisco. If Rice were responsible for 1 YPA of that, Montana’s underlying value might be less Greatest Of All Time and more Rex Grossman (career YPA 6.6).7

But Moss’s greatest contribution may be how his career informs our broader understanding of football: If one man’s ability to run deep and jump high can affect the game so drastically, then the right combination of components, mismatches, or strategies may break the game open at any time. Moss’s career gives us a glimpse at football dynamics that we can usually only speculate about, and it shows us that the game may be even more fascinating and harder to understand than we originally thought.