We here at FiveThirtyEight have been riding the Warriors bandwagon for a long time. Good thing they won the championship Tuesday! But now the question is how many more titles Steph Curry and company might expect in their future.

Let’s take a really simple approach. We’ll identify other teams that, like the Warriors, had a big breakthrough and quickly went from being good to really great. More specifically, we’ll look for teams that had a composite Elo rating of 1700 or higher, which is a rating that we’d ordinarily associate with a championship-caliber team, and whose Elo rating improved by at least 100 points from the previous season.

There were only 13 of these teams before the Warriors, it turns out. You can find them below. 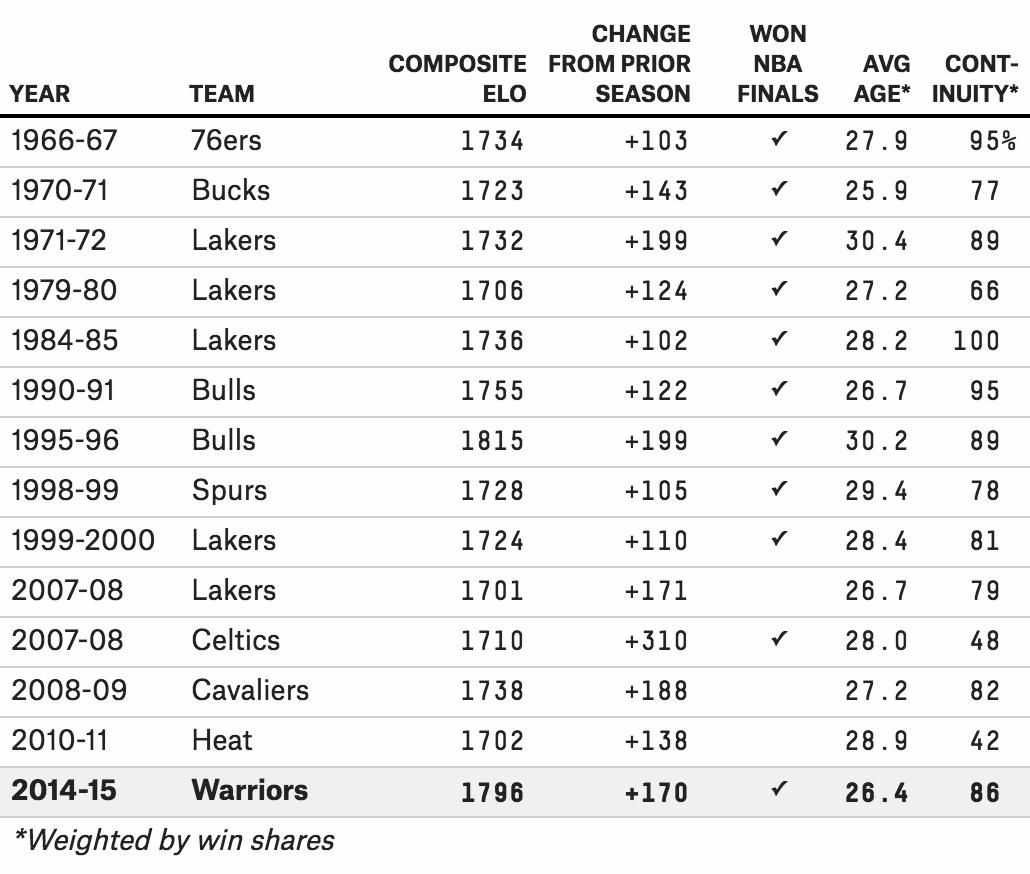 That’s a pretty good group. You see Michael Jordan’s Bulls (twice), along with Tim Duncan’s Spurs and several of the Lakers’ mini-dynasties. But there are also a couple of cases of teams that didn’t quite live up to their promise. The next chart shows how many games each team won in the seven seasons after its breakthrough, along with whether it reached or won the NBA Finals. 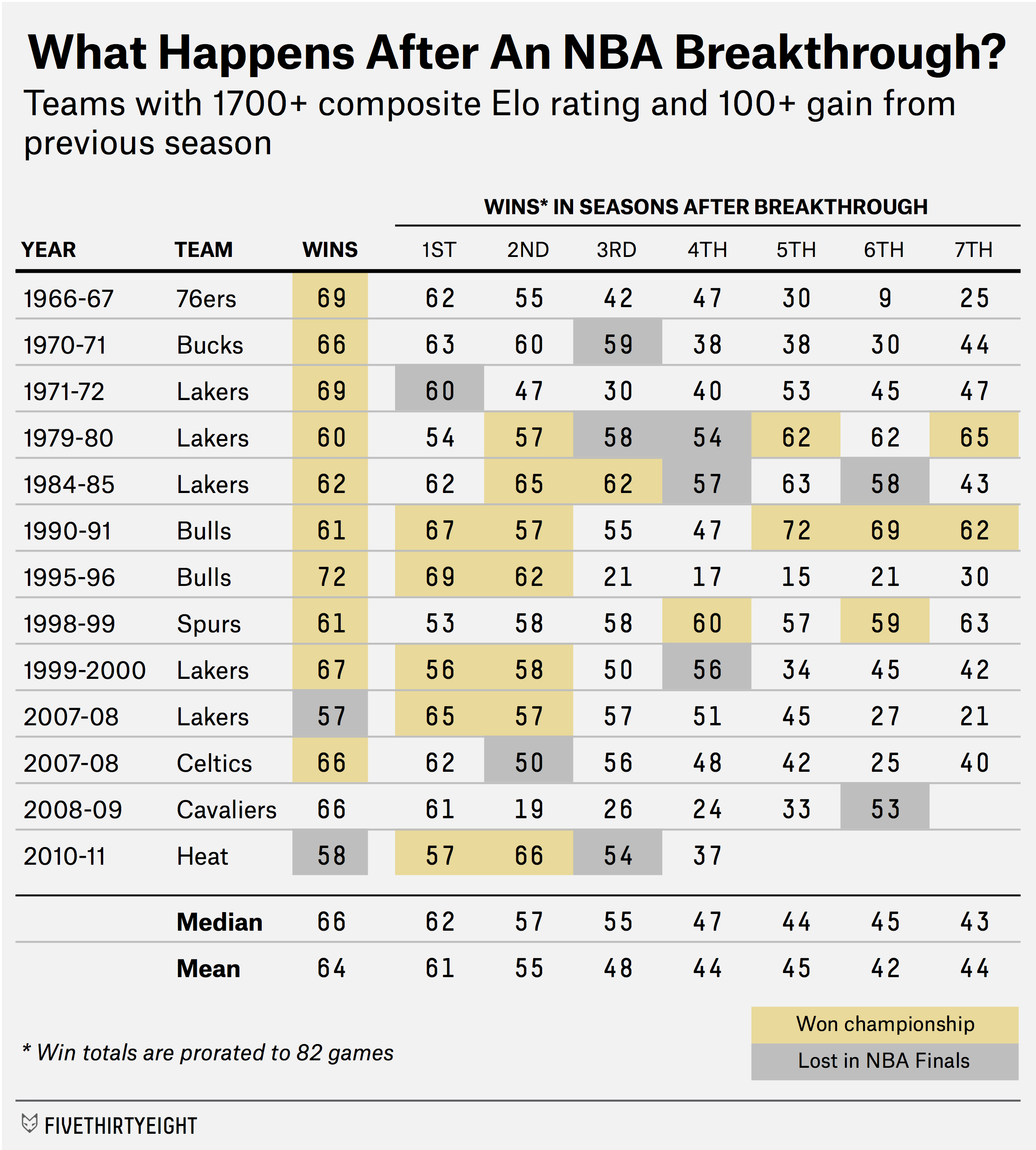 On average, these teams won 1.5 additional championships in the seven seasons after their breakthrough year.1 But the average, of course, conceals a lot of variation. Eight of the 13 teams won multiple additional titles, while the other five won no more.

The Warriors look pretty good even compared to this elite group of teams, however. Their Elo rating is the second-highest — after the 1995-96 Chicago Bulls — while their average team age, 26.4 weighted by win shares, is the second-youngest, behind the 1970-71 Milwaukee Bucks.

The Warriors have also gotten better “organically” with the same core group of talent. Their continuity percentage, which I calculate as the percentage of a team’s win shares that came from players who were also on the roster in the previous season, is 86 percent. Interestingly, going from good to great organically seems to be the more common path than doing it by signing a bunch of superstars. The 2007-08 Boston Celtics and the 2010-11 Miami Heat are the only real exceptions on the list above.

Based on a nearest neighbor analysis,2 the most similar team to this year’s Warriors is the 1990-91 Chicago Bulls. The Bulls’ three best players that year — Jordan, Scottie Pippen and Horace Grant — were 27 years old, 25 and 25. By comparison, Curry was 26 this season, while Klay Thompson and Draymond Green were 24.

That’s a fortuitous comparison, of course, since the Bulls’ 1991 championship was the first of six they’d win in eight seasons. The second-most similar team, however, is the 1970-71 Bucks. They had all the talent in the world — Oscar Robertson and Kareem Abdul-Jabbar (then Lew Alcindor3) on the same team! But after going 66-16 and romping their way to a title in 1971, the Bucks wouldn’t win one again. They ran into a 69-13 Lakers team in the 1972 playoffs and then were upset (by the Warriors) in the 1973 playoffs. They did reach the finals again in 1974 but lost to an underdog Celtics team. Robertson retired after that season, and Abdul-Jabbar left for Los Angeles a year later. And that was it.

At least the Bucks were highly competitive, though, averaging 61 wins in the three seasons after their breakthrough. If the Warriors fail to win another title, it’s likely to be because of a Bucks-like circumstance of running into some other really hot team in the playoffs or blowing a couple of playoff series that they ought to win — rather than (barring an injury to Curry) because of a sudden and dramatic collapse. Winning an NBA championship is never easy. But the Warriors are very good, very young and have many players locked up to long-term contracts. Teams in similar circumstances usually haven’t been one-year wonders and instead are able to make several more runs at a championship.