Hopefully if you’re reading this, you’ve had a chance to explore our new interactive graphic, “The Complete History Of The NBA,” which tracks each NBA and ABA franchise’s performance through every game of its history.

So now for the exciting part: 2,000 words about autocorrelation and the Akron Firestone Non-Skids.

Actually, this won’t be too bad because Elo is a pretty simple formula. The guts of the system are the same as we used for the NFL and which other researchers have applied to competitions ranging from chess to soccer. For those new to Elo, here are its essential features:

The long-term average Elo rating is 1500, although it can vary slightly in any particular year based on how recently the league has expanded (more about that below). More than 90 percent of team ratings are between 1300 (pretty awful) and 1700 (really good), but historically great or truly execrable teams can fall outside that range:

There are just a few NBA-specific parameters to set, which we’ll describe below.

Elo’s K-factor determines how quickly the rating reacts to new game results. It should be set so as to efficiently account for new data but not overreact to it. (In a more technical sense, the goal is to minimize autocorrelation.) If K is set too high, the ratings will jump around too much; if it’s set too low, Elo will take too long to recognize important changes in team quality.

We found the optimal K for the NBA to be 20. This is higher than we expected; it’s in the same range as the K used for NFL and international soccer Elo ratings even though the NBA plays far more games than those sports. It’s much higher than the optimal K for baseball. It implies that you ought to give relatively high weight to an NBA team’s recent performance.

One way to interpret this is that NBA data is subject to relatively little randomness. This makes it different from sports like baseball and hockey, whose game-by-game results are pretty noisy; in those sports, your default assumption should be that a winning or losing streak is mostly luck. That isn’t so true for basketball. Streaks may reflect true, if perhaps temporary, changes in team quality. When the Atlanta Hawks went on a 19-game winning streak this season, for instance, they were undoubtedly getting a little lucky, but they were probably tougher to beat than at other points in the season.

There are still some cases in which Elo seems too slow to catch up to reality, like when Michael Jordan left the Bulls or LeBron James left the Cavs. But remember: Elo is only looking at game scores and not the composition of the roster. If that’s all the information you have, setting Elo to react more quickly to these cases would make it overreact to others. The Oklahoma City Thunder’s Elo rating never dipped below 1508 this year despite its 3-12 start, for instance, and that proved to be prudent since the team went 42-25 the rest of the way and ended the year with an Elo rating of 1583.

Home-court advantage is set as equivalent to 100 Elo rating points. One hundred Elo points is equivalent to about 3.5 NBA points,1 so that’s like saying the home team would be favored by 3 or 4 points if the teams were otherwise evenly matched.

In practice, the magnitude of home-court advantage has waxed and waned over the NBA’s history. Home teams won by an average of 5.8 points in the 1987-88 regular season, for instance, but by just 2.4 points in the past season. And some teams (especially those like Denver and Utah that play at high altitudes) have historically had slightly larger home-court advantages.

Still, the spirit of the Elo system is to keep things simple. We experimented with a dynamic home-court advantage rating that changes over time, but we found that it made almost no difference to the overall ratings, partly because each NBA team plays about half its games at home and half on the road. So we’re using the constant 100-point home-court advantage instead.

Elo strikes a nice balance between ratings systems that account for margin of victory and those that don’t. While teams always gain Elo points after wins and lose Elo points after losses, they gain or lose more with larger margins of victory.

This works by assigning a multiplier to each game based on the final score and dividing it by a team’s projected margin of victory conditional upon having won the game. For instance, the Warriors’ 4-point margin over the Rockets in Game 1 of this year’s Western Conference finals was lower than Elo would expect for a Warriors win. So the Warriors gain Elo points, but not as many as if they’d won by a larger margin. The formula accounts for diminishing returns; going from a 5-point win to a 10-point win matters more than going from a 25-point win to a 30-point win. For the exact formula, see the footnotes.2

Instead of resetting each team’s rating when a new season begins, Elo carries over a portion of a team’s rating from one season to the next. In our NFL Elo ratings, teams retain two-thirds of their rating from the end of the previous season. In our NBA ratings, by contrast, they keep three-quarters of it. The higher fraction reflects the fact that NBA teams are more consistent from year to year than NFL squads.

Detail-oriented readers may see something that seems amiss here. Each team’s Elo rating is reverted to the mean, and — as we’ve said — the long-term mean Elo rating is 1500. So why does a slightly different number, 1505, appear in the formula?

The reason has to do with the way we handle expansion teams. In principle, the implementation of this is pretty simple. Each franchise begins with an Elo rating of 1300 in its inaugural professional season. The reason we revert to a mean of 1505 rather than 1500 is that there are liable to be a couple of relatively recent expansion teams in the league at any given time. Giving established teams a rating very slightly higher than 1500 counteracts the expansion teams and keeps the league average Elo close to 1500 over the long run.

But the league average Elo rating will be slightly different from 1500 in any given season, depending on how recently the league has expanded. It was 1504.5 during the 2014-15 NBA season, for instance, slightly higher than the long-term average because the NBA hasn’t expanded much recently.

The league average tended to fluctuate more in the early years of the NBA because of constant expansion, contraction and mergers with other leagues. (We’ve learned way more than we wanted to know about the early history of American professional basketball, like that you could have once watched a game between teams named the Indianapolis Kautskys and the Akron Firestone Non-Skids.) The league average reached a peak of 1534.5 in 1954-55 after a number of losing teams had disbanded. By contrast, it was just 1440.5 in the 1970-71 season after the NBA expanded rapidly. 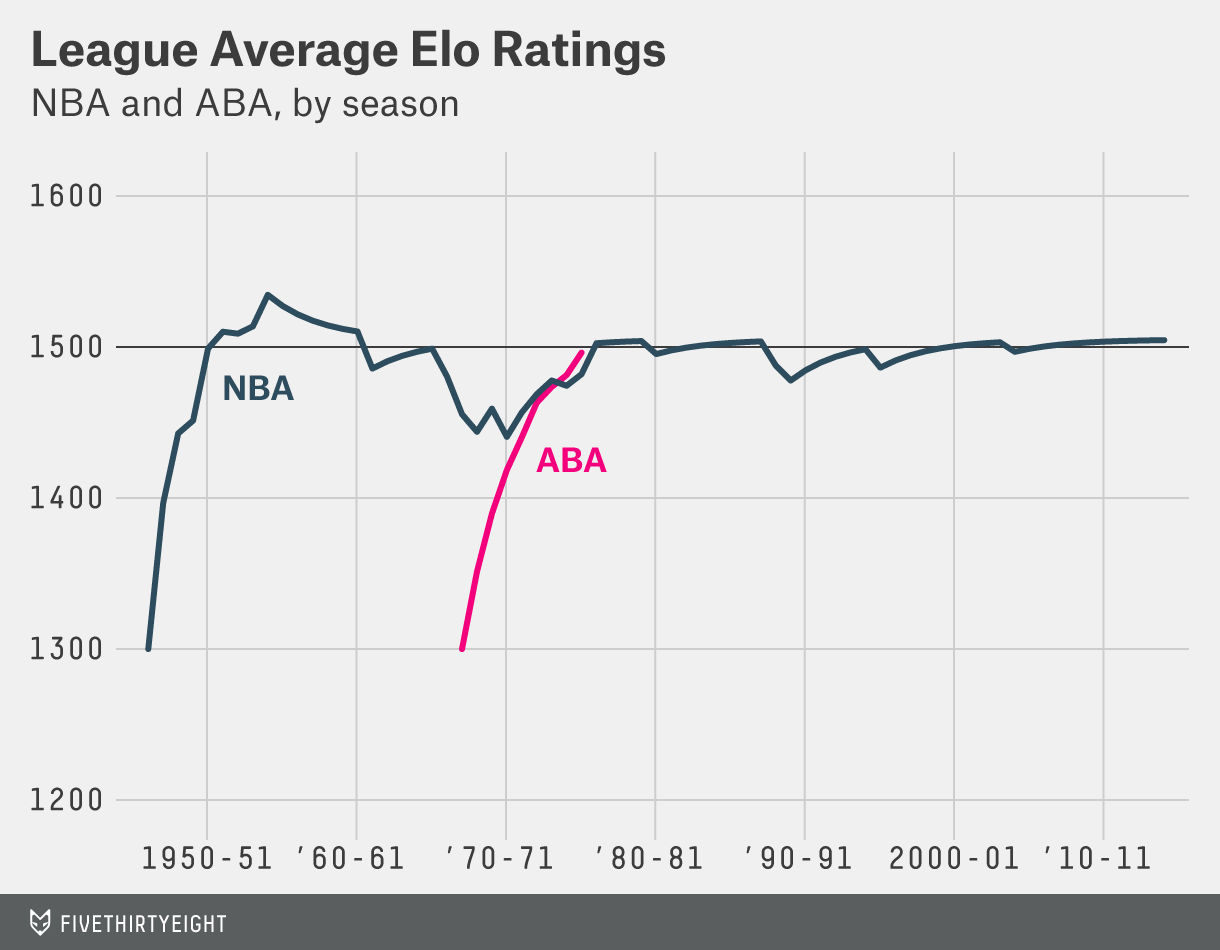 There’s one other tricky part. We said a team begins with a rating of 1300 in its first professional season. That doesn’t mean its first NBA season. Instead, teams get credit for their performance in predecessor leagues that merged with the NBA: 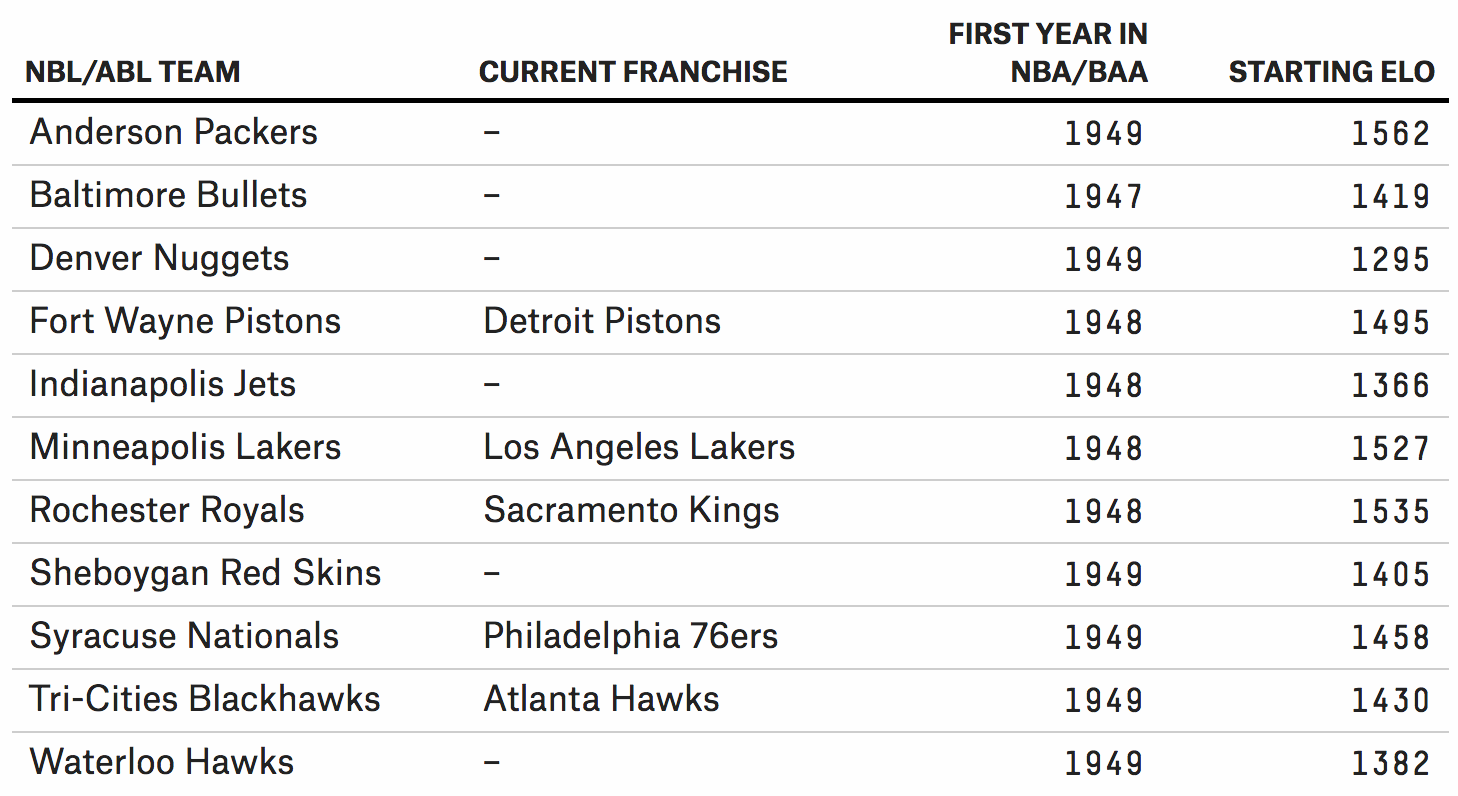