The NBA playoffs are finally upon us, and like the 16 teams vying for the Larry O’Brien trophy, we’ve come prepared — not with basketball skills, mind you,1 but with graphics and numbers. Using the latest (postseason-optimized) version of FiveThirtyEight’s NBA Power Ratings, we simulated the playoff bracket 10,000 times, counting how often each team won its first-round series (as well as tracking which teams won the NBA title most often). We also put together charts highlighting each team’s key players, along with their multiyear predictive Real Plus-Minus2 ratings, plus a comparison of both teams’ strengths and weaknesses according to the four factors of basketball. (Note that in some of our write-ups below, we use single-season RPM, so those numbers will be slightly different than the multiyear RPM we list in the charts.) So get settled in, maybe throw some chalk in the air, and enjoy the brutal, glorious two-month journey that is the road to the NBA championship. 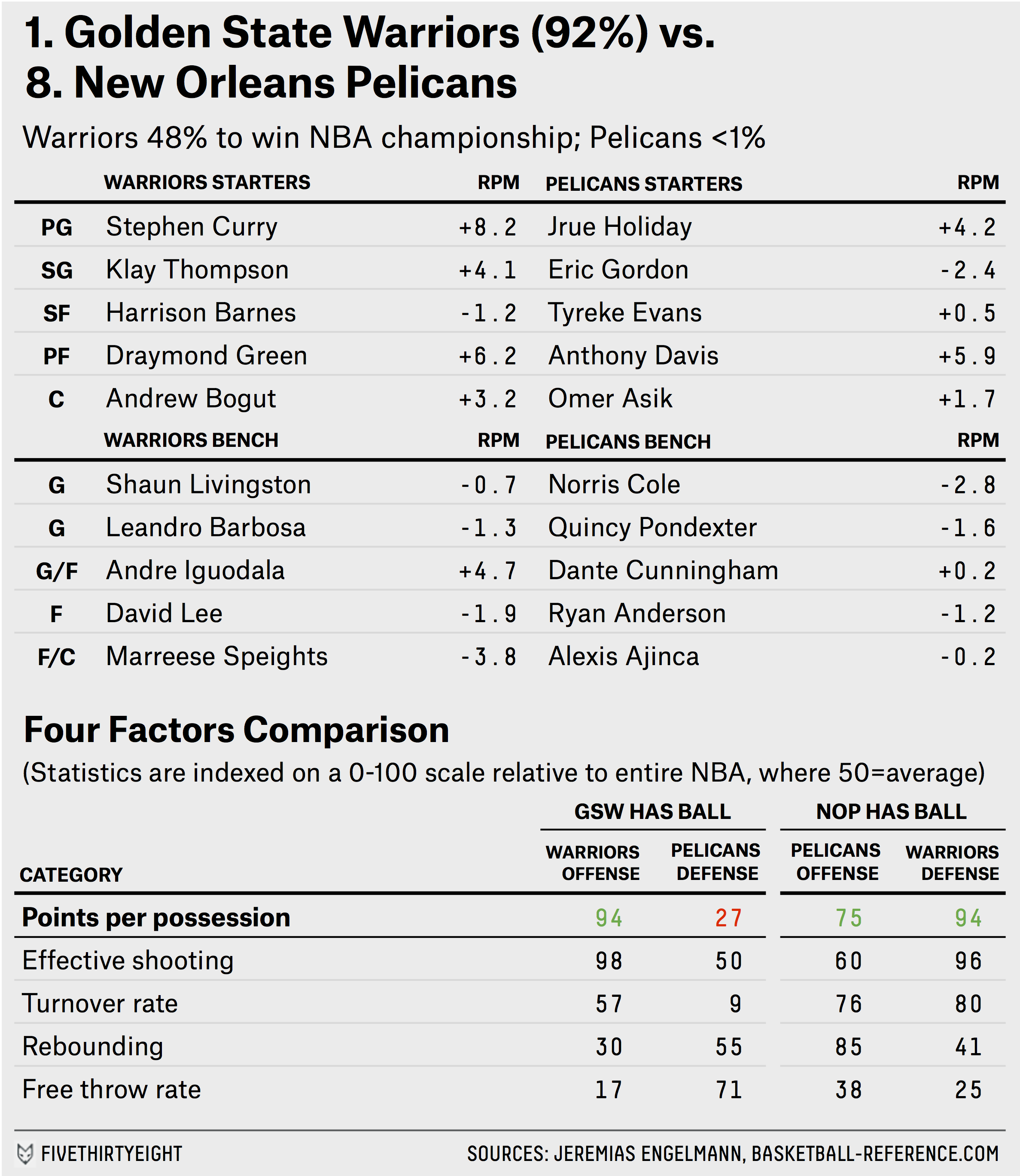 Each team is led by one of the best players in basketball: Stephen Curry on Golden State and Anthony Davis on New Orleans. So why do we think Golden State has a 92 percent chance to advance? Because Curry is better, and has much better teammates. Draymond Green, a top contender for Defensive Player of the Year, rates higher than Davis in the Real Plus-Minus player ratings we’re using from Jeremias Engelmann and Steve Ilardi. Warriors sub Andre Iguodala would be the second-best Pelican. But this might not be a sweep: In their two games against Golden State in New Orleans, the Pelicans won once and forced overtime in the other. But Golden State’s formidable offense should dominate the Pelicans’ subpar D. The Warriors look a lot more like a team for the ages — with an impressive 48 percent chance of winning it all — than like first-round upset fodder. (We were a little stunned by that 48 percent number, but Basketball-Reference.com gives the Warriors about the same odds.) — Carl Bialik 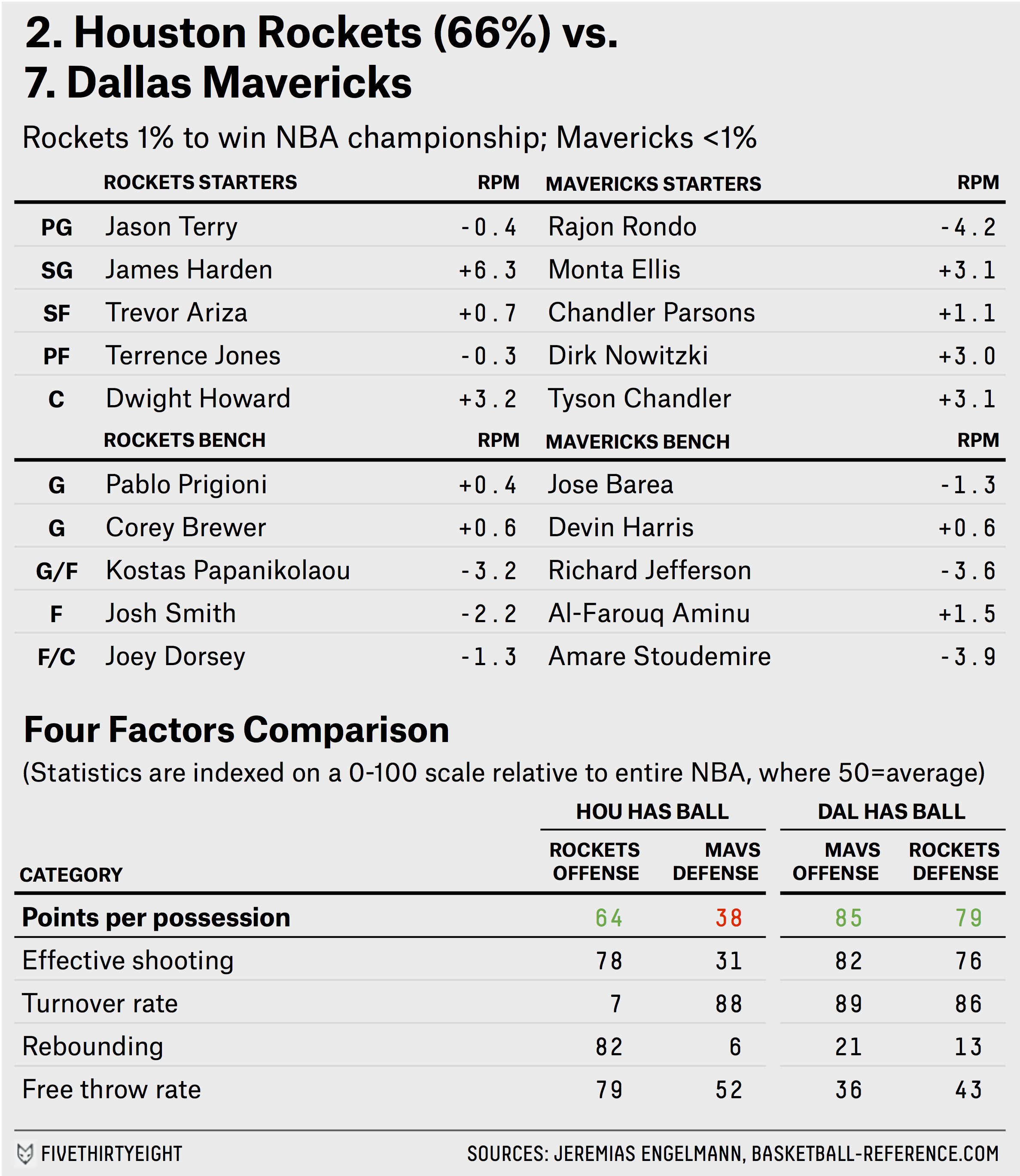 It’s current MVP contender versus aging MVP winner (but the current contender is the one with the beard). James Harden versus Dirk Nowitzki. The Beard led the league in WAR, according to ESPN’s Real Plus-Minus metrics. With Harden, Houston has the edge — a 66 percent chance of prevailing, according to FiveThirtyEight’s projections. Beyond Harden’s consistency, the Rockets have otherwise ridden the injury luck roller coaster. They enter the playoffs having lost two important starters: versatile big man Donatas Motiejunas and the feisty defender Patrick Beverley at the point. On the other hand, Dwight Howard has returned after missing half the season. The Rockets will need him to maintain their solid +3.2 defensive rating.

For the Mavs, it’s been a tale of two seasons. After surprising the league with a hot start, Dallas stagnated after the All-Star break, going 14-13. In FiveThirtyEight’s latest NBA Power Ratings, the Mavs rated as the worst of the Western Conference teams to make the playoffs — even behind the No. 8 seed New Orleans Pelicans. — Andrew Flowers 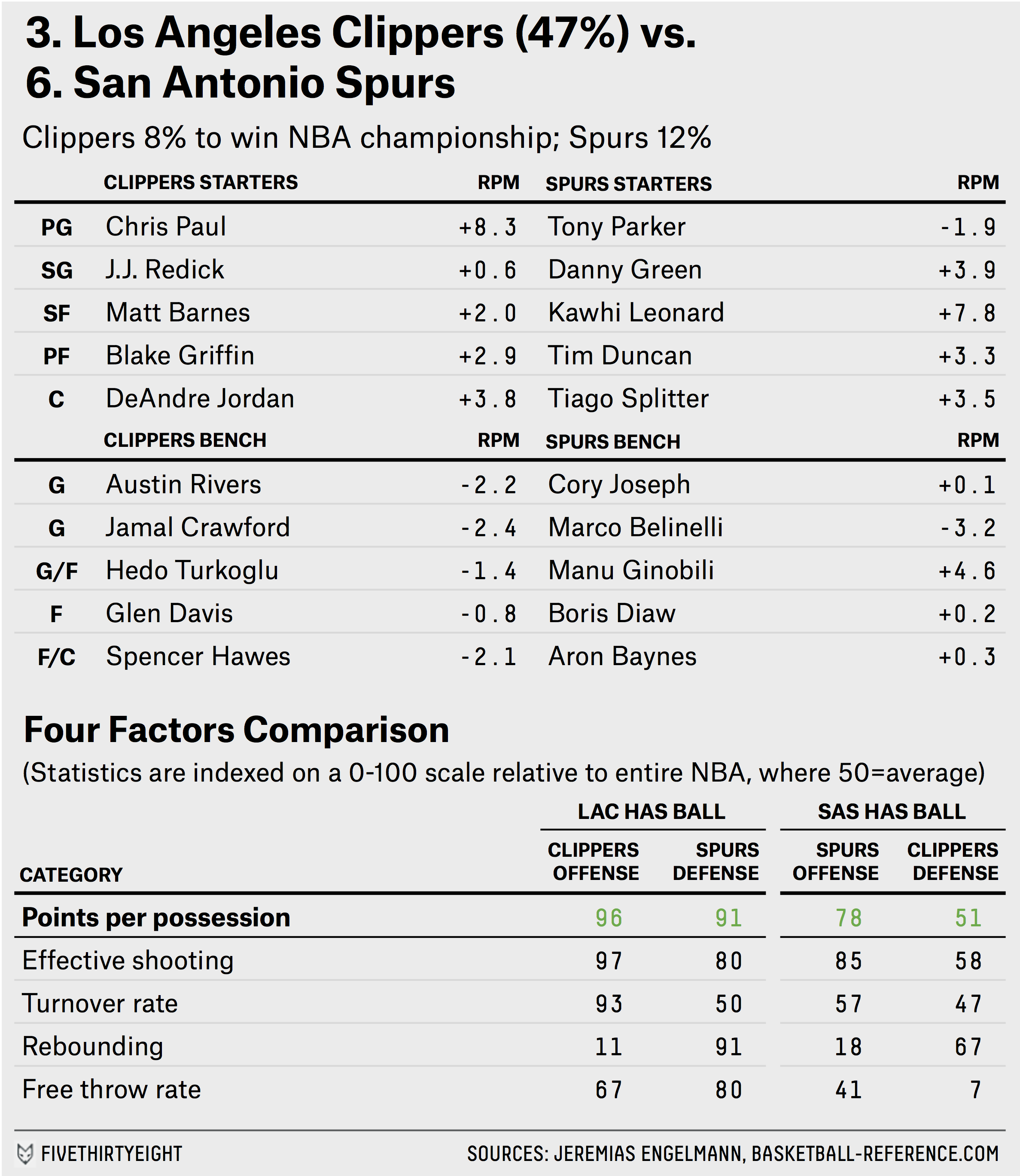 With the latest FiveThirtyEight Power Ratings ranking the Spurs and Clippers as second and fourth, respectively, this matchup is one of the most compelling first-round matchups in recent memory.

The defending champion Spurs enter this tournament as the No. 6 seed in the Western Conference — far lower than the No. 2 seed they could have had if they had won their final game against the Pelicans on Wednesday. Despite that loss, they had a 21-4 record over their last 25 games, reasserting that they’re contenders despite a 19-18 stretch in the middle of the season.

The story of their year has been the breakout of last year’s surprise finals MVP and zero-time All-Star Kawhi Leonard. The Spurs went 46-18 with him in the lineup, with an average margin of victory of 7.8 points per game — which would be second to Golden State’s 10.0 and matches the 7.8 they put up last year. Leonard’s 2014-15 Real Plus-Minus of 8.35 was second in basketball behind Stephen Curry’s, ahead of well-known small forward LeBron James’s. Oh, and he led the league in steals per game.

The Clippers are no slouches, either — their SRS3 of 6.8 is second-highest in the league behind Golden State’s 10.0 (San Antonio is third, with 6.34). They’ve now won either 56 or 57 games in every full season of the Chris Paul/Blake Griffin era, yet their dynamic duo has not made it past the conference semifinals.

Although the Clippers have home-court advantage, the FiveThirtyEight simulations give the Spurs the edge, with a 53 percent chance of advancing. In fact, despite being projected to play any Game 7 from here on out on the road, San Antonio has the third-best chance of winning the championship, at 12 percent. The model gives the Clippers the fourth-best chance, at 8 percent. — Benjamin Morris 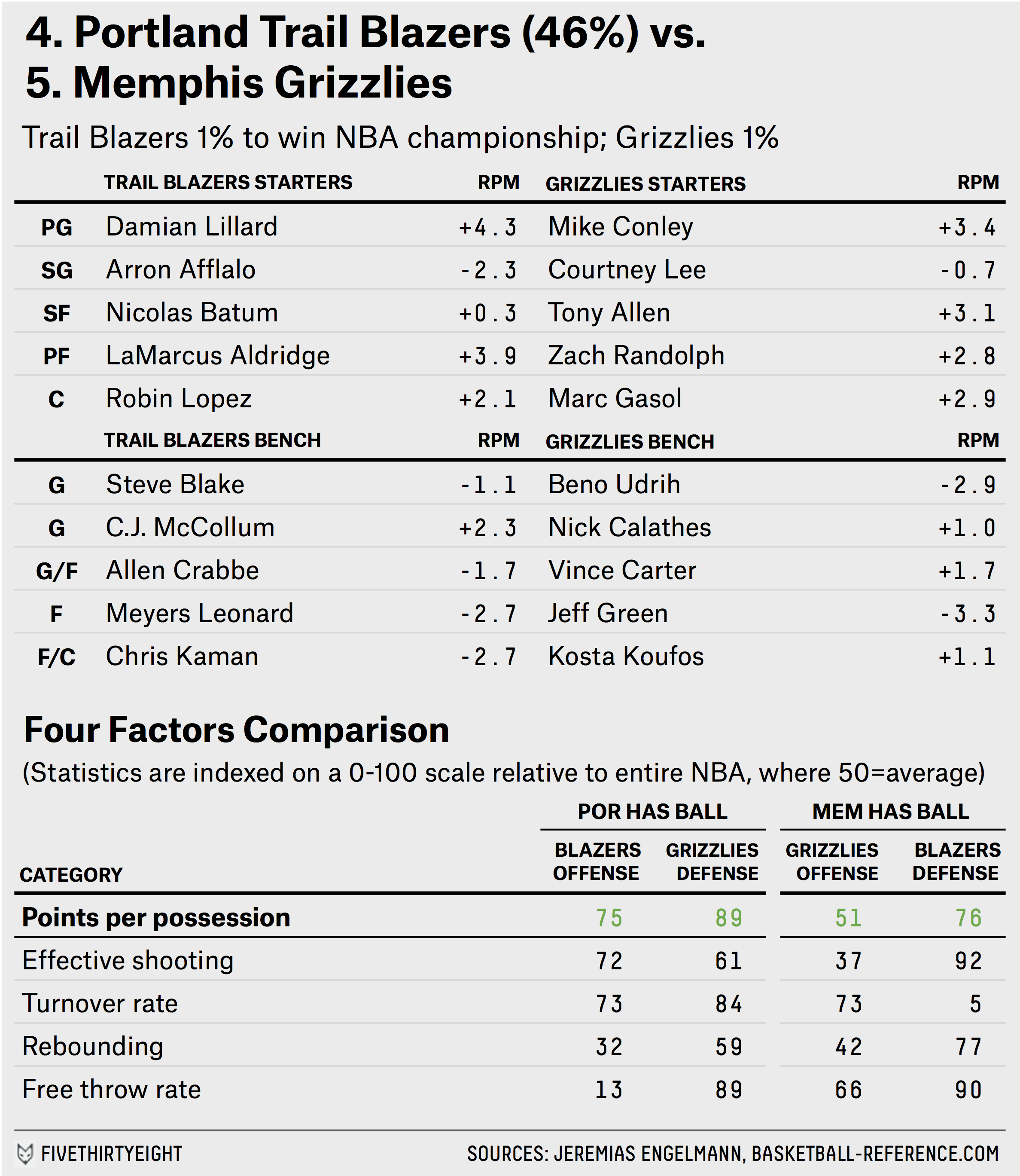 Portland won fewer games than Memphis (51 to 55) during the regular season, but because the Blazers won the comparatively weak Northwest division, they are the No. 4 seed in the Western Conference and the Grizzlies are the No. 5. But that seed advantage isn’t worth much. Since the Blazers had fewer wins, they will still be on the road for four of their seven potential games against Memphis. Making matters even more complicated, this series is so close that the question of home court could end up making all the difference. Only a tenth of a rating point separates them in our most recent power rankings. Our model gives the Grizzlies a 54 percent probability of winning, but that number would flip around to 53 percent for Portland if the Blazers had home court. Of course, the Grizzlies earned their home-court advantage by winning more games (against a tougher schedule, no less), and this arrangement is good for Portland, too — a 46 percent chance against Memphis is preferable to a 24 percent chance versus the Clippers, which is who they’d face if the conference were seeded purely by record. But this inverted 4-versus-5 matchup is another example of how convoluted and arbitrary the seeding process is in the NBA. And it’s another argument that the league should perhaps just ditch divisions (if not conferences) entirely. — Neil Paine 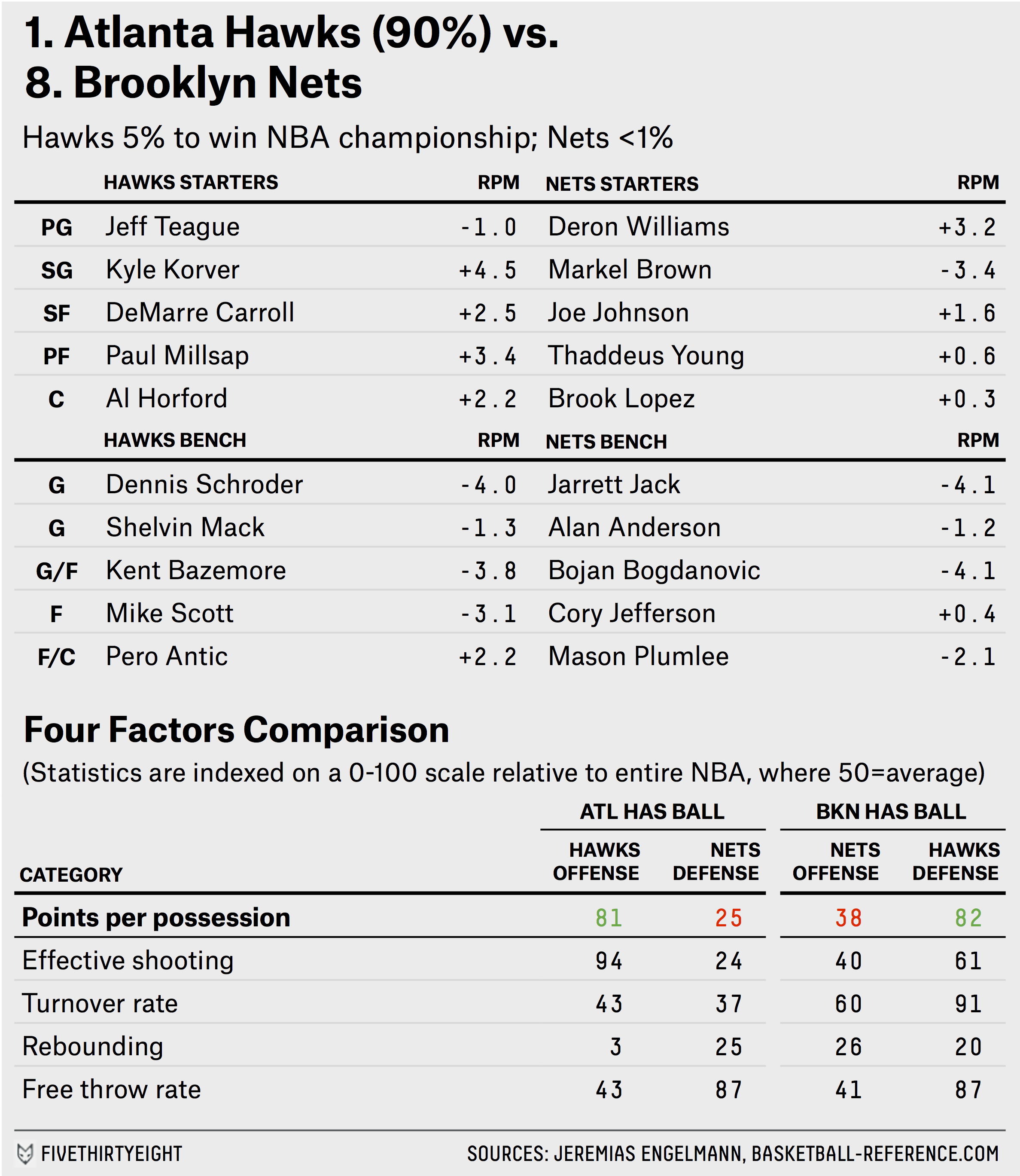 The Brooklyn Nets will not win the NBA championship. No, really: We ran 10,000 simulations of the playoffs, and the Nets were the only team to never win it all. They have only a 10 percent chance of moving on from their first-round series against the Atlanta Hawks. This is among the most lopsided matchups of the first round. The Nets, ranked No. 22 in FiveThirtyEight’s Power Ratings, are by far the worst team to make the postseason. With their 38-44 record and -2.9 point differential (the only playoff team in red), the Nets are lucky they’re in the Eastern Conference — further momentum for reform to the NBA’s postseason structure.

Atlanta is coming off a franchise-record 60-win regular season; this should be a cakewalk for the Hawks (even after losing defensive stalwart Thabo Sefolosha to injury after a run-in with the NYPD). Atlanta is well-balanced: +2.9 points per 100 possessions on offense and +2.0 on defense. The Nets have a pedestrian offense (+1.1) but are a disaster on defense: At -4.7, their defensive rating is the fifth-worst in the league. If the Nets avoid a sweep, it’ll be an achievement. — Andrew Flowers 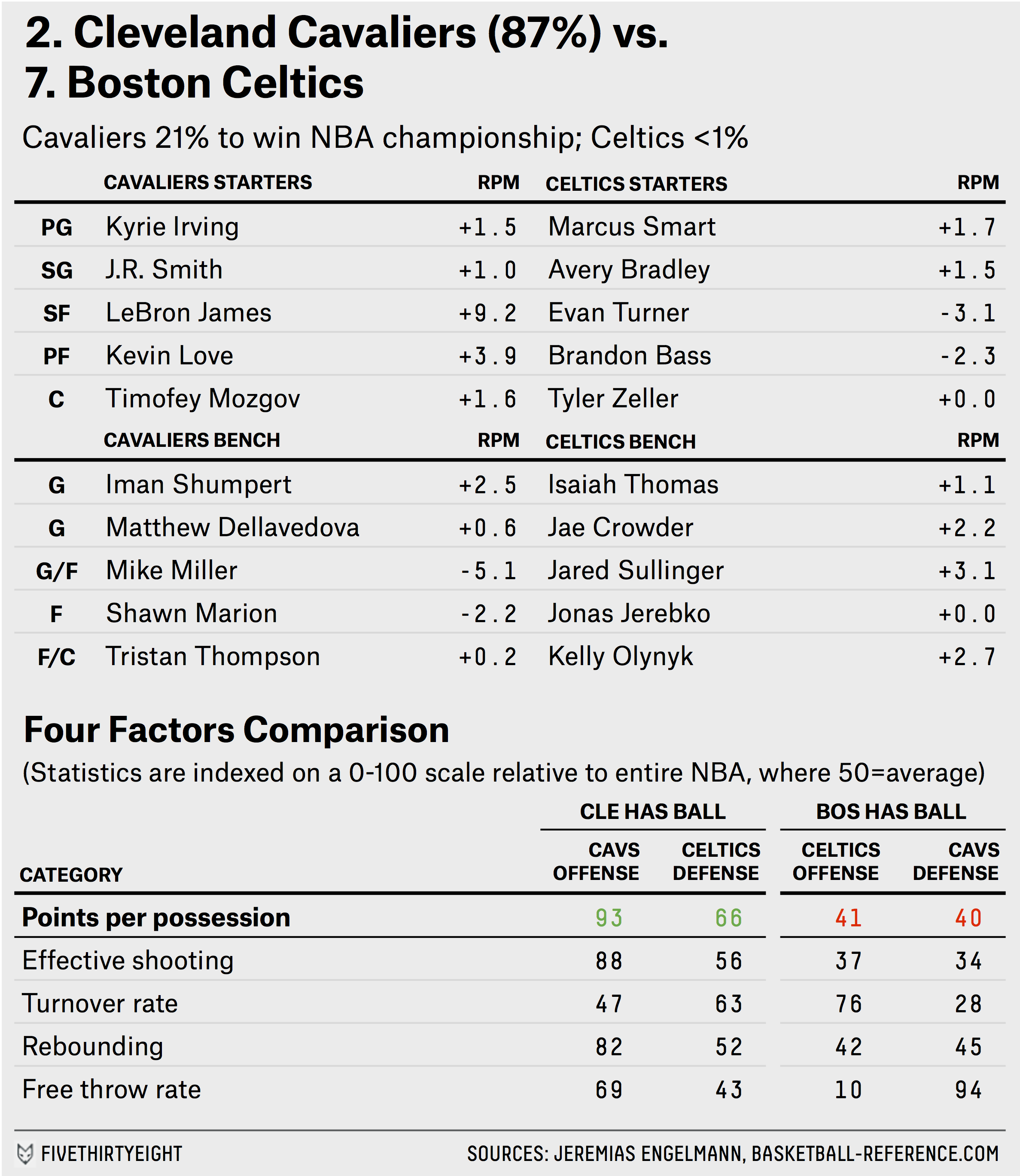 You might think the Celtics should just be happy to be here. After all, in late February, they only had a 12 percent probability of making the playoffs, according to the FiveThirtyEight NBA Power Ratings. But rather than merely showing up, getting their souvenir T-shirt and accepting a first-round loss, Boston could give LeBron James and the mighty Cavaliers more trouble than they bargained for. While we can’t derive much meaning from the Celtics’ combined 216-168 margin over Cleveland in their two April matchups — the Cavs were mostly resting their key players — Boston is solid at both ends of the floor, with a great group of guards and a lot of depth. Over the course of the entire season, they were better offensively (relative to the league) than the Cavs’ defense was, and that only includes a few months of Isaiah Thomas. Our model says the Celtics are still unlikely to pull the upset, but they have the ingredients to be much more of a pest than they seemed to be a few months ago. — Neil Paine 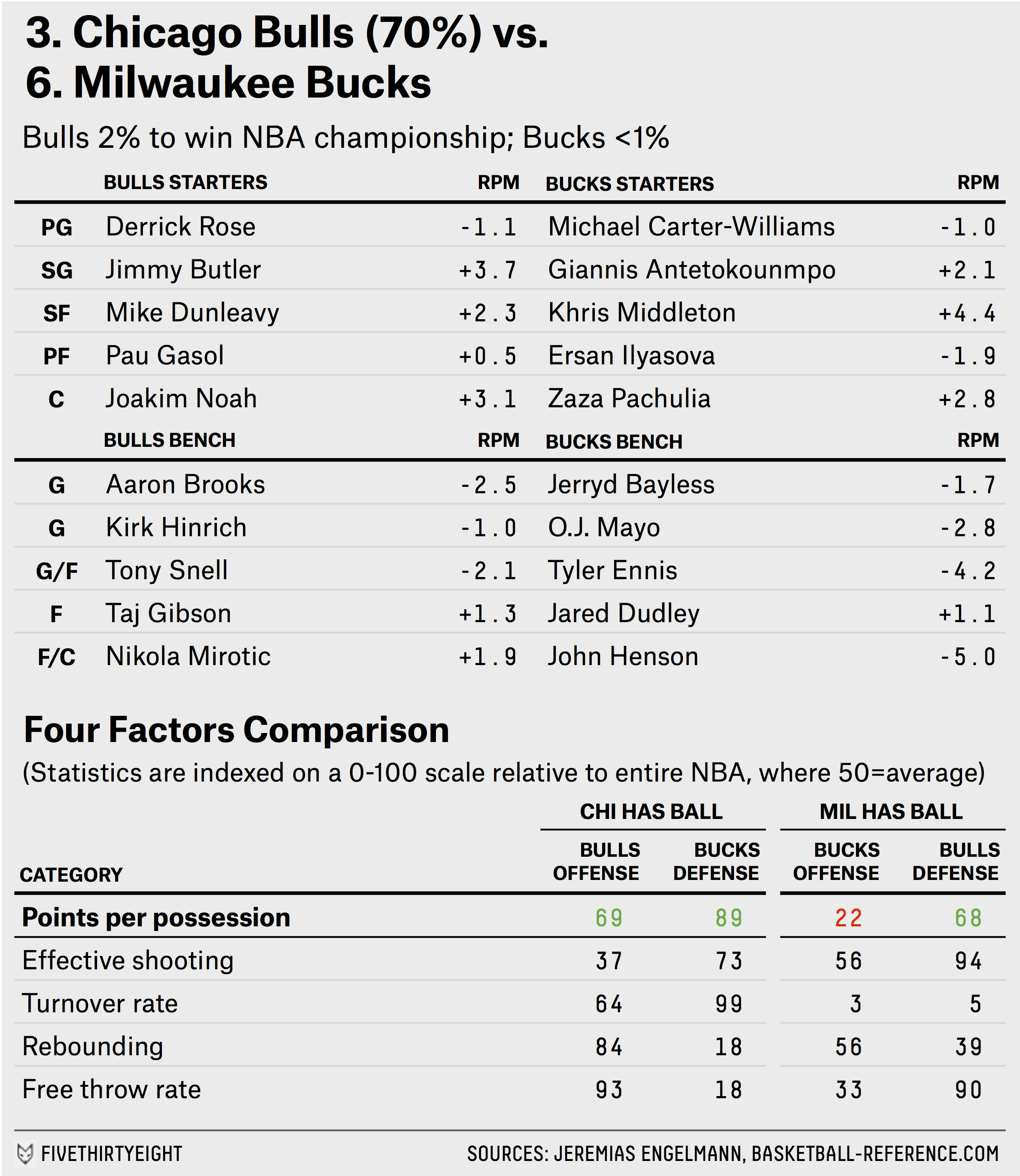 Derrick Rose is back in time for the playoffs. Unfortunately for the Bulls, he’s not the Derrick Rose of four seasons ago, the one who won the MVP award and led the Bulls to their only conference finals since Michael Jordan’s second retirement. Since then, Rose, slowed by injuries, has played just 100 regular-season games and one playoff game. Now he is the only Bulls starter who rates below league average. That’s not enough to make Milwaukee the favorite in this series. Two Bucks starters are below league average, and Milwaukee will have trouble scoring with an offense that is well below league average. The Bulls should win this series — and enjoy the win, because in half of our simulations of the playoffs, they go out in the next round, most likely to LeBron James and the Cavs. — Carl Bialik 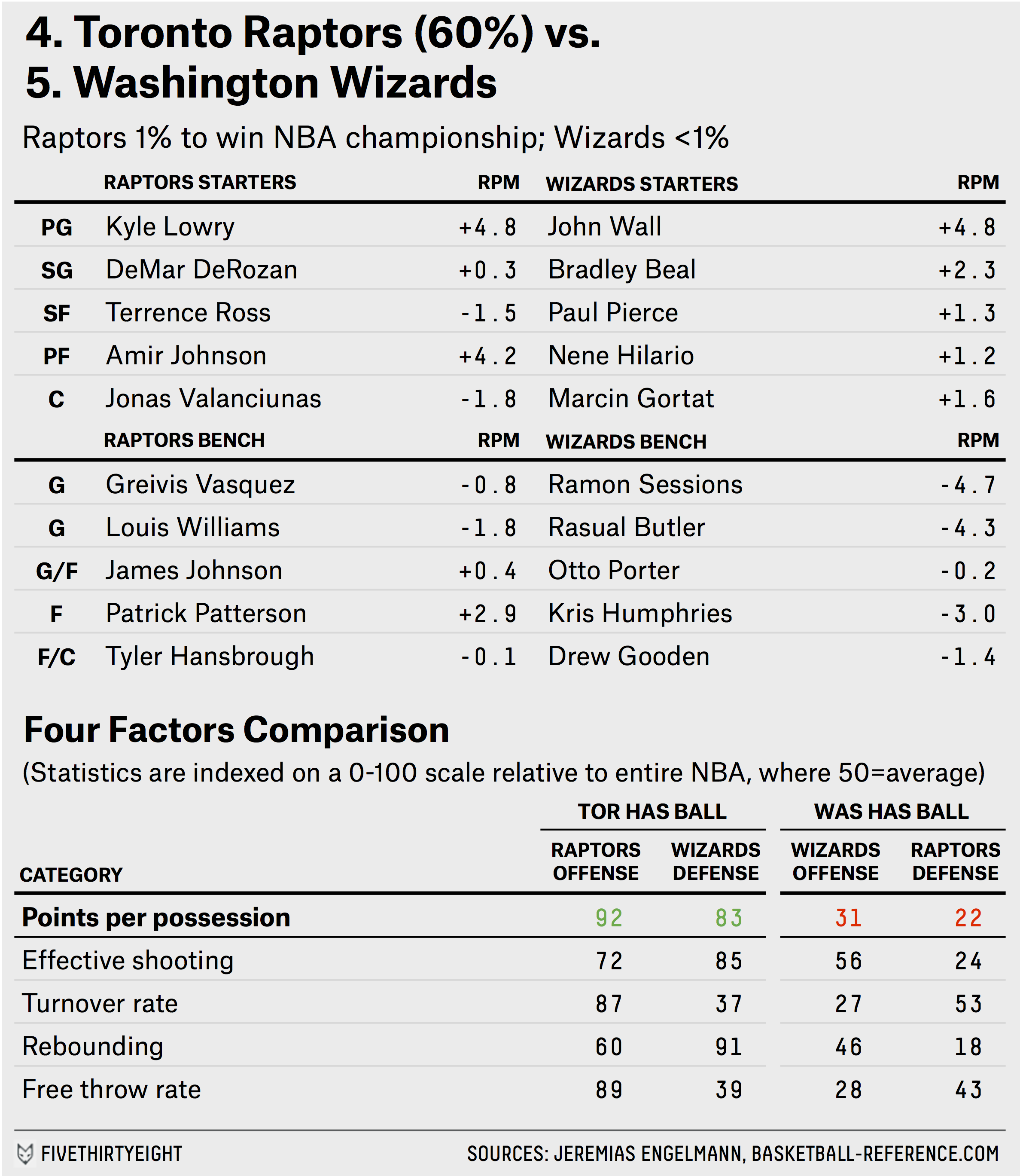 This series features two teams that started out the season looking like they might be the next big thing (at least in the Eastern Conference). The fourth-seeded Toronto Raptors began the season 7-1 and made it all the way to 24-7 before a four-game losing streak started their 25-26 finish — with their final record only a one-win improvement on last year. The Wizards started out 4-1 and made it to 19-6, but have been 27-30 since, ultimately improving on last season’s 44-win campaign by just two wins.

Both teams are led by All-Star point guards, Toronto’s Kyle Lowry and Washington’s John Wall, with Lowry making the All-Star team for the first time in the eighth year of his career (his third with the Raptors). ESPN’s Real Plus-Minus for this season ranks them as the fourth- and sixth-best point guards in 2015. Lowry performed a little worse than last year; his RPM dipped slightly from 4.3 to 4.1 and his WAR (wins above replacement) dipped from 11.6 to 9.4. But for Wall, 2014-15 was a big improvement on the year before: His 4.7 RPM and 12.1 WAR were both up from 2.2 and 8.3 last year, respectively.