Maybe God really does hate Cleveland. The Cleveland Cavaliers led for much of Game 1 of the finals against the Golden State Warriors and had a better than 70 percent shot at winning it when LeBron James put the Cavs up by four with 5:08 left to play. They lost anyway, and they lost their point guard, Kyrie Irving, in the process. Irving, who played brilliantly in Game 1, is now out for the season after fracturing his knee cap in overtime.

The Game 1 loss reduced the Cavs’ chances to 17 percent, according to Elo. But Elo is just accounting for the result of the game and not Irving’s injury. How much further might the injury hurt their chances?

There’s actually quite a bit of argument about just how good Irving is, with various statistical systems rating him as everything from a superstar to a merely slightly-above-average player. Rather than seeking to resolve that debate now, I’ll instead take a choose-your-own adventure approach.

Suppose, for instance, that you think losing Irving will hurt Cleveland by a net of 3 points per game, considering both his offensive and defensive contributions and his potential replacements. Three basketball points is equivalent to 84 Elo ratings points.1 So we can re-run the Elo forecasts with Cleveland’s rating 84 points lower than it was originally. That would reduce Cleveland’s chances of winning the series to just 7 percent, according to Elo. 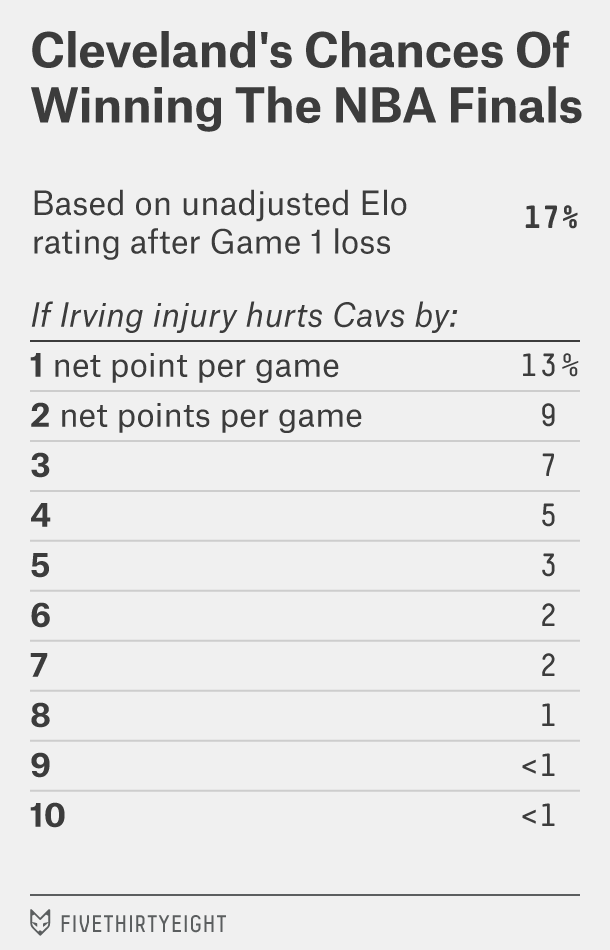 Or, if Irving’s absence hurts the Cavs by 5 points per game, their chances are just 3 percent. You can see the full rundown in the table to the left.

Seven percent is not nothing: amazing and unlikely things happen in sports, especially when a team has LeBron James on the roster. Still, if Cleveland can somehow win without Irving and after losing the first game, the championship could be up there in the curse-breaking pantheon with the Boston Red Sox overcoming a 3-0 A.L. Championship Series deficit against the New York Yankees in 2004.