Through the first three games of the NBA Finals, the storylines were intricate and rich:

The Warriors are really, really good. You have a shot at beating them if their shooting goes ice-cold. Otherwise, it’s next to impossible. 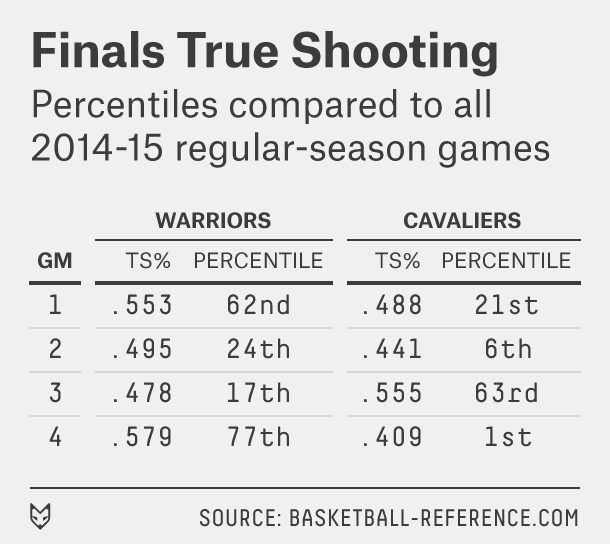 Let’s review the series from the standpoint of true shooting percentage (TS%), a relatively simple stat that gives appropriate credit for 3-pointers and free throws along with 2-point shooting attempts. Golden State led the NBA with a .571 TS% during the regular season, while Cleveland (.557) ranked fourth. The adjacent table lists each team’s TS% in each finals game so far, along with its percentile rank as compared to all NBA games during the 2014-15 regular season.

Game 4 was the first time we’ve seen the Warriors shoot like they typically did during the regular season. Their .579 TS% was close to their regular-season average, and — since an average Golden State performance is so good — ranks in the 77th percentile as compared to all NBA games.

But the Warriors’ defense has also been very good. It held Cleveland to a .409 TS% in Game 4, which ranks in just the 1st percentile. And it kept the Cavaliers to a .441 TS%, in the 6th percentile, in Game 2 on Sunday night.

Wait — didn’t the Cavs win Game 2? They did (in overtime). The team with the higher TS% wins about 85 percent of the time2 — this was one of the exceptions. Cleveland was able to take seven more field-goal attempts and 15 more free-throw attempts than the Warriors as a result of rebounding, turnovers and fouls. You can win as the slightly less efficient team when there’s a big differential in those categories.

Still, Cleveland wouldn’t have won Game 2 had Golden State shot a little better. If the Warriors had hit shots at the NBA average TS% of .535 (never mind that the team’s TS% is typically way better than that), they’d have scored an additional eight points and won 101-95.

And that’s the thing: The Warriors don’t have to shoot the lights out to win. If they shoot as well as the average NBA team, they’re very likely to win also.

In the next chart, I’ve tracked each team’s record based on its TS% during the regular season. I divide games into three categories, which include about a third of regular-season games each: 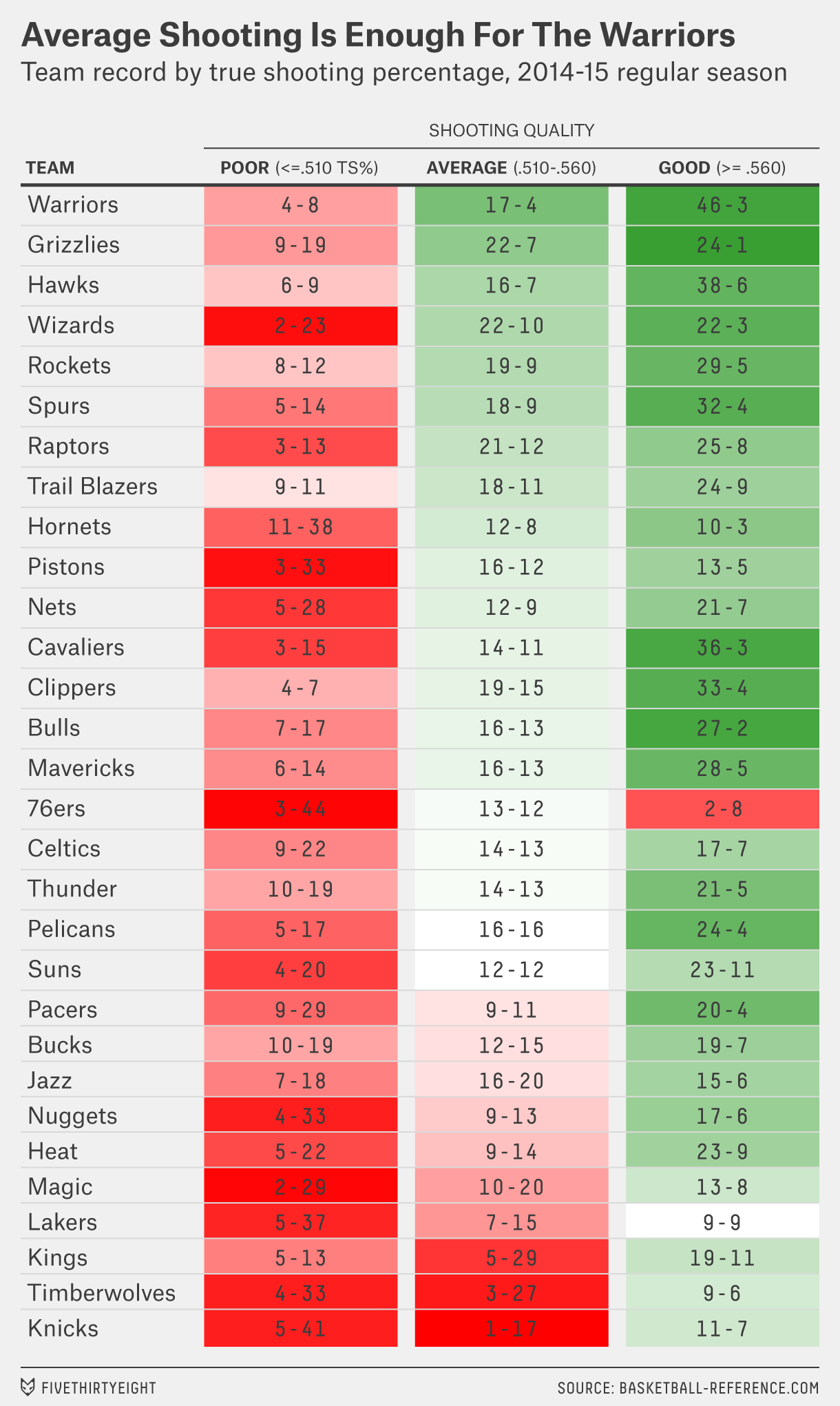 The Warriors were 17-4 during the regular season with average shooting. That equals a .810 winning percentage — tops in the the NBA — or the equivalent of a 66-16 record over an 82-game schedule.

The reason for the Warriors’ strong record with average shooting is simple: They also play great defense. It gets overlooked because they play at a frenetic pace, but the Dubs held opponents to a .514 TS% during the regular season, the third-best figure in the league after Chicago and Portland.

It can get even worse for opponents, and it often does: The Warriors went 46-3 with good shooting during the regular season. But “pretty good” shooting — average shooting, even — is usually plenty good enough for the Warriors. They’ll need to throw up a lot of bricks the rest of the way. Otherwise, James — as brilliant as he’s been — may become the first finals MVP in a losing cause since Jerry West in 1969.