No matter how the NBA Finals plays out, by the end of this season fully half of the 16 finals since the breakup of the second three-peat Chicago Bulls in 1998 will have been won by the San Antonio Spurs or the Miami Heat. When these teams met in the 2013 finals, it marked the first time since the 1980s that both teams had multiple championships in their recent history. This year, both teams feature multiple players — Tim Duncan, Manu Ginobili and Tony Parker for the Spurs; Dwyane Wade and Udonis Haslem for the Heat — with at least three rings (all from their present teams).

How does this stack up with other finals in NBA history? Very well. Counting total rings owned by players on both squads when entering their series, this is the second-blingiest matchup in the post-merger era (counting championships back to 1963, 10-ring minimum): 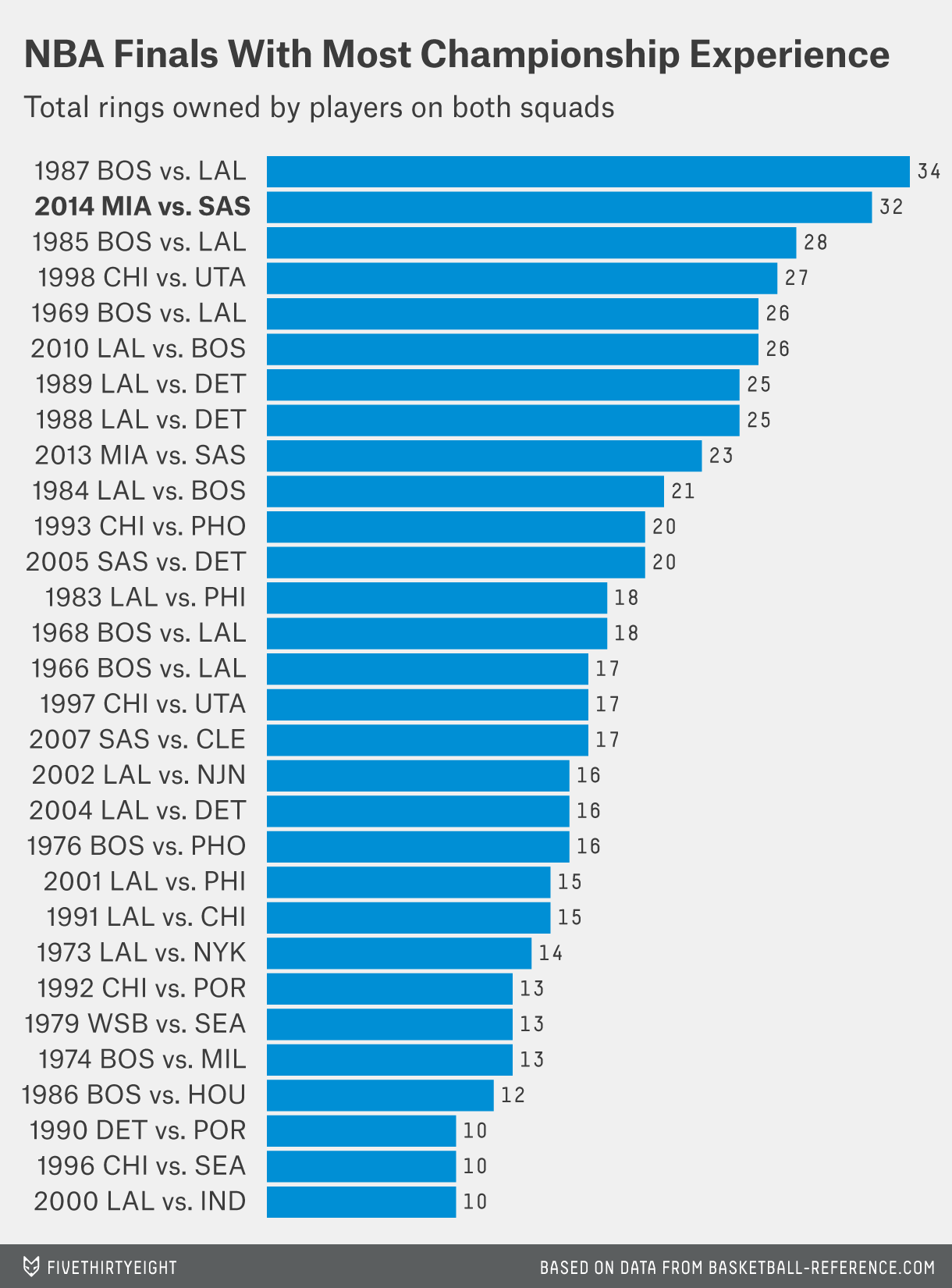 Amazingly, the Spurs are the team with less championship pedigree in this matchup. The Heat have 11 players with championship-winning experience (unsurprising for the defending champs). But though the Spurs’ Big Three (Duncan, Parker, Ginobili) have more rings (10) than the seven held by the Heat’s Big Three (Wade, LeBron James and Chris Bosh), no other Spurs were around for their last title in 2007, and none has won a championship with another team. This 12-ring difference is large historically, and teams with such a disparity don’t have a good record: 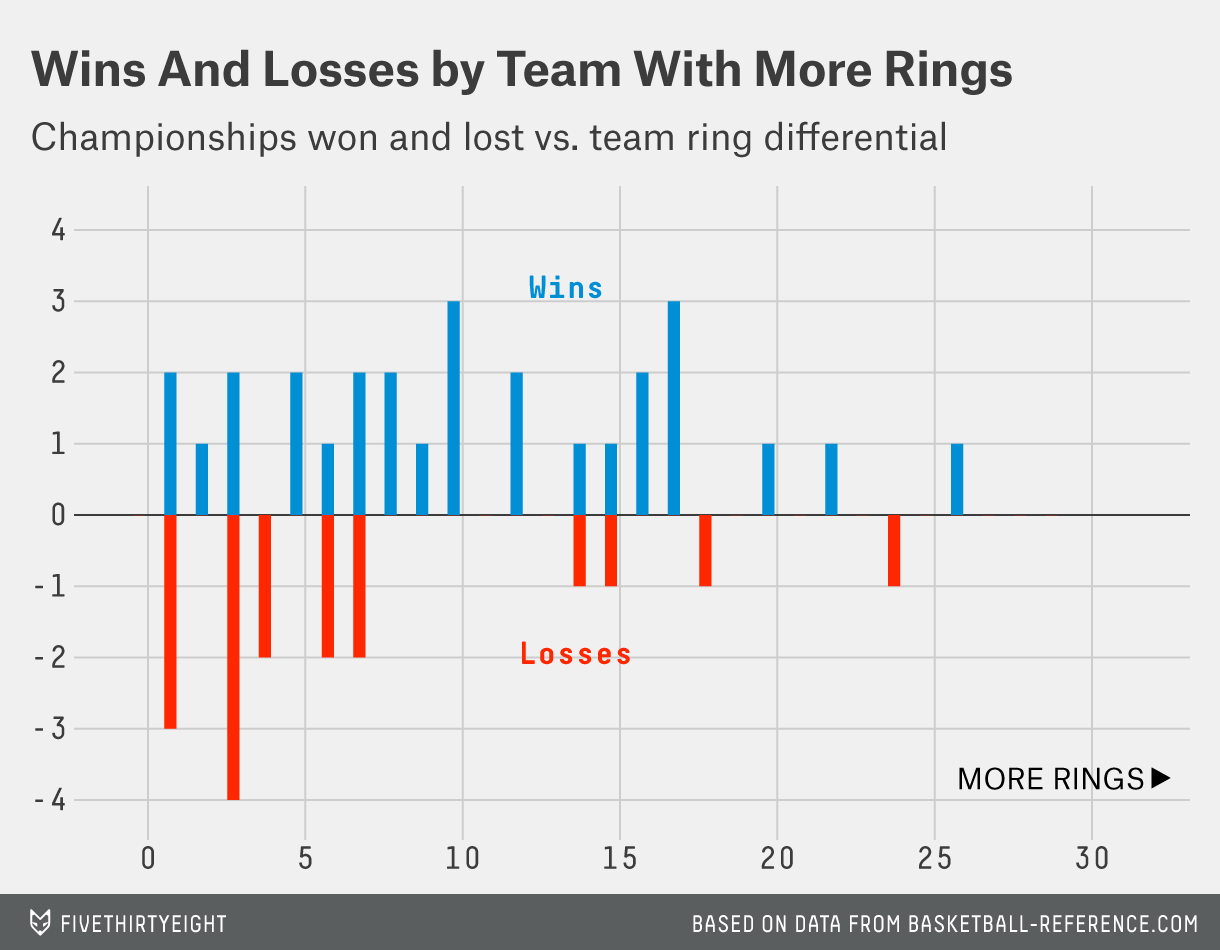 Teams with an eight-or-more ring advantage are 18-4 in finals series, though a lot of those were mismatches between a dynasty and a flavor of the month. But the Spurs this year are the better team on paper, with both the better record (62 wins in the regular season vs. Miami’s 54) and the better statistics (Spurs SRS was 8.0 vs. Miami’s 4.15). Additionally, the Spurs have a lot more rings than most ring underdogs. This year’s squad ties last year’s for the third-most rings ever owned by the less pedigreed team entering a finals: 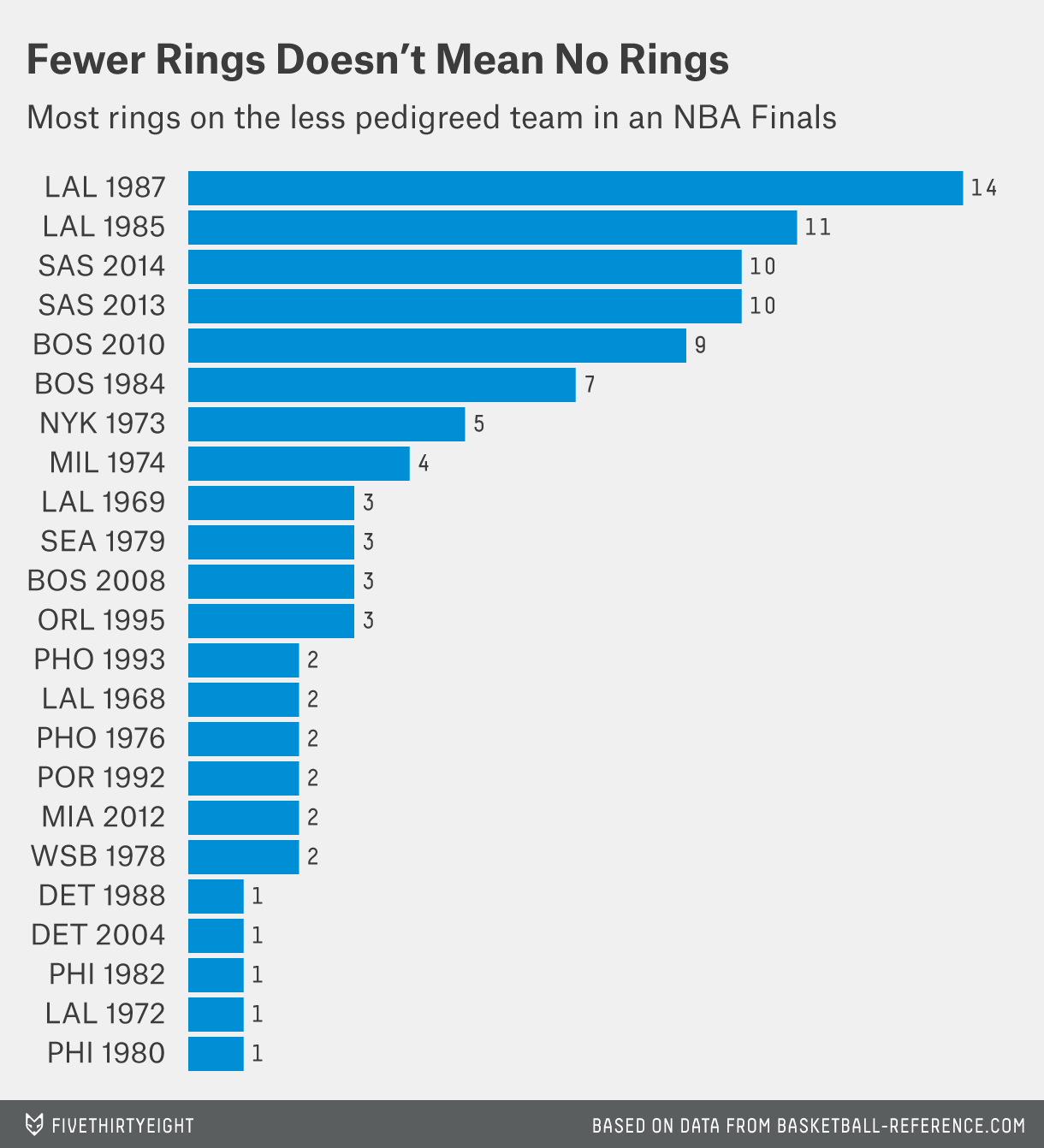 For a team with multiple championships to be the least decorated going into a finals is extremely rare. The Lakers in the 1987 Los Angeles/Boston matchup tops the list; the Lakers had 14 rings, fewer than the Celtics’ 20. That matchup had an interesting combination of NBA greats in their primes combined with NBA greats past their primes: 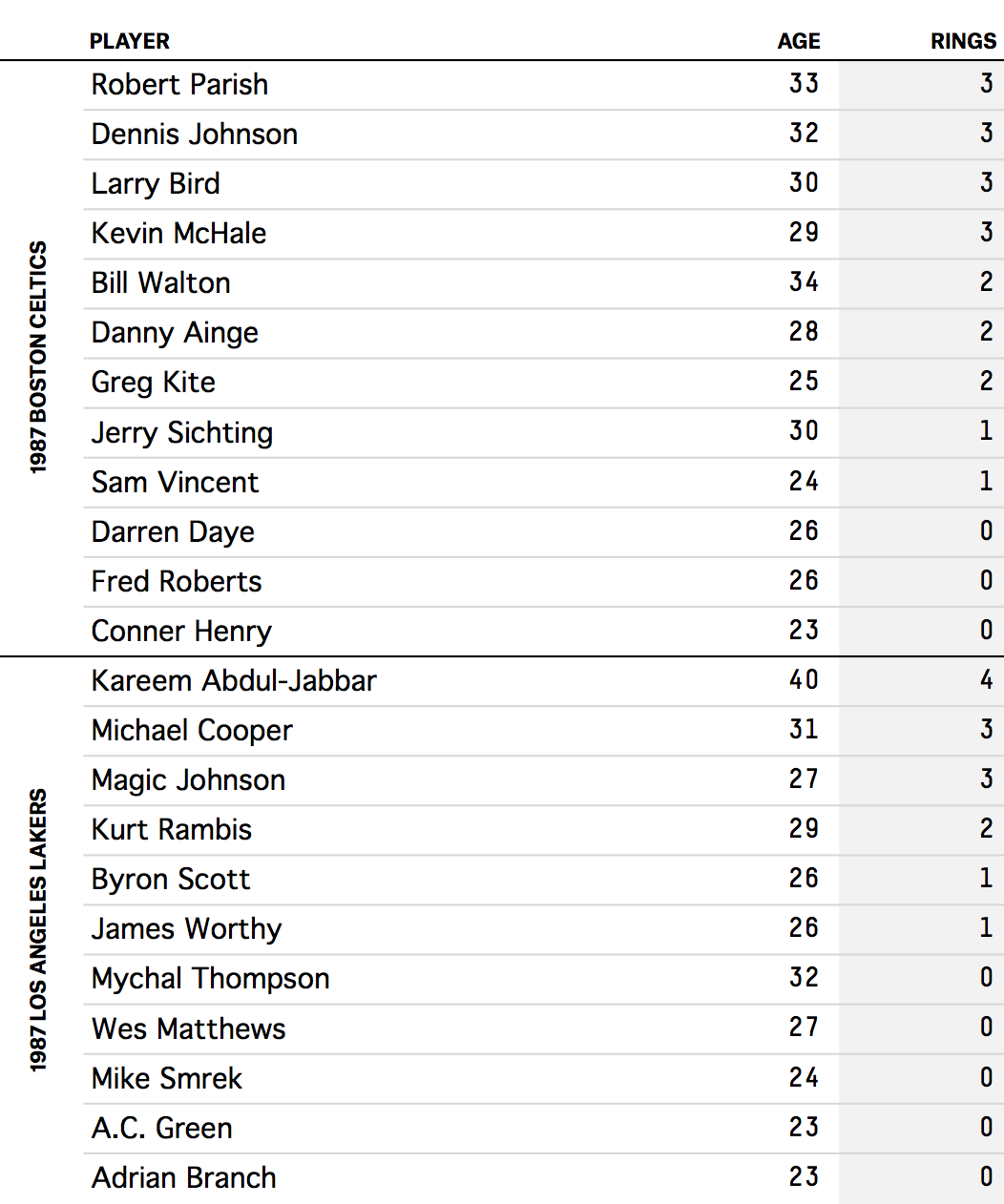 Kareem Abdul-Jabbar seemed to be an ageless wonder and averaged nearly 22 points per game in the 1987 finals. But Bill Walton — in his final NBA season — played only 24 minutes in five games against the Lakers (after having played in only 10 games the entire regular season). Without his two rings, even that stacked finals would only be tied with this year’s. And if these two teams meet again next year, they will surely break the record.

UPDATE (June 5, 6:48 p.m.): I only counted the rings of players who were on their teams’ active rosters in the NBA Finals. There are players such as Matt Bonner, who received a ring with the Spurs in 2007 but wasn’t on the Spurs’ finals roster. Bonner and his ilk aren’t included.

(June 5, 8:28 p.m.): The first chart in this article originally omitted the 2005 series between the San Antonio Spurs and Detroit Pistons but has since been updated.