Through the first three games of the NBA Finals, the Cleveland Cavaliers have slowed down the Golden State Warriors’ offense to an extent that few teams have been capable of this year. The Warriors have been held to an offensive rating of 101.5 points per 100 possessions — a whopping 10.4 points below their regular-season average. And during Games 2 and 3 of the finals in particular, Golden State was limited to offensive ratings that both rank in the bottom 15 percent of its game-by-game output this season. Reigning MVP Stephen Curry has mostly been neutralized,1 and aside from Klay Thompson and Andre Iguodala, his teammates — so superior on paper before the series began — have struggled to pick up the slack.

In short, it’s been a masterful defensive performance by Cleveland. Indeed, since 1985, only the 1998 Chicago Bulls in their matchup with the Utah Jazz have done a better job holding an opponent below offensive expectations2 through the opening three games of an NBA Finals. But how much of it can we expect to hold up as the series goes on?

To answer that, I looked at every best-of-seven NBA playoff series from the past 30 years, tracking how much a team’s defense defied expectations through the first three games and how much of that carried over into the remainder of the series: 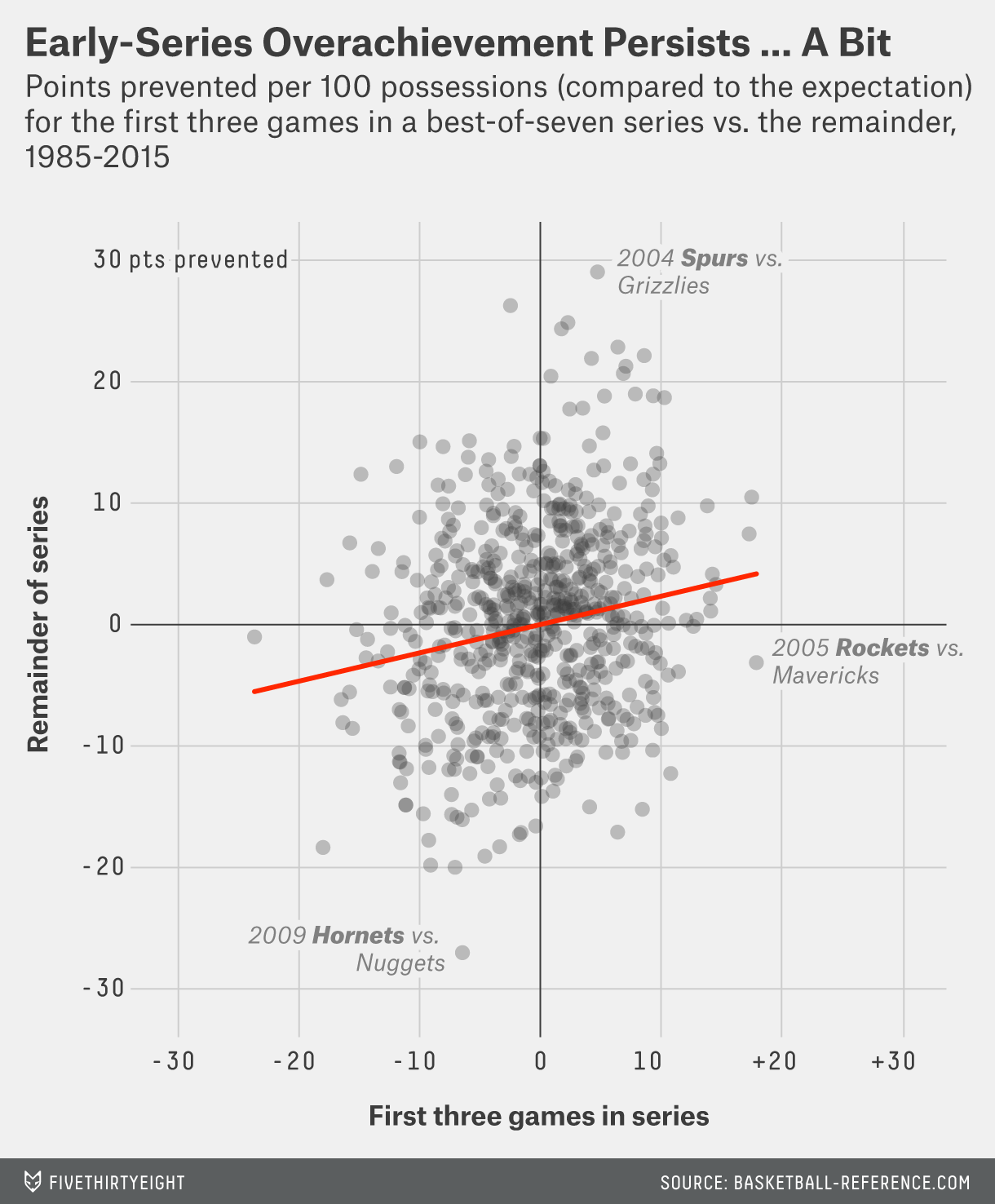 Twenty-three percent doesn’t sound like a lot, and this may speak a bit to what seems like one of the central debates of these finals so far — how much of Golden State’s struggles can be attributed to Cleveland’s defensive skill versus merely a run of bad shooting luck by the Warriors. History tells us that a team’s defensive performance over expectations through the first three games of a series is more than three-quarters ephemeral.

But 23 percent of 12.5 points is nothing to sneeze at. Suppressing the Warriors’ offense by 2.9 points per 100 possessions brings them much closer to the NBA pack at that end. And while the Warriors have also done well defensively against Cleveland in the finals,4 the overall effect of a 23 percent carry-over from Games 1-3 would reduce Golden State’s chances of winning the finals by about 8 percentage points.

Given the current circumstances of the series (Cleveland leads 2-1, with the remaining home games split evenly if the series goes to seven), that adjustment could be the difference between being favored to win the NBA championship and not. While our power ratings suggest that the Irving-less Cavs have a mere 40 percent chance of winning from here out despite the 2-1 edge, an 8-point tweak to those odds would make the series a virtual coin flip. And, perhaps not coincidentally, that’s essentially how Vegas currently views the finals.

CORRECTION (June 12, 10:06 a.m.): A previous version of this article misstated the team with the best defensive performance compared to expectations in the NBA Finals since 1985. It was the Chicago Bulls in 1998, not the Utah Jazz.