“You’ll shoot your eye out,” I kept thinking while watching Game 2 of the NBA Finals on Sunday. The Warriors hoisted 35 3-point attempts and made only eight of them en route to scoring just 93 points. It was a maddening, sloppy game full of what-ifs. So … what if the Warriors had sunk threes at their normal accuracy rate?1 They would have won 111-95.

Were the Warriors just unlucky? Their opponents, the Cleveland Cavaliers, were not a particularly good defensive team during the regular season, either overall or against perimeter shooters, although they may be better with Iman Shumpert and Matthew Dellavedova and Tristan Thompson getting more minutes because of injuries. The Cavs forced the Warriors into some bad possessions, but the Dubs also missed on some good looks, shooting just 2-for-11 on corner threes.

But there’s also the old adage: Live by the three, die by the three. If your shooters are going to get crazy hot on some nights, isn’t it inevitable that they’ll shoot a bunch of bricks on another, rendering a team’s offense more inconsistent and making it more upset-prone?

Let’s look at some data from the 2014-15 regular season. In the chart below, I’ve sorted teams by the percentage of their field goals that were taken from 3-point range. Then I’ve looked at their game-by-game scoring, calculating their scoring range (as I’ll describe it throughout this article) as the span including the middle 80 percent of their games (that is, throwing out their top 10 percent and bottom 10 percent of performances). 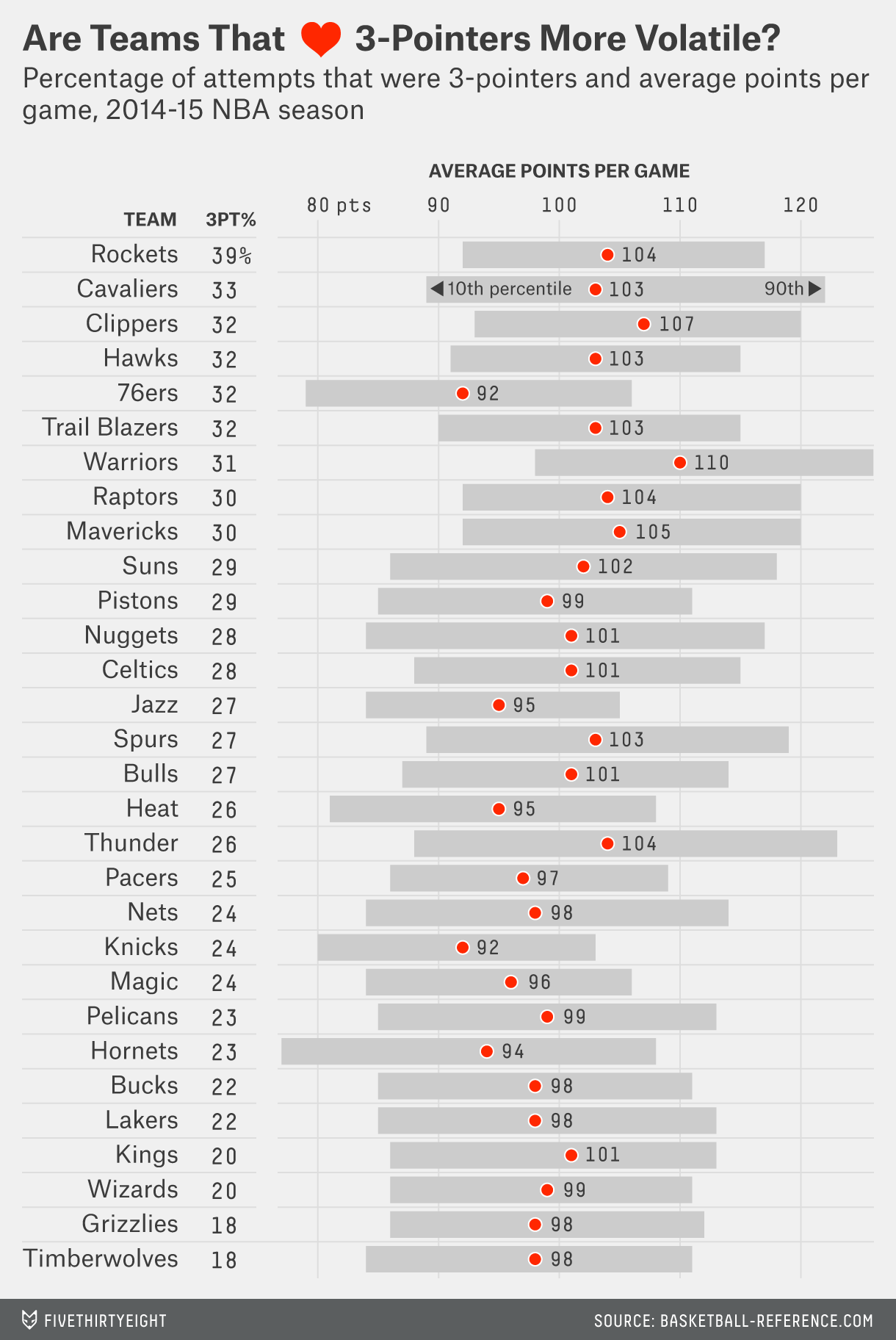 The Warriors, for instance, averaged 110 points per game in the regular season, while their scoring range ran from 98 points (at the 10th percentile) to 126 points (at the 90th percentile), a 28-point difference. That seems like a wide range … but it’s perfectly normal. The average NBA team this season had a 27-point scoring range. The average range since 1979-80 (when the 3-point shot was introduced) is 28 points.

The Warriors weren’t the league’s most three-happy team, however. They were just seventh — behind the Houston Rockets, Cleveland Cavaliers, Los Angeles Clippers, Atlanta Hawks, Philadelphia 76ers and Portland Trail Blazers. So maybe the Dubs were pretty steady, but were those other teams inconsistent?

What’s going on here? Are teams that shoot a lot of threes actually more consistent than others? (Maybe they’re more resilient when facing different types of defenses or benefit from having better floor spacing?)

Actually, it’s mostly just because this data is pretty noisy. I ran a regression on all NBA teams since 1979-80 to predict their scoring range based on (i) the percentage of their field goal attempts that came from behind the arc and (ii) their per-game scoring average. Both variables have a positive and highly statistically significant relationship with a team’s scoring range. Teams that score more points have a wider scoring range, and, once you control for that, teams that shoot more threes do also.

Suppose, for instance, that a team scores 100 points per game and that 40 percent of its field-goal attempts are 3-pointers — higher, even, than this year’s record-setting Rockets. Its scoring range, according to the regression analysis, projects to be 29.7 points.

What about a team that scores 100 points but does so with only 10 percent of its shots being threes? No team has shot such a low percentage of 3-pointers since the 1999-2000 Philadelphia 76ers, but we’ll run the numbers just for fun. That team, according to the regression, would have a scoring range of 28.0 points. So it’s more consistent, but only barely so; its scoring range is only 6 percent narrower. This just really doesn’t matter much. 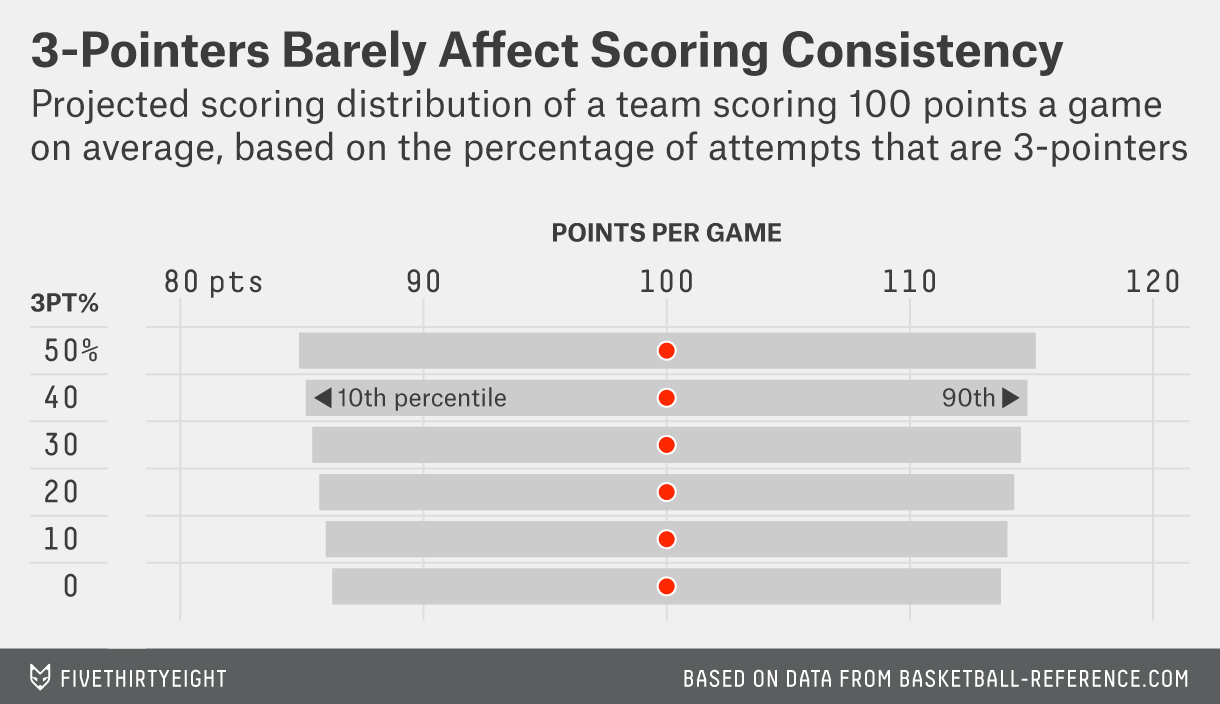 What matters a lot more, of course, is how effective a team is at scoring overall. The Oklahoma City Thunder, as I mentioned, had the most inconsistent offense in the regular season. But their 10th percentile score, 88 points, was still better than two-thirds of the league because they had a high per game scoring average.

And Golden State’s 10th percentile score, 98 points, was better than what almost a third of NBA teams scored on average per game. The Warriors will have better shooting nights than they did Sunday, but their bad nights aren’t indicative of a fundamental problem — they’re just bad nights.

CORRECTION (June 9, 11:45 a.m.): An earlier version of this article incorrectly said that if the Golden State Warriors had made 3-pointers at their regular-season accuracy rate, they would have won Sunday’s NBA Finals game 117-95. They would have won 111-95.