Teams that make the NBA Finals have great players. OK, that’s not exactly news. But teams can get great players in different ways. The 2008 Celtics became great largely by signing Kevin Garnett and Ray Allen in the offseason. Ditto for the 2011 Miami Heat, by snagging LeBron James and Chris Bosh. Ditto for the 2015 Cleveland Cavaliers.

Other finals teams, however, become great organically; they keep mostly the same players, but those players get a lot better. This year’s Golden State Warriors are one such team. The Dubs’ season has been remarkable, but it’s all the more special because they’ve excelled with nearly the same crop of players from last year.1 Stephen Curry became an MVP winner; Klay Thompson turned into one of the best shooting guards in the league; Draymond Green nearly won Defensive Player of the Year — this Warriors team became great thanks to leaps in performance by existing players.

The Warriors improved dramatically this season, according to our Elo ratings. Since the start of the 2014-15 season, they have surged 211 points. That’s the 13th-highest single-season Elo improvement of all time. That’s unusually high for a team that added little talent.

Using work by my colleague Neil Paine, I can quantify the talent change from year to year, based on multiyear Real Plus-Minus projections — these are ex ante projections, which incorporate performance in past seasons, an aging curve and regression to the mean.2 (This relationship is shown in the scatterplot below.) Compared with other teams that have reached the NBA Finals since 1980, and given their 3.3-point improvement according to RPM, the Warriors’ Elo rating should have improved by only 83 points. They did much better than that. 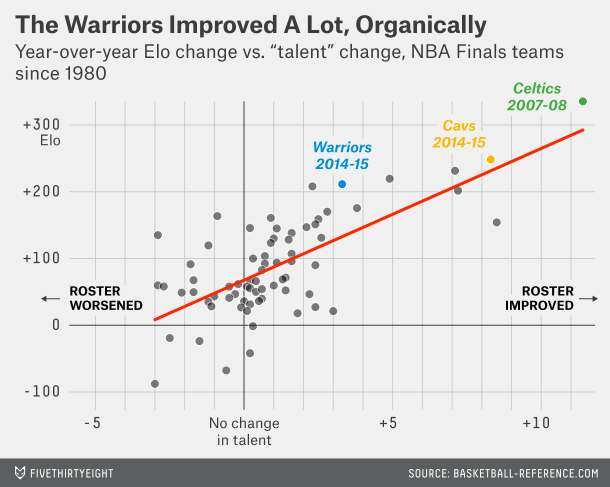 But guess who improved more than the Warriors, according to Elo, over the course of this season? Their finals opponent, the Cavs. Of course, the Cavs followed the model of the 2011 Heat and 2008 Celtics, signing big talent in the offseason: LeBron James and Kevin Love. James and Love — with Kyrie Irving before his and Love’s injuries — remade a struggling, below-average Cavs squad (who started the season with an Elo rating of 1463).

Look at finals teams with large single-season jumps in their Elo rating and you notice something: They look more like the Cavs than the Warriors. That is, newcomers to the NBA Finals have typically acquired a big piece. The best example is the 2008 Celtics, whose 326-point Elo improvement is by far the all-time highest. That 2008 Celtics squad, not surprisingly, also has the largest swing in RPM talent, 11.4 points.

To measure organic improvement only, we need to control for the influx of new talent. Specifically, we need to calculate how much the team would have improved if it had made no roster moves (this is the “old” talent), and compare it with how much they actually improved, thus deriving the benefit of new players (the “new” talent).3

As shown in the table below, among finals teams since 1980, the Warriors have the second-largest differential between their organic (“old”) talent and their “new” talent. This suggests that you don’t have to snap up a superstar in the offseason to see huge year-over-year improvement. Some teams, like the Warriors, can make it happen organically.

CLARIFICATION (June 5, 10:25 a.m.): Some commenters interpreted an earlier version of this post as suggesting that Kyrie Irving was new to the Cavaliers this season. Irving has been in Cleveland since 2011. We’ve updated the language to make that clearer.

Neil Paine contributed to this article.