The recent decline in the U.S. labor force won’t reverse on its own, but government policies could make a difference.

That’s the major takeaway from a new report from the president’s Council of Economic Advisers, which the White House released Thursday morning in conjunction with a speech by CEA Chairman Jason Furman at the Brookings Institution.

The shrinking labor force has been one of the hottest topics in economics in recent years. The share of the population that’s either working (employed) or actively looking for work (unemployed) is at its lowest level since the late 1970s. And that measure, known as the labor force participation rate, has continued to fall even as other measures of economic health have improved. 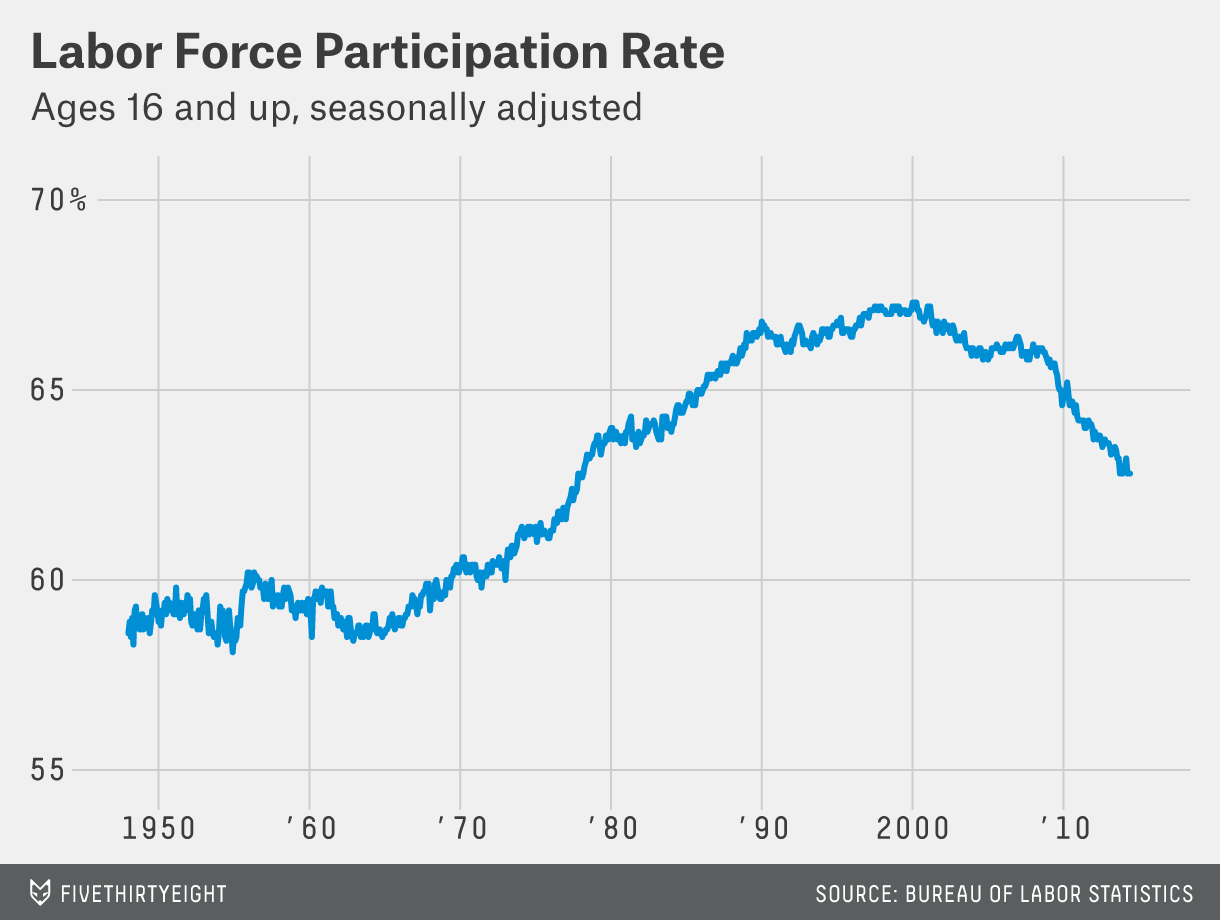 There are three main reasons for the decline. First is the recession and weak recovery. The official unemployment rate only counts people who are actively looking for work, and the sustained period of high, long-term joblessness has led many people to give up their searches. Stagnant wages and limited job opportunities have also meant that people who are on the fence about wanting to work — stay-at-home parents and college students, for example — are less likely to search for jobs. That leaves more people on the sidelines.

The second trend is the aging of the population. As the CEA report noted, 2008 was not only the first full year of the recession, it was also the year that the oldest members of the baby boom generation began qualifying for Social Security benefits. More than a quarter-million Americans turn 65 every month. More people are working into their 60s and 70s, but they remain in the minority. (The participation rate for Americans ages 55 to 59 is 72 percent. For those 60 to 64, it’s 55 percent, and for those 65 to 69 it drops to 32 percent.)

The third factor is other long-term trends besides aging. Female labor force participation rose for most of the second half of the 20th century then began to decline. Male participation has been trending down for essentially the entire post-World War II period. Young people are working less (at least partly because they’re spending more time in school), and old people are working more. Not all those trends are fully understood, but they predate both the recession and the boomers’ retirement. 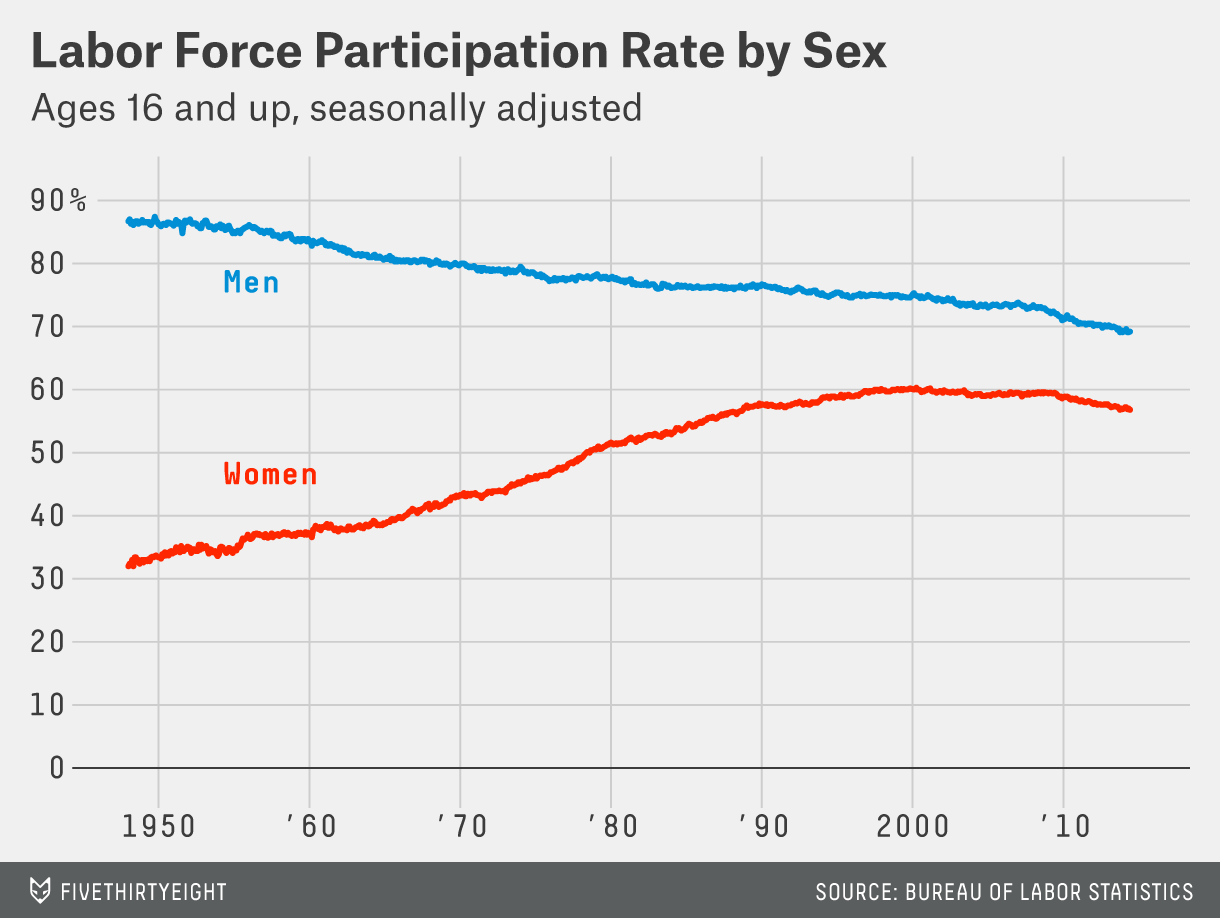 Economists more or less agree on what the factors are behind the decline in the labor force. What they don’t agree on is how much of the decline to assign to each factor. The debate has huge policy implications. If the drop in participation is mostly about the weak economy, that means the labor market is much worse than the 6.1 percent unemployment rate would normally indicate; there are millions of Americans who don’t count as unemployed but would be working if there were more jobs available. That means the government should be doing more to help boost the economy, whether through monetary policy, tax cuts, government stimulus or other programs.

On the other hand, if the drop is mostly about aging and other long-term factors, then the recent decline in the unemployment rate accurately reflects a rapidly improving economy. Rather than trying to stimulate the economy, policymakers should be focused on making sure it doesn’t overheat and lead to faster inflation.

The CEA report attributed about half of the post-2007 decline in the participation rate to the aging population. That’s a bit higher than my estimate from March, which the CEA cited, but is more or less in the middle of other recent calculations. (A quick aside: The CEA report implied that I used seasonally adjusted data, which lumps together everyone older than 55. I actually used unadjusted figures, which allow for a more granular breakdown, though not as granular as the unpublished data available to the White House.) So, out of the 3.1 percentage-point drop in the overall participation rate since 2007, 1.6 percentage points would have happened no matter what.

Another sixth of the decline in participation, the CEA said, was the expected result of the recession. Economists usually talk about the participation rate as a structural rather than cyclical indicator; that is, it rises and falls based on demographics and other long-term trends, not based on the year-to-year fluctuations of the economy. But those fluctuations do have some effect, and when a recession is severe, that effect can be significant. Based on past cycles, the CEA estimated that the Great Recession caused participation to fall 0.9 percentage points between 2007 and 2011. Now that the economy is improving, the trend is reversing: Normal cyclical factors now account for only 0.5 points of the post-2007 decline. Assuming the recovery continues, that number should continue to shrink.

That leaves about a third of the decline, 1 percentage point, unexplained. Some of that is probably due to pre-existing trends, such as the decline in male participation. But some could be due to the characteristics of the Great Recession that go beyond usual effects. One such factor is the unprecedented level of long-term unemployment, which could be leaving some people permanently out of the labor force. The CEA found less evidence for other commonly cited explanations, such as the increasing number of people receiving government disability benefits or the tendency for young people to hide from the weak job market by staying in school.

From a policy perspective, that final third is the most important piece. The aging trend is inevitable and unstoppable. The cyclical trend is already resolving itself. Left alone, the other trends are likely to continue, too — but, the report argued, they don’t have to. The CEA economists pointed to a variety of policies they argue could help boost the participation rate. Among them:

Of course, the administration’s critics will point to other policies that could work in the opposite direction. The Congressional Budget Office estimates that the Affordable Care Act will push down the participation rate by as much as 2 percentage points over the next decade, in part because people won’t have to work to obtain health insurance.