In April, Labor Secretary Tom Perez told me that “long-term unemployment is what really keeps me up the most at night.” Based on May’s data, it doesn’t look like he’ll be getting a good night’s sleep anytime soon.

Earlier this month, the Bureau of Labor Statistics reported that the number of Americans out of work more than six months had dropped to 3.4 million in May, the lowest level since the recession. There are still two-and-a-half times as many long-term unemployed as before the recession, but the number is down 50 percent from the 2010 peak and down more than 20 percent in the past year alone. The long-term jobless now account for just over a third of total unemployment, down from 45 percent three years ago. A Bloomberg article this week declared that the long-term unemployed were “finally catching a break.”

The reality, however, appears to be much bleaker. The government uses a relatively narrow definition of unemployment that includes only people who are actively looking for work. That means unemployment can fall for good reasons (because people are finding jobs) or bad ones (because they’re giving up looking). The recent decline in long-term unemployment is being driven by the bad reasons.

The chart above, versions of which we’ve run before, shows the share of unemployed people finding jobs each month. (The numbers are shown as a 12-month moving average to make the trend clearer.) For those out of work for six months or less, the so-called job-finding rate has shown steady improvement in the recovery and may even have accelerated in recent months, although it remains below normal levels. The long-term unemployed, however, have seen almost no gains. Only about 11 percent of the long-term jobless find jobs each month, little better than in the depths of the recession. Moreover, even those who do find jobs are often able to find only part-time or short-term work.

If they aren’t finding jobs, what’s happening to the long-term unemployed? They’re dropping out of the labor force altogether. As the chart below shows, the share of the long-term jobless who are giving up their job searches has been rising steadily, even as the job-finding rate has remained largely flat. (Not shown on the chart are the more than 50 percent who remain unemployed.) 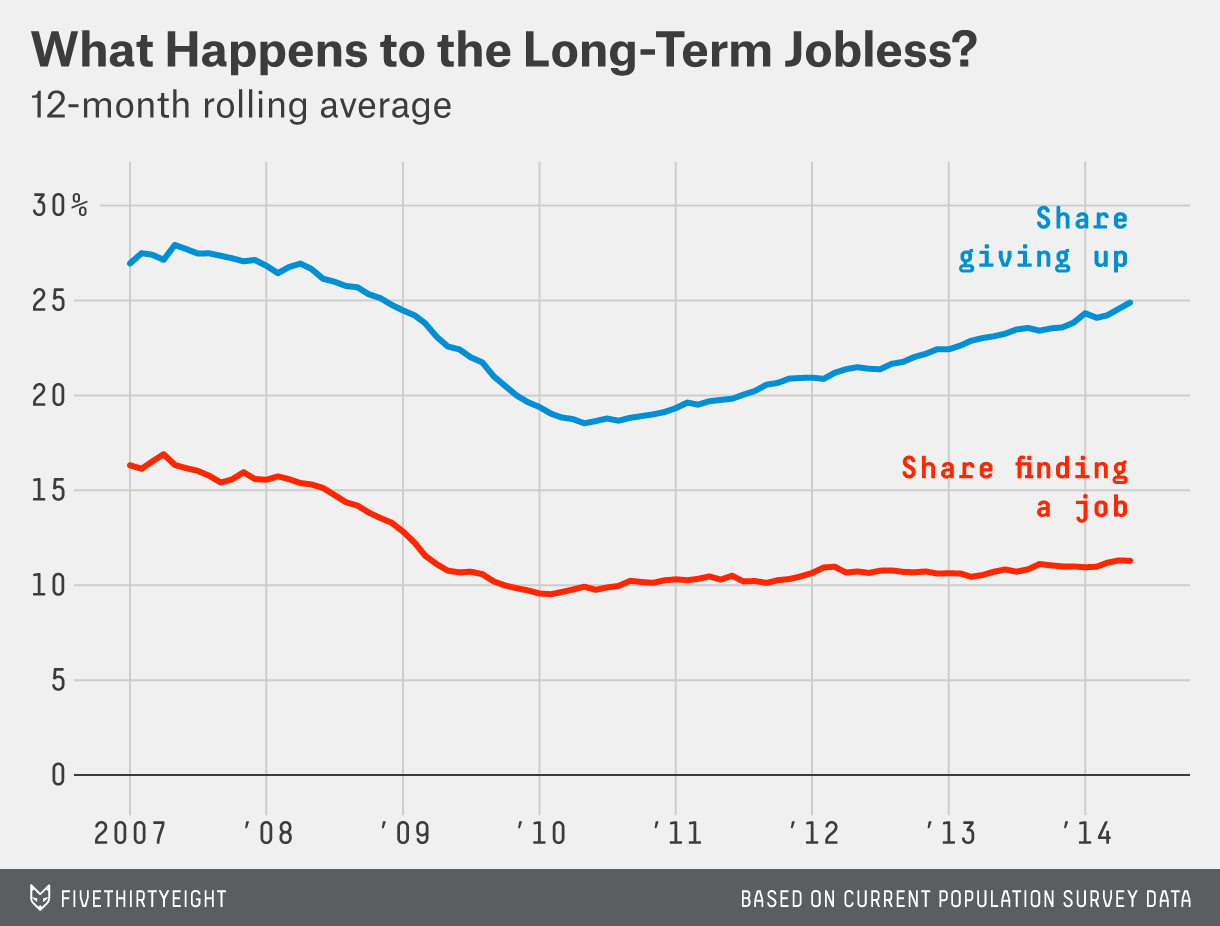 So, long-term unemployment is falling fast — but for all the wrong reasons.