Helene Laurusevage still gets up at 6 a.m. every day and packs lunch for her husband. She still sits down at her computer every morning to hunt for a job, and still updates the meticulous spreadsheet that she uses to document that search. Just one thing has changed: In January, the biweekly checks for $1,126 from the Pennsylvania Department of Labor and Industry stopped showing up in her bank account.

Laurusevage, 52, is one of more than a million Americans who lost payments when Congress allowed the Emergency Unemployment Compensation program to expire at the end of last year. The program, which Congress created in 2008, extended jobless benefits beyond the standard 26 weeks provided by most states; at its peak, the federal government provided an unprecedented 6 million workers with up to 73 weeks of benefits.1 The Senate earlier this year voted to renew the program, but House Speaker John Boehner hasn’t allowed the measure to come to a vote in the House.

The case against extending unemployment benefits essentially boils down to two arguments. First, the economy has improved, so the unemployed should no longer need extra time to find a new job. Second, extended benefits could lead job seekers either to not search as hard or to become choosier about the kind of job they will accept, ultimately delaying their return to the workforce.2

But the evidence doesn’t support either of those arguments. The economy has indeed improved, but not for the long-term unemployed, whose odds of finding a job are barely higher today than when the recession ended nearly five years ago. And the end of extended benefits hasn’t spurred the unemployed back to work; if anything, it has pushed them out of the labor force altogether.

Of the roughly 1.3 million Americans whose benefits disappeared with the end of the program, only about a quarter had found jobs as of March, about the same success rate as when the program was still in effect; roughly another quarter had given up searching. The rest, like Laurusevage, were still looking.3

Laurusevage didn’t expect it to be this hard. She had been her family’s primary breadwinner, earning roughly $60,000 as a health and safety officer for a Philadelphia-area heating and air conditioning company. Her husband, David, earns less than $35,000 a year selling truck parts. When her position was outsourced in April of last year, she thought that as a college graduate with a three-plus-decade history of steady work, she would find a job relatively quickly. But in many ways, her experience is typical. The long-term unemployed — typically defined as those out of work more than six months — are slightly more educated on average than the broader population of job seekers. And older workers like Laurusevage face a particularly tough time: The typical job seeker in her 50s has been out of work 26 weeks, versus 17 weeks for the typical 20-something.

Laurusevage also lost her job at a time when the economy, though improving, was still far from fully healed. The unemployment rate in her home state of Pennsylvania was 7.6 percent in April 2013, down from 8.7 percent in the worst of the economic downturn, but still three percentage points above its pre-recession level. That made her much less likely to find a job quickly: The unemployment rate at the time someone loses a job, more than demographics or any other factor, is by far the strongest predictor of how long it will take that person to find a new job.4 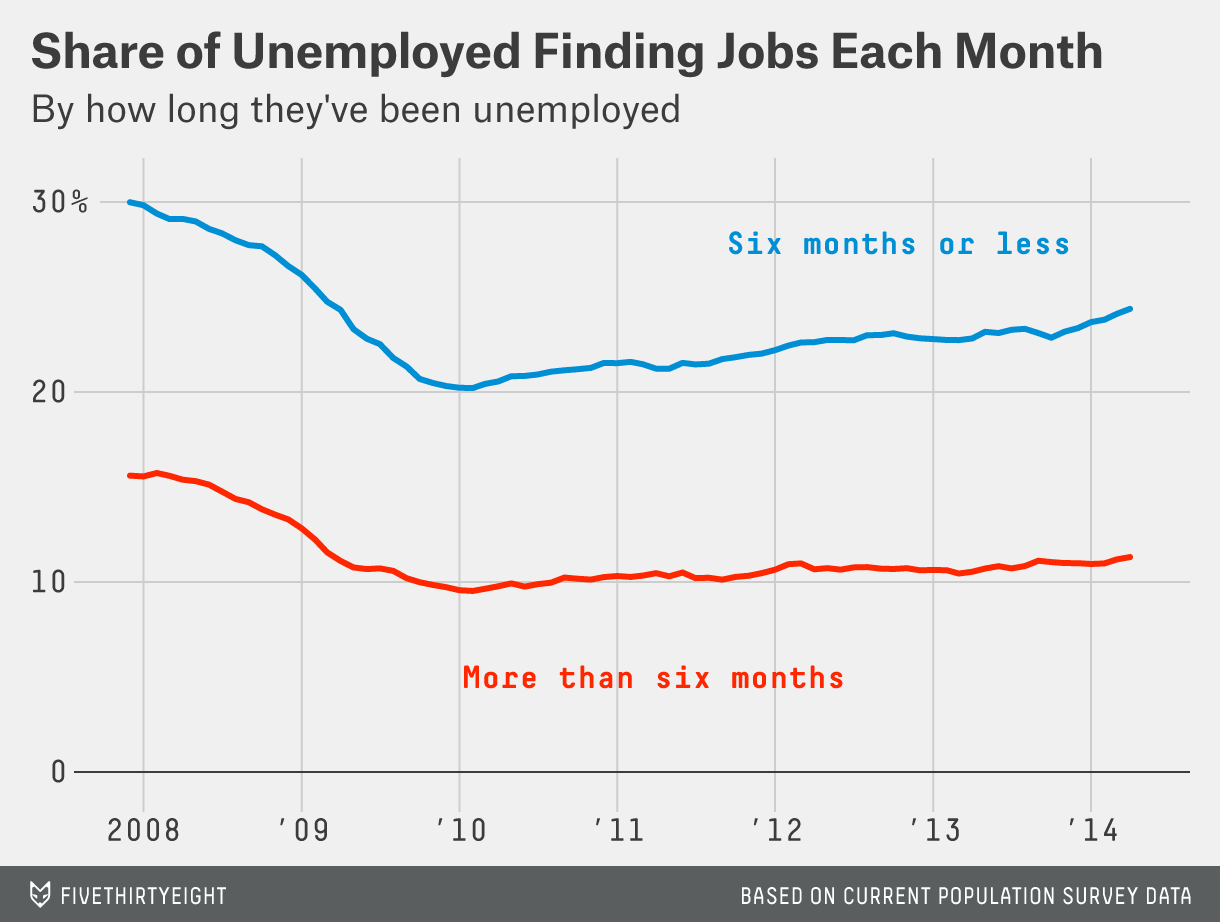 Some economists have argued that the end of the emergency unemployment benefits program could be a harsh but necessary medicine, prodding the unemployed back to work. But Laurusevage, at least, needed no prodding. The carefully formatted spreadsheet she uses to track her job search is a record of frustration: 246 applications, 24 interviews, no offers. In most entries, the “Outcome” field is blank; many companies these days don’t even bother to send a formal rejection notice.

“I can’t even find that crap job. I’ve applied to Wawa and Wawa won’t take me, or I haven’t heard back from them,” she said, referring to the regional convenience store chain. “I will take whatever you have. Temporary, part-time, seasonal, anything.”

The government doesn’t directly track what happens to people when their benefits run out. But the Current Population Survey, the monthly survey used to calculate the unemployment rate and related data, does ask people what state they live in and how long they’ve been unemployed. That means we can identify people who are likely to have lost benefits when the emergency program ended and compare their success at finding jobs to people who likely received benefits when the program was still in effect.5 This approach isn’t perfect — for one thing, we can only tell whether people likely qualified for benefits, not whether they actually received them — but past research suggests this methodology has a strong correlation with actual receipt of benefits.6

This analysis suggests the end of benefits has had at most a small impact on the rate at which workers find jobs. In 2013, people who likely qualified for emergency benefits had a monthly job-finding rate of 12 percent. In the four months since the program ended, the job-finding rate for likely cutoff victims — people who would likely have qualified for extended benefits if the program had been renewed — was slightly higher, at 14 percent. But the difference isn’t statistically significant. Even if it holds up as more data comes in, it could be the result of the improving economy rather than the direct impact of the end of the emergency program.

The end of the program might have had another effect, however: It may have made people less likely to keep trying to find jobs. Unemployment programs usually require recipients to show that they’re actively applying for jobs; once benefits expire, that incentive goes away. About 19 percent of cutoff victims have dropped out of the labor force each month this year, meaning they stopped actively looking for work. That’s a bit higher than the 16 percent who dropped out each month last year; that difference, too, is at most marginally statistically significant.7

We don’t yet have enough evidence to draw a firm conclusion about what impact the end of emergency benefits has or hasn’t had on the prospects of the long-term unemployed. The Current Population Survey is large, covering about 60,000 households each month, but only a small fraction of the people interviewed each month are unemployed, and even fewer were affected by the benefits cutoff. The total sample for likely cutoff victims over four months is a bit under 1,200 households, enough to draw only preliminary conclusions about a group that totals well over 1 million people in the overall U.S. population.

This much is clear, however: There has been no sudden surge of former benefits recipients into jobs. Nor have they abandoned the labor force in droves. Most have done what Laurusevage has done: continued looking for work, but without the lifeline that benefits provided.

For Laurusevage, the cutoff has been wrenching. Her husband’s salary, combined with the $563 a week she got in unemployment benefits — the equivalent of about $30,000 a year — was enough to make ends meet. But once her benefits expired in December, life got harder. Their savings depleted, they scraped together this month’s mortgage payment only by borrowing from David’s 79-year-old mother. They don’t know what they’ll do this month.

“We are about to go under,” Laurusevage said. “My entire savings account is gone. Everything I spent years to save is gone.”