The nearly 5-year-old economic recovery has so far been too weak to put many of the recession’s victims back to work. And there is mounting evidence that even if the economy accelerated now, it would be too late: Many if not most of the 3.8 million Americans who have been out of work for more than six months will never again hold steady jobs.

At the height of the jobs crisis, 6.8 million Americans had been unemployed for more than six months. The number is much smaller today not because the long-term unemployed, as these Americans are defined by the Labor Department, have found jobs, but because they have given up looking for work. And 3.8 million long-term jobless in February is still three times as many as before the recession.

Dig deeper into the numbers and a grim picture emerges: Few of the long-term unemployed are finding jobs. Even fewer are finding steady work. Most worryingly, their prospects aren’t improving along with the broader economy, even in parts of the country where the recovery is strongest.

Economists aren’t sure why being out of work for more than six months makes finding a new job so much harder. By most measures — sex, race, education and occupation — the long-term jobless look a lot like the short-term unemployed, and similar in most respects to the employed, too.1 The evidence suggests that they’re mostly unlucky: They lost their jobs in the midst of a terrible economy, when finding a new job quickly was particularly difficult. Once they cross the six-month threshold, their odds of finding a job drop off dramatically.

Discouragement is also likely part of the explanation; multiple studies have found that the longer someone is unemployed, the less time he or she spends each day looking for work. Discrimination is another possibility, with studies finding that employers are less likely to consider candidates whose resumes suggest they’ve been out of work for a while. It’s also possible that the best candidates find jobs more quickly, and the long-term unemployed are people who were undesirable to employers in ways that don’t show up in the data. Most studies, however, conclude that this “unobserved heterogeneity” explains at most a small part of the low job-finding rate among the long-term unemployed.

Whatever the reason, the long-term jobless have seen their already long odds grow even longer in recent years. The chart below shows the percentage of unemployed workers who find jobs each month. During the recession, the job-finding rate dropped sharply for everyone, no matter how long they’d been out of work. But while the short-term unemployed have seen their prospects improve over the past four years, people out of work for more than six months have made little progress, and those out of work more than a year have seen hardly any improvement at all. 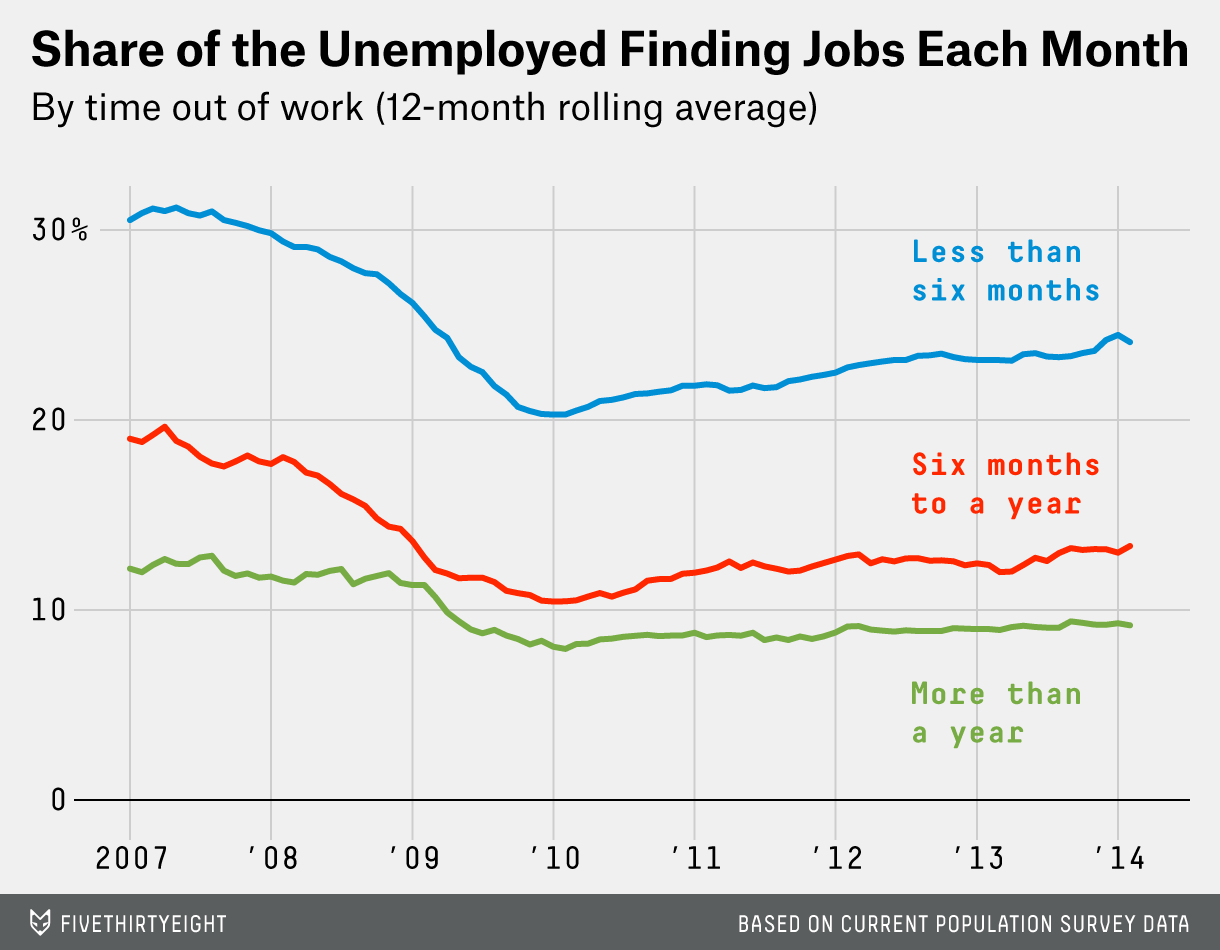 The chart makes the situation look better than it really is. About 10 percent of the long-term unemployed find jobs each month, which should mean that about 72 percent of them should find jobs over the course of a year.2 But only about 33 percent of them have jobs a year later. That’s because those who find jobs aren’t finding permanent work. In a new paper, Alan Krueger, former chairman of President Obama’s Council of Economic Advisers, and his Princeton University colleagues Judd Cramer and David Cho estimate that only about 11 percent of the long-term unemployed in any given month have steady, full-time jobs 15 months later.

Many long-term unemployed are simply giving up. More than one-third will be out of the labor force a year later, meaning they’re neither working nor looking for work. Most of them say they no longer even want a job, suggesting they’re unlikely to return to the job market in the future.3

The Princeton economists conclude that even a strong economy won’t be enough to rescue the long-term jobless. They find that the long-term unemployed don’t fare appreciably better in states that have comparatively strong job markets. And even before the recession, few people who’d been out of work longer than six months found stable employment.

A stronger economy might still help some people. The long-term unemployed did fare better during the strong job market of the late 1990s and early 2000s. Their odds still weren’t good — even in the best years, the share finding steady work within 15 months was barely 15 percent — but were better than today, when 11 percent find work. Given that we still have millions of people who’ve been out of work for extended periods, an improvement of a few percentage points could mean helping hundreds of thousands of people.

But most won’t. That conclusion has important policy implications, both for the present and the future. In the present, it means the long-term unemployed are, for all practical purposes, no longer part of the job market; most of them aren’t going to find jobs even if the economy improves. That means there’s less “slack” in the job market — a concept my colleague Andrew Flowers explained in more detail on Wednesday — than we might otherwise think.4 It looks like the Federal Reserve has reached the same conclusion: The Fed has been pulling back on its efforts to stimulate the economy, despite continued high unemployment and low inflation, suggesting it thinks the long-term unemployed are gone for good.5

The even bigger implications may be for the next jobs crisis, whenever it hits. If the situation facing the long-term unemployed is essentially hopeless — a harsh but not unreasonable reading of the evidence — then that makes it all the more important to avoid allowing people to fall into long-term unemployment in the first place.