We know that Americans are leaving the labor force at an unprecedented rate. The question is why they’re leaving — and how many of them will come back.

Economists are still trying to figure out how much the exit of millions of workers since 2007 has to do with the weak economy and fewer available jobs and how much it has to do with demographic factors like retiring baby boomers. It’s more than an academic question. If the shrinking labor force is mostly the result of the economy, then policymakers including President Obama, Congress and the Federal Reserve would be more motivated to grow the economy and put people back to work. But if demographic forces are to blame, then the best policymakers can do is to prepare the United States for a future in which fewer people are working.

The U.S. labor force is the smallest it’s been since the 1970s as a share of the adult population: 62.8 percent today, down from 66 percent in December 2007, when the recession began. If the labor force participation rate had remained unchanged over that time, nearly 8 million more Americans would be in the workforce today. The government defines the “labor force” as everyone over the age of 15 who’s either working (i.e. employed) or actively looking for work (i.e. unemployed).

Let’s consider the two extremes: In one, the weak economy is responsible for the entire decline, while in the other it can be attributed to longer-term demographic forces.

In the first scenario, 8 million Americans are, for all practical purposes, unemployed: They want jobs, but they’ve stopped looking for them. If that’s the case, the official unemployment rate of 6.7 percent in February is too low. The truer rate would be over 11 percent. Under those circumstances, the Fed would likely be talking about increasing its bond-buying efforts, not paring them back, and politicians would be talking about how to better respond to an ongoing jobs crisis.

In the second scenario, those 8 million people all left the labor force for reasons unrelated to the state of the economy. Baby boomers are retiring. Younger people are attending college at an increasing rate. Fewer men in their prime working years have jobs, a trend that began in the 1970s.1 These larger demographic shifts could mean the official unemployment rate of 6.7 percent paints a pretty accurate picture of the nation’s economic condition.

In some ways, this second scenario is actually the darker of the two. The first represents a crisis, but one that should be resolved as the economy heals. The second is a chronic condition: If people are leaving the labor force for reasons unrelated to the weak economy, then a stronger economy isn’t likely to bring them back. Since labor force growth is a chief driver of any economy — more workers means more production, more income and more spending — a permanently smaller labor force would mean a permanently smaller economy.

A lot of economists have tried to solve the puzzle of declining labor force participation, with widely varying results. Researchers from the Federal Reserve Bank of Philadelphia, for example, recently concluded that about two-thirds of the decline in the labor force can be attributed to demographics and other so-called structural factors. But economists at the International Monetary Fund mostly blame the weak economy.

One reason for this disagreement is that there are actually two different questions, which often get muddled: The first is how many people would have left the labor force even if the recession had never happened. The second is how many of those who have left will ever return.2 It’s worth considering these separately.

1. How many people would have left anyway?

Given the demographic forces at work, there’s no question the labor force would be smaller today, with or without the recession. But how much smaller? Using the methodology detailed below, we can estimate that roughly 3.2 million of the 8 million workers would have left the labor force regardless of the state of the economy.

By repeating that exercise for each demographic group, we can estimate what the overall labor force would have looked like if the recession had never happened. As the chart below shows, under these assumptions the total participation rate would have fallen to about 64.7 percent by the end of 2013 — down significantly from 66 percent in 2007, but not nearly as steep a drop as actually occurred. Put another way: our model suggests that demographics and other long-term trends account for about 3.2 million of the 8 million people now “missing” from the labor force. That leaves nearly 5 million people who would be working or looking for work if it weren’t for the recession and slow recovery.3 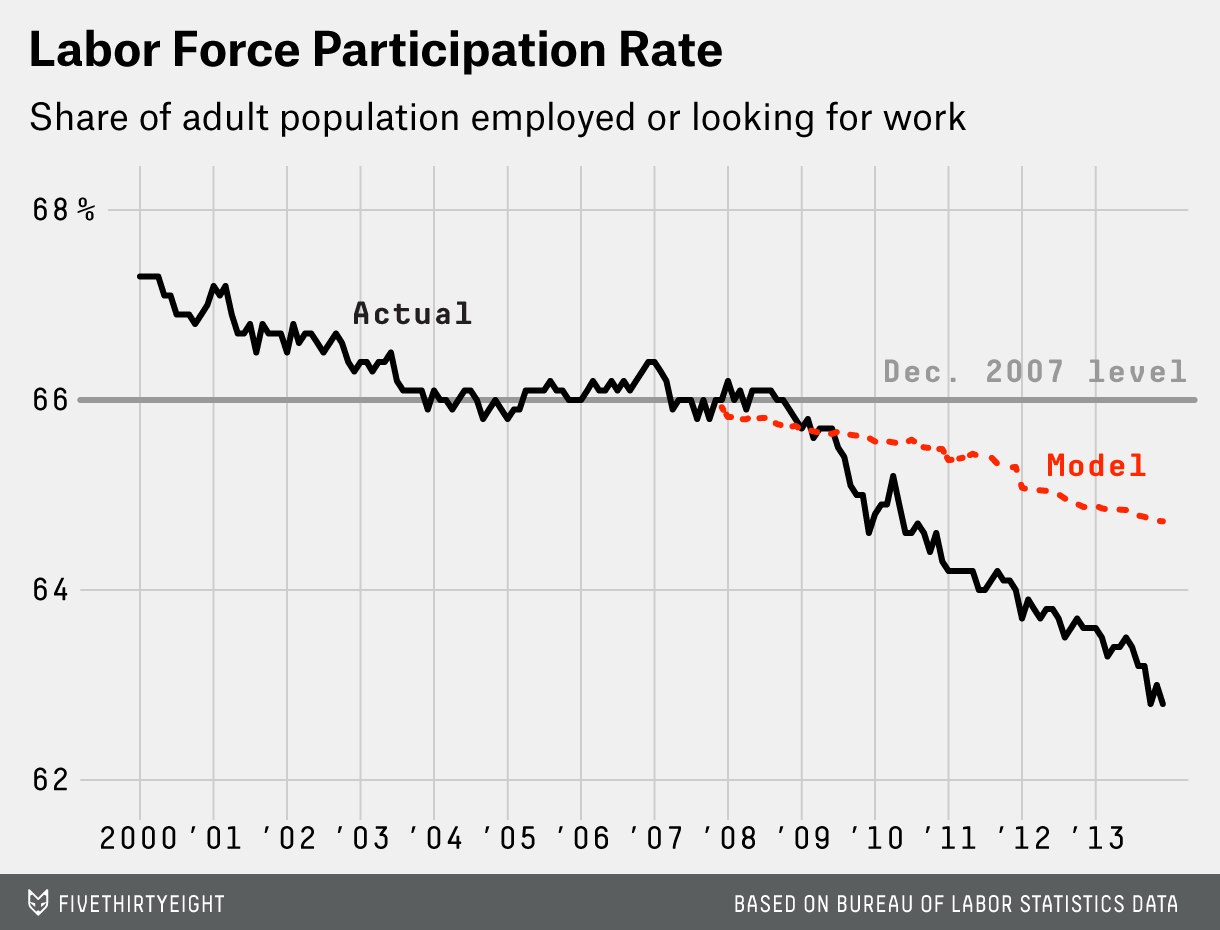 2. How many are coming back?

What really matters, however, is how many of those 5 million people will rejoin the labor force. That’s the group that policymakers might actually be able to do something about.4

This is a much harder question to answer. The U.S. has never before faced such high rates of long-term unemployment for such an extended period. Nor has it seen a severe recession during a time when the labor force was already shrinking. That makes it difficult to guess how people who left the labor force during the recession will respond when and if the job market turns around.

We know that certain people are unlikely to come back to the labor force. People who receive federal disability benefits, for example, rarely return to work. The number of Americans receiving such benefits has risen by 1.8 million since the start of the recession. That’s partly because the population is aging — older workers are more likely to become disabled. But much of the increase can be blamed on the weak economy, which has led people who might otherwise be able to work to apply for disability payments.5 A rough calculation suggests about 1.1 million more people are receiving disability payments than would be expected based on aging patterns alone.6

That leaves 4 million or so “missing workers.” What will happen to them? About 1 million are under 25; many of them likely stayed in school longer. It’s a fair bet that most will enter the labor force at some point. Another 1 million are 65 or older — they will be replaced by a new generation that doesn’t bear the same scars and thus will participate in the labor force at a rate more in line with historical patterns. Together, that’s 2 million workers we can expect to enter the labor force in coming years.

That still leaves about 2 million Americans in the prime of their working lives who are on the sidelines. We have little information about who these people are or what they’re doing — how many of them are idled construction workers awaiting the next building boom, for example, versus former secondary earners who would go back to work only if the right opportunity came along. Their fate, whether or not they rejoin the labor force, likely rests on the strength of the economy in coming years.

Our final tally, then, is that 2 to 4 million of our original 8 million “missing workers” might return to the labor force as the economy improves. That’s a lot of people: If all of them were considered unemployed, the unemployment rate would now stand at between 7.8 percent and 9 percent, down significantly from the worst of the recession, but high enough to suggest an economy that is still far from fully healed.

The uncertainty in this estimate reflects the fluid nature of the job market. Economists often talk about the jobless as divided between those affected by “cyclical” forces — the normal ups and downs of the economy — and “structural” forces, such as demographics. But the reality is rarely so neat. The strong economy of the late 1990s and early 2000s lured many people into the labor force who many economists would have considered unlikely to find work in any circumstances.  They included people with mental or physical disabilities, criminal records or drug and alcohol problems. A sufficiently strong economic recovery today could repeat the 1990s magic, drawing back all the missing workers, even the ones on disability.

But there is also a more troubling possibility: If the recovery remains weak, people we now expect to return to the labor force will instead drift further away. More of them will go on disability, or retire, or otherwise drop out. The pool of 2 to 4 million workers who are still reachable by economic policy will eventually become unreachable, and the decline in the labor force will at last be permanent.