For decades, the retirement of the baby boom generation has been a looming economic threat. Now, it’s no longer looming — it’s here. Every month, more than a quarter-million Americans turn 65. That’s a trend with profound economic consequences. Simply put, retirees don’t contribute as much to the economy as workers do. They don’t produce anything, at least directly. They don’t spend as much on average. And they’re much more likely to depend on others — the government or their own children, most often — than to support themselves. 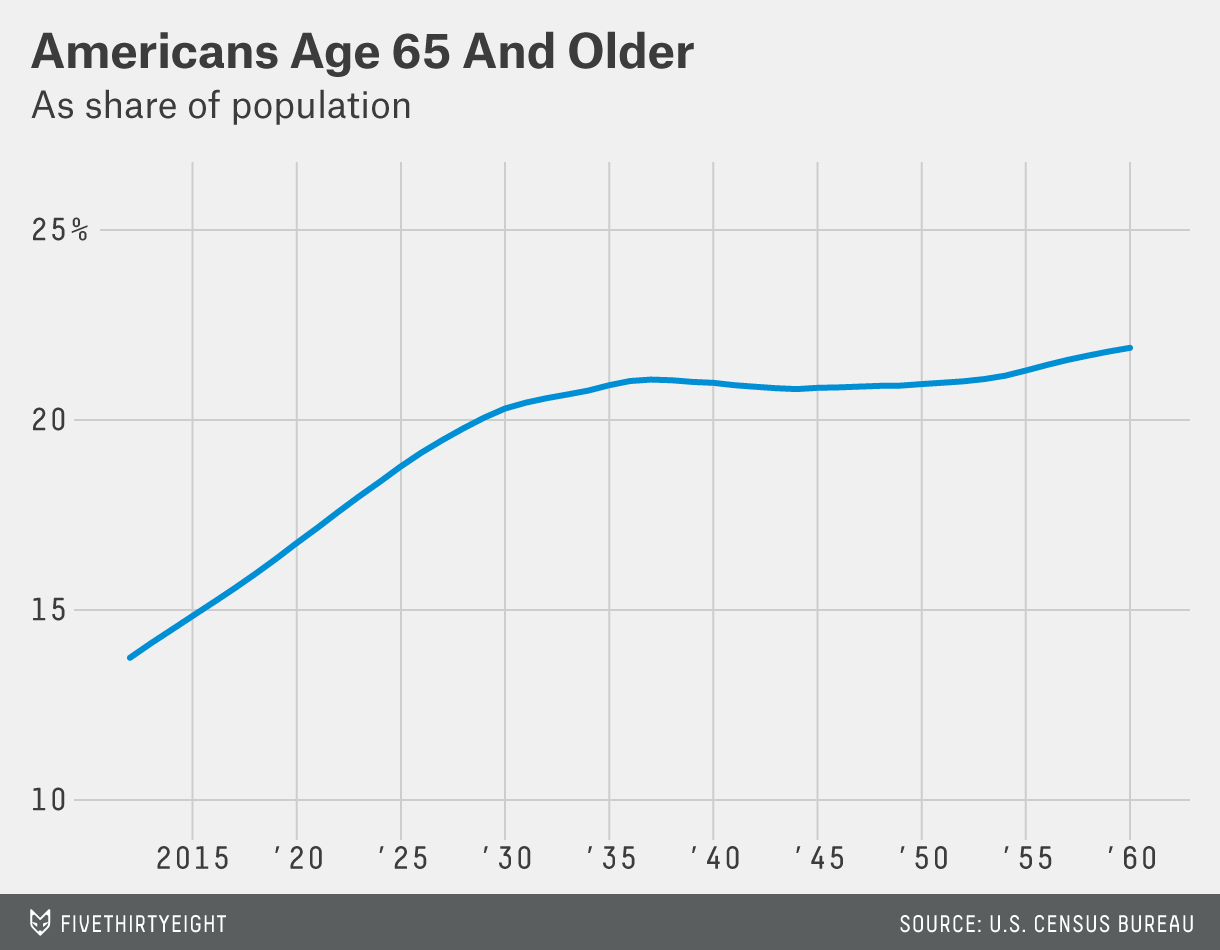 The recession may have delayed the inevitable for a time. The financial crisis wiped away billions in retirement savings, forcing many Americans to work longer than planned. But the stock market has since rebounded, and there are signs that more Americans are at last feeling confident enough to leave the workforce. The labor force participation rate for older Americans — the share of those 55 and older who are working or actively looking for work — has fallen over the past year after rising through the recession and early years of the recovery. Roughly 17 percent of baby boomers now report that they are retired, up from 10 percent in 2010.1

Now that the wave has begun, nothing is likely to stop it. The Census Bureau on Tuesday released a pair of reports that show just how dramatic an impact the graying of the population will have in coming decades.

Nearly a quarter of Americans were born between 1946 and 1964, the typical definition of the baby boom generation. That’s more than 75 million people. In their heyday, the boomers were an unprecedented economic force, pushing up rates of homeownership, consumer spending and, most important of all, employment. It’s no coincidence that the U.S. labor force participation rate — the share of the adult population that has a job or is trying to find one — hit a record high in the late 1990s, when the boomers were at the peak of their working lives.

It’s been downhill ever since. The participation rate hit a 36-year low last month, and while there are multiple reasons for the decline, the aging of the baby boom generation is a dominant factor. In 2003, 82 percent of boomers were part of the labor force; a decade later, that number has declined to 66 percent, and it will only continue to fall.

All else equal, fewer workers means less economic growth. One way to measure this is a figure known as the “dependency ratio,” or the number of people outside of working age (under 18 or over 64) per 100 adults between age 18 and 64.2 The higher the ratio, the worse the news: If more of the population is young or old that leaves fewer working-age people to support them and contribute to the economy. 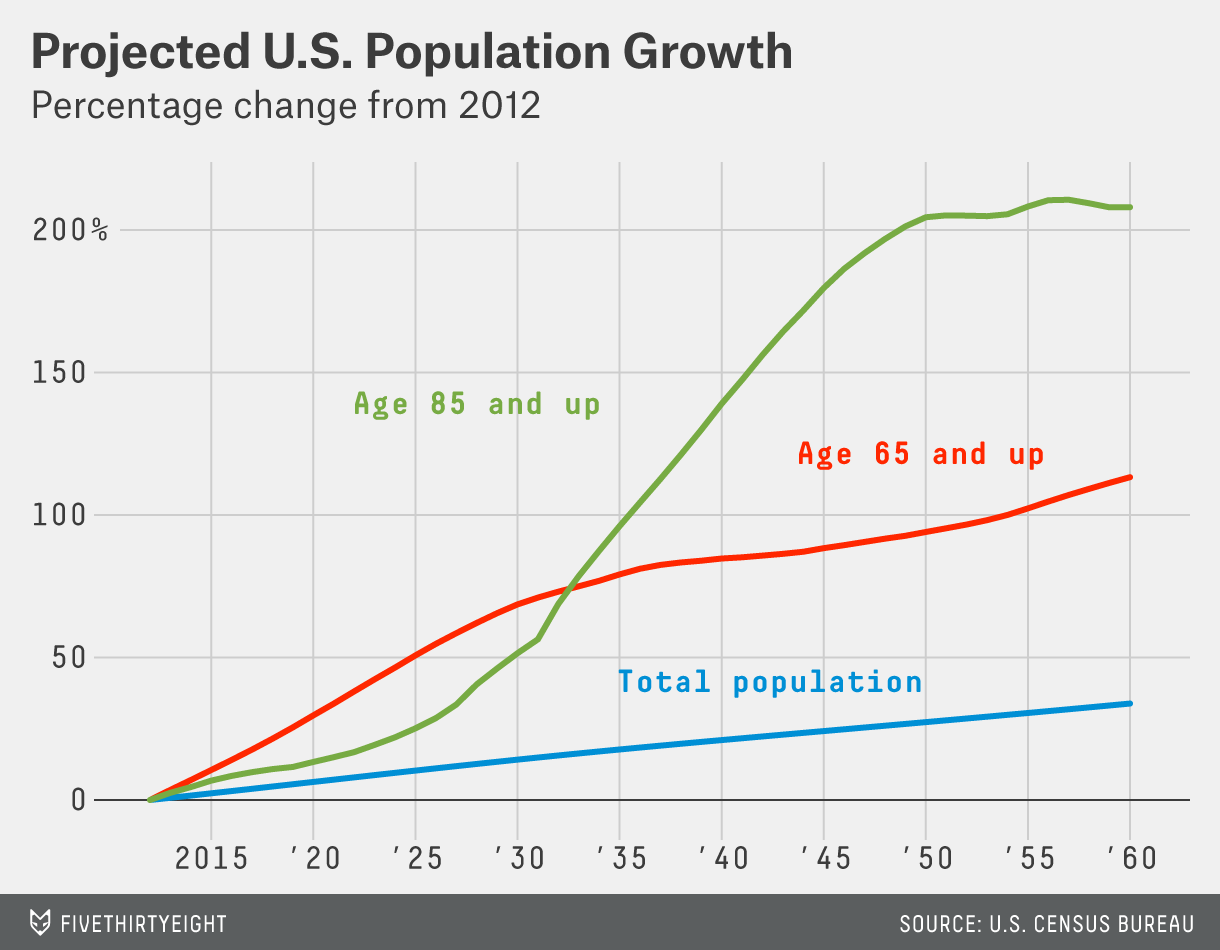 The dependency ratio is a blunt instrument. Not everyone retires the day they turn 65; indeed, as lifespans lengthen (and pensions decline), more people are working later in life. But only up to a point: Plenty of people work past 65; few work past 85.3 It will be a while yet before baby boomers start turning 85, but more of them will get there than any previous generation. By 2050, more than 4 percent of the population will be at least 85 years old, more than double today’s figure.4 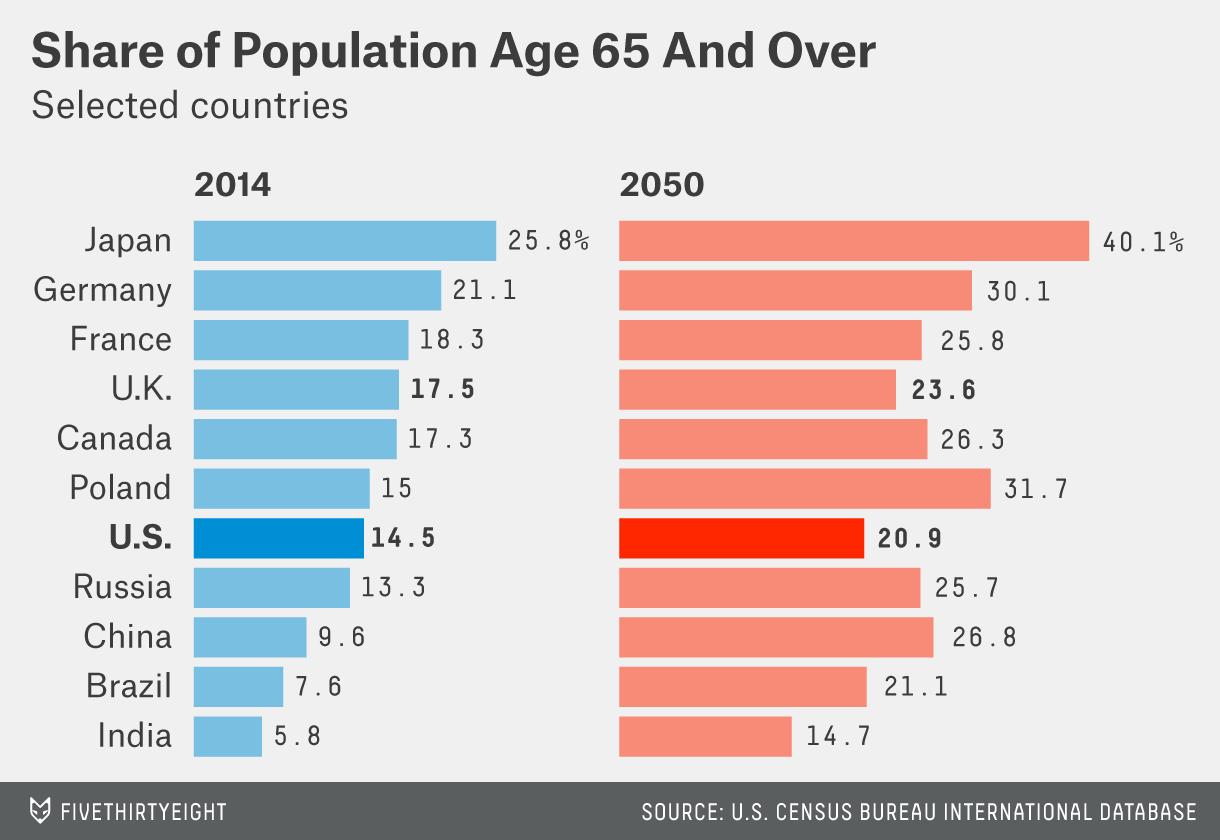 As bad as the U.S. demographics look, things are worse in much of the world. The U.S. has fewer residents over 65, as a share of its population, than most developed countries, and the disparity will only grow in coming decades. In 2050, about 21 percent of the U.S. population will be 65 or older compared to more than 30 percent in much of Western Europe and an incredible 40 percent in Japan. China, as a result of its “one child” policy, faces its own, somewhat different, demographic crisis.

One reason the U.S. is in better shape is its comparatively high rate of immigration. Since people tend to migrate when they are younger, immigrants tend to bring down the age of the population as a whole. Moreover, at least in the U.S., immigrants tend to have a higher birth rate than the native-born population, although the gap has narrowed somewhat in recent years. The future direction of immigration, therefore, makes a big difference to the age breakdown of the U.S. population. The Census Bureau’s demographic estimates are based on a middle-of-the-road projection of future immigration, but the bureau also publishes alternative scenarios. In the “high immigration” scenario, the U.S. has nearly 22 million more working-age residents in 2050 than in the “low immigration” case.

The U.S. also has another trend working in its favor: Baby boomers are retiring just as their children — sometimes known as the “echo boomers” — are entering their prime working years. Boomers are no longer even the largest age cohort; more of today’s Americans were born in the 1980s and 1990s than in the postwar years. As today’s teens and 20-somethings enter the workforce, they will partly offset their parents’ exit. Indeed, for many young people, mom and dad can’t retire soon enough; some experts argue that boomers, by staying in the workforce longer than past generations, are essentially clogging the usual professional pathways, leaving few opportunities for people beginning their careers.