Quantifying legroom: Since everyone has been complaining lately about reclining airplane seats, Seth Kadish, a data scientist at Chegg, wanted to give passengers some perspective. Kadish plotted out the distance between seatbacks (described as seat “pitch”) and the distance between armrests (“width”) using data from SeatGuru. The result is a chart that compares seats on 109 airlines and six different flight types ranging from economy short-haul to first class long-haul. There’s little variation in economy class (the average seat has about 31.7 inches of pitch and 17.5 inches of width), but there are big differences among airlines when it comes to spaciousness in business and first class.

Go for it!: If you’re a football coach of unsure what play to call on fourth down, the NYT 4th Down Bot claims to have the answer — and for the most part it’s a simple one: “Almost always consider going for it.” The bot claims to obtain its niche expertise by analyzing, in real time, every single fourth down of every NFL game, every week. The resulting interactive shows what coaches are doing, what the bot thinks they should be doing, and the considerable gap between those two data sets.

The Gates keeper: The Bill and Melinda Gates foundation has given over $200 million in funding toward the development and implementation of Common Core, the new set of national education standards. At Mother Jones, Tim Murphy and AJ Vicens describe the amount each grantee received, how the educational initiative began, and why it fell out of favor so quickly.

Egregious decisions: This Businessweek interactive that tracks pitches in Major League Baseball has been around for a while, but was recently updated, so we can give BW a thumbs up while they give some umpires a thumbs down. The site features a worst call of the day (a dishonorable title most recently bestowed upon Todd Tichenor for calling a strike on a pitch that missed the strike zone by 6.5 inches), as well as an umpire ranking based on incorrect calls dating back to 2012. If you’re a skeptical type and want to check Businessweek’s rankings, they’ve published all their data on GitHub. Alternatively, you can watch Tichenor’s call below and decide for yourself.

The Scottish referendum is getting harder to call: With the referendum on Scotland’s independence from the U.K. just weeks away, the Guardian’s data editor, Alberto Nardelli, took a look at the latest poll showing that the gap between “yes” and “no” is shrinking. As Nardelli explains, though, caution is needed when looking at the rise in pro-independence responses — turnout matters and, since not all age groups are as likely to vote, some yeses mean more than others.

One in five women: The Centers for Disease Control and Prevention released a new report on Friday about the prevalence of sexual violence. Sarah Kliff at Vox wrote a short post that left the reader with one takeaway statistic: Nearly one of every five women in America — 19.3 percent — has been raped.

The vaccination crisis: In a recent article on FiveThirtyEight, Emily Oster explained the reasons why states should aim for 100 percent vaccination rates. Although state law in California requires children entering kindergarten to be immunized against certain diseases, exemptions can be granted on the basis of personal belief. Wanting to understand the prevalence of that decision, staff at the Los Angeles Times mapped exemption rates in California and found that they have doubled in the past seven years. Michael Hiltzik then compared those exemptions to income information and discovered that “exemptions from child immunizations are correlated with high median incomes,” leading him to reach this conclusion: “Rich, educated and stupid parents are driving the vaccination crisis.” 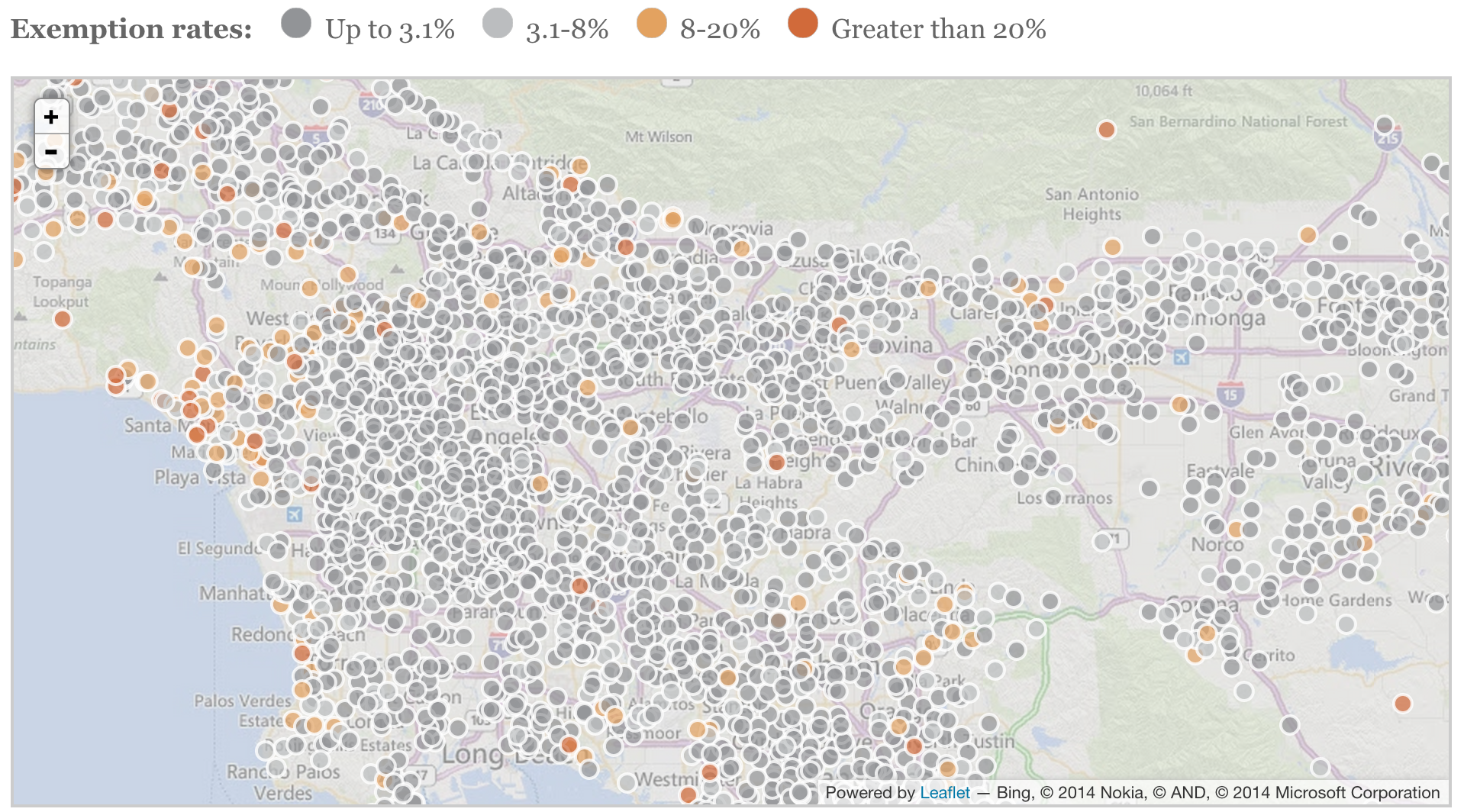