A murderers’ row of world-class chess players is assembled in St. Louis, Missouri, this week. But they haven’t been much trouble for Fabiano Caruana.

Caruana has been dominating the field at the elite Sinquefield Cup, hosted by the Chess Club and Scholastic Center of St. Louis. The 22-year-old Italian — born in Miami — is ranked third in the world, according to the September FIDE list. (The Fédération Internationale des Échecs is the game’s international governing body.) He became a grandmaster at the age of 14 — at the time the youngest to do so in the history of both Italy and the United States.

And while Caruana has been a world-class chess player for a long time, his dominance this week has been unprecedented. He currently sits at seven wins, zero losses and one draw. With two days left in the tournament, he has already clinched victory.

Six players compose the field at this event, and the competition is stiff, to say the least. In fact, it may be strongest chess tournament ever held in the United States. The headliner is (or at least was, before the Fabiano Show began) Magnus Carlsen, the 23-year-old Norwegian reigning World Champion, grandmaster, former prodigy and highest-rated player on earth — not to mention sometime fashion model. Caruana dispensed with Carlsen in 34 moves in the third round, and played him to a 42-move draw in the eighth.

Here are Caruana’s results after the eighth match of the 10-round, double-round-robin tournament:

Caruana’s seven-game streak deserves a place in history. It wasn’t just an undefeated streak, it was a winning streak — no games were lost or drawn. (And Caruana won the two games he played before the Sinquefield Cup.) According to Chess.com, Wilhelm Steinitz, the first undisputed World Champion, won 25 consecutive games from 1873 to 1882. The American World Champion Bobby Fischer won 20 games against top competition in the 1970s. However, while it’s difficult to compare the strength of chess players over time, it’s likely that the strength of Caruana’s opponents is considerably higher than that of Fischer’s 40 years ago or of Steinitz’s 130 years ago.

During Chess24.com’s coverage of the event’s eighth game, grandmaster Ben Finegold compared Caruana’s run to others by greats Anatoly Karpov and Mikhail Tal. “This is by far the most impressive to me,” he said. “You can’t go 7-0. This is like the impossible happening right before our eyes.”

Aronian, the world’s No. 2, added, “That’s amazing. I think that’s a historical achievement for anybody.”

The two best chess players in the world are 22 and 23 years old. Here are the rises to prominence of Caruana and Carlsen (and keep in mind that Carlsen is about 20 months Caruana’s elder): 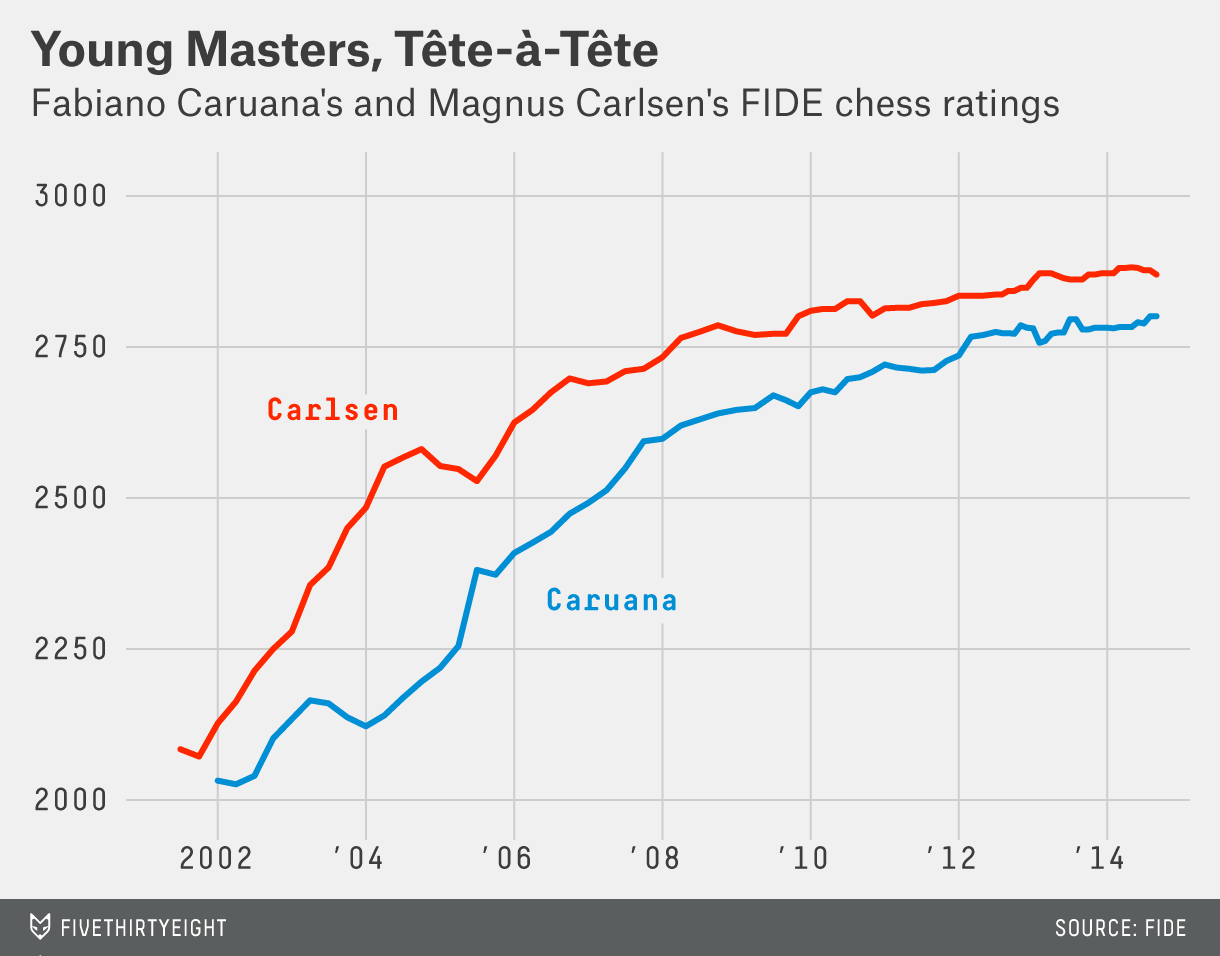 The final two games of the Sinquefield Cup will be played Friday and Saturday, each at 3 p.m., and a $100,000 prize awaits Caruana once the result is official. He will face Nakamura and Aronian, while Carlsen will face Aronian and Topalov. Live coverage is available online.

Caruana is not contending for Carlsen’s world title this year — that honor goes to 44-year-old Viswanathan Anand, fifth in the world and winner of the Candidates Tournament. The World Championship matches will be held in November. But, given Caruana’s and Carlsen’s ages, you can expect that they will duel for the title, and often, in the future.