American women’s tennis is led by the No. 1 player in the world, Serena Williams, who has won 17 Grand Slam titles and remains the favorite to win the U.S. Open for the third year in a row.

I wondered, though: Are the American women a stronger force in world tennis than the American men are? Beyond Serena and Venus Williams — who are 32 and 34 years old, respectively — are the women any deeper and stronger than the men?

To check, I downloaded the latest singles rankings from both the men’s ATP World Tour and the women’s WTA tour — every player in the world who has a professional ranking point, even just one.

As of Aug. 25, the start of the U.S. Open, there are 2,232 ranked men and 1,323 ranked women. About one in 12 of the ranked women are from the U.S., more than from any other nation (Russia trails narrowly). U.S. men make up one in 16 of all ranked professional players, tied with France for most in the world.

Counting ranked players is a pretty rough gauge of national tennis strength. A player outside the Top 500 will appear in few tour events, let alone Grand Slams. Getting a ranking can be a product of opportunity as much as merit. An American player who’s just as good as, say, an Algerian player lives much closer to events where he can earn points, and therefore doesn’t have to spend as much to play.

So I went beyond merely counting ranked players and added up the ranking points for each nation. This is a decent proxy for how much money players have earned in the sport, because ranking points generally scale with earnings. The bigger the tournament, the more points and dollars are available; and the further a player advances, the bigger a piece of the pie she earns. By this math, Serena Williams’s 2,000 points for winning the U.S Open last year — which still counts in the latest 52-week ranking — is worth slightly more than No. 24 Sloane Stephens’s cumulative tennis accomplishments in the last year. And Serena’s annual achievements are worth about five Sloanes in national tennis strength. 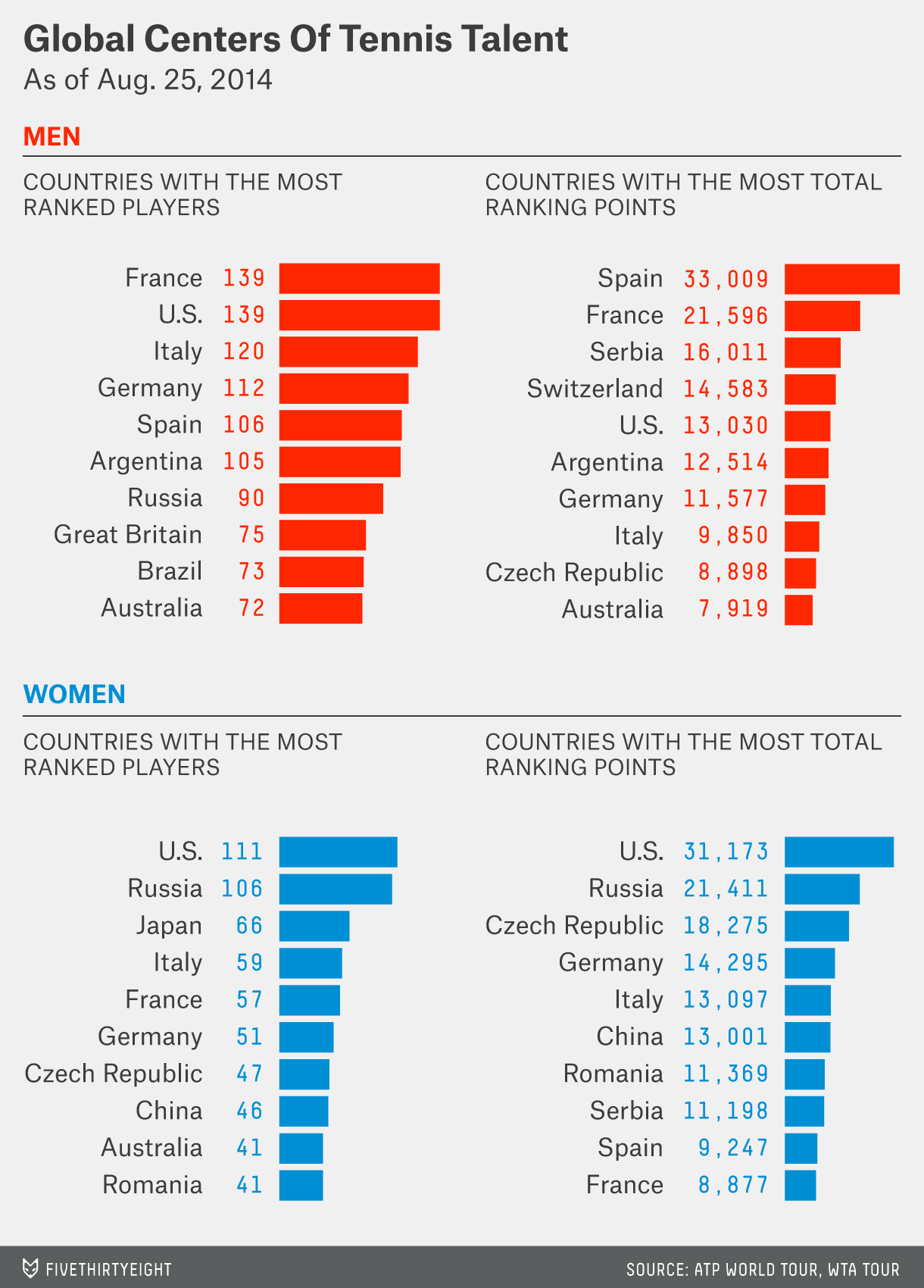 Here, the U.S. women dominate their peers, and their male counterparts. They hog 12 percent of the world’s female tennis talent — half again as much as runner-up Russia. The U.S. men have just 5 percent of global male talent. The U.S. trails four European nations — Spain, France, Serbia and Switzerland — that combined have less than one-half the population of the U.S.

Just five years ago, American men and women were much closer in their global tennis standing. American men held 8 percent of tennis ranking points, compared to 10 percent for women. The women have rebounded slightly while the men have lost ground.

American men’s tennis boosters can point to a few reasonable explanations. First, the men’s long-term slump is less precipitous than the women’s. I checked by downloading pre-U.S. Open rankings data from the ATP and WTA websites for prior years, with major help from my colleague, Paul Schreiber. At this stage of the season in 1999 — the first year for which WTA ranking data is available on the WTA website — American women commanded 21 percent of global tennis power. American men held 11 percent. The men have narrowed the gender gap even as they have fallen further behind the rest of the world.2

Globalization also has brought more competition to the men’s game. Over the last few decades, the sport’s footprint has expanded further beyond the traditional bases in the four Grand Slam-hosting nations (the U.S., U.K., France and Australia). This is particularly so in the men’s game. That’s partly because of unequal opportunities; many countries still haven’t given girls the same chance to play sports as boys, or have done so only recently. Economic incentives have also favored the men: The Grand Slams equalized pay only seven years ago, and many other tournaments still pay men more than women. There also are more men’s professional events, which helps explain why there are more ranked male players than female players.

The result is that 104 countries have ranked men, compared to just 79 countries with ranked women. That represents an increase of 14 countries from this time in 1999 for the men, but a rise of just four countries for the women.

American women also are competing with fewer talent bases around the world. Russia is the only other country with at least 5 percent of the world’s ranked women. Three other countries besides the U.S. have a share that big of all ranked men.

Another way to understand the men’s relative struggles is that the Williams sisters might be outliers who skew the whole comparison. Their story often has been described as one of the most remarkable in sports history, and rightly so. Their parents, Richard Williams and Oracene Price, trained them at a very young age with the goal of making each the No. 1 player in the world. Their daughters each achieved that audacious goal, and did so outside the well funded national centers. They have remained so good, past the age that most other women’s greats retired, that they account today for more than one-third of all U.S. women’s ranking points.

What if the Williams family had never picked up tennis rackets? Then U.S. women would account for less than 8 percent of global talent today, much closer to their male counterparts.3 That group includes a number of young players who could one day enter the Top 10 but so far have performed inconsistently, including Stephens, Christina McHale and Madison Keys. None of them — nor the other three American women who rank behind the two Williams sisters but inside the Top 50 — reached the third round of the U.S. Open.4

Here’s an even more outrageous hypothetical: What if Richard and Oracene had trained two young sons instead of daughters, and Jupiter and Steve had the same success that Venus and Serena have had? American men would hog a greater portion of global tennis talent than American women would today.

While that scenario is farfetched, it is rooted in the reality of a sport usually dominated by just a few superstars. Even when American tennis was much deeper than it is today, one or two singular talents carried most of the load for winning big tournaments and contending for No. 1. Jimmy Connors and John McEnroe gave way to Pete Sampras, Jim Courier and Andre Agassi. Those men won 41 of American men’s 46 Grand Slams in the last 42 years. Maybe it’s just a fluke that another player with that kind of talent hasn’t come around since Sampras and Agassi retired — or hasn’t played tennis.

As it happens, Richard Williams, who is 72, has a two-year-old son. But if Richard has his way, Dylan won’t help pick up the mantle for the American men. “He’ll never be a billionaire in tennis,” Richard Williams said earlier this year. He wants his son to buy a gold mine.