Dear Mona,
I pee in the shower almost every morning — great time-saving mechanism and as a female I find it liberating to pee at will. I thought this was totally normal, until this weekend when I found out that not only ONE but TWO of my friends have NEVER peed in the shower. Who is the freak in this situation?
Allie, 25, NYC

Don’t worry, love, your friends are the freaks. Most American adults pee in the shower, and I trust 1,169 survey respondents more than I trust your two pals.

A YouGov Omnibus survey in July posed the question, “In which of the following places, if any, have you ever urinated?” Sixty-two percent of people checked the box that said “in the shower.” What’s more, this appears to be a national phenomenon: The fraction of people who say they urinate in the shower is pretty consistent whether you’re looking at U.S. regions, or age, income, sex, race, education or marital status.

But before you get too excited and start brandishing labels like “freak,” you should take a closer look at the numbers on shower-peeing frequency. It turns out that 47 percent of people who said they had relieved themselves in the shower also added that they did so “not regularly at all — I have only done this once or twice.” As an “almost every morning” sort of girl, Allie, I’m afraid you’re in the minority — 14 percent of respondents said they do it “most of the time.” And remember, that’s 14 percent of the 62 percent who say they’ve ever peed in shower. So really, barely 9 percent of Americans share your bathroom behavior.

Solace can be found in the possibility that some people, including those two friends of yours, are fibbing. Of course, the desire to appear “socially acceptable” is an issue with all self-reported surveys. But the fact that 42 percent of respondents in another YouGov survey (conducted just four months before this one) said shower urination was “unacceptable” could explain the large gap between people who say they have peed in the shower (62 percent) and those who say they do it every day (7 percent). If I thought my behavior was unacceptable, I might admit to having done it, but I’d also be keen to downplay how often.

One last thing: You say “as a female I find it liberating to pee at will.” I imagine that sense of liberation comes from the fact that non-toilet urination isn’t always so easy for women. The data shows clear differences between where men and women choose to pee — men are more likely to pee in public.

Women in the survey were half as likely as men to have peed in a bush and five times less likely to have peed on a residential street. The gender gap closes, though, in places like baths and showers, where more discretion is available. 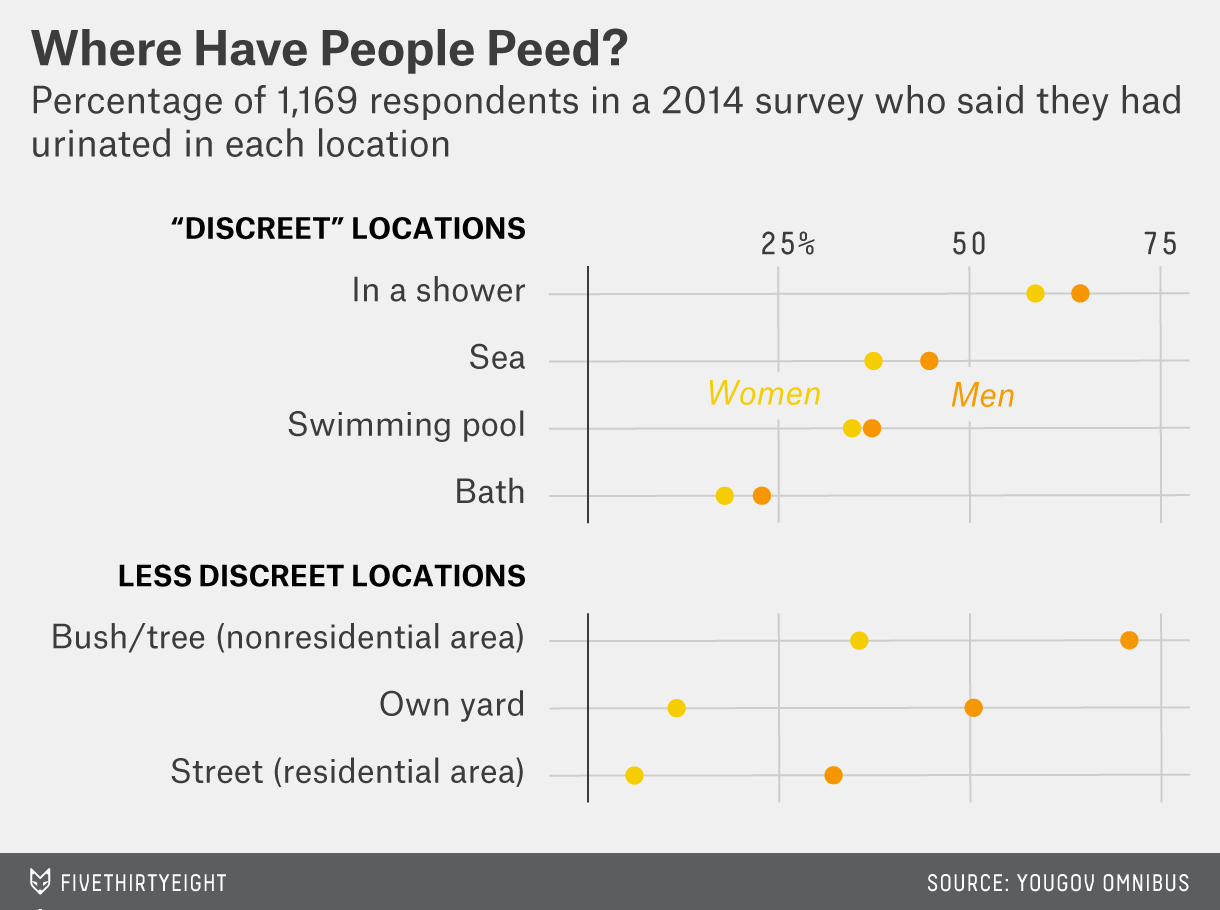 So, Allie, you’re pretty normal to have let yourself go in the shower (albeit slightly less normal for indulging quite so often). If you’re looking for time-saving and liberating options beyond the shower, might I suggest one of the female urination devices on the market, such as the She Wee or Whiz Freedom?