The GOP’s chances of winning the Senate are 68.5 percent, according to the FiveThirtyEight forecast, its highest figure of the year.

Among the 20 new polls released Thursday — it looks like there will be no Great Poll Shortage after all — two were principally responsible for Republican gains. The first was in Kentucky, where a SurveyUSA poll for the Louisville Courier-Journal had Republican incumbent Mitch McConnell ahead 48-43 over Democrat Alison Lundergan Grimes. The poll represented a shift from SurveyUSA’s previous two polls, which had a 1 percentage-point lead for McConnell and a 2-point lead for Grimes. With SurveyUSA (a highly rated pollster) now more in line with other polls of the state, we have a clearer story in Kentucky. It’s one that probably ends in a victory for McConnell, whose chances of winning are up to 87 percent.

The other poll was in Arkansas, which hasn’t been surveyed as often as other key Senate races. That poll, from the University of Arkansas, found Republican Tom Cotton up by 13 percentage points over Democratic Sen. Mark Pryor. No other poll of the state has shown Cotton with a double-digit lead, but he hasn’t trailed in a nonpartisan poll since Sept. 22. When the choice is between polls that show a candidate with a small lead and polls that show him with a large lead, he’s usually in good shape just a few days before Election Day.

Speaking of which, it’s not too early to look ahead to election night (along with our partners at ABC News, we’ll be covering everything; we hope you’ll join us). The number you’ll be hearing about all night is six — as in, Republicans need to net six seats from Democrats to win control of the Senate.

As we’ve pointed out before, the “net” part of that phrase is key. Republicans will have to win more than six Democratic-held seats if they lose a couple of their own. Their incumbent in Kansas, Sen. Pat Roberts, is only even-money to win re-election (although there’s a chance independent Greg Orman, even if he wins, could caucus with Republicans). The GOP candidate in Georgia, David Perdue, is ahead by only about 1 percentage point against Democrat Michelle Nunn, and that race could go to a runoff. McConnell is likely, but not certain, to survive.

More often than not, in fact, Republicans’ magic number will not be six seats. Instead, in more than 60 percent of our simulations the FiveThirtyEight model ran Thursday night, Democrats won at least one GOP-held seat. And about 20 percent of the time, they won at least two Republican seats. So the GOP’s magic number could be seven, eight or even nine seats instead.

Fortunately for Republicans, they have an abundance of Democratic targets. Running in order from the most likely to least likely pickups:

South Dakota looked competitive for a fleeting moment. But otherwise these races, red states where Democratic incumbents have retired, have been in the Republican column all year. The GOP is almost certain to win them, giving it a three-seat head start.

Pryor trails by 5 or 6 percentage points in the polling average. Few candidates have won a Senate election when trailing by that much so late in the race.

The Democratic incumbent, Mary Landrieu, also trails by about 5 percentage points — but those are in polls of the Louisiana’s probable Dec. 6 runoff against the Republican Bill Cassidy. She’s ahead in polls of Tuesday’s vote, when there are multiple Republican candidates on the ballot, although she’ll need a minor miracle to get to 50 percent and avert a runoff. Still, because of the runoff dynamic, this race can’t quite be placed into the same category as Arkansas yet.

The polls of Colorado have been subject to more debate than those in any other state. My colleague Harry Enten had a counter-critique last week of those who claim the Colorado polls are “skewed” against Democrats, but let me add just one other simple-minded observation: There are a heck of a lot of polls in Colorado. There have been 23 in October representing 18 distinct polling firms. Excluding polls from firms designated as partisan by Huffington Post Pollster, there have been 14 leads for Republican Cory Gardner compared to just 2 (each by a single point) for Democratic incumbent Mark Udall.

Udall can win. But his chances are inferior to Democrat Michael Bennet’s in 2010, who trailed by a slightly narrower margin in the polling average. And unlike in 2010, when Republicans nominated a problematic candidate in Ken Buck, the GOP has a fairly good one this year in Gardner. (The FiveThirtyEight fundamentals calculation, which doesn’t depend on polls, slightly favored Bennet in Colorado in 2010 but slightly favors Gardner this year.)

True, there’s not always a bright line between states where the polls would have to be wrong for the trailing candidate to prevail and those where it’s not as clear whom the polls have ahead. But Harry and I tend to think of Colorado as falling just toward one side of that line and Iowa just toward the other side.

A handful of recent polls in Iowa have the race tied or Democrat Bruce Braley up by a percentage point. More have Republican Joni Ernst ahead, but they’re not showing as large a lead for her as polls of Colorado are sometimes showing for Gardner.

Alaska is a more emphatic example of this distinction: It’s not clear who’s leading in the polls. Our polling average has Republican Dan Sullivan slightly ahead, and the fundamentals of the race and the state’s history of Republicans outperforming their polls also point his way. This race isn’t really “too close to call,” it’s “too uncertain to call.”

One backup option for Republicans is North Carolina, where GOP candidate Thom Tillis has gradually drawn closer in the polls against Democratic Sen. Kay Hagan. It still might be a case of too little, too late — especially in a state with lots of early voting — but Tillis’s chances of winning are at their highest point since early September.

The notoriously volatile University of New Hampshire poll gave Democrat Jeanne Shaheen an 8-point lead Thursday. She’s unlikely to win by that much — but if you want to discard it as an outlier, you should probably throw out the handful of polls that show Republican Scott Brown ahead, too. The consensus points to a narrow Shaheen lead. Brown has a chance, but our model shows it will mostly be in cases where Republicans are having a strong night nationally and New Hampshire is just one among many Democratic states to fall.

This is about it in terms of viable opportunities for the GOP. There are a few states (Michigan, Minnesota, New Mexico, Virginia) where our model gives Republicans between a 1 and a 4 percent chance of a pickup — but those would be once-a-decade type upsets, like John Engler winning Michigan’s gubernatorial race in 1990 when down by double digits in some polls. Republicans have plenty of more realistic options.

So, what about that tantalizing distinction I teased at before? Would the polls have to be “wrong” for Democrats to hold the Senate?

In my view, we’re not quite at that point yet. There is a reasonably clear consensus among nonpartisan pollsters about which candidate leads in Republicans’ easiest six pickups: Montana, South Dakota, West Virginia, Arkansas, Louisiana and Colorado. Indeed, the Republicans have about an 80 percent chance of winning at least six Democratic-held seats (not necessarily these ones exactly). 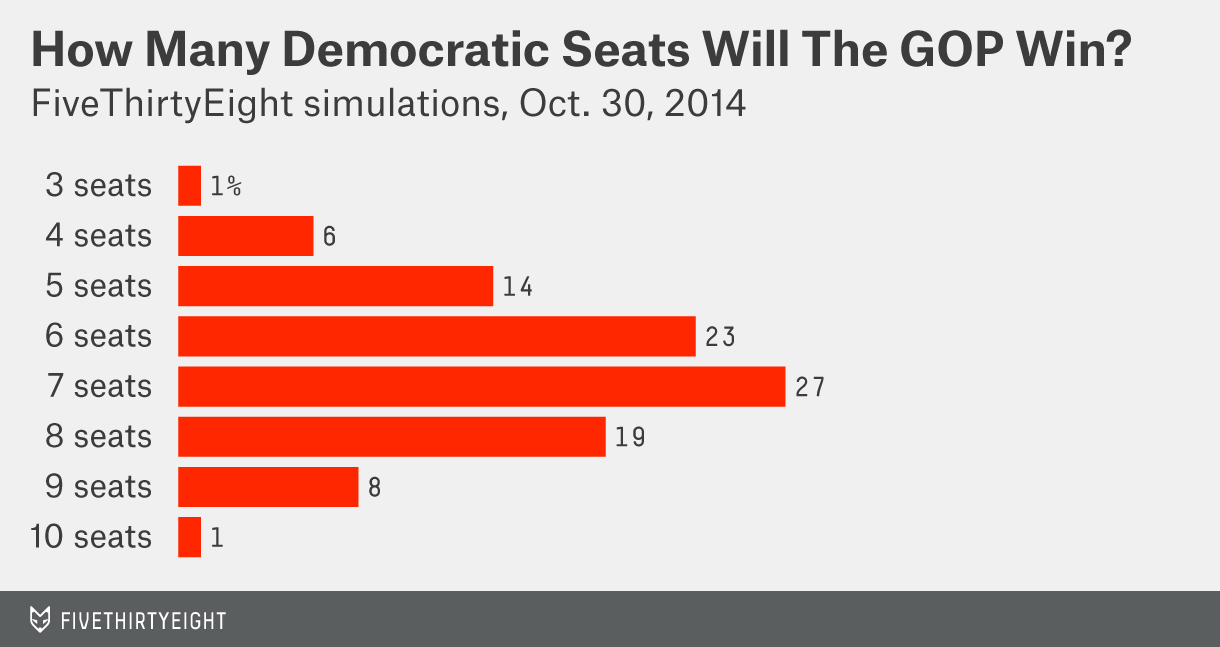 Again, the GOP’s magic number might not be six seats; the polling picture is murky in Georgia and Kansas. They might need seven or eight instead, which would require the party winning a state like Iowa or Alaska, where things are more uncertain.

Some of Democrats’ roughly 30 percent chance of holding the Senate represents these cases: where they win squeakers in a number of the closest races and Republicans fall just short of a majority. The other portion reflects cases where there is more of an across-the-board polling failure. This is plausible — sometimes almost all of the competitive races break in the same direction. But an anti-Republican “skew” is just as plausible, in which case Republicans could finish with 54 or 55 seats.

Which states to watch over this final weekend? I’d point to three: Alaska, Iowa and Kansas. Any polling at all in Alaska would be helpful. Iowa, depending on the final few polls there, could wind up anywhere from a true tossup to a case more like Colorado. In Kansas, Roberts’s position is improved from a few weeks ago, but it isn’t clear whether he’s gaining ground or has stalled out. In most of the other states, the possibility of a runoff limits how much the polls can tell us, or we have so much polling that no one further poll is going to move the needle that much. 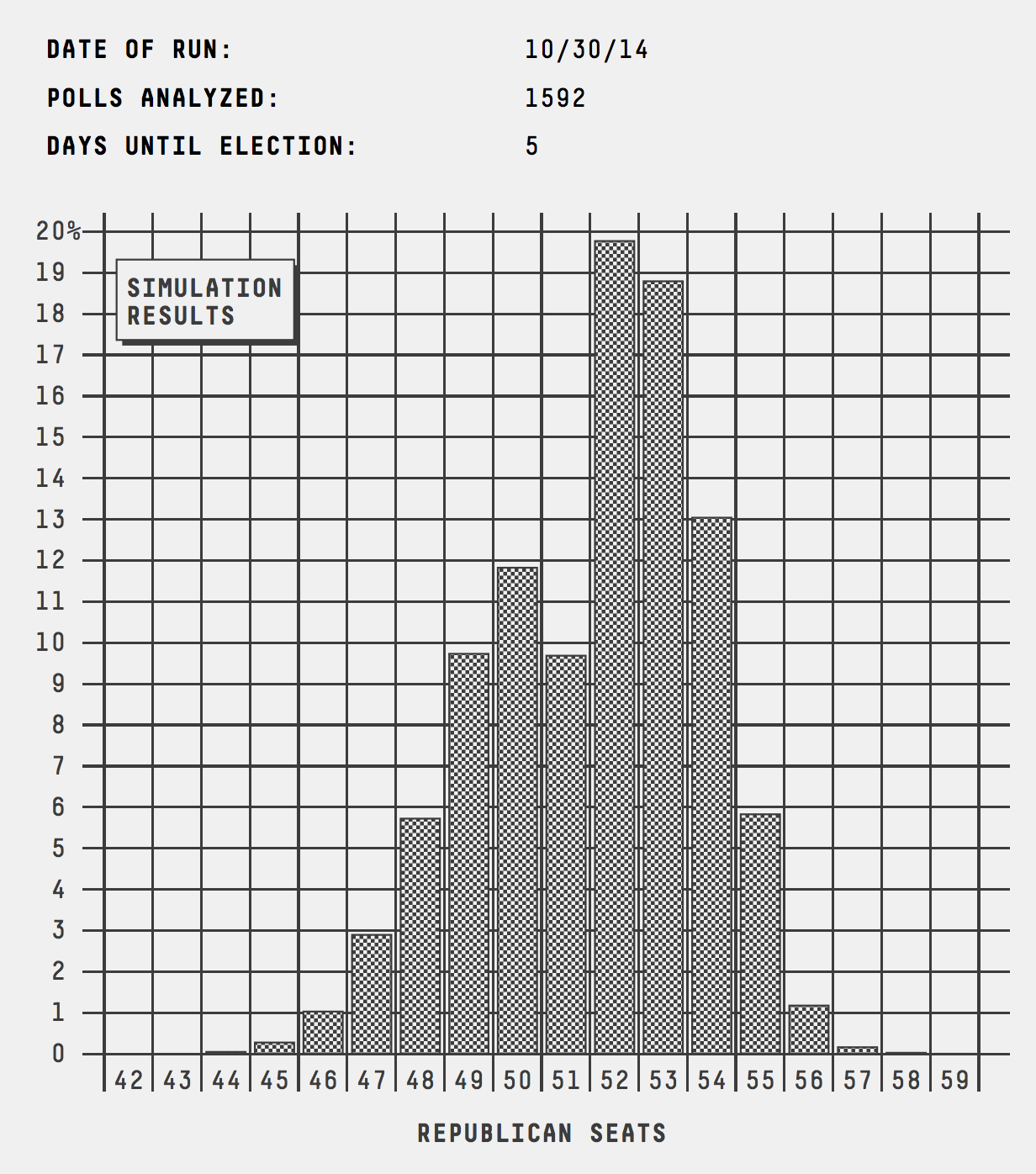