New Hampshire’s polling has been strange. Among polls released since Labor Day, eight have shown Democratic incumbent Sen. Jeanne Shaheen ahead by at least 5 percentage points. Three others — including a New England College poll released Tuesday — have shown narrow leads for Republican Scott Brown. Relatively few have been somewhere in the middle.

In my experience, it’s usually not a constructive use of one’s time to look for deeper meaning in these patterns. Over the long run, the distribution of polls in a state tends to form a bell curve around some mean. Over the short run, you may see weirder distributions. Randomness doesn’t always look random, especially over small samples.

Instead, take the macro view: Shaheen probably still holds the lead, but it has narrowed. (Before Labor Day, she hadn’t trailed in a single nonpartisan poll.) The FiveThirtyEight model puts Shaheen ahead by about 3 percentage points, compared with about 5 points when we launched our forecast in September.

Yep, time for another sports analogy. Say an NFL team leads 17-7 and has the ball at its own 20-yard line to start the third quarter. Its win probability is 83 percent. The third quarter is a bit wild, but the same team leads 27-20 at the end of it. Although its lead has narrowed, its win probability will have barely budged (it’s about 81 percent at the start of the fourth quarter) because there’s less time for the trailing team to complete a comeback.

In general, this dynamic helps the GOP because it holds leads in enough states to be the overall favorites in the race for Senate control. If the election were held today instead of in three weeks, the FiveThirtyEight model would have Republicans as about 2-to-1 favorites to win the Senate — instead of 60 percent. So the GOP’s win probability will gradually increase each day unless Democrats start catching up.

But this phenomenon hurts Republicans in the handful of competitive states where they trail. Like Brown in New Hampshire, Republican Thom Tillis has probably narrowed his deficit in North Carolina against Democratic incumbent Sen. Kay Hagan. But he still trails in the vast majority of recent polls, and his time is running short in a state with a fair amount of early voting.

Still, North Carolina and New Hampshire are by no means locks for Democrats. Republicans could still win them, especially if they’re having a strong night overall.

One difference between FiveThirtyEight’s forecast and most other models is that we tend to assume a higher degree of correlation between the various races. This yields a wider spread of potential outcomes.

As compared with the Huffington Post’s model, for instance (which I generally think is nicely designed), FiveThirtyEight’s model currently gives Republicans slightly lower odds of capturing a majority (60 percent versus 66 percent). But our model has Republicans with a slightly higher probability — 16 percent rather 10 percent — of finishing with at least 54 seats, which would almost certainly require them to win New Hampshire or North Carolina. 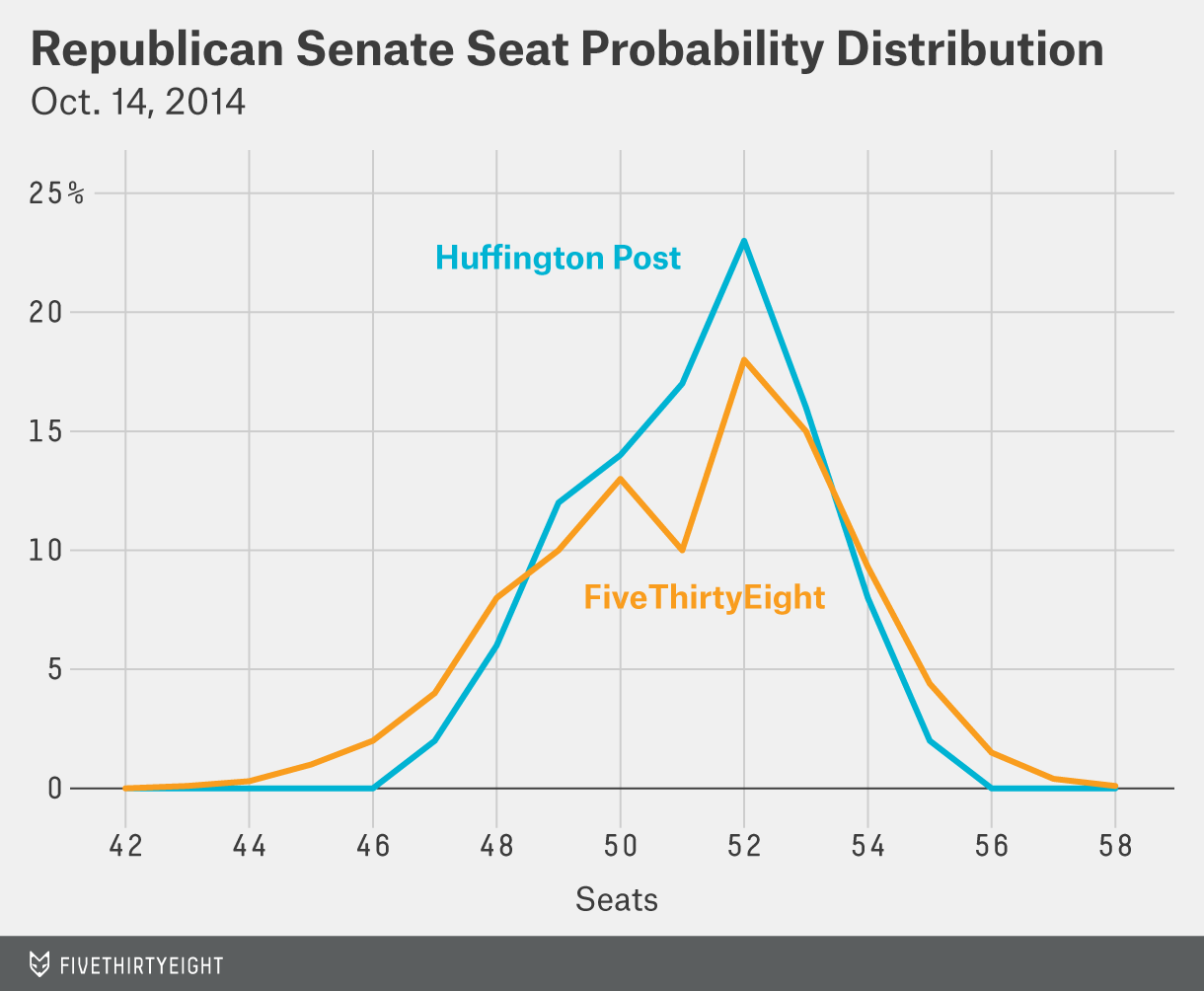 So even though there’s not much time left, the polls could still break toward one party in the final three weeks of the campaign — or there could be a systematic error in the polls on Election Day. Does that mean the polls might be “skewed”? More about that Wednesday. 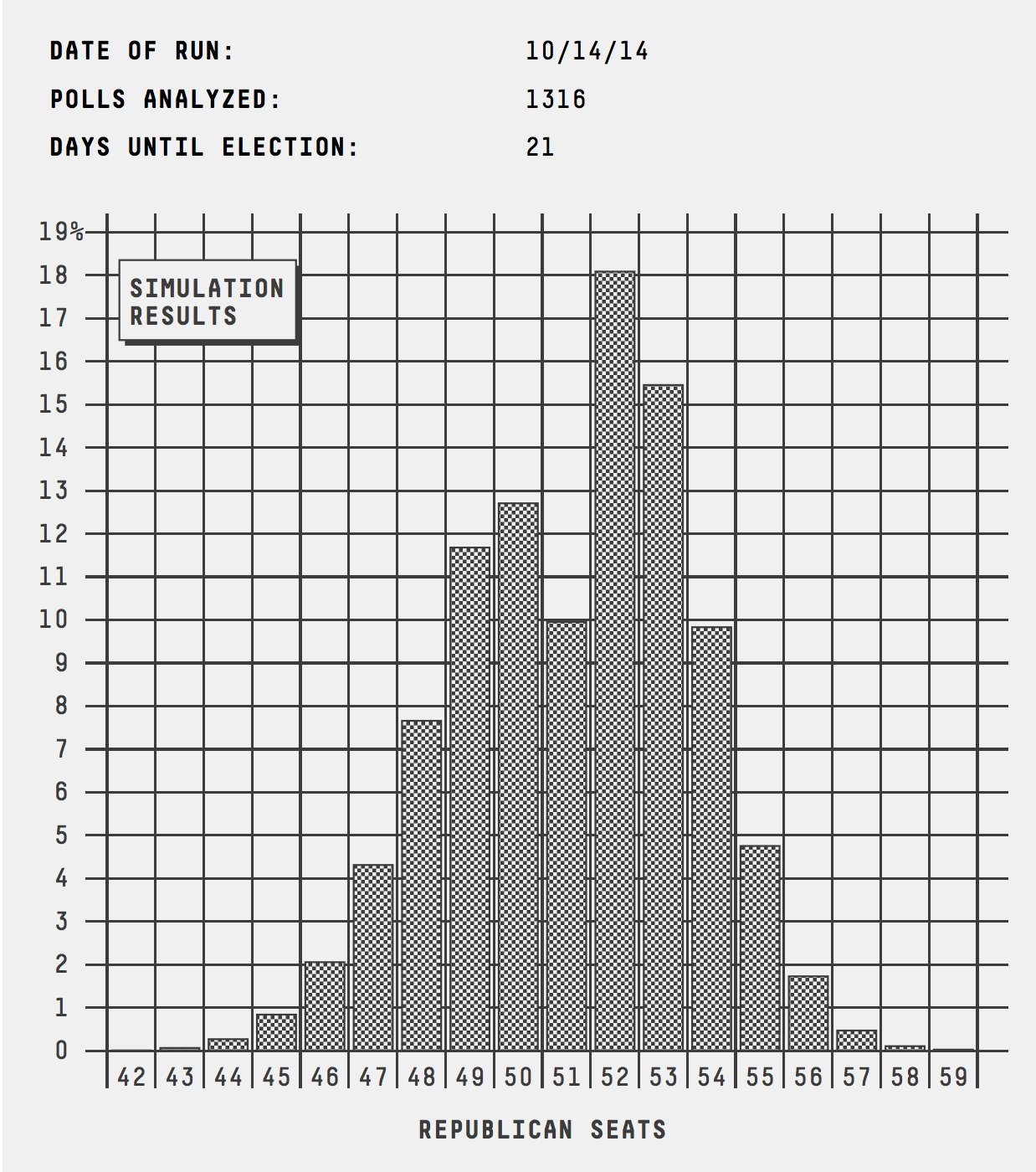