It’s natural to group Senate races based on which party controls the seat in the current Congress. The math seems easy enough. If Republicans win six seats held by Democrats without losing any seats of their own, they’ll take control of the Senate.

But this view both oversimplifies and overcomplicates the Senate landscape. It oversimplifies it because the contingency in the sentence above — “without losing any seats of their own” — is a huge assumption. Republicans are more likely than not to lose at least one of their seats. In 56 percent of the simulations the FiveThirtyEight Senate model ran Thursday morning, the GOP lost at least one seat it controls (usually Kansas, Georgia or Kentucky).

Meanwhile, the view overcomplicates the issue because a loss hurts exactly as much whichever party held the seat previously. If Mitch McConnell loses in Kentucky, that will count against Republicans just as much as if they fail to pick off Alaska.

Here’s a different way to think about the math.

Republicans need 51 seats to take control of the Senate.

There are 30 seats held by Republicans that are not up for election this year.

There are 15 more seats that are being contested but which Republicans have at least a 90 percent chance of winning, according to our forecast. These are mostly races with Republican incumbents, but they also include three seats — Montana, South Dakota and West Virginia — held by Democrats. South Dakota is less certain than the others because of independent candidate Larry Pressler — but Pressler, a former Republican, might caucus with the GOP if he wins.

That gets Republicans to 45 seats. They need six more.

Fortunately for the GOP, there are six races that lean toward Republicans: Alaska, Arkansas, Georgia, Iowa, Kentucky and Louisiana. We’ll refer to these states as the “Maroon 6” (because maroon is somewhere between red and purple). In each Maroon 6 state, the Republican candidate has a 65 percent to 75 percent chance of winning, according to the FiveThirtyEight forecast.

This might seem like a flush situation for the GOP. All it needs is to win those races for which they are ahead in the polls. If it does, it won’t need to worry about Kansas, where the independent Greg Orman is favored. And Republicans won’t need to win Colorado, where they have good chances but which is closer to being a tossup.

The problem is that although Republicans are favored in each individual race, it will be hard for them to go six for six. I know we can get obsessed with sports analogies, but another one is helpful here. The Seattle Seahawks are the best team in the NFL and will be favored in just about every game they play for the rest of the season. But it’s very unlikely that they’ll sweep all 12 remaining games to finish their season at 15-1. Sooner or later, Russell Wilson will throw a late interception or Steven Hauschka will miss a field goal or some opposition running back will have the game of his life — and Seattle will be upset. Similarly, it’s likely that one of the Democrats in the Maroon 6 states will find a way to win.

One complication is the outcome in each Senate race is not independent from the next one. If Republicans outperform their polls in Arkansas, for example, they’ll also be more likely to do in Alaska. Indeed, there have been years in which all or almost all of the competitive races broke in one direction.

But that still means the GOP is an underdog to win all six states. The correlation in Senate outcomes is much less pronounced than in presidential races, where the same two candidates are on the ballot in each state. And the Maroon 6 are a fairly diverse group. They include states with a Republican incumbent, a Democratic incumbent and no incumbent. They include two races (Louisiana and Georgia) that might require a runoff. They include lots of very red states but also Iowa, won by President Obama in 2012. They include Alaska, which presents polling challenges.

What if Republicans win five of the Maroon 6 instead? They’d still be in good shape, winning the Senate 84 percent of the time. Most likely this would be by winning either Kansas or Colorado. 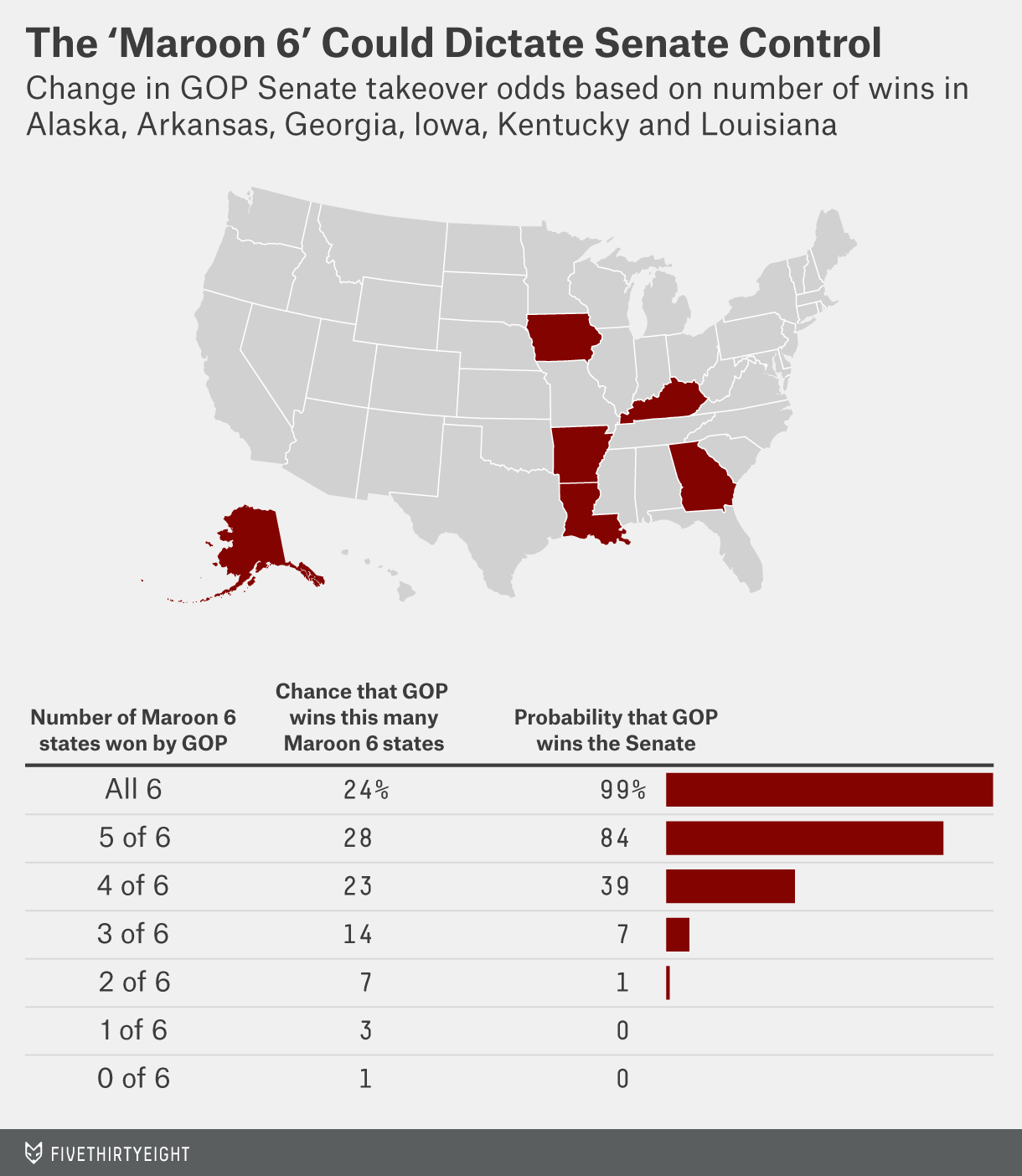 Win four of the six seats, however, and Republicans’ chances of winning the Senate fall drastically — to 39 percent. They’d probably need to win Kansas and Colorado.

And win just three of the six, and Republicans would face long odds. They’d not only have to win Kansas and Colorado, but also North Carolina or New Hampshire, where almost every recent poll has shown the Democrat ahead.

While Republicans have allowed Georgia and Kentucky to remain in play, Democrats have done a better job of locking up their “leaning” states. There have been a lot of recent days when Republicans got a good poll in a high-profile state like Iowa, but when our overall Senate forecast didn’t move toward them because Democrats got a good one in New Hampshire, North Carolina or Michigan. Republicans retain some chance in North Carolina, where the polls have shown a consistent but small lead for the Democratic incumbent Kay Hagan. But Michigan is almost certainly lost to them (the national party is pulling out of the race), and New Hampshire may be on its way there.

This makes a big difference: It means that Republicans’ position has not become analogous to the rich one that Obama had against Mitt Romney in 2012. Obama had hundreds of plausible paths to an electoral majority through various swing states — while almost every swing state was a “must win” for Romney. This year, Republicans have one very promising path — through the Maroon 6 states — and some good backup options by winning Colorado or retaining Kansas. But there’s not a lot beyond that.

The GOP’s situation isn’t bad by any means. But our program, which runs through all these permutations, still has the Democrats clawing their way to victory 43 percent of the time.