Most of the time you read “competitive Senate race” in 2014, you’re reading about states such as Iowa and Colorado.

Yet I have to remind myself not to forget about other Senate races that don’t get nearly as much attention as perhaps they should. On Monday, a SurveyUSA poll was released in Kentucky that showed Democrat Alison Lundergan Grimes leading Republican Sen. Mitch McConnell 46 percent to 44 percent.

It was Grimes’s first lead in a non-campaign-sponsored poll since June, and FiveThirtyEight’s forecast still gives McConnell a little better than a 77 percent chance of winning. Most people aren’t looking at Kentucky as a place where the Senate will be decided. Nor are many people looking at Georgia, where Republican David Perdue is a 71 percent favorite to beat Democrat Michelle Nunn.

But consider the chances of a Republican victory in races more often placed in the middle of the 2014 board. FiveThirtyEight has the Republican candidates in Alaska, Arkansas and Louisiana holding between a 72 percent and 75 percent chance of winning — the same range as Georgia and Kentucky.

Georgia and Kentucky remaining on the table for Democrats significantly hurts Republicans’ overall chances of winning a Senate majority. If the political gods granted Republicans those two states today, the chance of Republicans holding at least 51 seats in the next Senate would shoot up to 68 percent from the 58 percent chance they have in Monday’s forecast. That’s a greater change in the forecast than if the gods gave Democrats Michigan, Minnesota and New Hampshire. Republicans would still be slight favorites in such a scenario, down to a 53 percent chance of winning a majority — a sign of the current uncompetitiveness of those states.

This 10 percentage-point difference is also larger than if we were to give Iowa to the GOP. If Republican Joni Ernst were guaranteed to win in Iowa, the chance of a Republican takeover of the Senate would rise to 65 percent.

Ernst is the favorite. Of the 11 non-campaign sponsored polls taken over the past month, she has led in five (including in a new Magellan survey by 9 percentage points), trailed in three and been tied in three (counting a new Loras College poll which had Ernst up 0.3 percentage points). Her average lead in these polls is 2.1 percentage points, and the model gives her about a 65 percent chance of winning.

Yes, Iowa, Colorado and the other states you hear about most often are important. But don’t forget about Georgia and Kentucky.

Finally, let’s go to today’s edition of “A Probabilist Equivalent From The Sports World.™” The GOP’s current chances of taking the Senate, 57.6 percent, are the same exact chances the New England Patriots had of winning Super Bowl XLVI against the New York Giants with eight seconds left in the first half. The Patriots, up 10-9, had just kicked off to the Giants, and at that moment, Pro-Football-Reference.com gave the Patriots, who were going to receive the second-half kick, a 57.6 chance of winning. To take this another step, giving the GOP Kentucky and Georgia would be the equivalent of giving the Patriots an extra three points at that point in the game. 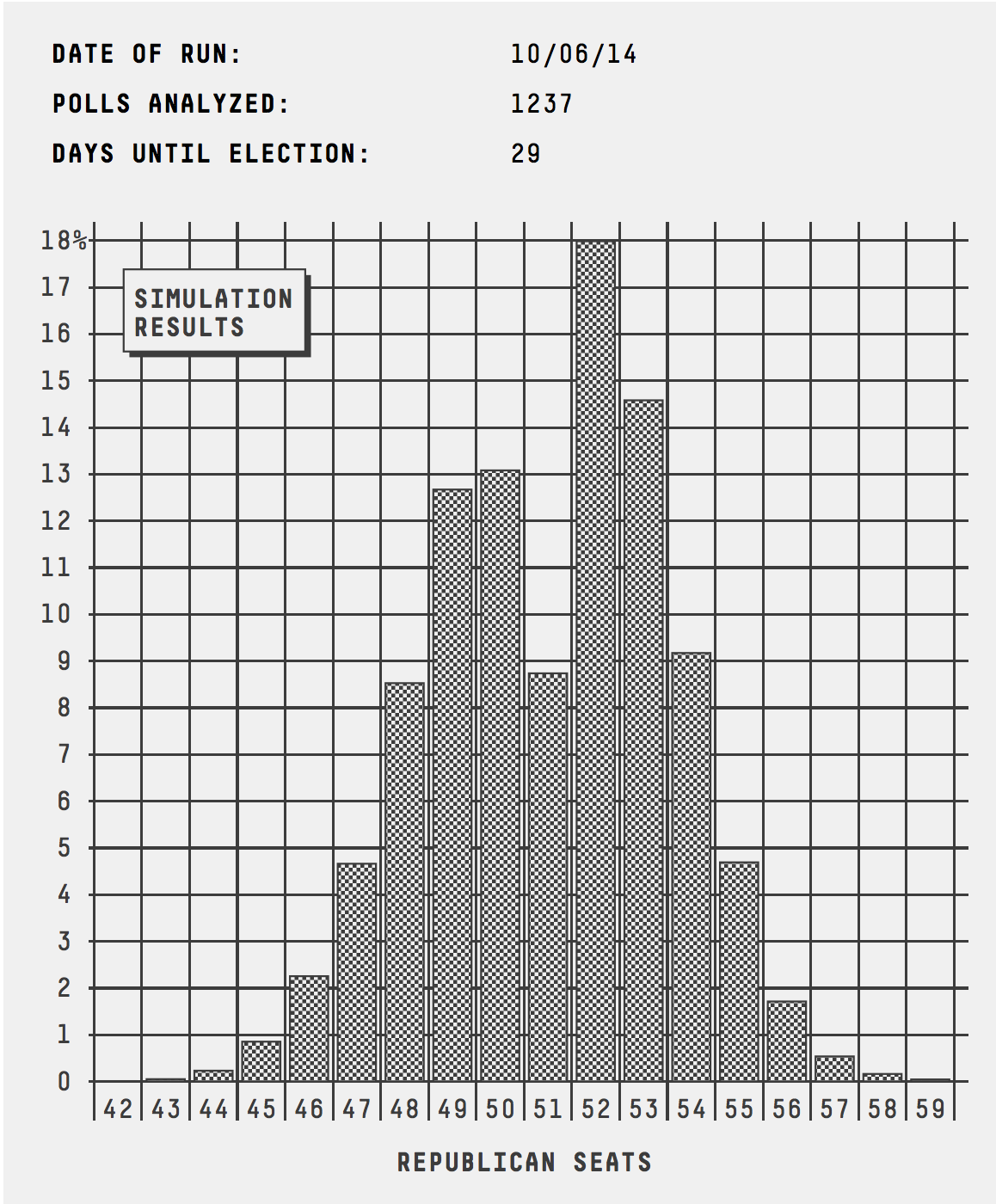