If you’ve revisited our Senate forecast landing page, you may have noticed something a little different. The probability distribution showing how many Senate seats the Republicans might end up with is no longer a nice bell-shape–type curve. Instead, it has a kink. 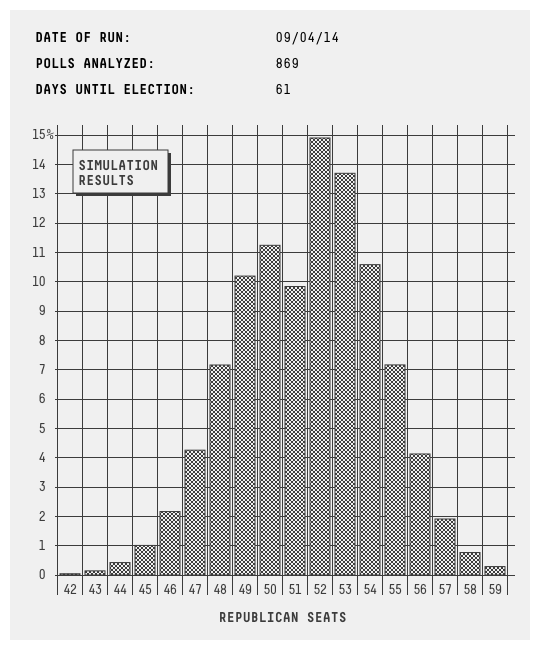 What’s going on here? Why are Republicans more likely to end up with 50 or 52 seats than 51?

The reason has to do with the independent candidate in Kansas, Greg Orman, and which party he’s said he’ll caucus with should he win his election against the Republican incumbent, Pat Roberts. An Orman victory looks like a much more realistic prospect now that the Democratic candidate, Chad Taylor, has ended his campaign (although the Kansas secretary of state said Taylor cannot formally remove his name from the ballot). This is an extremely difficult race to forecast, but pending further information, our model gives Orman about a 45 percent chance of winning.

Orman has said that “if one party is clearly in the majority,” he will “seek to caucus with the party that was in the majority as that would be in the best interest for the state of Kansas.” In other words, his decision is contingent on how the other Senate races go.

The kink in the graph is the result of Orman potentially giving a party a “bonus” senator should it reach a majority without him. For example, if Republicans finish at 50 seats without Kansas, Orman might not join them. But at 51, he would, which would bring them up to 52.

What about that instance where Republicans are stuck on exactly 50 seats without Orman, while Democrats are at 49? In that case, Orman’s decision would determine Senate control. If he joined the Democrats, the Senate would be split 50-50 and Democrats would represent the majority party because of the tiebreaking vote of Vice President Joe Biden. If he joined the Republicans, they’d control the Senate 51-49.

Our assumption is that there’s a 75 percent chance Orman will caucus with the Democrats should that situation arise. This is similar to the assumption we made for King two years ago. Like King, Orman rates as left of center by the various ideology measures we track. His stated policy positions are similar to those of a moderate, red-state Democrat; he’s said he believes “in Second Amendment rights of Americans to keep and bear arms,” but he also advocates an amnesty program for undocumented immigrants and supports abortion rights. Orman was formerly a member of the Democratic Party, having run briefly for Senate as a Democrat in 2008. Most of his campaign contributions have been to Democrats, although he also gave to Scott Brown, the moderate Republican Senate candidate, in 2010. And Taylor, the Democrat, is seeking to leave the campaign to clear the way for him.

Weighing against these considerations is that Orman, unlike King, would be representing a red state — and that he’d be entering the Senate in a year which Democrats had lost a number of seats, perhaps conveying the sense that Republicans had more of a mandate to govern. We think the evidence lines up more on the side of Orman caucusing with the Democrats, but it isn’t a sure thing.

There are also more complicated permutations. King, for instance, has said he may switch to caucusing with Republicans should they win a majority. And sometimes, as after the 1994 and 2008 elections, a party may pull in a few party-switchers from the opposition after it has a strong election. We consider these scenarios to be beyond the scope of our election model. Our forecast assumes, in other words, that the 64 senators who are not on the ballot this year will keep caucusing with the same party.

There are independent candidates in several other states, although few have realistic chances of winning. Our forecast model gives about a 4 percent chance to Larry Pressler, the former Republican senator who is running as an independent in South Dakota. Pressler has also not said who he would caucus with, but we assume there’s a 75 percent chance he would return to the Republican Party if he wins. Other independents are treated by the model as having a 50-50 chance of caucusing with either party; we’ll examine their cases in more depth if it looks like they have viable chances of winning.

Overall, while the news from Kansas is favorable for Democrats, it doesn’t make all that much difference to the bottom line. Democrats have about a 37 percent chance of retaining the Senate majority, up from 35 percent in our forecast late Wednesday afternoon.

Remember, Roberts was not sure to win before — our model had given him a 20 percent chance of losing to either Taylor or Orman before Taylor exited the race — and he’s not sure to lose now. And even if Orman wins, he may caucus with Republicans after all. Furthermore, Republicans have a robust Senate map. Even if they need to gain seven seats rather than six because the seat in Kansas flips, they have any number of pathways toward doing so.