For the United States, almost every recent World Cup match has been billed as the most important game in the history of the men’s national team. Its knockout-stage match against Belgium on Tuesday isn’t receiving quite as much hype.1 But a win would advance the U.S. to the World Cup quarterfinals for a Saturday afternoon match against Argentina or Switzerland. That would probably be the most-watched game in U.S. soccer history — the first World Cup quarterfinal that many American fans would ever see their men play live.2

It’s tempting to say that these matches are the soccer equivalent of political “game changers” — much-ballyhooed events that seem exciting at the time but which rarely have as much lasting impact as the pundits claim. But it’s not unreasonable to feel as though every World Cup game is more important than the last. It’s a consequence of the long-term state of U.S. soccer.

On the one hand, expectations are getting higher. The U.S. advanced from the group stage in 1994, 2002, 2010 and now 2014. Matches against England or Portugal or Germany are now thought of as opportunities rather than sure losses. On the other hand, the men’s national team has never quite had its breakthrough moment.

When might the bar be raised? When might U.S. fans view a Round of 16 exit as a travesty and not a triumph?

If you’re in your mid-30s, like me, the advance of the U.S. men’s national team might seem as inevitable as that of gay marriage. You’ll be just old enough to remember that the U.S. was once a soccer backwater. But you might not remember how long it took the Americans to get where they are today. The trajectory since the 1980s has always been upward: 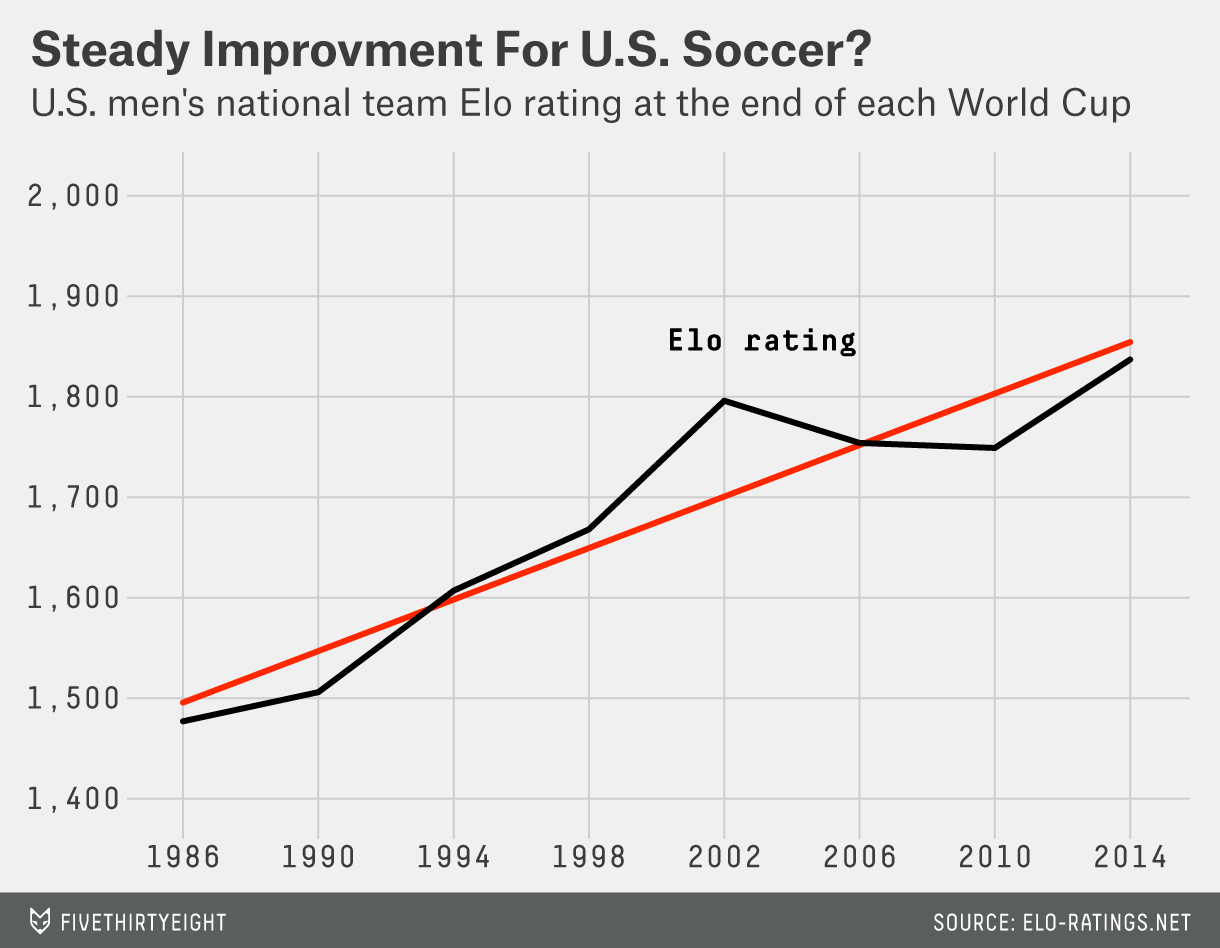 This chart shows the Elo rating for the U.S. in each World Cup year3 since 1986 — the last World Cup where the Americans failed to qualify, and the last one before 1988, when FIFA declared the 1994 World Cup would be played in the U.S.

From this perspective, the upward trend has been extremely steady. In fact, other than the 2002 team arriving in the quarterfinals a little ahead of schedule, it’s been almost perfectly linear. Since 1986, the U.S.’s Elo rating has improved by almost exactly 50 points every four years.

Imagine that the trend continues. Right now, the U.S. team’s Elo rating is nearly 1,850, which places it 15th in the world. Add another 50 points, and by 2018 it would be at 1,900 — somewhere around eighth or 10th in the world and near where Belgium and Uruguay and France are today. That’s a team that could be a dark-horse World Cup contender. By 2026, its Elo rating would be 2,000 — not far from where Argentina, Germany and the Netherlands began this year’s tournament. So in just 12 more years — in a World Cup that could possibly be held in the United States — the U.S. will be a global soccer powerhouse.

Or perhaps not. Consider another look at the evidence, one where we run the numbers back further. For much of the 1970s, there was a lot of hope surrounding the growth of U.S. soccer, but the men’s national team repeatedly failed to qualify for the World Cup. In one year, the U.S. failed to win a single qualifying match. But let’s go back ever further, to 1950. This tells a different story. The men’s national team got worse from 1950 to 1958, bottomed out for almost 30 years with no sign of life, improved rather sharply in a concentrated period from 1986 through 2002, and has been fairly steady since. 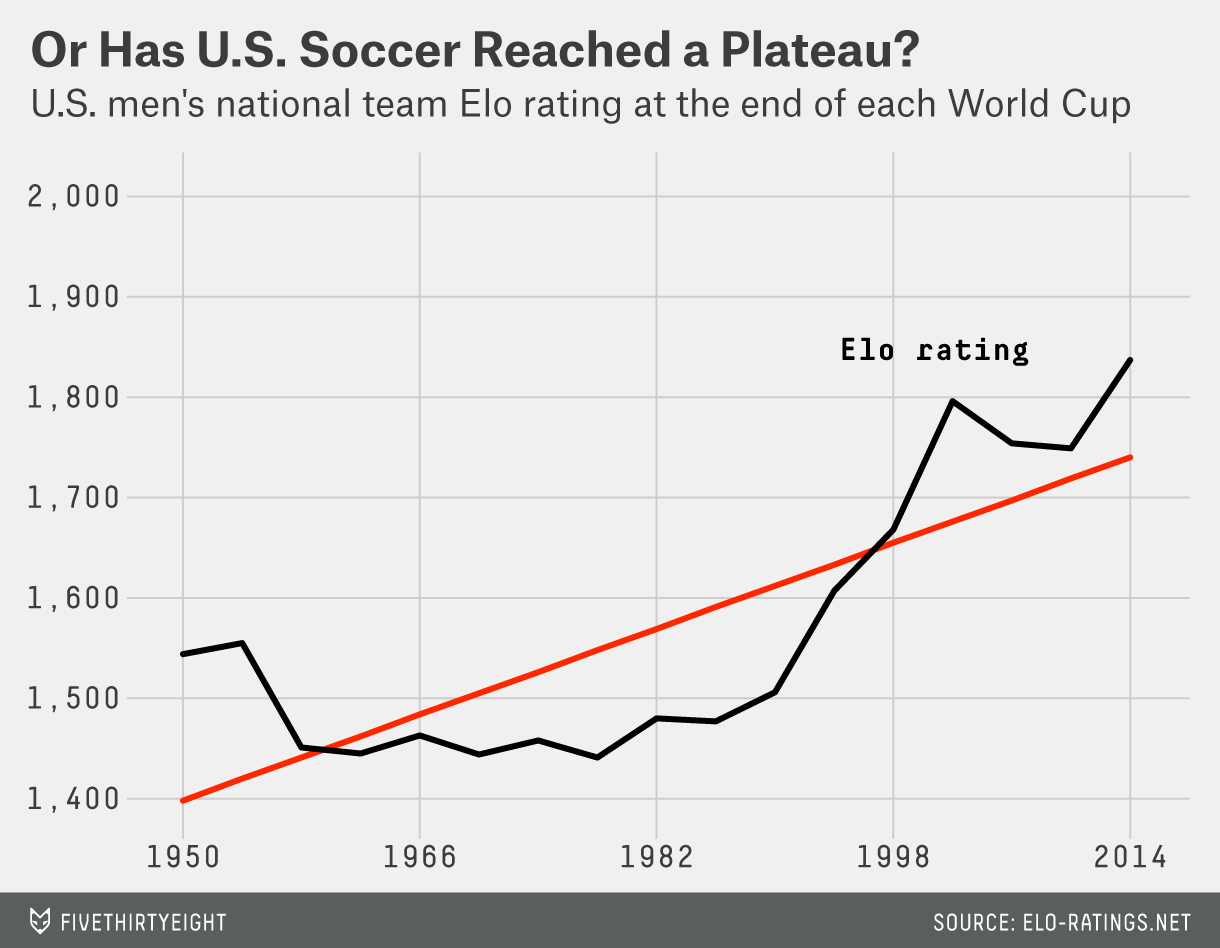 Yes, the U.S. has still gotten better by this reckoning — but it looks more like a case of punctuated equilibrium — a sudden change after years of stasis.4 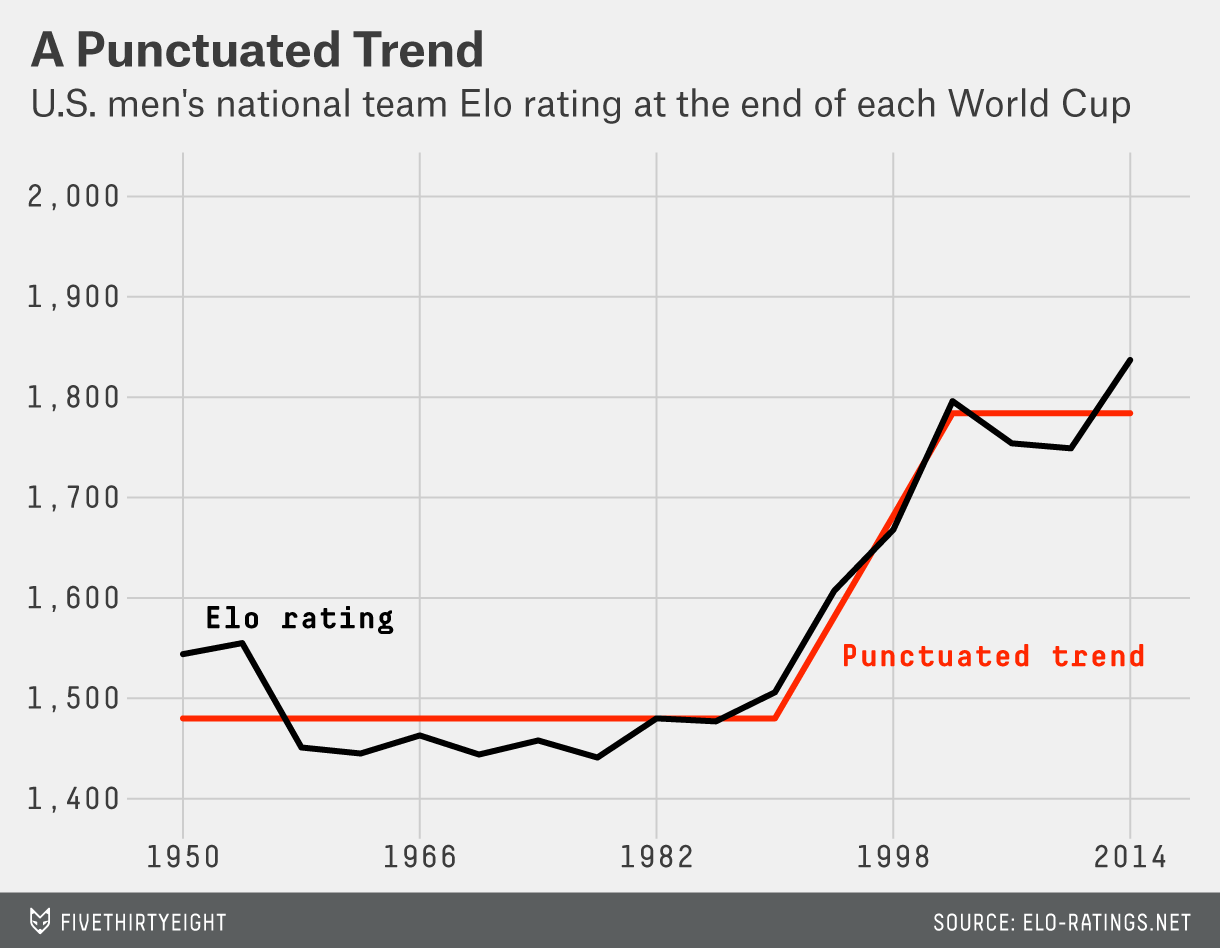 This view suggests the U.S. may have reached a new plateau. The performance of the 2002 team, for instance, is problematic from this vantage point. If the U.S. fails to beat Belgium on Tuesday, that means it will have gone three World Cups without equaling (much less improving upon) the 2002 team’s performance. Perhaps we’re left with the global soccer equivalent of the Atlanta Hawks: a team that will usually make the “playoffs” then lose in the first round.

This might seem like a contrived reading of the evidence. But mapping the Americans’ trajectory from 1986 onward is also selective: It’s easy to make an upward pattern look more impressive by starting from what you know to be a low point.

There’s a credible story behind each theory. Under the steady-improvement theory, the story is one of demographic and cultural trends abetted by some measure of self-perpetuating success (a positive feedback loop). Soccer has been a big youth-participation sport since the 1970s, but immigration from Latin America may be giving the U.S. even more young athletes who are interested in soccer. The occasional successes of the U.S. men’s national team, along with an increasingly popular domestic league (and improved television visibility for the English Premier League and Liga MX) may motivate some of these young athletes to play soccer professionally instead of transitioning into baseball, football or another sport.

The punctuated-equilibrium theory suggests that the U.S. was badly underachieving its soccer potential for many years. Then it got its act together when it was chosen to host a World Cup: better facilities, more investment in the national team, a sustainable domestic league and so forth. But it was picking low-hanging fruit. It shouldn’t be that difficult for a super-wealthy country like the United States, which excels at so many other sports, to be half-decent at soccer if it tries.

What’s more challenging is going from a country that sometimes makes the knockout phase to one that sometimes makes the World Cup semifinals — or beyond. It’s not clear that the U.S.’s wealth, or its athletic prowess, implies that it ought to be much more successful at soccer than it has been in recent years. For instance, we can compare each country’s GDP (taken as a natural logarithm) against its soccer team’s Elo rating as of June. There’s certainly some relationship, but it’s rough (soccer is a comparatively inexpensive sport). The trendline in the chart implies that a best guess for the United States is an Elo rating somewhere in mid-1,800s, almost exactly where it is today. 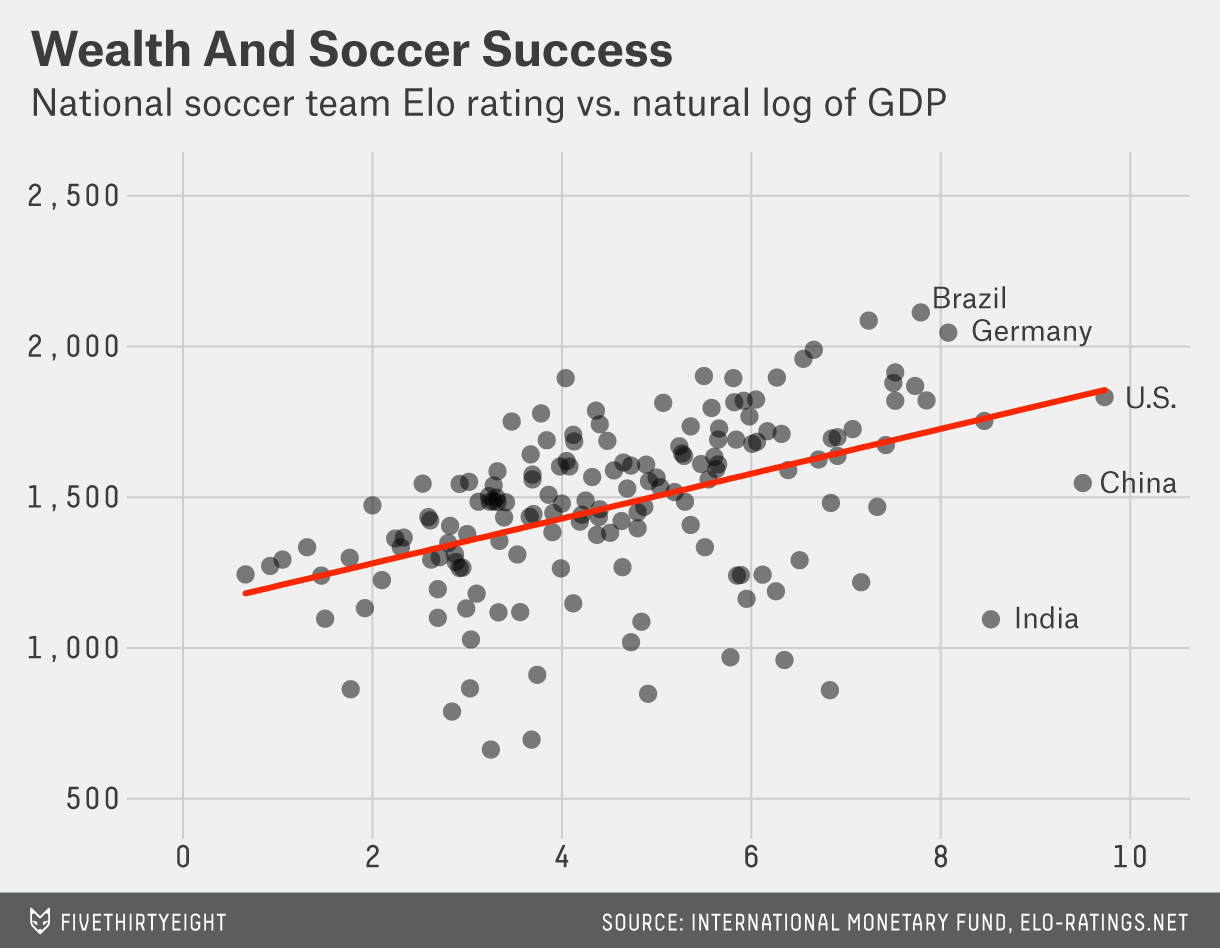 The same story holds if we compare the number of medals each country has won at the Summer Olympics since 2000 (again taken as a natural logarithm5) against its soccer team’s Elo rating. 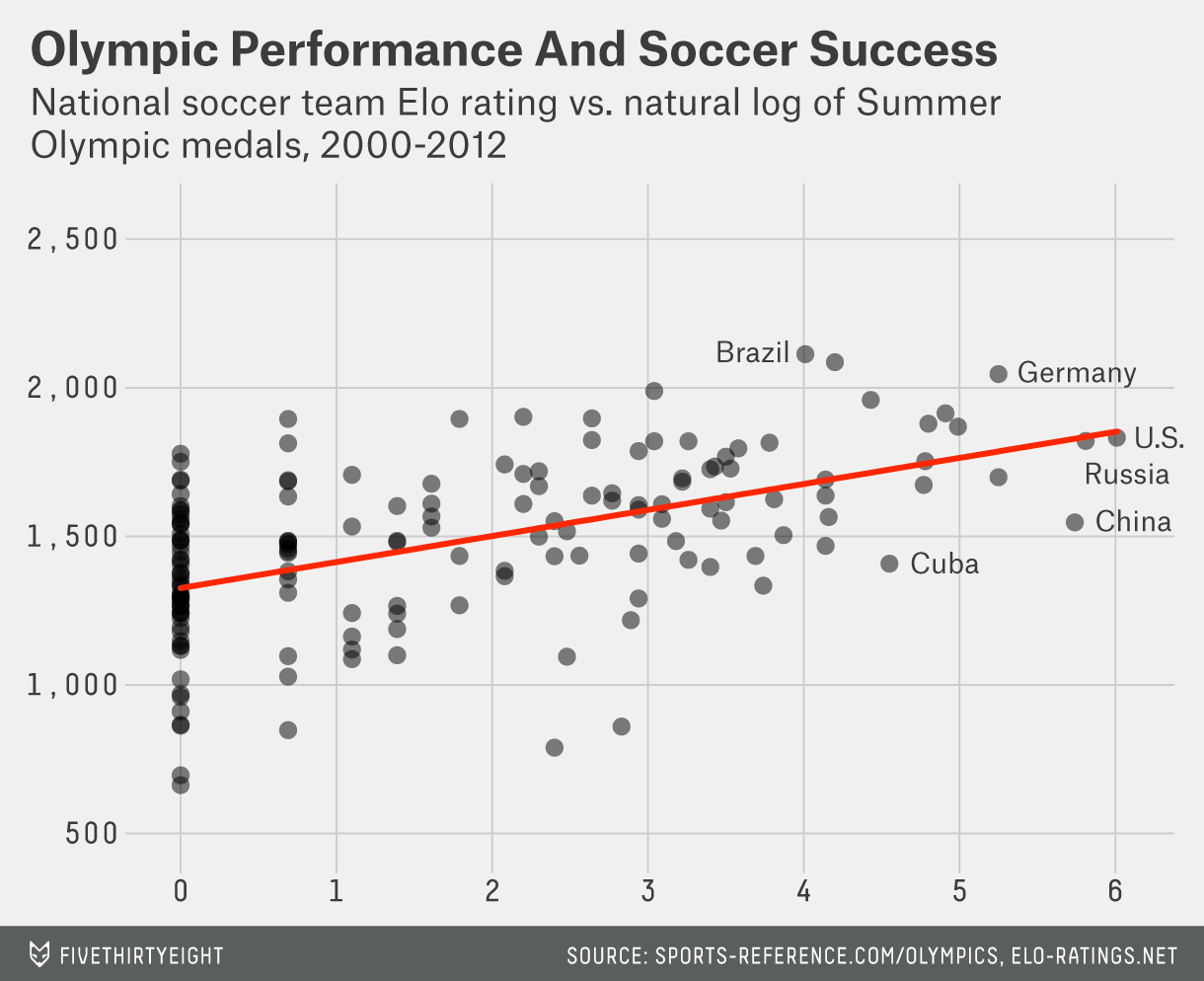 There’s a high margin of error on these estimates. China’s GDP (and its Olympic medal count) is just a little less than the United States’ — but its soccer team has qualified for only one World Cup and has gotten worse in recent years. Germany also has a big economy and a big medal count — and its soccer team is great. The point is that the U.S. men’s national team is no longer underachieving reasonable expectations, as it was before the 1990s. Nor is it exceeding them. Perhaps what we’ve seen is about what we’re due to get in a populous, wealthy, athletic country — where interest in soccer is average, at best, by global standards.

The success of the U.S. women’s national soccer team stands in contrast to that of the men’s. But soccer players are among the highest-profile female athletes in the U.S., suggesting that part of the problem for the men’s side is competition from other sports.

The punctuated-equilibrium theory would imply that it may take some time for the U.S. men’s team to reach the next plateau. Perhaps an external catalyst would help: another American World Cup, a run to the World Cup semifinals, the emergence of an American soccer player who is recognized as among the best in the world. (Personally, I’d hope for him to be as brash as Cristiano Ronaldo, the better to spark headlines and stoke rivalries with other countries.) But it could be a long while before any of those things happen, and there could be some further delay before their feedback effects kick in.

Or it could be that the steady-improvement theory is right. It also reflects a reasonable interpretation of the evidence. The data on youth interest in soccer is very encouraging, for instance.

Tuesday’s game against Belgium will provide us with one data point — but just one. Unlike in the past, however, we might not need to wait four years for the next one. Instead, in 2016, the United States will host the Copa América Centenario, a special one-off tournament that will feature the best teams from both North and South America. It could serve as a preview of our soccer future. Playing at home produces the equivalent of an 100 Elo-point bonus — equal to eight years of improvement for the U.S. based on its 1986 to 2014 trajectory. If the U.S. will be ready to compete with the Colombias and Argentinas and Brazils of the world on neutral turf by 2022 and 2026, it should be able to do so on home soil in 2016.

CORRECTION (July 1, 4:54 p.m.): A chart in an earlier version of this post mislabeled the Elo ratings vs. Olympic medal counts for China and Russia. The chart has been updated.