After its loss to Germany, the U.S. finished tied for second in Group G, with one win, one loss and one draw. Portugal had the same record. But the U.S. had the better goal differential and will go on, reaching the knockout stage in consecutive World Cups for the first time in its history.

Some further good news for the U.S. is that it has a palatable draw in its Round of 16 game. If the U.S. gets very lucky and Algeria and South Korea win their games Thursday, its opponent would be Algeria. However, there is only a 3.5 percent chance of both of those outcomes. In any other case, the U.S. will face Belgium.

The U.S. will be an underdog against Belgium, but not as badly as it would be against some other opponents. If we put the remaining World Cup teams into several tiers based on their Soccer Power Index (SPI) ratings, it would look something like this:

Tier 1A: Brazil (partly because of home-country advantage)

Belgium is dangerous, but not as dangerous as tournament favorites Brazil, Germany and Argentina. Meanwhile, the Netherlands, France, Chile and Colombia also look more threatening than Belgium based on the things SPI looks at: pre-tournament resumes, form so far in the World Cup and, in the case of Chile and Colombia, games closer to home.

Our match-prediction algorithm gives the U.S. about a 42 percent chance of winning a knockout-stage game against Belgium based on each team’s SPI rating as of Thursday morning. (The U.S. would be 59 percent favorites against Algeria.) Here’s how those probabilities look for a knockout match between the U.S. and all remaining teams in the World Cup: 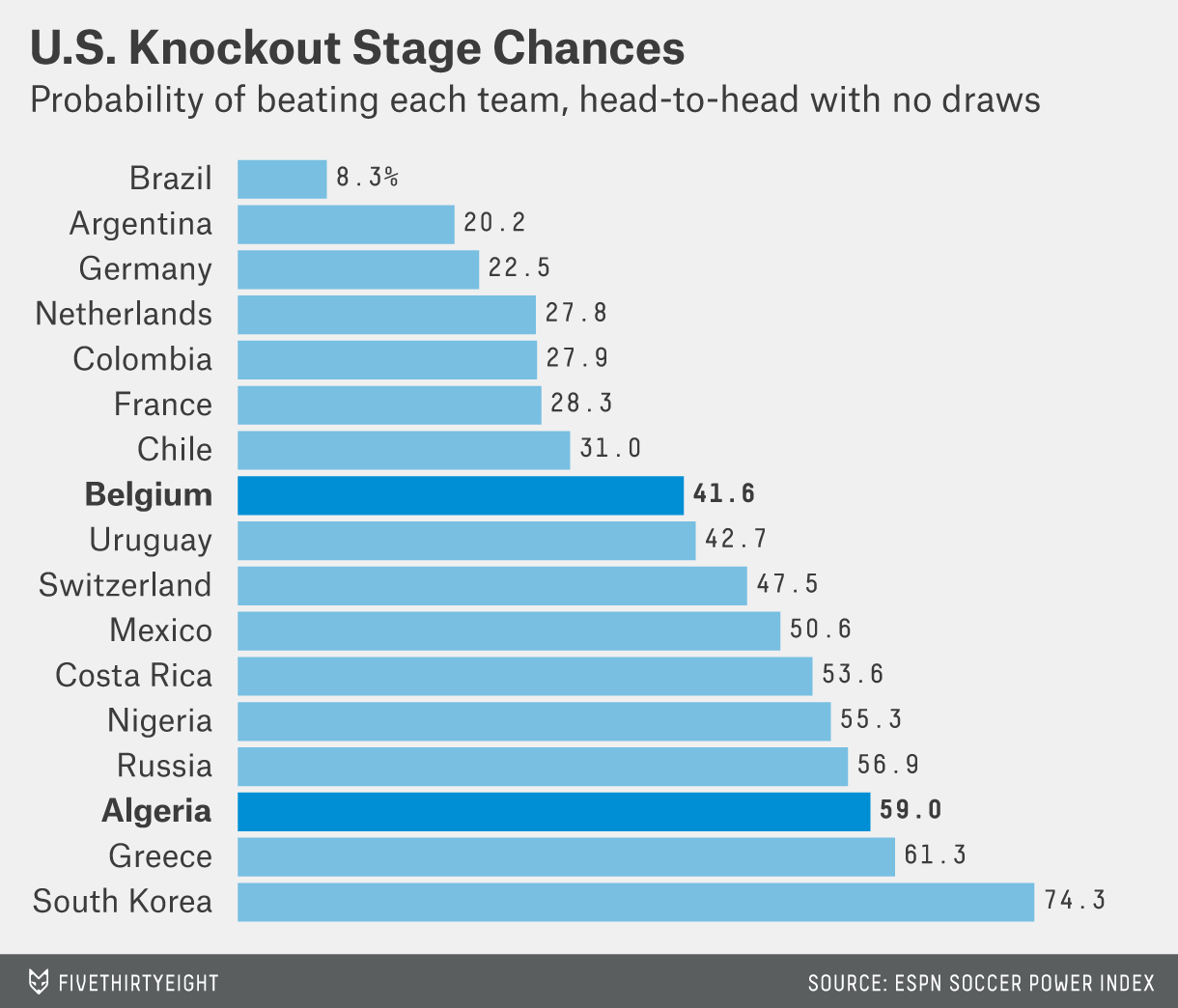 A note for soccer newbies: There are no draws in the knockout stage. If the score is tied at the end of regulation, the teams play 30 minutes of extra time. (The 30 minutes are guaranteed; there is no longer any “sudden death” or Golden Goal rule.) If the score is still tied, the game goes to a penalty shootout. (Some soccer statisticians consider games that go to penalties to be draws for record-keeping purposes — but the winner of the shootout advances all the same.)

These probabilities reflect an improvement, which we’ll be unveiling Friday morning, to the SPI match-prediction program. Previously, it had been resolving all matches that would have been draws in regulation 50-50. In other words, it was assuming that the outcome of a game that went to extra time was purely random.

We’ve done some further research, however, and this assumption turns out be somewhat too conservative. Based on the results from major tournaments since 2005, the better team does have a slight edge in extra time. It isn’t much of an advantage if the teams are at all competitive with one another: For example, if a U.S.-Belgium game went to extra time, Belgium would have a 54 percent chance of advancing either after extra time or on penalties, and the U.S. would have a 46 percent chance. But it’s worth worrying about when one team is clearly better. For instance, we estimate that Argentina would have a 65 percent chance of winning an extra-time game against the U.S.

Speaking of Argentina, it represents the biggest barrier to the U.S. making a deep run in the World Cup. The Argentines are the Americans’ most likely opponent in the quarterfinals and the U.S. has only a 20 percent chance of beating them. The U.S. will want to root for Switzerland to upset Argentina in the Round of 16 — against the Swiss, the Americans would be almost even money.

Overall, the U.S. has a 13 percent chance of winning two knockout-stage matches and advancing to the semifinals for the first time since the 1930 World Cup. Its probability of winning the World Cup is only 1.2 percent — although those odds are up from just 0.4 percent before the tournament began.