The Supreme Court’s rulings on a pair of landmark cases on Wednesday, which overturned the federal Defense of Marriage Act and effectively legalized same-sex marriage in California, are the latest in a recent series of legal and legislative victories for same-sex marriage advocates worldwide.

By Aug. 1, same-sex marriage will be legal in California, Delaware, Maine, Maryland, Minnesota, Rhode Island and Washington — all states where it was not legal one year earlier.

There are about 59 million people living in these seven states, which means that the availability of same-sex marriage in the United States as a percentage of population will have more than doubled within the year. As of early last year, same-sex marriage was legal only in Connecticut, Iowa, Massachusetts, New Hampshire, New York, Vermont and the District of Columbia, which have 35 million people among them. 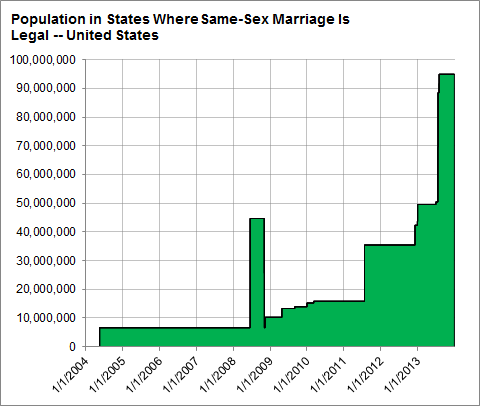 The availability of same-sex marriage is increasing almost as rapidly on a global scale. It was legalized in Brazil and France earlier this year and will become legal in Uruguay and New Zealand by August.

A decision last month by a Brazilian judicial panel that is generally seen as legalizing same-sex marriage, but could be subject to appeal, is especially important to this math. Brazil has a population of about 194 million — more than the combined 169 million in the nine countries in Europe where same-sex marriage is now legal. The most recent decision followed court rulings that had authorized same-sex marriage in more than a dozen Brazilian states. 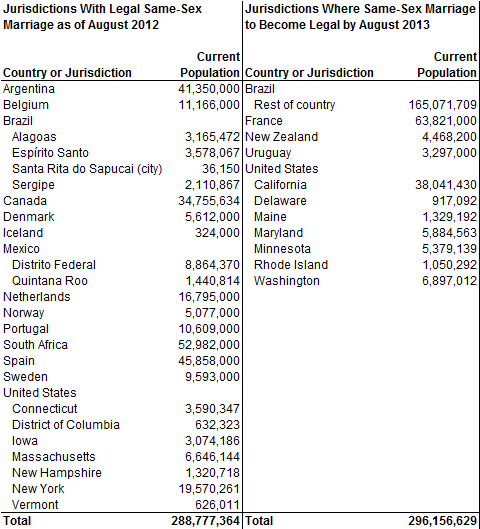 Earlier this year, France, with a population of about 64 million, became the largest European country to legalize same-sex marriage, and the largest in the world to do so by legislative action. 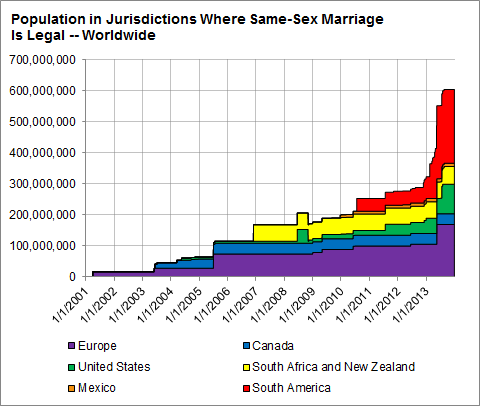 Still, that represents only about 8 percent of the global population. No country in Asia, which has well more than half the world’s people, has authorized same-sex marriage.

Instead, it’s the New World that has taken the lead. Of the 585 million people living in jurisdictions where same-sex marriage will be legal by August, about 360 million are in the Americas.